Thanks to an introduction made by Canadian distributor Audio Alliance, Accuphase Laboratory was the first stop on my January 2020 trip to Japan. Traveling from my hotel in Tokyo’s bustling Ueno area in the Taito district, I arrived at a local train station to meet Kohei Nishigawa, Accuphase’s international marketing supervisor. “I came to pick you up in the Accuphase car,” Nishigawa offered. Sure enough, he directed me to the station’s parking lot, where we got into a white Toyota SUV bearing orange Accuphase logos on its sides and rear. 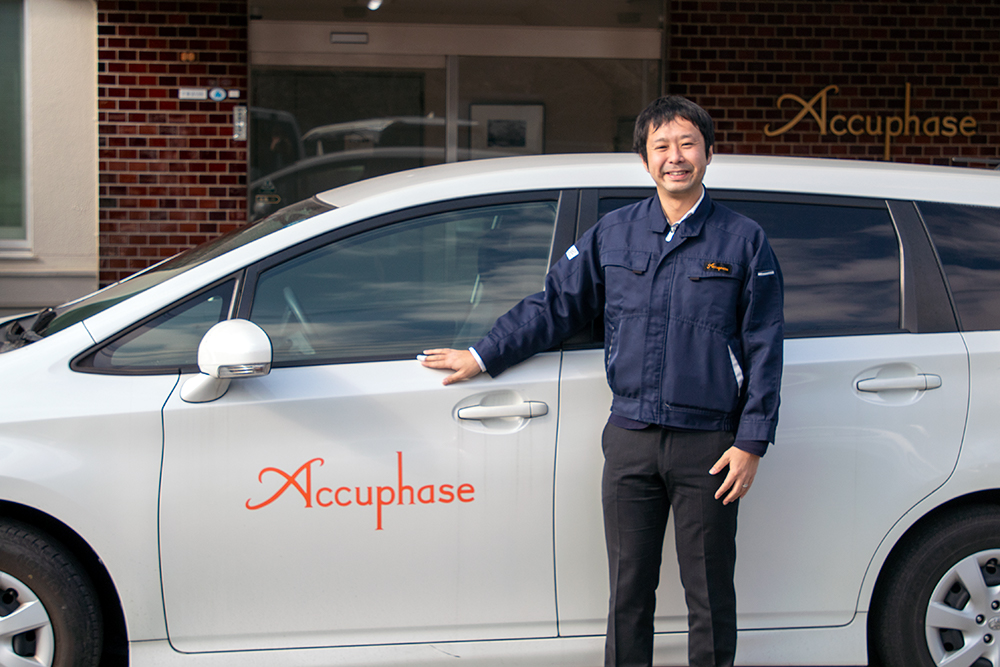 After a brief ride, we arrived at Accuphase’s corporate headquarters, factory, listening room, and warehouse, located in Yokohoma, the capital of Japan’s Kanagawa Prefecture. As we exited the SUV, Nishigawa pointed to a large building next to Accuphase’s current building that was under construction and mostly covered by a blue tarp. When completed in a few months, this new building will house a new state-of-the-art listening room and climate-controlled warehouse.

We then ran into Jim Saito, Accuphase’s affable chairman, who extended a warm greeting and invited me to take a look at the progress of the work on the new building. Even in its unfinished state, the building looked impressive. Clearly, Accuphase is planning for its future. 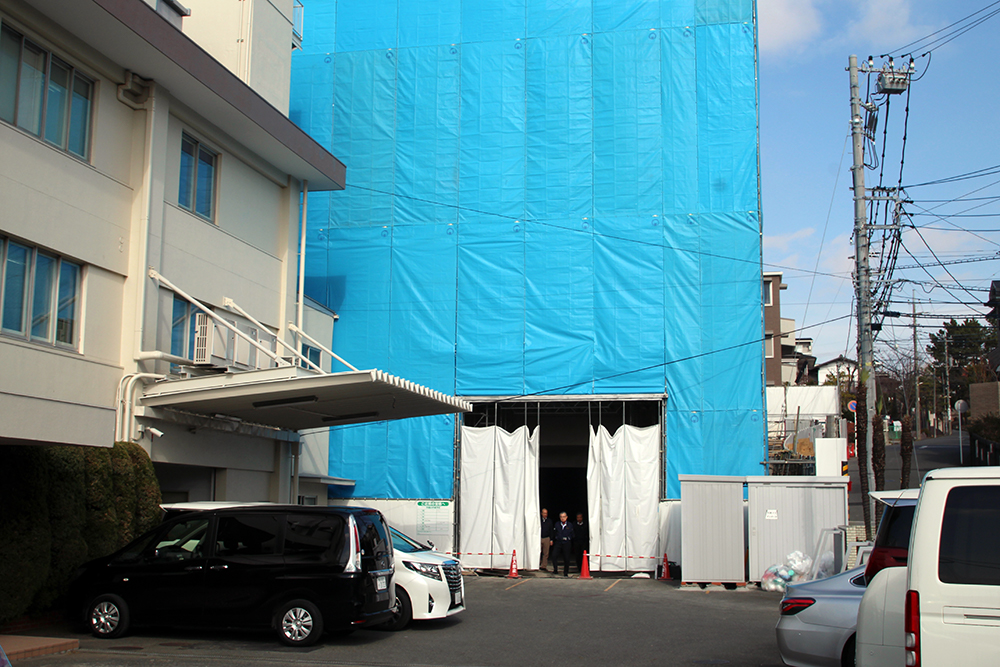 After saying goodbye to Saito, Nishigawa and I headed into a conference room in the existing building, where we met Mark Suzuki, an Accuphase executive vice president, and Tatsuki Tozuka, from Accuphase’s marketing department. We had only an hour before the factory’s morning shift would end, so we got right to the tour. On our way to the production line, we stopped in the surprisingly large design department, where about 25 of the company’s roughly 80 workers were busy working on future products, including those within the company’s four main categories -- stereo amplifiers, preamplifiers, integrated amplifiers, and CD/SACD players. 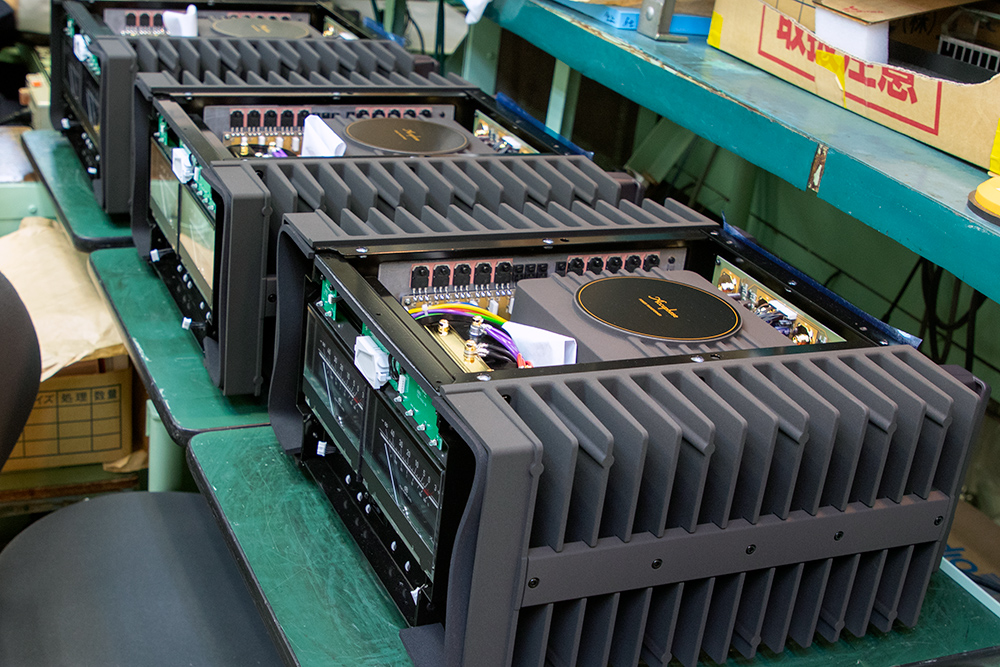 The factory area, which consists of about 17 technicians, is organized in assembly-line fashion. The production line contains a series of stations: main assembly and wiring; initial operational testing; continuous operational testing, where each unit is run for 24 hours; adjustment and performance measurement; external part mounting of panels, knobs, and covers; vibration testing, which determines whether vibration affects electrical connections or physical parts; operational inspection for factors like sound quality, display brightness, and switch feel; safety testing; shipping inspection; and packaging. 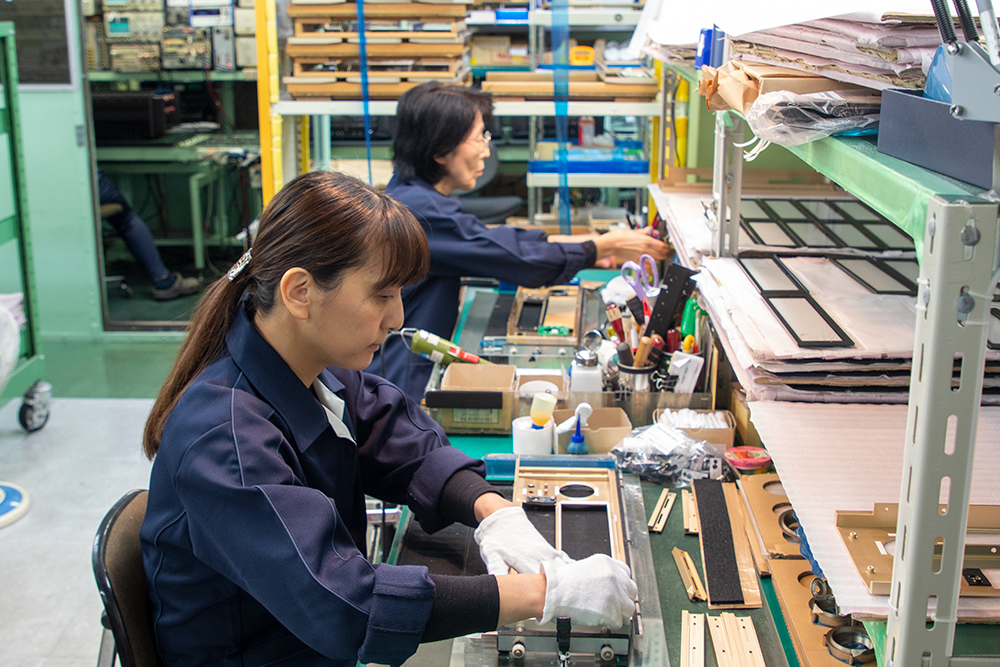 A lot goes on at Accuphase, but the factory is far from a mass-production facility that quickly churns out low-cost widgets. The components do not move down the line at a prescribed speed -- each one receives extreme care. In fact, production is limited to approximately 25 pieces per day, which works out to about 5000 pieces per year. At each station, one or two highly trained technicians take all the time they need to perform their manufacturing, inspection, and testing (including listening) work until each aspect of the component performs precisely in accordance with Accuphase’s exacting standards.

Nishigawa said that throughout the production line, the builders complete and test the components using all five human senses, which to my knowledge includes the sense of taste. When I later asked Nishigawa about this by e-mail, he replied that I should not worry, as the builders “do not lick or bite the [components] while they are [being] manufactur[ed], but . . . use all other senses to detect any small malfunctions or cosmetic failure.” 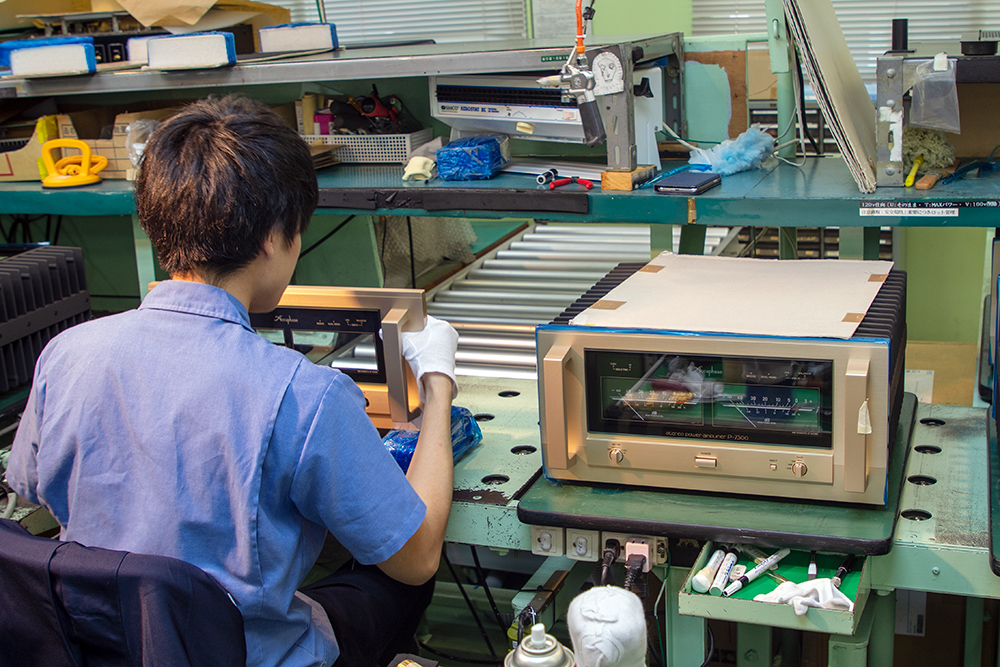 Seven additional workers are located in Accuphase’s repair department, including one who is known to be very knowledgeable about music, particularly jazz. Periodically, this individual gives a presentation to the other employees concerning a music-based topic. 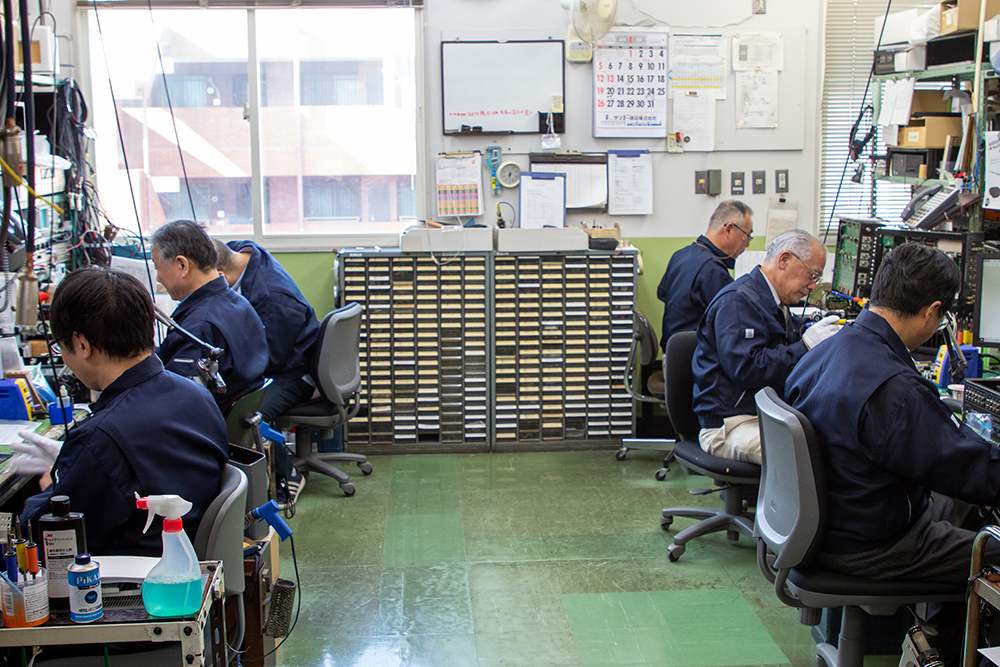 Touring the factory, it was not difficult to discern several overriding themes. The first theme is product build quality. Everything from the integrity of the electrical circuitry to the tactile feel of a component’s volume control mechanism and other switches, as well as the component’s aesthetic grade, are checked and rechecked. To further bolster build quality, Accuphase adheres to a “made in Japan” philosophy, only sourcing parts from suppliers with a Japanese manufacturing base or that use Japanese distributors that can adequately verify the quality of each part. Furthermore, no aspect of any Accuphase product is too small to consider. For example, the company spent much time and conducted many tests before it selected the appropriate cardboard and construction method for its shipping boxes.

Second, which is related to build quality, is quality control (QC). A dedicated QC department with three employees oversees the entire production process. According to Accuphase, this department’s procedures compare favorably to those of the world’s most demanding high-tech factories. As a key part of these procedures, a detailed history card is created at the time of production for all products, which facilitates the traceability of each operational or aesthetic issue to its source. 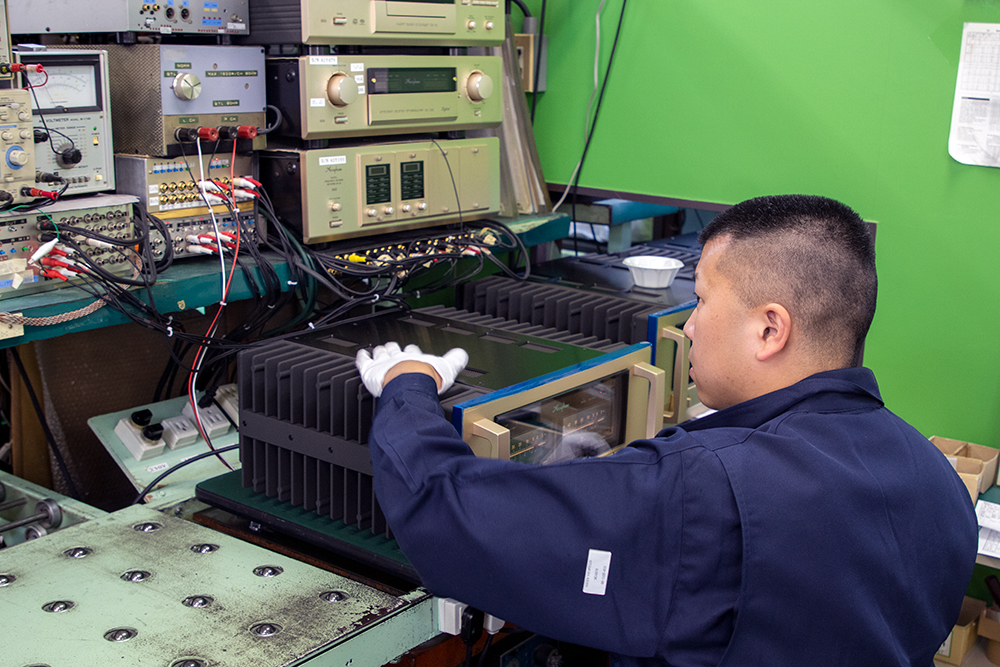 Finally, there’s a preoccupation with safety. The QC department ensures compliance with product safety standards that are said to well exceed those of the 60 countries where the company’s products are sold. Safety is also a paramount concern within the factory.

We then headed to Accuphase’s 15.5'W x 18.5'L x 10.5'H listening room. We traded our shoes for slippers, and I took stock of the room. The many components, held in racks that lined the sidewalls, were all Accuphase except for two turntables from Yamaha and Transrotor. The components we listened to consisted of a DP-950 CD/SACD transport ($32,500, all prices USD), a DC-950 digital-to-analog converter ($32,500), an E-800 integrated amplifier ($21,500), and several pairs of Accuphase SR Series interconnects and power cords (both not sold in the US). There was also a pair of Bowers & Wilkins 800 D3 speakers that were connected to the E-800 by Cardas Audio speaker cables. Acoustical treatments included panels on the walls and corner bass traps, all from Yamaha. The multi-paneled, slanted ceiling was designed to act as a diffuser. 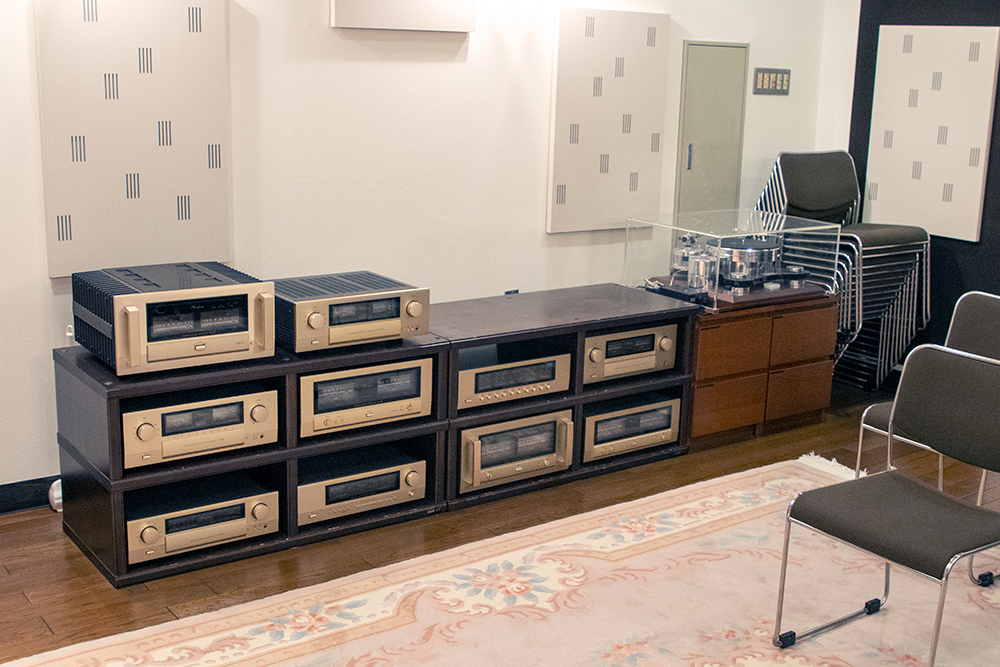 The electronics side of the listening room

My hosts played everything from Duke Ellington to Rachmaninoff. The sound was uniformly transparent, precise, and articulate, with excellent pace and an easy-to-listen-to natural character. The sound of the saxophone, for example, was characterized by a rich, effortless flow that was present even when the volume was turned up high. Overall, the sound was so good that it caused me to realize that, with some notable exceptions, the best sound that I’ve heard has often been at manufacturers’ listening rooms rather than dealer showrooms, event spaces, tradeshow rooms, or the homes of audiophiles. This might be because manufacturer rooms are often designed for optimal sound quality. 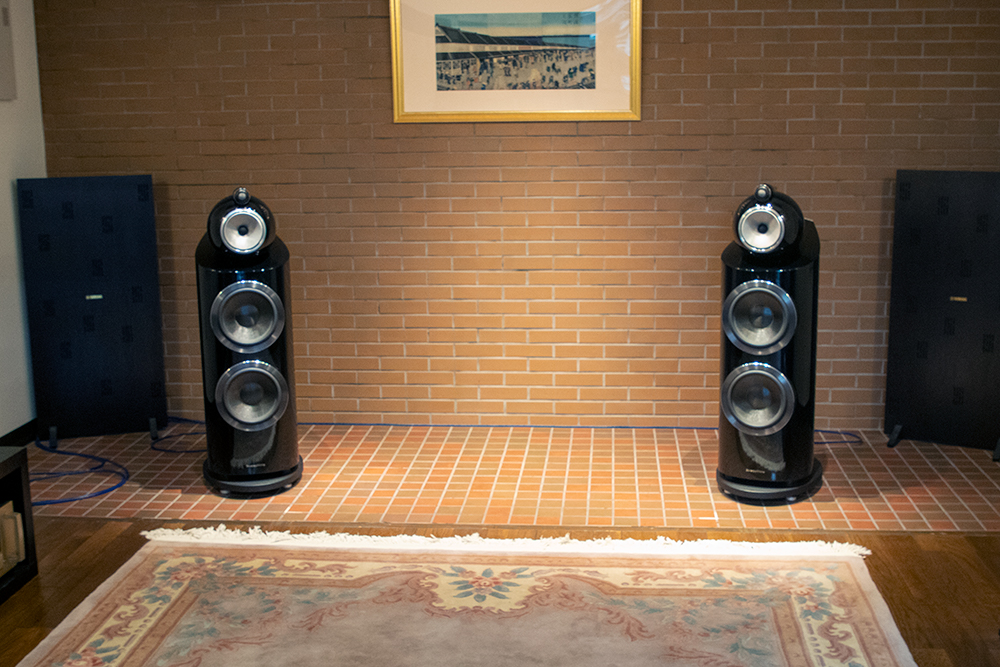 The speaker end of the listening room

Still, it was obvious that the Accuphase components were generating a unique and special magic -- one that could only be caused by top-shelf components no matter how good the room. In my mind, these components yield nothing to their worldwide competitors when it comes to sound quality. I also really dug the ultra-modern yet retro design of the components, which Saito thankfully told me will never change. 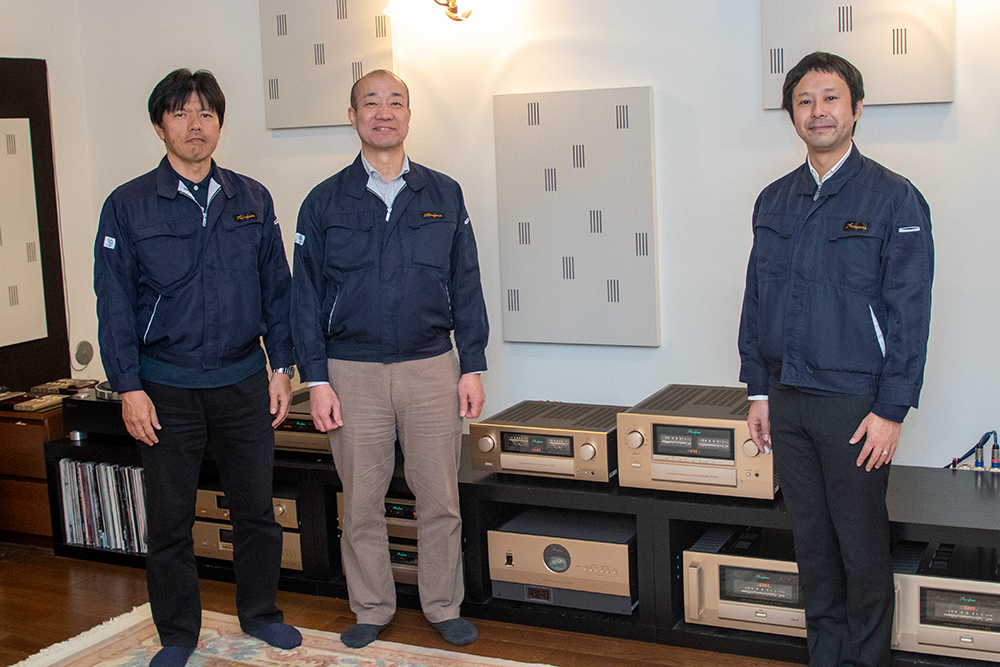 It was then time for lunch, so the four of us headed to the parking lot to get in the Accuphase car. Once outside, I was pleasantly surprised to be greeted by Saito, who stated that he would be joining us. Saito asked if I minded if we go to a Wagyu beef restaurant, as their sushi restaurant of choice was closed on Tuesdays. Having lived on sushi since my arrival to Japan, I replied with an emphatic “Let’s go, please!”

At the restaurant, Saito said that in 1972, brothers Nakaichi and Jiro Kasuga left what is now known as the JVC Kenwood Corporation to form a company, Kensonic Laboratory, that was dedicated to the manufacture of small runs of high-end audio components under the Accuphase brand name. At the time, there was virtually no Japanese company specializing in high-end audio. On Kensonic’s tenth anniversary, the company was renamed as Accuphase Laboratory (formed by combining the first part of the word “accurate” with the word “phase”), thus unifying the names of the company and its brand. The new name, difficult to pronounce by most Japanese audiophiles, was often believed to belong to a foreign company. 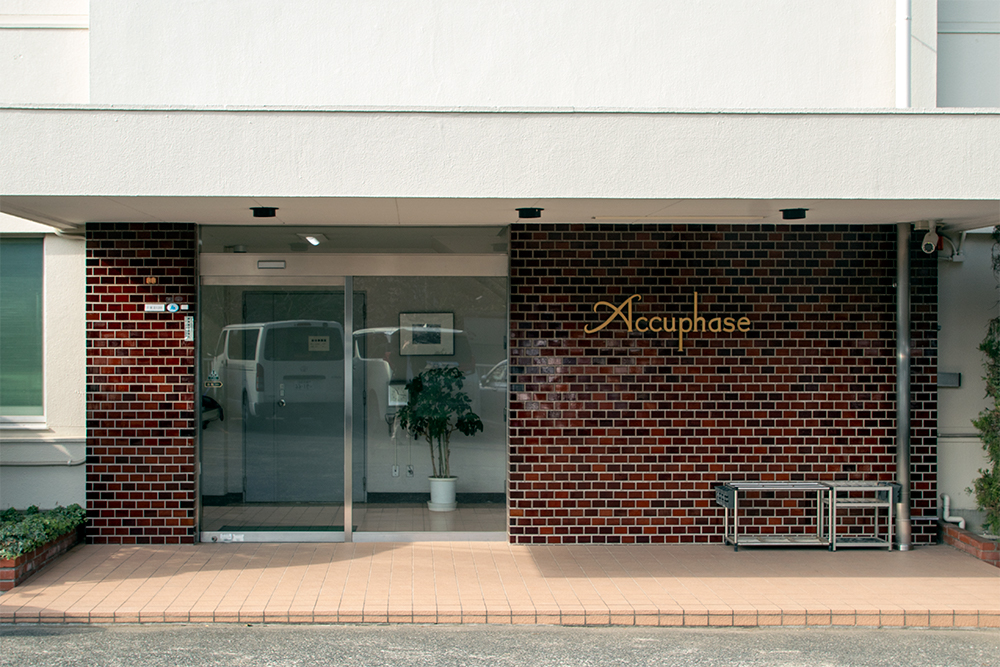 Saito also told me during lunch that Accuphase’s sales are currently 60 percent in Japan, with the remaining 40 percent elsewhere -- mainly Germany, China (including Hong Kong), France, Vietnam, Italy, and Switzerland. North America, he stated, constitutes only a small part of the 40 percent, but represents a growth opportunity.

Surprisingly, Saito told me that Accuphase is not looking for significant growth and that making money is not very important to him or the company. He noted that employee count is the same as when the company was founded. He also stated that although the new building will house a listening room and warehouse, production will remain in the existing building and not be increased. 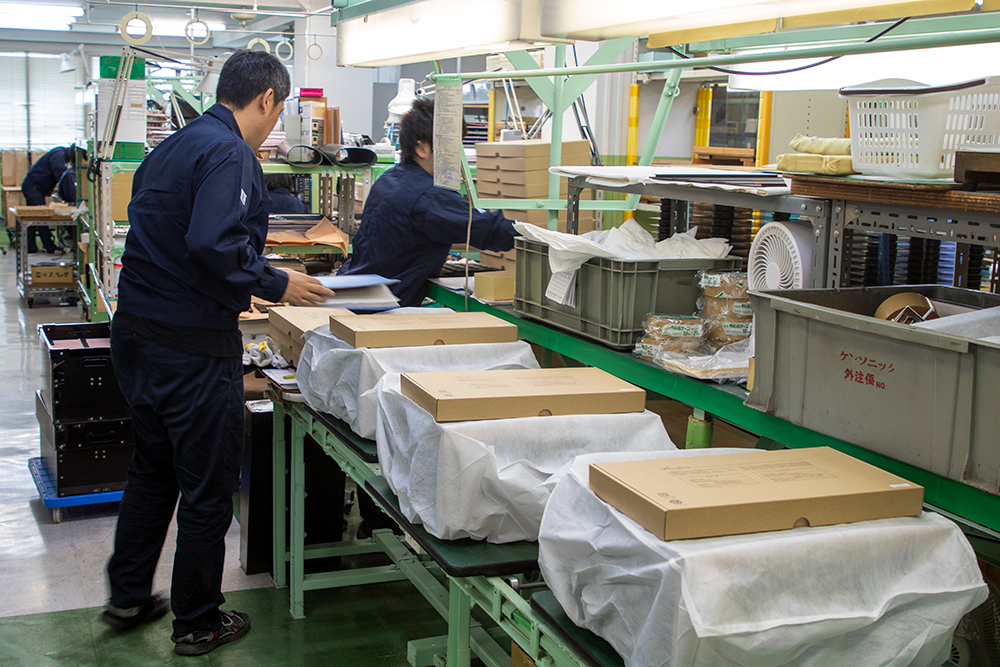 What is important, Saito emphasized, is making the best products possible, as well as the welfare of Accuphase’s employees. This seemed to be confirmed by anyone I spoke to at the company. Uniformly, they told me that management is concerned about such things as work-life balance and employee happiness. That was something I was pleased to hear about. Oh, and the Wagyu beef? Very highly recommended.

After lunch, we headed back to Accuphase, where Suzuki, Nishigawa, and Tozuka answered the many questions that I had concerning the factory’s operations. At that point, the visit concluded and I headed back to Ueno, just narrowly beating the frenzied Japanese rush hour. 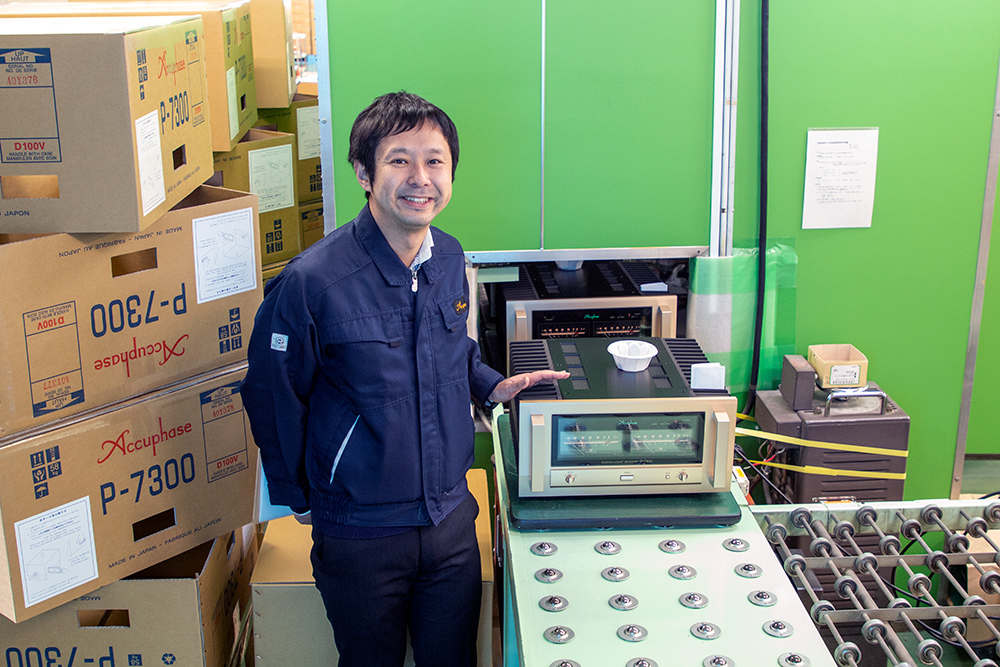 I have long admired Accuphase’s products, but prior to my visit, my knowledge of the company and its history was limited. That’s now changed, and my opinion of the company, already high, has only become more favorable. Stay tuned -- I plan on meeting with the company’s staff and visiting its room at the AXPONA trade show, which will be held in Chicago in April of this year. It’s pretty much a given that our show coverage will provide a full report on the latest gear from this much-revered Japanese company.