My visit to Esoteric’s Tokyo, Japan, headquarters and factory in January of this year not only promised to be interesting; it also offered a temporary respite from the harsh US Northeast winter. With Tokyo’s high temperatures logging in at a relatively balmy 45 to 60 degrees Fahrenheit, I left my winter coat at home.

Hiroyuki Machida, head of Esoteric’s product planning, picked me up at my hotel. We first visited the company’s headquarters in Tama-Shi, a city situated in the western part of the Tokyo metropolitan area. Located in a modern office park, this site houses about 35 design, management, marketing, accounting, and other corporate folks. 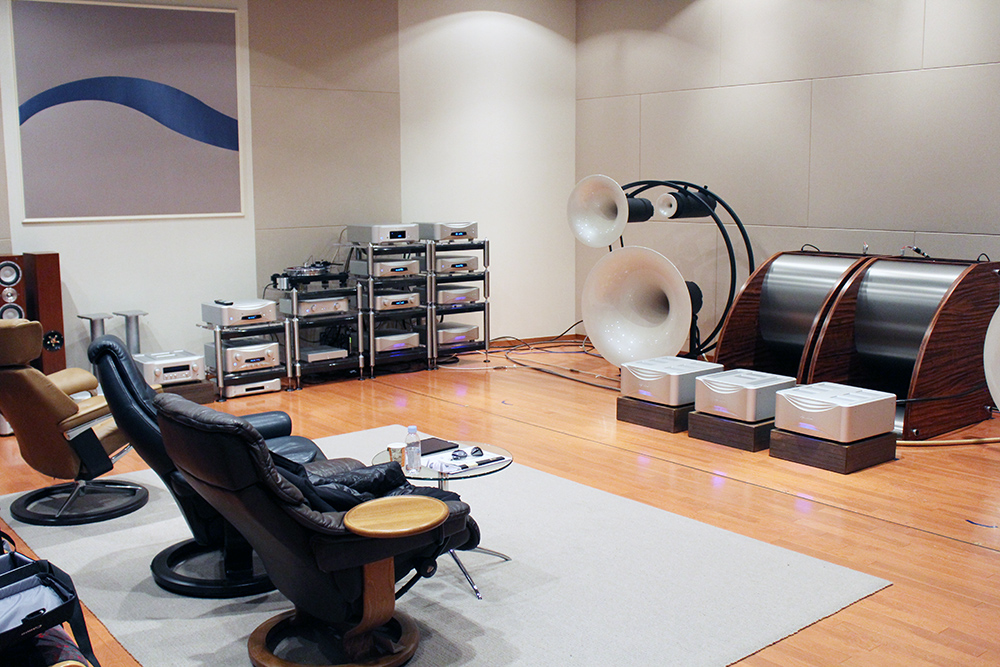 Once at the headquarters, I was escorted into Esoteric’s large, custom-built Master Sound Room. The sidewalls contained a seemingly endless number of silvery Esoteric components and a VPI Prime turntable, each supported by one of the many Grand Prix Audio Monaco modular racks. 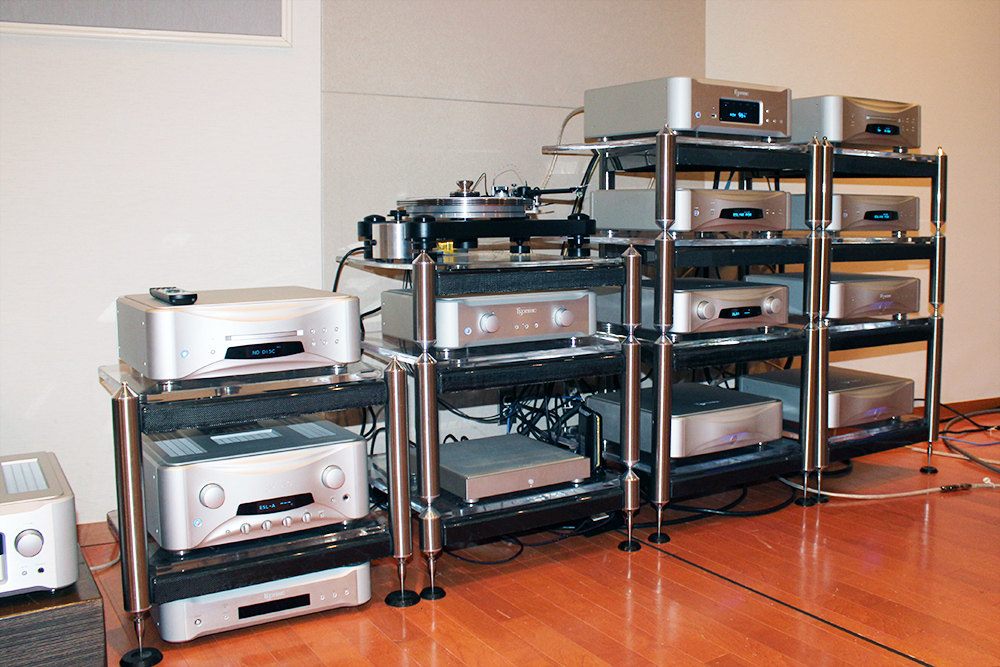 The sound lab’s side walls, one of which is shown here, were lined with Esoteric components

The speakers were Avantgarde Acoustic’s enormous and visually arresting Trio XDs, with the equally large Basshorn XD subwoofer. Not coincidentally, Esoteric’s in-house distribution unit carries the Avantgarde line. At the time of my visit, Esoteric’s top-dog stereo amplifier, the Grandioso S1, was driving the Trio XDs.

Also in the room were a variety of Esoteric artifacts, doubtlessly placed to impress, including an unfathomably thick, heavy, and gorgeously machined S1 faceplate and sample models of the company’s venerable CD/SACD transports. The faceplate’s stunning tooling demanded that it be ogled and touched. The heavy and equally well-crafted transports, dating from 2003 to the current production top-end VDRS-NEO, were equally demanding of close inspection. 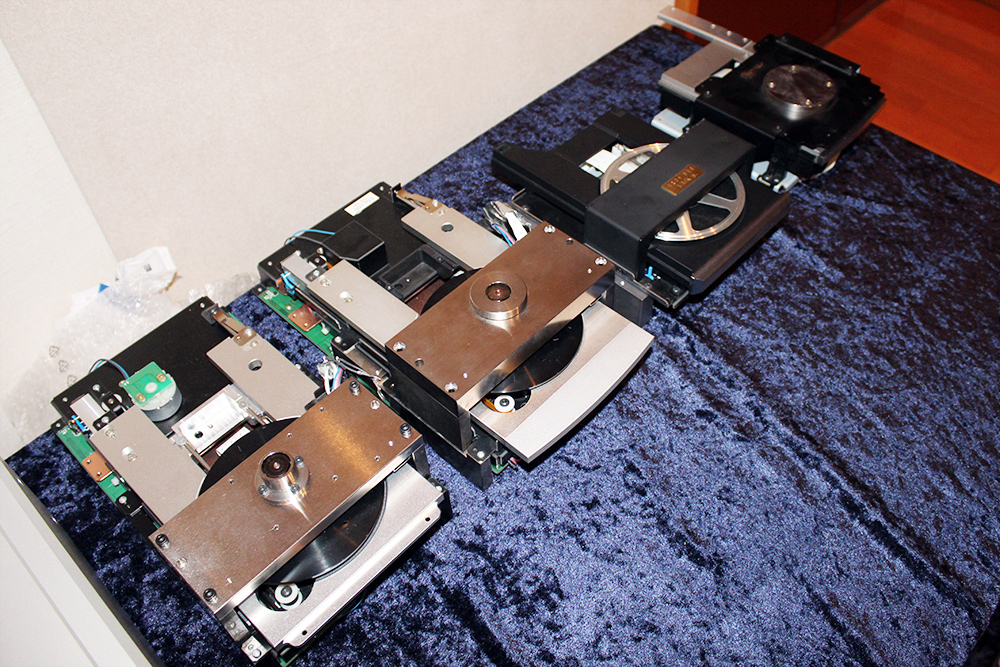 Four types of Esoteric transports, each of which is used in current models

Waiting for me in the sound room was, among others, Tetsuya Kato, the company’s head of product development. Kato has led the design of virtually every Esoteric product introduced over the past 18 years.

After introductions and some small talk, we listened to music. Aided by the sound room’s superb acoustics and the extremely capable Avantgardes, the sound was among the best that I have ever heard -- large scale, transparent and open, and with uncommonly natural-sounding transients. Also noteworthy was the sound’s delicacy, including the manner in which, for example, every change in vocal intonation and articulation was seemingly rendered.

Tetsuya Kato with the Grandioso amplifiers

Afterwards, I spoke more with Kato, who struck me as a very open-minded designer, especially considering that Esoteric is known in some ways to be very conservative in terms of the products it makes. Kato told me that when it comes to sound quality, everything matters. Recently, he stated, he was testing whether power cord rigidity affects sound quality. He also said that he could design a class-D amplifier that would meet his stringent performance characteristics, but not many audiophiles would buy it, instead strictly demanding either pure class-A or class-A/B topologies.

Speaking of market demand, I mentioned to Kato that while Esoteric’s products are expensive, they’re not the most expensive out there. For example, I noted, Esoteric’s highest-performing amplifier, the Grandioso M1 monoblock, retails for a “mere” $44,000 USD per pair -- far less than the flagship amplifier offerings of many of the company’s competitors. According to Kato, those far more expensive components merely respond to a demand by some well-heeled customers for expensive trophy products and do not justify their enormous price tags with improved performance. 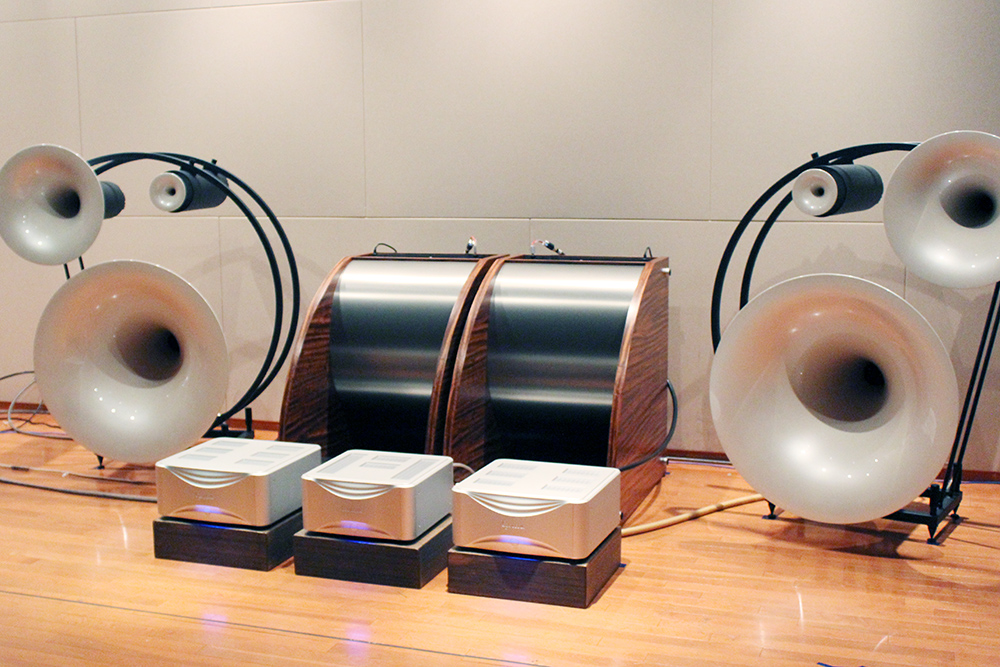 Next up, Esoteric’s factory located in Ome, Tokyo, about an hour and a half from the headquarters by car and a stone’s throw away from the enormous Yokota Air Base. Waiting to greet us at the factory was, among others, its head, Masaharu Ito. I was first escorted to a conference room to view a PowerPoint presentation of the factory’s ownership structure, history, and operations. In the room were numerous vintage radios and other electronic products built either by TEAC (Esoteric’s sister corporation) or its original founding name, Tokyo Electro Acoustics Company. (Esoteric and TEAC are each now subsidiaries of Gibson Brands, Inc.)

I learned that the factory, owned 70 percent by TEAC and 30 percent by Esoteric, is jointly operated by those companies and houses almost 100 employees. It’s a hotbed of high-tech manufacturing, producing a very wide variety of products for the medical, military, infrastructure, transportation, telecommunications, electrical grid, aerospace, and, of course, high-end audio fields. A source of particular pride is the factory’s production of extremely high-quality printed circuit boards, including those that are used in Esoteric’s components. 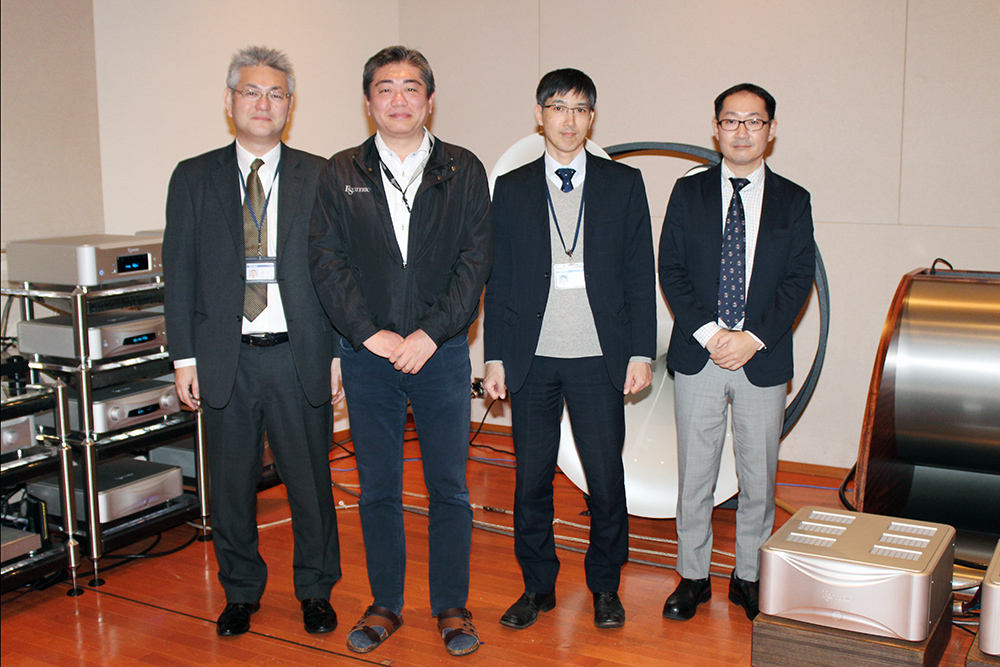 We then proceeded to the factory’s three floors, one each for PCB manufacturing, assembly, and packaging. I was provided a jacket, hat, and shoes so as to reduce contaminants in the clean room areas. A testament to the level of seriousness in which Esoteric approaches the manufacturing process, it’s not often that an audio manufacturer goes to the trouble of using a clean room. Below are photos from my factory visit. 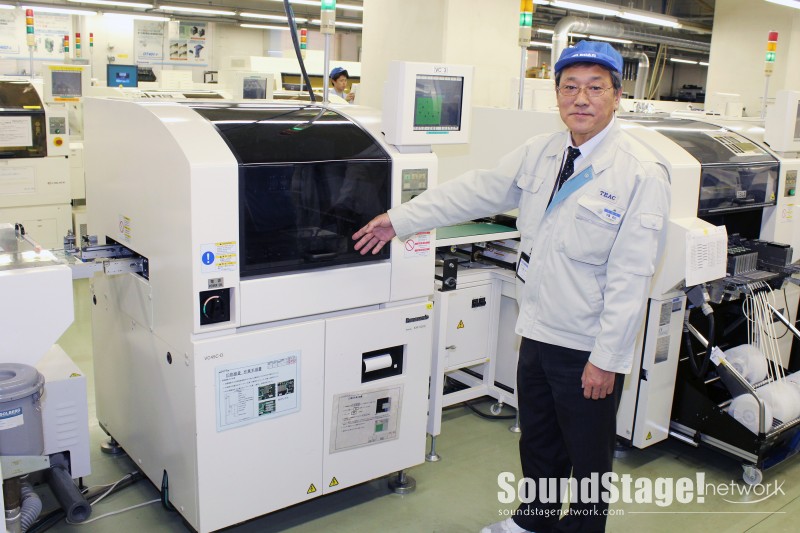 Masaharu Ito, the President of TEAC Manufacturing Solutions Corporation, (Esoteric’s factory), with one of the factory’s PCB-making machines

PCBs during the manufacturing process

More PCBs during the manufacturing process

Many of the PCBs are manufactured by hand rather than machine

When viewed under a microscope, the solder exhibits a very regular particle structure, which Esoteric states improves sound quality