Though I majored in history in college, I’m not the kind of guy who lives in the past. Growing up, I found it confusing when old people would play music from when they were young and then talk about decades past as if they were the golden years and the world had been going to shit ever since. Why? What was I missing? That crossed my mind when I unboxed Graham Audio’s LS5/9 loudspeakers recently ($6795 USD per pair). 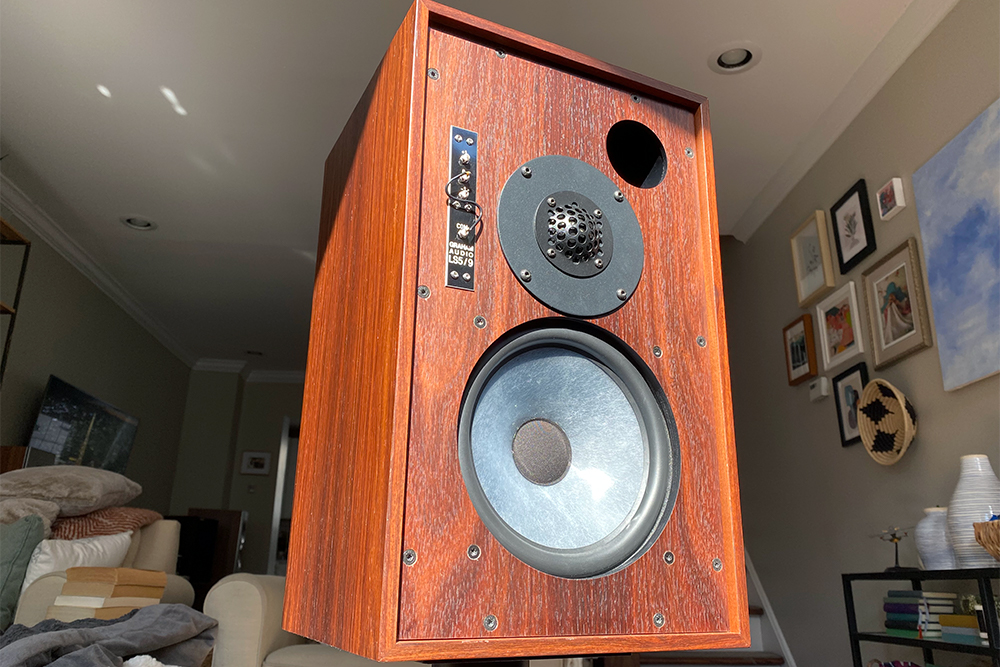 I’m 35, and the hi-fi of my youth was defined by products like the Bowers & Wilkins Nautilus 802 and 803 loudspeakers, and solid-state hardware from the likes of Mark Levinson and Krell. So, as you might imagine, the vintage-looking box made from 9mm-thick birch plywood did not necessarily set my pulse racing. Pulling the big two-way designs out of their boxes, I even thought to myself, “I am not the target audience for these things.” I had to take a step back and reframe proceedings. What if I were 18 years old in 1983 instead of 2003? Instead of CD jewel cases lining my bookcases, I might have had loads of vinyl sleeves. And instead of drooling over an English-made loudspeaker flying under the flag of John Bowers and Roy Wilkins, maybe I’d have been enamored with the British Broadcasting Corporation’s newest two-way: the LS5/9.

The LS5/9 was, of course, the BBC’s answer to the request for a loudspeaker that could play louder and deeper than the famed LS3/5A, the small studio monitor that the broadcaster used to ensure the quality of its productions. The LS3/5A was a watershed product for measurements-oriented loudspeaker design. The LS5/9 had to, among other things, have a maximum cabinet volume of 28 liters, be able to play 100dB when measured at 1m, and have the ability to “produce a sharply defined stereo image,” according to the BBC Research Department’s 1983 report on the LS5/9. 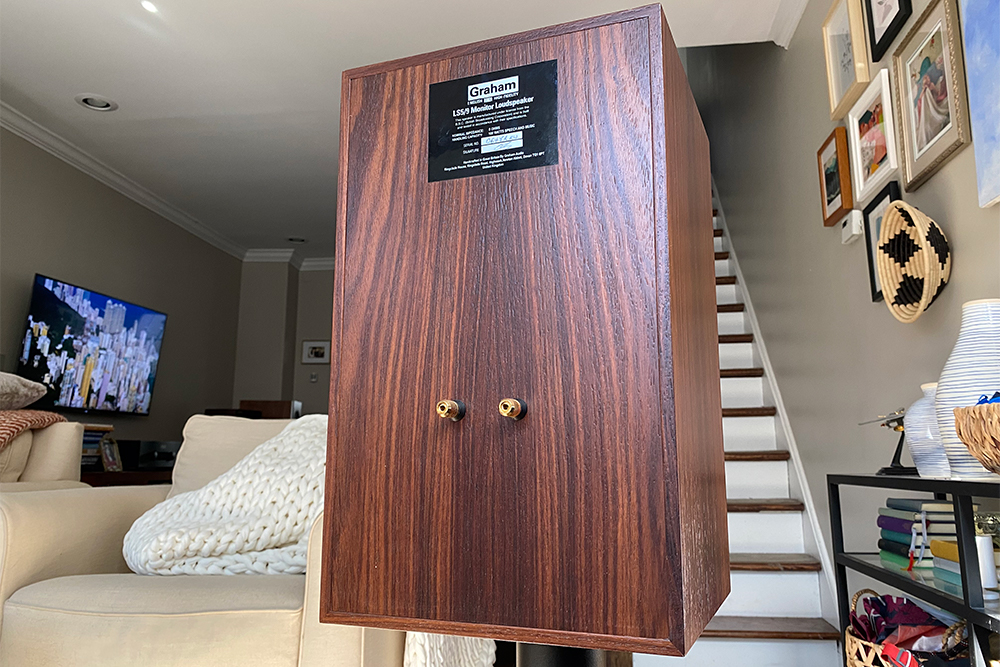 The recipe is pretty simple: a big, 9mm-thick birch—not MDF—box; an Audax soft-dome tweeter; and a polypropylene midrange-woofer. There’s a bass-reflex port on the front baffle, as well as jumpers that hint at the listener being able to tailor the tweeter’s frequency response by ±1dB. That said, the manual warns against it: “This has been set at the factory, and will not need adjusting during the life of the loudspeaker. Do not attempt to alter this setting yourself.” Duly noted. Out back is a simple plaque with product info, along with a small pair of binding posts. I normally bail on speaker grilles—I like the au naturel look—but I kept these magnetic grilles attached for the old-school British monitor look.

Graham Audio licenses the LS5/9 design directly from the BBC, and it’s currently the only company to do so. To be clear, this is not a modern reinterpretation of the original studio monitor. Rather, it’s an honest recreation of the original with a dash of modern finesse thrown at the crossover, as well as the polypropylene woofer, which is designed and manufactured by fellow English firm Volt Loudspeakers. That means the tweeter is the same unit as the original, which, at 1.33ʺ in diameter, is a bit oversized compared to most modern tweeters. The 7.87ʺ midrange-woofer is similar, but not identical to, the original. 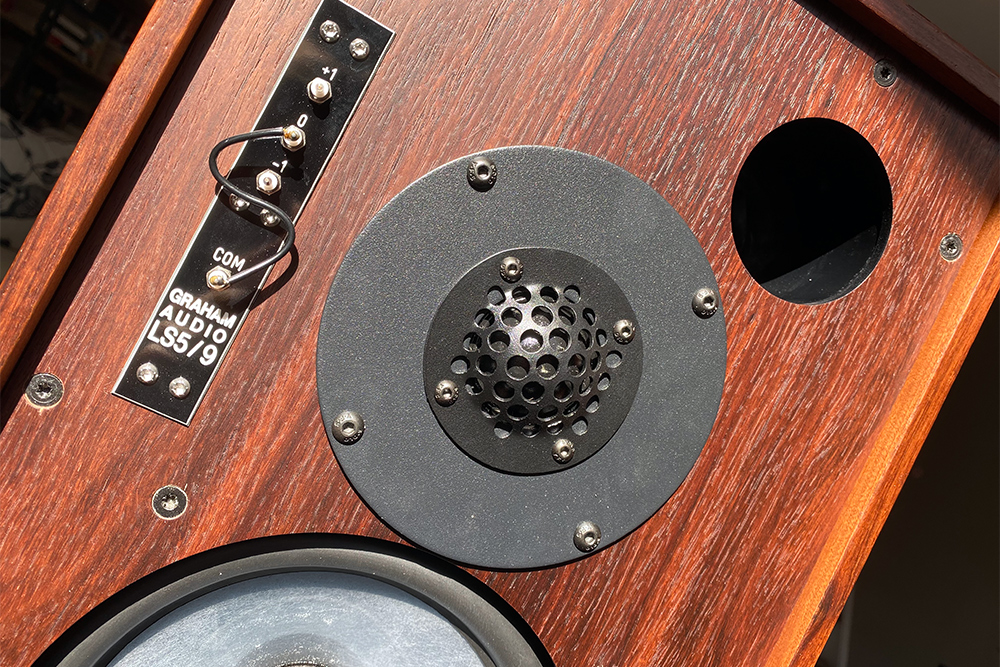 The 18.1ʺH x 11ʺW x 10.9ʺD LS5/9 is fairly big for a two-way stand-mounted loudspeaker, and while the pair worked on my bog-standard 24ʺ-high KEF stands, they no doubt would have preferred more purpose-built units. The standard Cherry finish costs $6795, but you must cough up $7545 for premium finishes like Walnut or the Rosewood finish that adorned my review samples. An even more premium Ebony finish can be specced for $8190. The Rosewood was attractive, with a slight glossy sheen and a textured finish to the touch. The cabinet exhibited a bit of hollowness when I rapped my knuckles on the top and side, though there is plenty of damping inside to ensure cabinet coloration is kept to a minimum. The look and feel are undoubtedly classic.

The legendary LS3/5A is a sealed nearfield monitor, meaning it should sing in a small, intimate listening space like an office or a recording studio. Position it free-field, a foot or more into a living or listening room, however, and the BBC proposition will make a lot less sense, sounding gutless and thin on anything other than simple vocal or instrumental fare. That’s where the LS5/9, with its bigger drivers, bass-reflex platform, and greater cabinet volume, comes into play, sporting a frequency response of 50Hz to 16kHz, ±3dB. The sensitivity rating of 87dB/2.83V/m and nominal impedance of 8 ohms, meanwhile, make the LS5/9 relatively easy to drive. After I positioned the Grahams where I’d normally place my reference KEF LS50 minimonitors, a foot from my front wall, six and change feet apart, seven and change feet away from my listening position, my Rosewood LS5/9 samples sounded delightful. 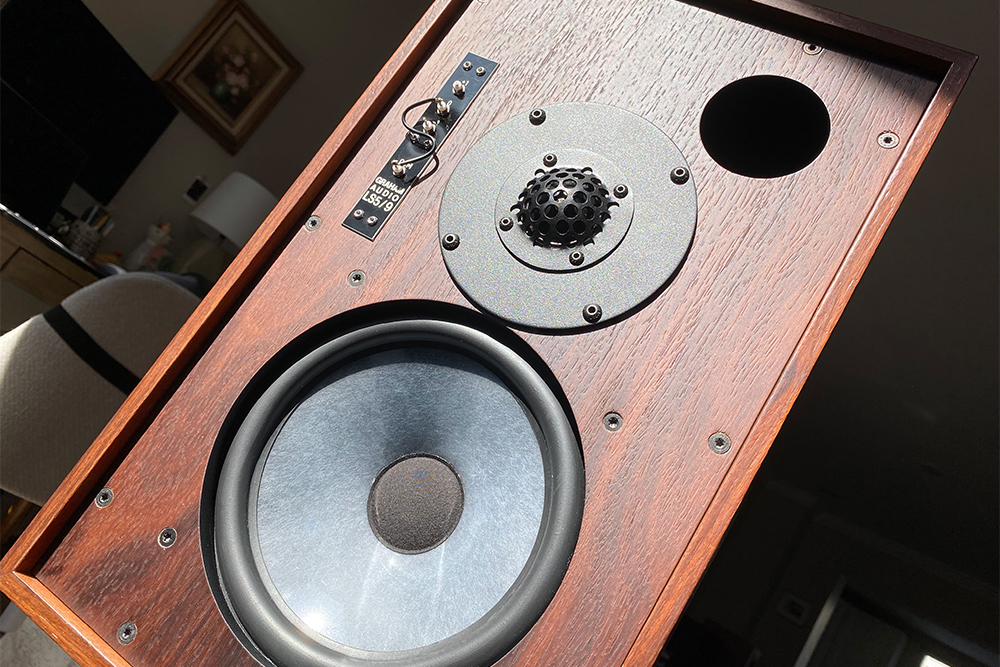 Genesis’s “The Brazilian,” off the English prog-rock group’s 1986 Invisible Touch (16-bit/44.1kHz MQA, Atlantic/Tidal), is a favorite of mine. The sweeping instrumental medley swings from wide orchestral melodies to percussive interludes over its 4:50 running time, and it needs to be played loudly. Off the bat, the LS5/9 does a couple of things just right. Tonally, this is a broadly neutral design, so don’t expect wide swings in frequency response. Yet it’s not totally neutral. Through my KEF LS50s, this track sounded a touch hollow—love those mid-1980s recordings—but to my ears, the LS5/9s added a little lower-midrange oomph that fleshed out the synthesizers, adding a touch of body and dimensionality that would otherwise be missing from a ruler-flat design. Accentuating that is the big 1.3ʺ soft-dome tweeter. I didn’t hear quite as much depth or air around instruments from “The Brazilian” as I expected, indicating a tapered and polite top end. Which was fine by me, as I appreciated this supple rendition from some of Surrey’s finest.

A more natural pairing for the LS5/9s might be “Don’t Panic,” the lead song from Coldplay’s debut album, Parachutes (24/192 MQA, Nettwerk America/Tidal). I liked the definition and texture of the guitar chords through the left and right channels to open the track with no undue warmth or smearing to speak of. Attack and decay were all very natural. The chords bookended Chris Martin’s clear, uninhibited central vocal. But be forewarned: the big BBC monitor doesn’t drunkenly swerve in the other direction, either. Guy Berryman’s bass guitar exhibited a little warmth and punch that helped punctuate the bottom end of the cut, but not enough to define the listening experience. It’s exactly this type of material that will shine through the big Graham monitors. 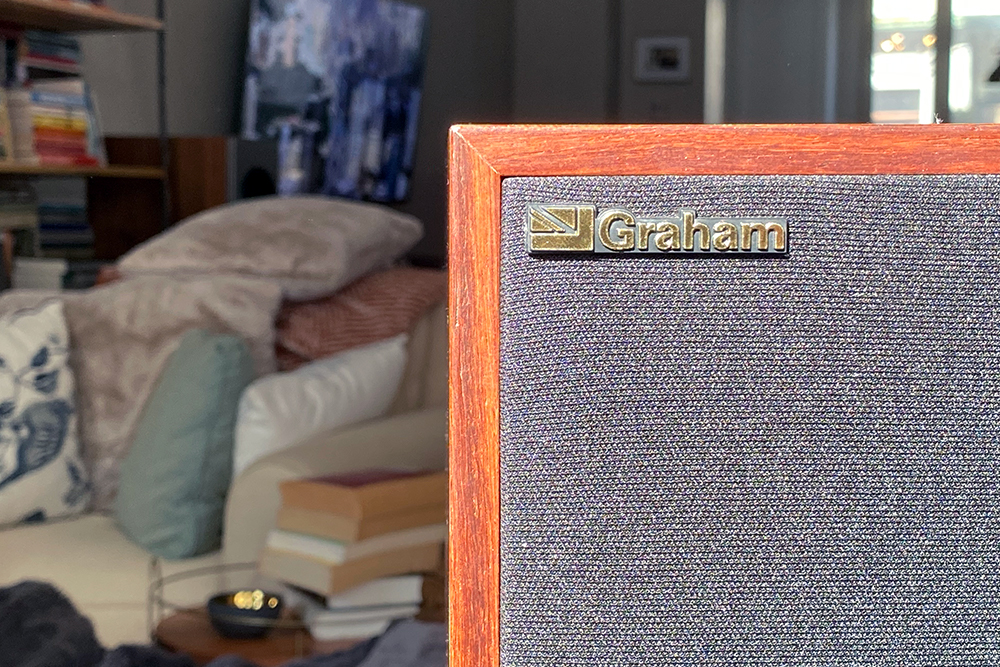 For around seven grand, yeah, there are other monitors that will unearth a little more low-level detail, and will create a more holographic soundstage. But will they look and sound quite like this? Only Harbeth’s C7ES-3 XD comes to mind, and that’s not officially licensed by the BBC. If you want the real, full-fat BBC experience, Graham’s LS5/9 offers a high-quality dose of audiophile history and nostalgia that you can’t find anywhere else.