A system is only as good as the room that it’s in, and as I explained in my last article, I’ve had some pretty mediocre rooms over the last decade. But my now-six-month-old daughter gave me and my wife an excuse just over a year ago to move from South Philadelphia to the Philly suburbs in search of additional space and more in the way of peace and quiet. One of my non-negotiables for our new abode was a finished basement that I could turn into a listening room, and after failing to land any of the first five homes we bid on in the historic pandemic housing market, we struck gold on our sixth and landed our dream home. 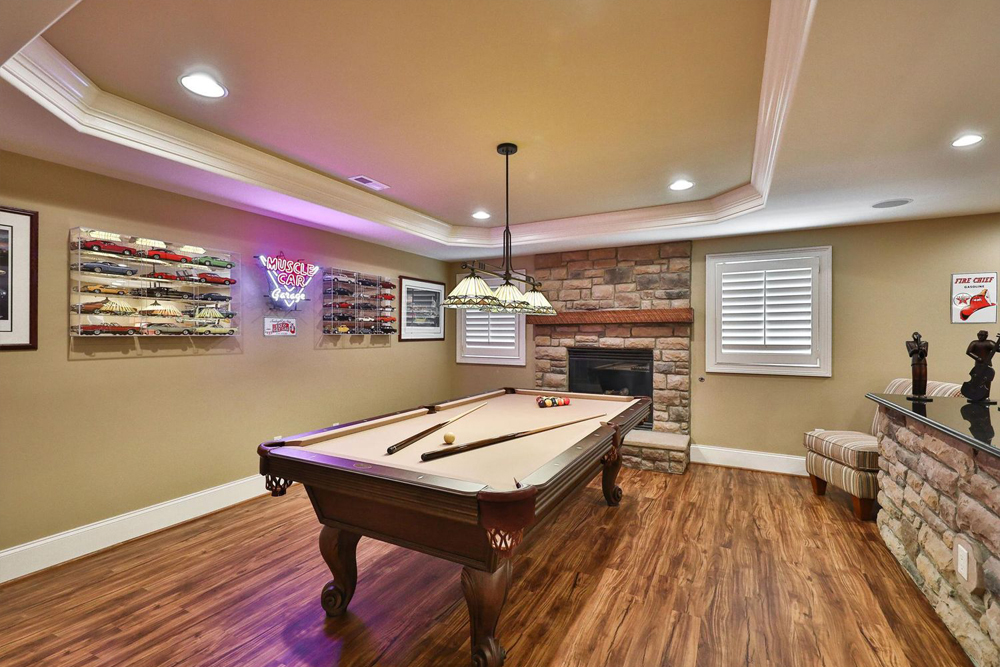 My new basement is interesting for several reasons. First, it’s monstrous, with an L shape that measures 29′ long and 37′ at its widest point, partially separated by a 3′-high stone dividing wall topped with marble. On the one hand, the square footage and layout would be great for a mixed-use arrangement, with my stereo on one side of the room and the built-in bar and another open space on the opposing side. On the other hand, the open format and massive dimensions would mean acoustic challenges in terms of both bass loading and reflectivity. I was confident that I could make it work, though, and it would still be a massive improvement over any of my old places. Thanks to supply-chain issues and a newborn, it took several months before everything came together, but the stars finally aligned, and I’m able to share the end result.

The semi-cordoned-off area measures 16.5′W × 14′L × 9′H, with that height due to a tray ceiling covering most of the square footage. The basement staircase partially lines one side of the space, and a stone fireplace flanked by windows with plantation shutters on either side occupies the other, resulting in first reflection points that I would charitably describe as suboptimal. Still, it represented good bones to me. It’s worth mentioning that I had no interest in creating an audio-only setup, an altar to fidelity with the obligatory Eames chair and ottoman, and the implied message that this was a haus of worship. 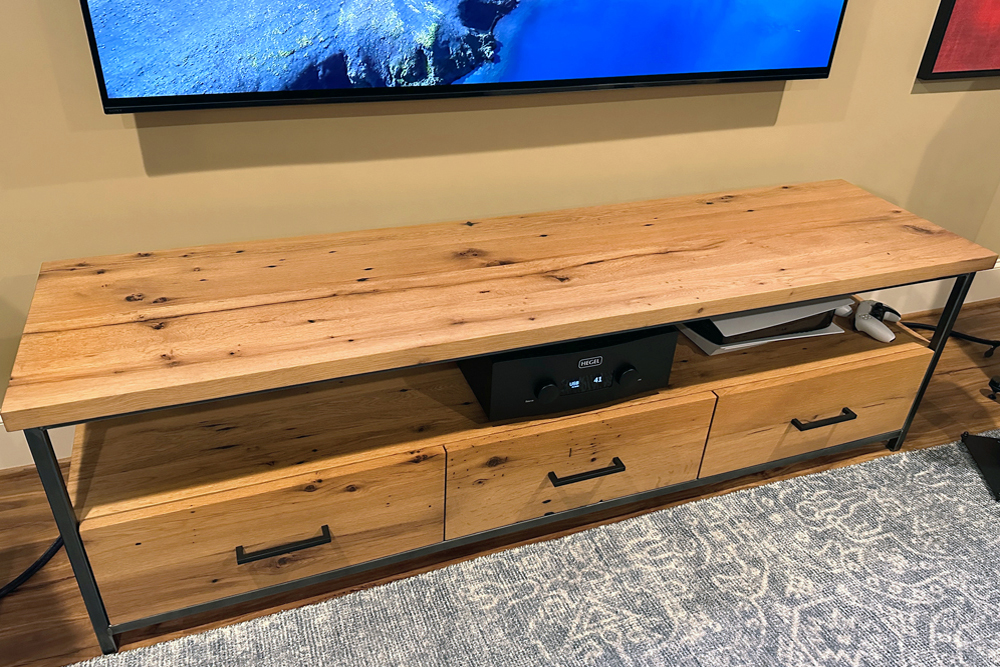 Accordingly, I didn’t buy a high-end audio rack with built-in acoustic isolation mechanisms, but instead had a media console custom-built by What We Make, a boutique furniture company from Algonquin, Illinois, that only works with reclaimed wood, much of it from old barns in the Midwest of the United States. I love reclaimed wood, as older wood tends to be sourced from old-growth trees, providing a heavier and denser end product than what you can buy from something like a Pottery Barn or West Elm. The darkened steel hardware lends a nice contrast to the clear-coated wood finish, and the dimensions were perfect for audio, measuring 80″W × 20″D × 28″H. It was wide enough to fit multiple pieces of review gear side-by-side, deep enough to accommodate most standard hardware, and high enough for two levels of hardware and decently sized drawers. I got the matching coffee table to really drive the blade into the delivery guys who had to maneuver these things down my switch-back staircase, as my highly strung, anorexic frame had no shot of making that a reality. The couch and chair are pieces that my wife and I have owned and used for years that fit decently with the decor, and in the interest of saving some cash I elected to keep them in service. 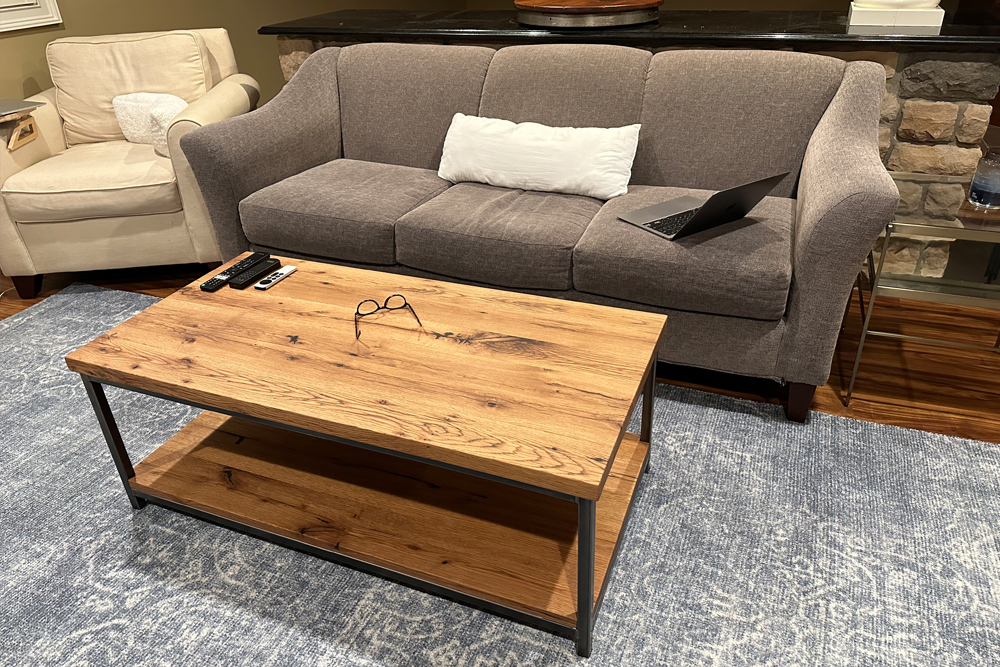 I wrestled for weeks over which television to buy, mining Best Buy reviews for their hard-hitting commentary and liberal grammar, as well as YouTube reviewers whose repertoire of adjectives sounded suspiciously audiophile-like. I wound up settling on a 77″ Sony A80J OLED, an outgoing model that the kind folks at World Wide Stereo—my local dealer—installed for me. They also wired ethernet cable to the front wall, allowing me to hardwire my Apple TV 4K, PlayStation 5, and Intel NUC running Roon. Once the gentlemen from World Wide Stereo finished up, I was able to reinstall my gear, which consists of KEF Reference 3 and LS50 loudspeakers, Hegel Music Systems’ H590 integrated amplifier-DAC, and a loom of Siltech Classic Legend cables. I also had a bunch of Audia Flight hardware in-house, including the company’s weighty flagship FLS10 integrated amplifier, which confirmed that my media console wouldn’t collapse with an 82-pound piece of electronics planted on it. Finally, I was able to ditch my trusty Emotiva CMX-2 power conditioner, as my new place doesn’t suffer from the electrical-hum issue that my century-old home in South Philly did. 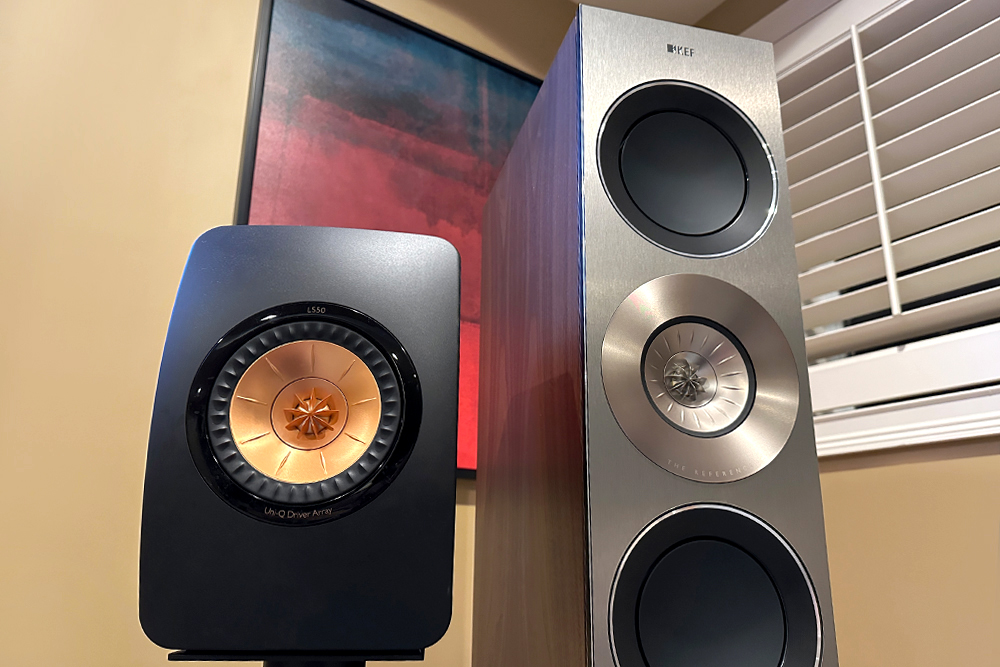 Let’s talk accessories. The entire house was painted in a shade of beige devoid of any personality, so I opted for a thick, pale blue rug with a distressed finish to give the room some character and to dampen it acoustically. And then I struggled deeply with how I wanted to adorn the walls. What did I want this room to say about me as a human being? I thought about movie posters, but that struck me as very college student on the low end, or home-theater geek on the upper end; would I also be purchasing one of those old-timey popcorn machines to emphasize that, boy, I really like movies? Also, I wasn’t convinced that posters for Star Trek VI: The Undiscovered Country, notable for Christopher Plummer’s Shakespeare-quoting Klingon antagonist, and Terrence Malick’s Tree of Life, a coming-of-age film set in the 1960s that preposterously features CGI dinosaurs, really captured my essence. I then gave serious thought to paying homage to my personal religion—football, erm, soccer—in part by putting up team scarves from all the stadiums I’ve been to over the years, similar to what SoundStage! publisher Doug Schneider did with skateboard decks in his listening room. But that felt both derivative and a bit tacky, as I knew the origins of these low-budget, highly flammable acrylic accessories were weathered, chain-smoking men in kiosks in Barcelona, Naples, and Rotterdam. Philip Morris would be proud of the amount of nicotine in these things, and I didn’t need my precious daughter getting hooked at a young age. 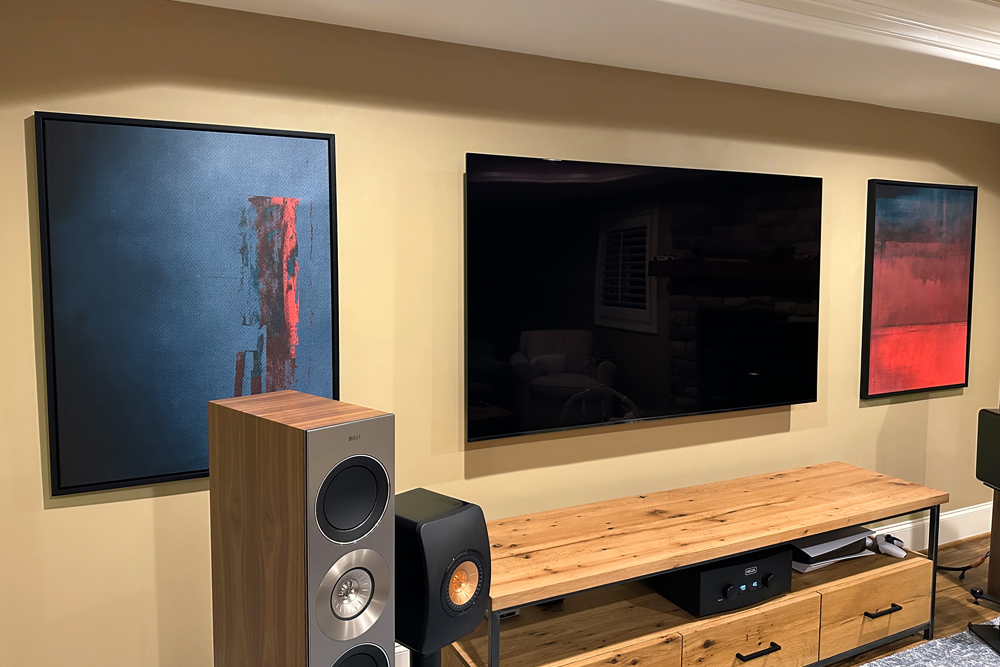 Ultimately, I picked the worst possible option for my dream listening room: colorful abstract art advertised to me through Instagram’s impossibly good algorithm. To be fair, the pieces look pretty good from a distance; just don’t look too closely, or the illusion that I have passable taste in interior design will come crashing down, as the prints aren’t the most resolving. I finished things off with five models, three of which I already had, and two of which I bought: a pair of pewter Star Trek ships from the Franklin Mint by way of eBay (the USS Defiant and the Future Enterprise), two 24 Hours of Le Mans–winning cars (a 1991 Mazda 787B and a 1995 McLaren F1 GTR), and a 1/350 scale replica of an American Ohio-class ballistic missile submarine. A friend of mine summed up the end result—and my soul—thusly: “Dude, I love your setup. It’s a combination of neat and unmoving that fascinates me.” No coming back from that one. 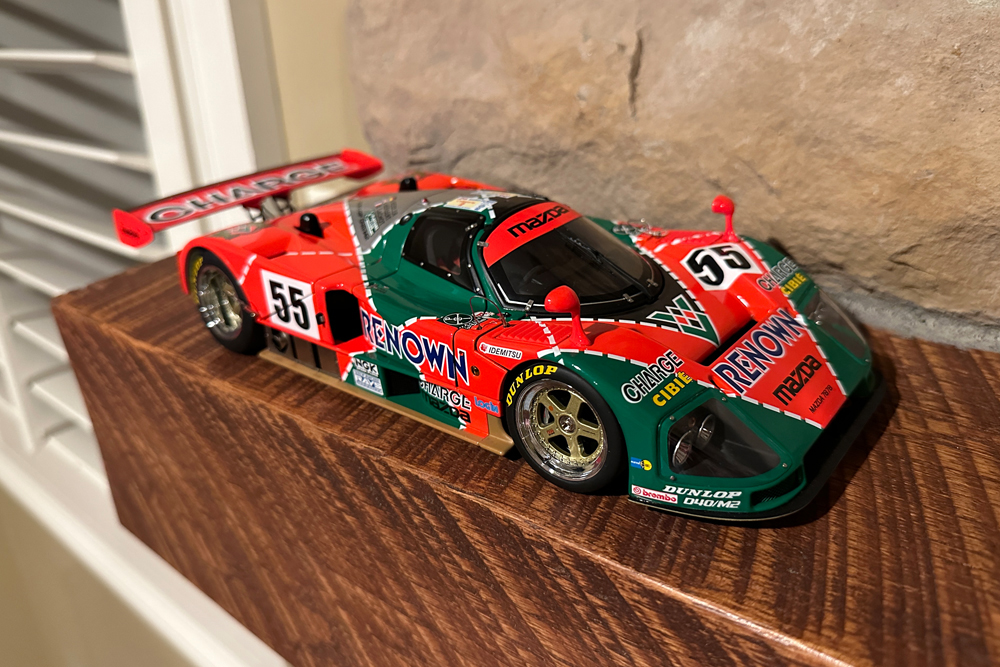 While I was vehemently against turning this into a dedicated audio room, I was certainly open to employing some form of room treatments to help make my space less reflective. So I turned to Vicoustic and its various residential- and professional-grade acoustic panels. I didn’t want—or need, really—the eyesore of big bass traps, nor did I have any interest in the textured diffusers that are so popular in high-end listening rooms and recording studios. Instead, I opted for Vicoustic’s Vixagon VMT panels in black. The combination of hexagonal and diamond pieces opened up interesting possibilities on the aesthetic front, and while they offer cool finishes including Natural Woods, Natural Stones, and Nature, the existing colors and textures in my room made those options feel a bit too busy. Same goes for the various solid colors that Vicoustic offers. I initially installed the panels on my ceiling using double-sided 3M tape and within ten days found most of them on my floor. It was then that I realized that Vicoustic recommends using its proprietary Flexi Glue Ultra, so I quickly ordered a box and set about reinstalling everything. Easy peasy, and I’m frankly thrilled with the result. I think the geometric patterns give the room a neat look, and they’ve definitely cut down on reflectivity. Mission accomplished. 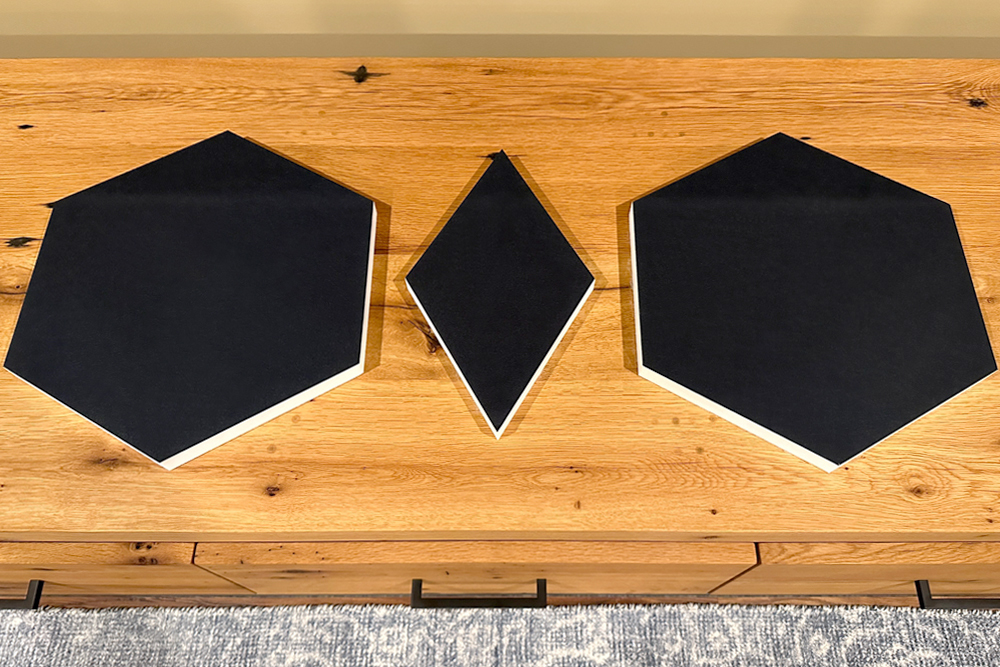 The end result? Well, I’m grinning like an idiot as I sit here writing this, so there’s that. I love how the media console and coffee table turned out, bringing a natural look to the room that combines well with the fireplace, the latter of which will be a joy to use as the weather gets colder. The colors in my janky internet art and new rug are a delight to me every time I see them. And then there’s the sound. I’ve gone from a room with awful bass modes—where my floorstanding KEFs would easily overload it with bass-heavy material—to one with very little bass reinforcement due to its expansive size, which has taken some getting used to. The relative linearity below 150Hz is almost disorienting compared to the massive peaks I used to hear in the 80 to 100Hz range. But my ears have slowly recalibrated, and I realize now how much more balanced my big KEFs sound. 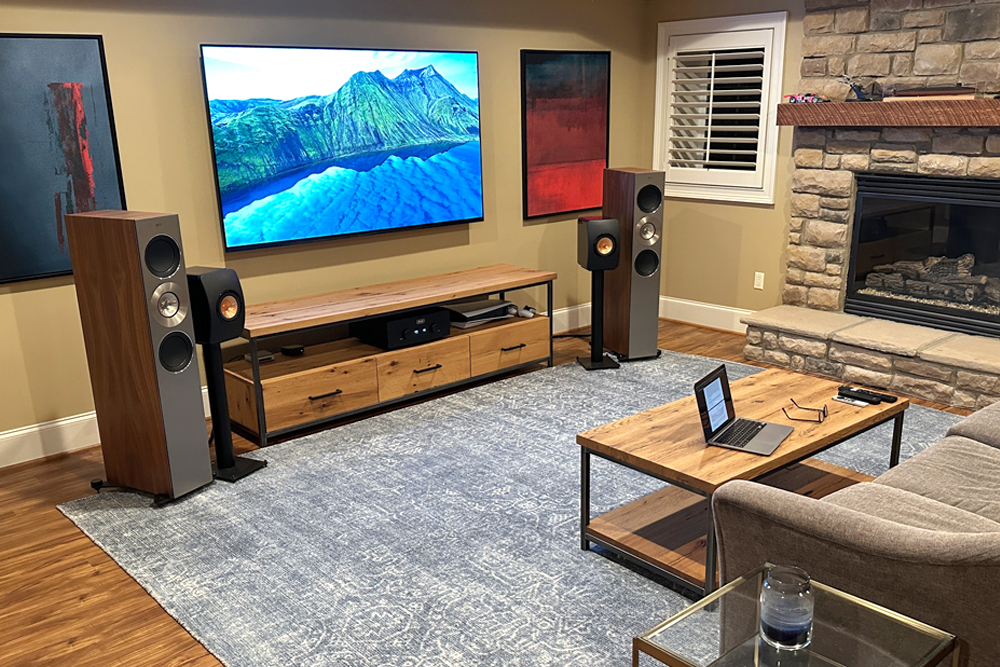 Speaking of my Reference 3s, it’s been a treat having the space to pull them out another few inches from my front wall, and to afford them equal lateral distance from their respective sidewalls, something I couldn’t do in my old place. Orchestral works and soundtracks sound huge now, with soundstaging increasing in every dimension, even vertically! And with another few feet now between me and the floorstanders in a true equilateral triangle, stereo imaging is the most convincing that I’ve ever heard from my system. After years of grief from Doug Schneider about purchasing speakers that were too big for my room, I may now be suffering from the opposite problem. And that is a welcome problem as far as I’m concerned. KEF’s new Reference Meta and Blade Meta offerings do look awfully tasty now that I think about it.

As for next steps, welp, I need to get back in the proverbial saddle. Between the move, the kid, and more going on at work for my wife and me than ever before, it’s been a crazy 12 months, but I’m determined to get more high-end equipment into my new room for evaluation. So much promising gear, never enough time.