Here’s the second part of my coverage of new speakers from the 2018 CEDIA Expo, which took place in San Diego, CA, USA. All prices in USD. You can read Part 1 here. 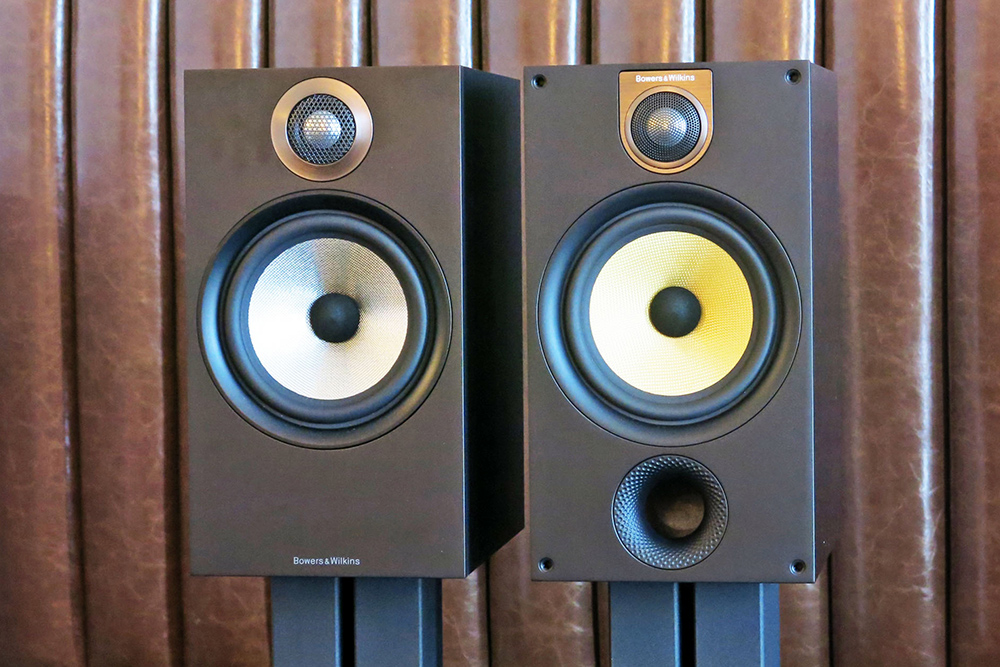 Bowers & Wilkins took over a large suite and three more rooms of the Pendry San Diego hotel to demo its already announced total revamp of the 600 Series of speakers. Shown here are the old 685 at right and the new 606 ($400 each) at left, which I got to hear compared side by side. According to the company, the two speakers’ frequency responses measure almost the same, but the added power handling and lower distortion of the new woofer make the 606 sound more dynamic. I agree -- I thought the 606, which uses the same Continuum woofer cone material now found in the 700 and 800 speakers, made the 685’s old-school Kevlar woofer sound overdamped and lifeless by comparison, and the 606 also seemed to have a more open, spacious sound. 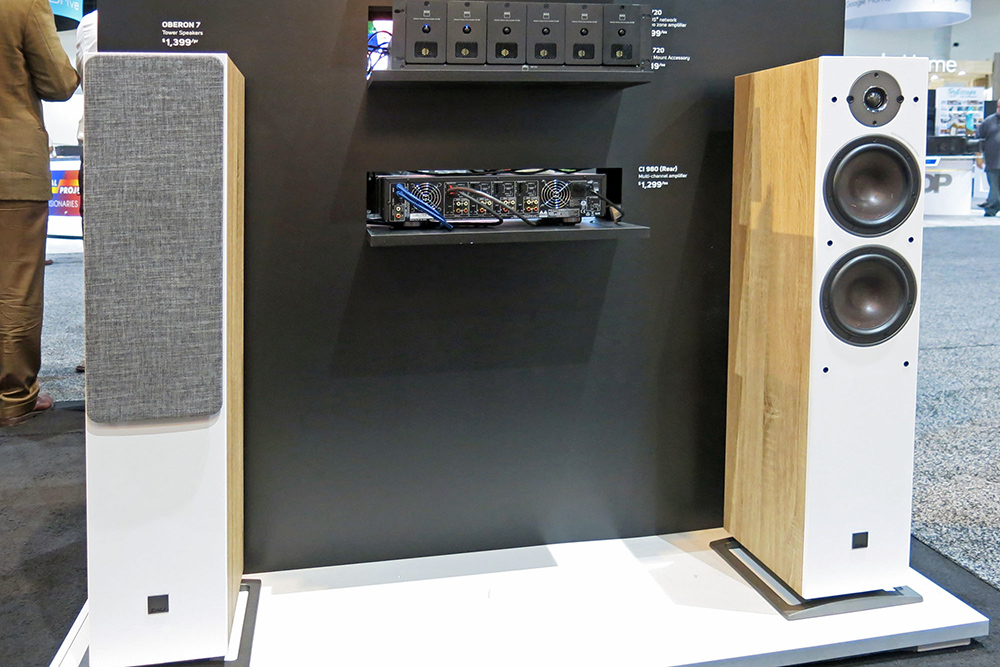 DALI’s Oberon line is designed to deliver high-end sound and attractive design to listeners on a budget. There are six models in the line: two towers, two bookshelf models, a center speaker, and an on-wall speaker. Shown here is the top-of-the-line Oberon 7 ($1399/pair), a two-way design with two 7" woofers and a 1.2" tweeter. 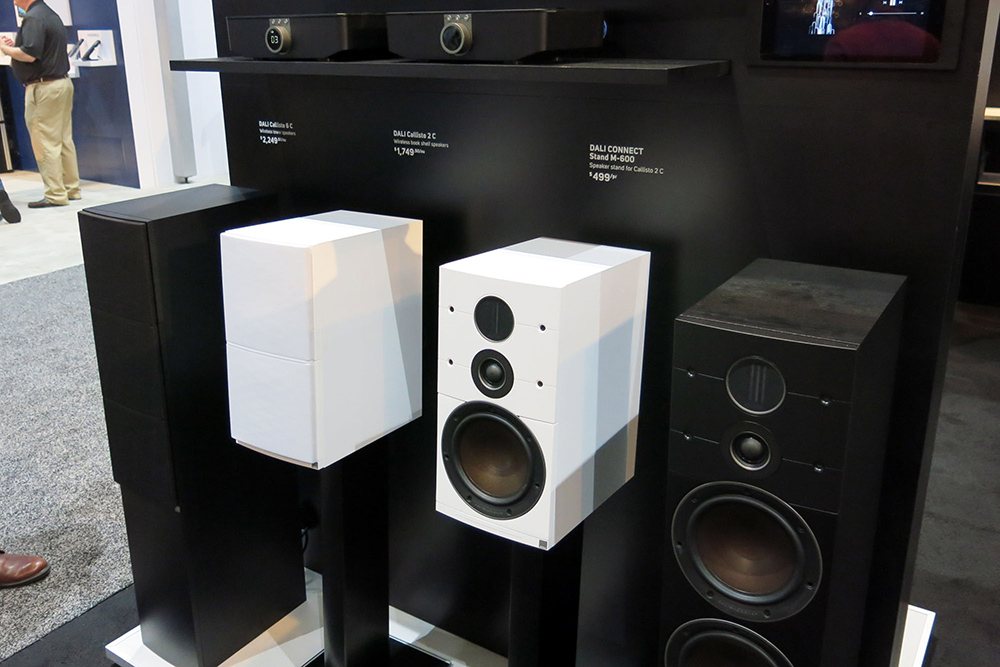 The DALI Callisto is a new, active speaker that uses the DALI Sound Hub ($799) to access different sources and control the sound. The Hub incorporates Bluetooth wireless, coaxial, and TosLink optical digital inputs, and an analog input, and it also accepts a module for the BluOS high-resolution Wi-Fi audio streaming technology found in many NAD products. Two Callistos are available: the 6 C tower speaker ($2249.50 each) and the 2 C bookshelf speaker ($1749.50 each). A full system with BluOS module runs $5750 for the 6 C and $4750 for the 2 C. 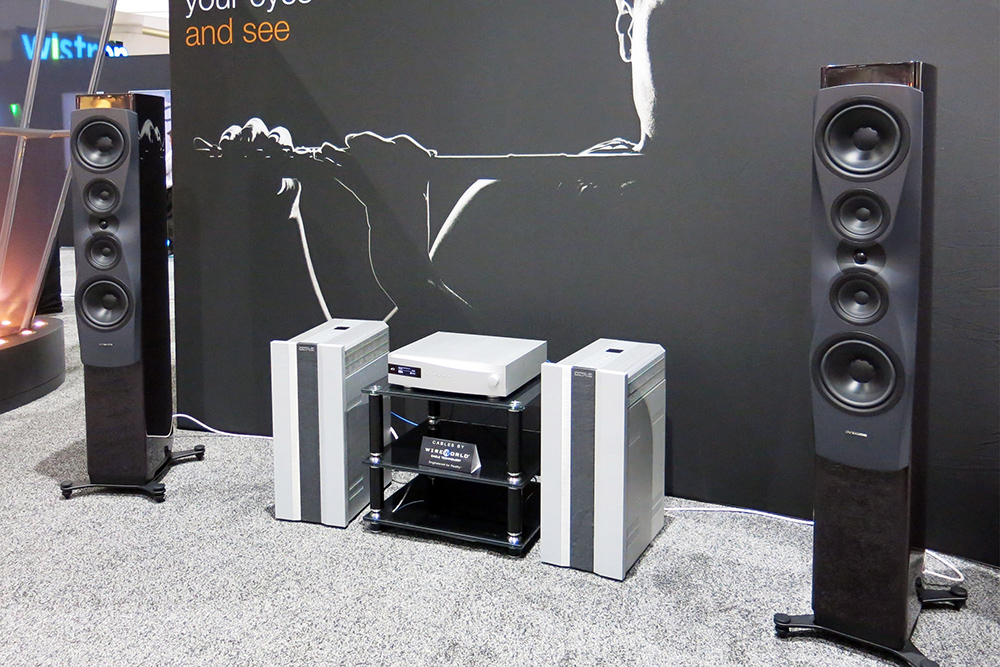 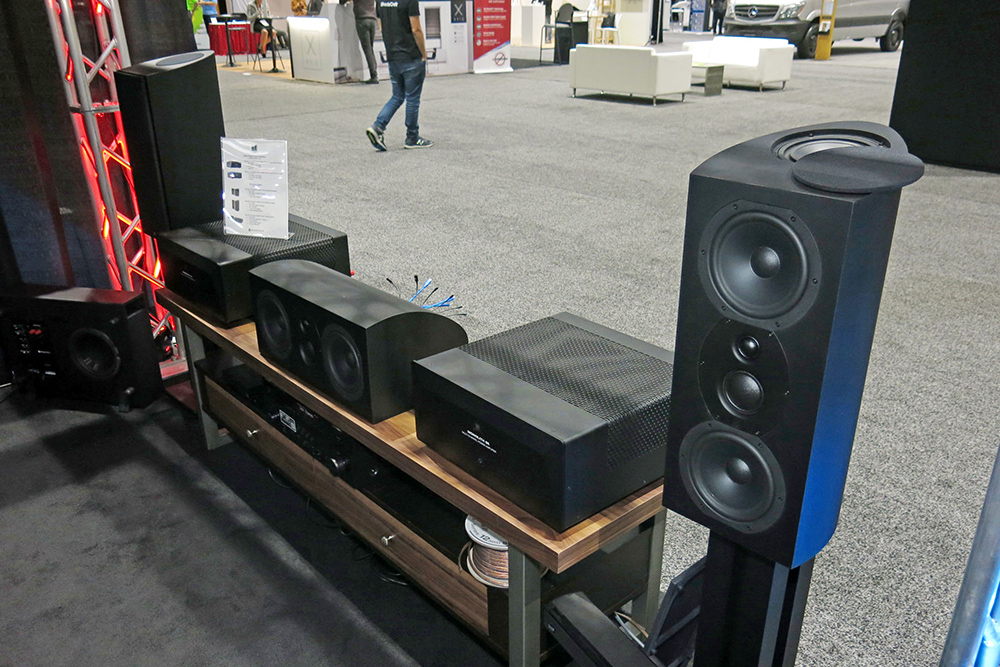 Considering that Monoprice already offers THX-certified subwoofers, I wasn’t surprised to see the company launching a line of THX-certified speakers to go with them. At right is the THX Ultra-certified Atmos Bookshelf Speaker ($499.99 each), which has two 6.5" woofers, a 2" silk-dome midrange, and a 1" silk-dome tweeter, plus a coaxial, upfiring Atmos driver with a 4.5" woofer surrounding a 0.75" silk-dome tweeter. A center speaker ($399.99), with the same driver array minus the Atmos drivers, is also available, as is the smaller, THX Select Certified Atmos Bookshelf Speaker ($349.99), with a single 6.5" woofer, a 1" silk dome tweeter, and the same upfiring Atmos driver array. 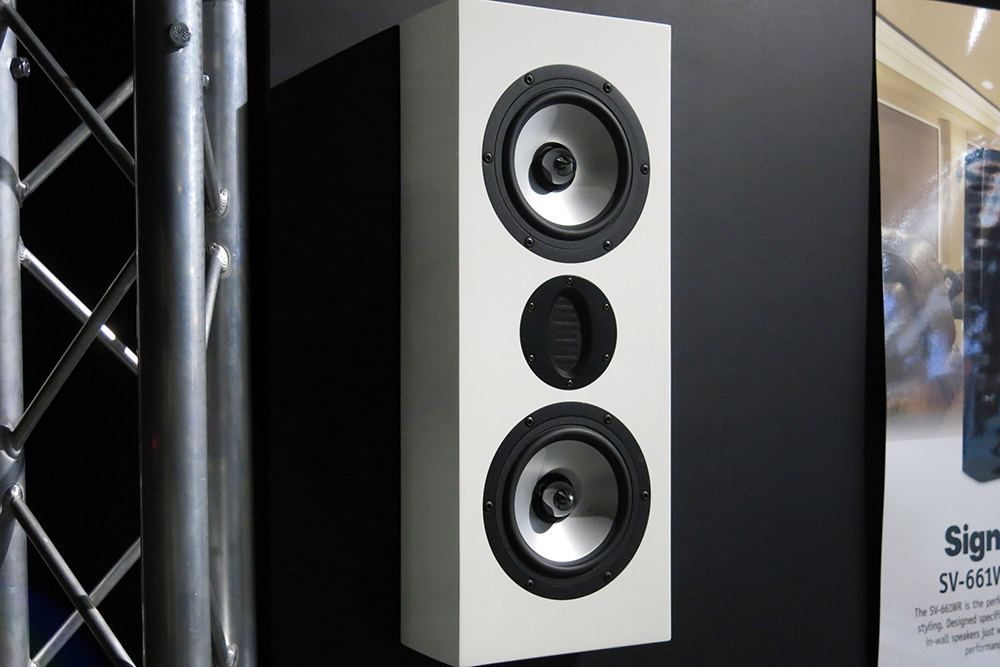 RBH’s SV-661WR ($1349.95 each) is designed to bring reference-quality sound to an on-wall design. It has dual 6.5" woofers with phase plugs, a proprietary AMT folded-ribbon tweeter, and an upgraded crossover. The non-reference model, the SV-661W ($899.95 each) eliminates the phase plugs on the woofers and substitutes a conventional dome tweeter. Both are available in black gloss or white gloss, and both include magnetically attached grilles. 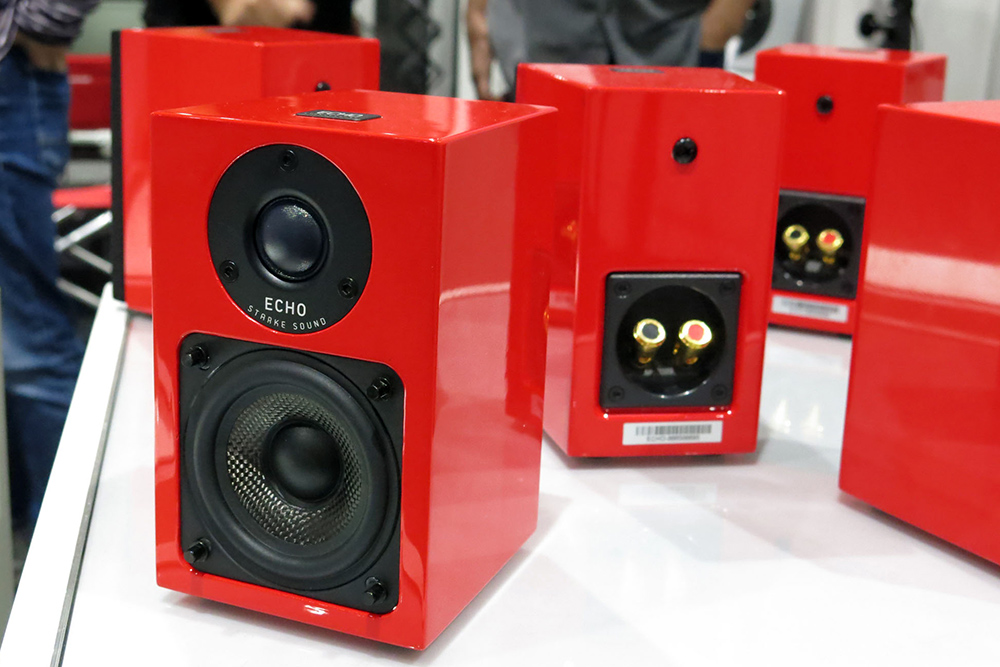 Starke Sound’s Echo mini-speaker ($299/pair) is intended mostly for use in computer gaming systems. Each speaker has a 3.5" woofer and a 0.8" tweeter. A set of five with a compact subwoofer (also available in the red finish!) costs $1688. 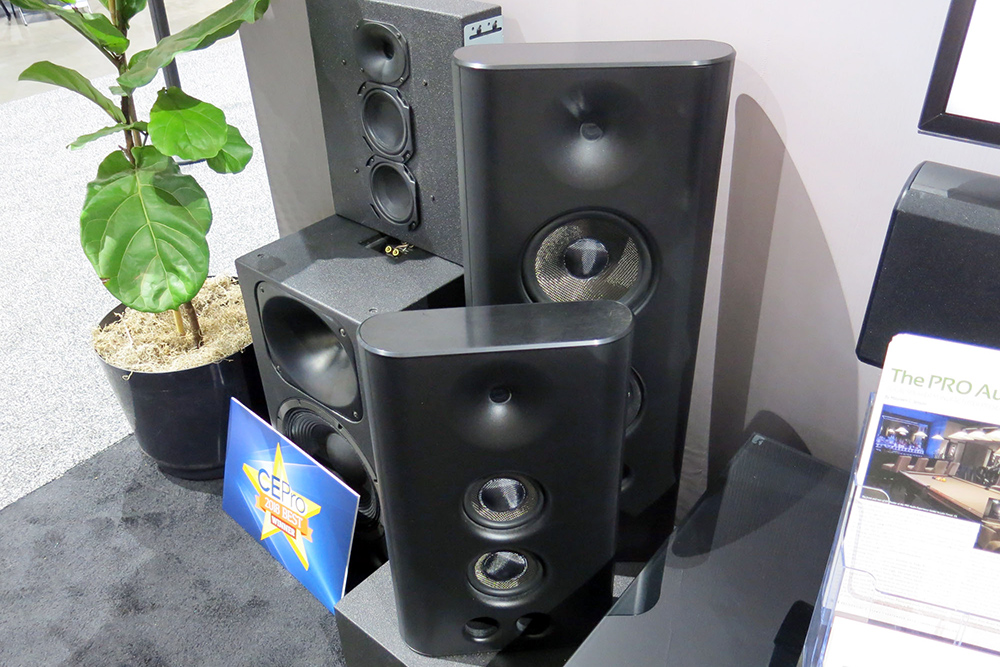 Pro Audio Technology is known for having some of the most technologically advanced speaker systems in the custom-installation business, but they’re all expensive, built-to-order designs intended to be hidden behind projection screens and fabric wall coverings. The new Theory brand takes the company’s design concepts to a much lower price point with speakers made from aluminum extrusions measuring less than 4" deep. The line includes three soundbars, four on-wall models, three in-wall models, two in-ceiling models, and four subwoofers. The systems include . . . 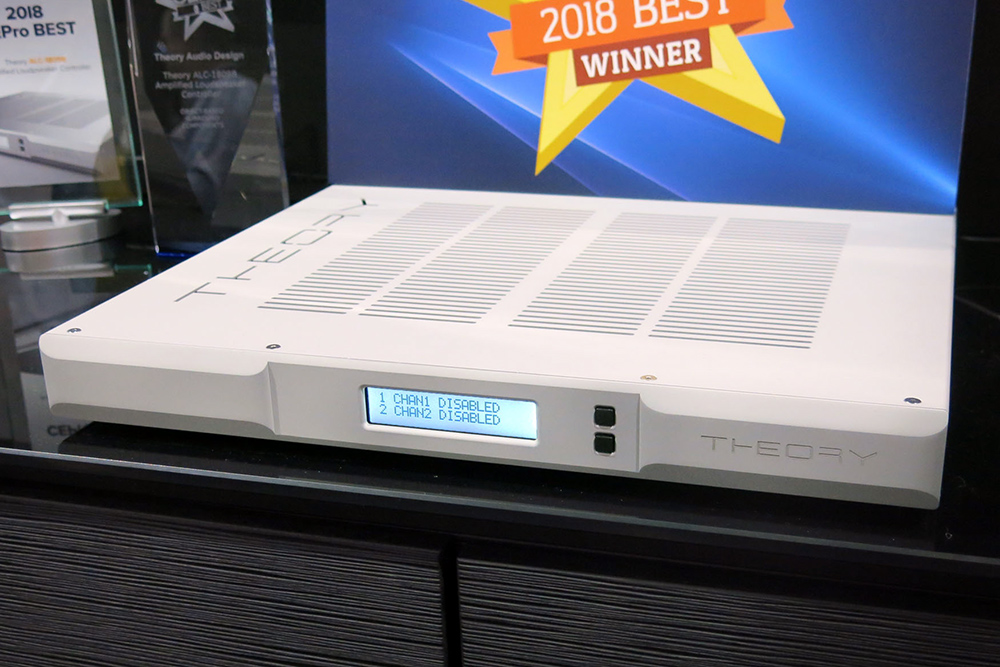 . . . a nine-channel class-D amp with three 300W channels, six 600W channels, and internal digital signal processing with eight channels of ten-band parametric EQ. The system includes ducking, so if you connect an Amazon Echo Dot, it’ll lower the system volume whenever you issue a voice command. A 5.1-channel system with a three-channel passive soundbar, two on-wall surround speakers, a subwoofer, and the nine-channel amp starts at $7900. Despite being soundbar-based, the system easily played loud enough to reach peaks I’d estimate were well over 100dB, in a demo room with 30 seats. 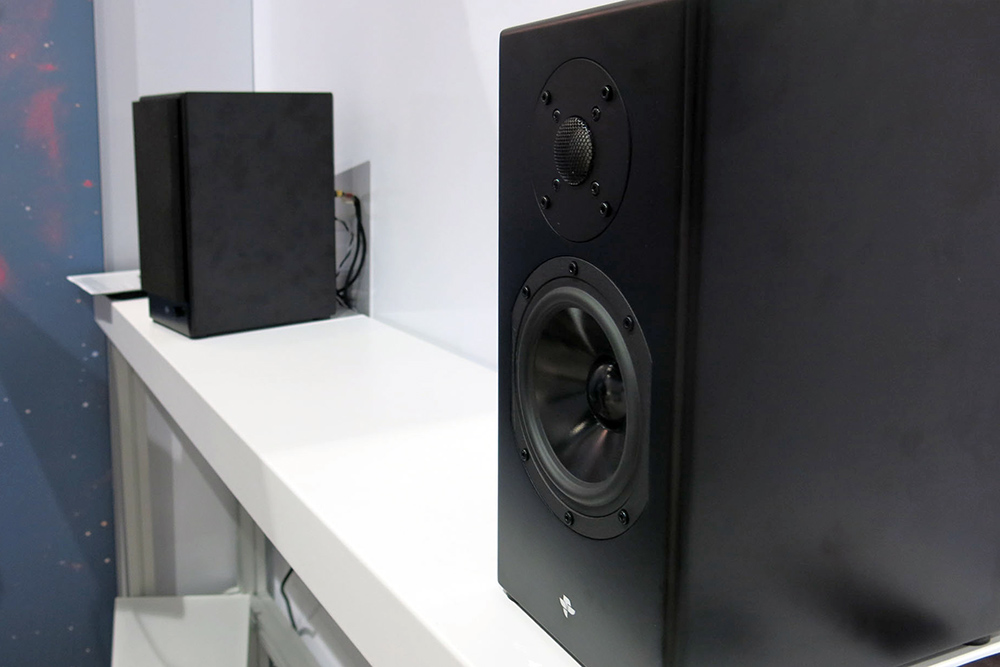 Totem Acoustic hopes its Kin Play ($1000/pair) will “plant the seeds of the next generation of audiophiles.” The speakers’ internal amplifiers are rated at 120Wpc, and the left one has TosLink optical digital, 3.5mm analog, and stereo RCA, the latter with a switchable phono stage for direct connection of a turntable. AptX Bluetooth wireless is also included. The left speaker has a volume/input knob, and a remote control is included. Expect to see them on store shelves in November.