It takes dedication to reach our hobby’s goal of the highest fidelity. This dedication can come in many forms. For instance, you can start with a dedicated listening room. I’ve had one for over a year now, and it’s made a tremendous improvement in my enjoyment of my music. No longer is my system set up in the busy family room -- it’s neatly tucked away in a room above the garage. The best part of this room is that its sole purpose is to maximize the quality of sound of the recordings I listen to. As such, it means there’s a whole set of compromises I don’t have to make when listening to my music.

Dedication is also required in the buying of electronics. Sure, there are some really great integrated amplifiers out there, but usually, a separate power amplifier and preamplifier provide better performance because the design of an integrated amplifier is inherently compromised: both amplification and preamplification stages must occupy the same box. They often share the same power supply, and critical circuits might not be isolated from each other as well as they could be.

Another example is the digital source. Many people now use computers to play music. But personal computers, whether Apple or Windows-based, weren’t designed to be dedicated music servers. Sure, they can do the job, but there are processes running in the background that use up processor speed and virtual memory, which affect the sound. And in the case of Macs, sample-rate conversion for the high-resolution audio files isn’t automatic -- it requires additional software.

Assembling and setting up a reference-grade audio system requires that every detail be examined and any problems addressed -- there is no room for compromise. Jeff Fritz’s goal in assembling The World’s Best Audio System is to push to the absolute limit the concept of "no compromise" -- cost is not an issue. Which is why the dedicated digital music server chosen for TWBAS 2012 is WideaLab’s Aurender S10 music playback and storage solution ($6990 USD).

WideaLab is based in South Korea. Its parent company, Wonik Corporation, has backgrounds in electronics, materials, construction, leisure, finance, automation, and healthcare technology. All of WideaLab’s engineers come from Wonik, where each has had at least ten years’ experience in the development of audio, visual, and communication products.

WideaLab’s stated philosophy is that "Good things come from good people. We, at WideaLab and Wonik, try to develop good products with good people. We study the best ways to use the latest technologies available and technologies that will be available in the future to make the best product possible at a reasonable cost. Fortunately, with good products come good things."

Today, several companies are producing audiophile-quality music servers. These music computers are dedicated to a single purpose: to provide a stable platform for the accurate delivery of your digitally stored music to your digital-to-analog converter. What, precisely, does that mean? First, a dedicated music server has its own minimal operating system, whose sole job is to transfer to a DAC digital audio files of any resolution. No other programs are open in the background to drain away processing power. Some servers also have hard drives on which the user can store a music collection, hopefully in any file format and resolution. The best servers have few or no moving parts -- all you hear is your music, not annoying cooling fans, or hard drives searching for and reading your files. The combination of these qualities allows the digital bitstream to be transferred to the DAC in the most pristine manner possible.

First, the look of the S10 will fit in well with other reference-grade electronics. Its chassis is all brushed aluminum, available in silver or black. The two AMOLED (active-matrix organic light-emitting diode) displays on the front panel give you the artist’s name and the title of the track that’s playing, and can also display the levels of the right and left channels. The displays’ brightness can be adjusted, and there’s a choice of two colors for the level meters. There are five pushbuttons: On/Off/Standby, Menu, Play/Pause, Play Previous, and Play Next.

On the rear panel are four digital outputs: optical, AES/EBU, coaxial, and USB. The USB connection was originally designed to only play or transfer music to the S10, but a recent firmware update means that the USB port can now be used as a digital output as well. The USB connection is also compatible with asynchronous USB DACs. All of the S10’s digital outputs can transfer data up to 24-bit/. Also on the rear panel is an Ethernet port for connection to a network, an On/Off switch, and an IEC power inlet. The S10 measures 16.75"W x 3.75"H by 13.75"D and weighs 31 pounds.

Now for what makes the S10 special. Remove the top plate and you see three separate compartments designed to minimize electrical interaction between disparate circuitry. The first compartment holds WideaLab’s proprietary soundcard. Why did they design their own soundcard when so many good ones are available?

Most of the soundcards used in today’s commercially available music servers aren’t engineered for high-performance sound. Instead of using an off-the-shelf part from an OEM for the Aurender S10, WideaLab has developed its own soundcard. This includes a clock based on an Oven-Controlled Crystal Oscillator (OCXO) and a Field-Programmable Gate Array (FPGA). Because such an in-house solution results in less jitter, it should also mean that digital signals are transferred with inherently greater accuracy than can be accomplished with less-ambitious clock designs. 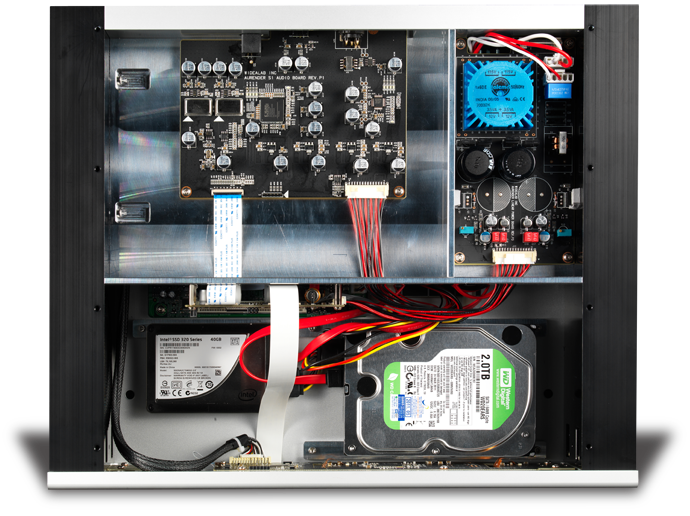 The third compartment contains the motherboard, hard drives, and switch-mode power supply. The fanless S10 comes with one hard drive that can hold up to 2TB of music files, as well as a 64GB solid-state drive (SSD). An SSD is used not only because it has no moving parts but, per WideaLab, "to avoid vibrations, electromagnetic interference, and latency found in hard disk drives. The use of solid-state drives vastly lowers processor access times." When a music file is accessed, the file is cached: the S10 retrieves the file from the hard drive and sends it to the SSD for temporary storage. "The hard disk then falls asleep and the music is played back using only the solid-state drive. This design eliminates problems with sonic and electromagnetic noise from spinning hard disk drives." This high level of execution is a product of WideaLab’s vast background in all things electronic, and parent company Wonik’s substantial investment in research and development.

All of these features above make the S10 perhaps the best music server commercially available today, but it wouldn’t be complete without a well-thought-out user interface. WideaLab has developed a free iPad app that provides one of the most user-friendly experiences I have seen with an audio product. However, the fact that the S10 owner must purchase an iPad must not be overlooked. If you don’t own an iPad, add at least $600 to the $6990 price tag. From the iPad app, you can navigate your music collection, adjust the display, turn the S10 off, and edit playlists. You can also easily upgrade the S10’s firmware: Use the app’s Settings tab to see if the S10 needs to be upgraded. If it does, push Upgrade on the iPad’s screen and the S10 will take it from there. Adding new music is also a fairly seamless process, once the S10 is properly connected to your home network. Connecting the S10 isn’t quite rocket science; however, if you’re relatively computer illiterate, you might ask someone more experienced to help you. Instructions for network setup can be found on the Aurender website.

I’m sure it’s by now apparent why the Aurender S10 has been chosen as the digital source for TWBAS 2012. WideaLab has approached the S10’s design from seemingly every angle, and the result is an all-out assault on the music-server category. This amazing product far exceeds in performance what I’ve experienced with other music servers. WideaLab is dedicated to making compromises unnecessary, and that makes it a perfect fit for TWBAS 2012.