New loudspeakers aren’t as easy to find at the Tokyo International Audio Show (TIAS) as they are at other shows. Part of the problem lies with the Japanese manufacturers -- some make loudspeakers, but more companies seem to be focused on electronic components. As a result, although it happens, it’s actually not that often you see a loudspeaker debut from a Japanese brand.

Then there are the non-Japanese companies -- most will debut their speakers at other events around the world. For example, at Warsaw’s Audio Video Show two weeks ago, we had three articles on loudspeakers and we still hadn’t covered all the speakers we saw there. At Munich’s High End event each May, there are so many new speakers being shown that we couldn’t see them all if we doubled our team.

Still, there were some new speakers I found at this year’s TIAS, as well as some that weren’t new but that we’ve never covered anywhere. Below are the ones I found, with all prices in Japanese yen (¥). Presently, one US dollar is equivalent to 108.62 yen.

Japan’s TAOC (Takaoka Anti-Oscillation Casting) appears to be a company that manufacturers mostly equipment racks, speaker stands, footers, and similar accessories, with a strong focus on “vibration damping and oscillation control.” It does make speakers as well, mind you, and at TIAS 2019 the company was showing its new AFC-S100 stand-mounted design, a two-way model with what appeared to be a 1" tweeter and a 6" midrange-woofer. It was sitting on one of the company’s stands and four of its footers. As usual at this show, getting technical details was difficult due to a language barrier, so I couldn’t find out much about the drivers or the crossover, but what the rep was more focused on was . . . 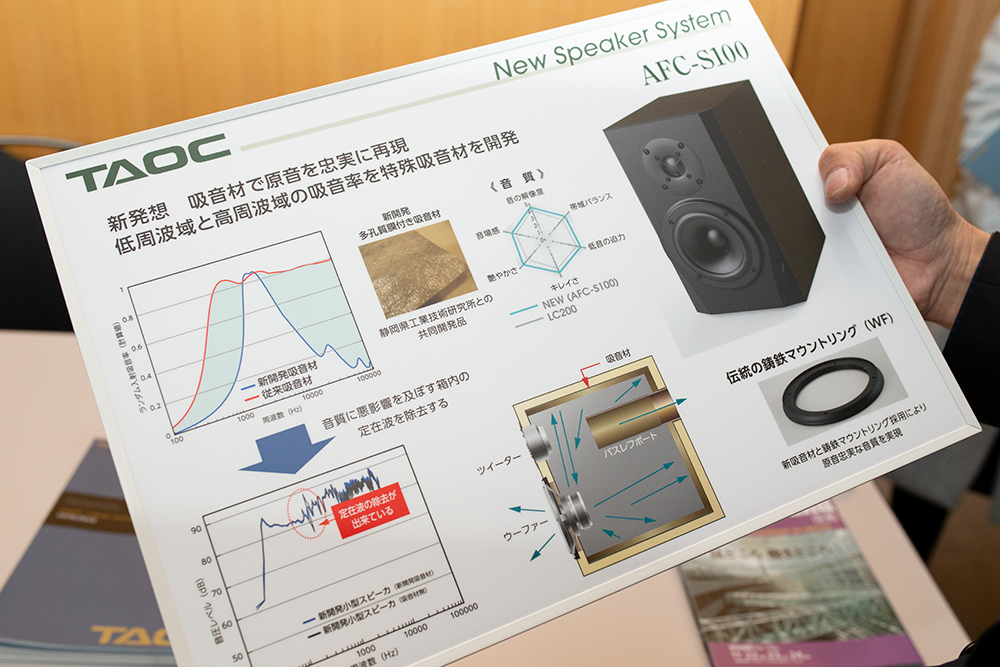 . . . the internal construction of the cabinet. He whipped out the large card you can see above to show how the inner walls are lined with a proprietary damping material, which helps tame internal reflections and smooth out the frequency response. The AFC-S100 is so new that firm pricing has not been established, but TAOC hopes the retail price will be around ¥22,000 per pair when it’s finalized and released. 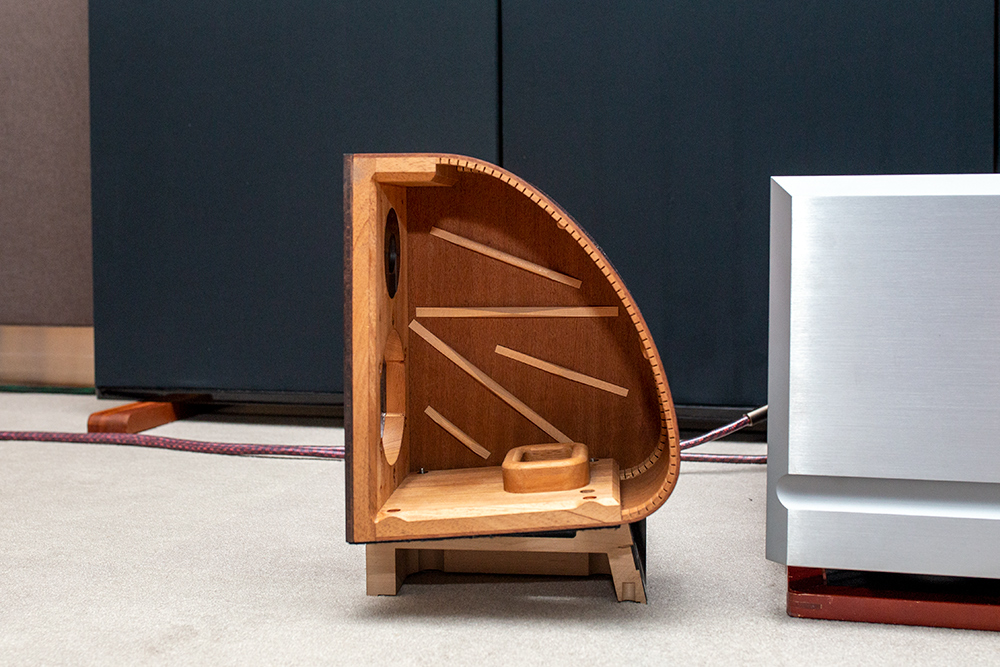 Kiso Acoustic is a Japanese firm that makes speakers like few (perhaps no) others do -- out of real wood, not MDF with a veneer or paint job, in such a way that the cabinet resonates like a musical instrument. At TIAS 2019 it was showing a . . . 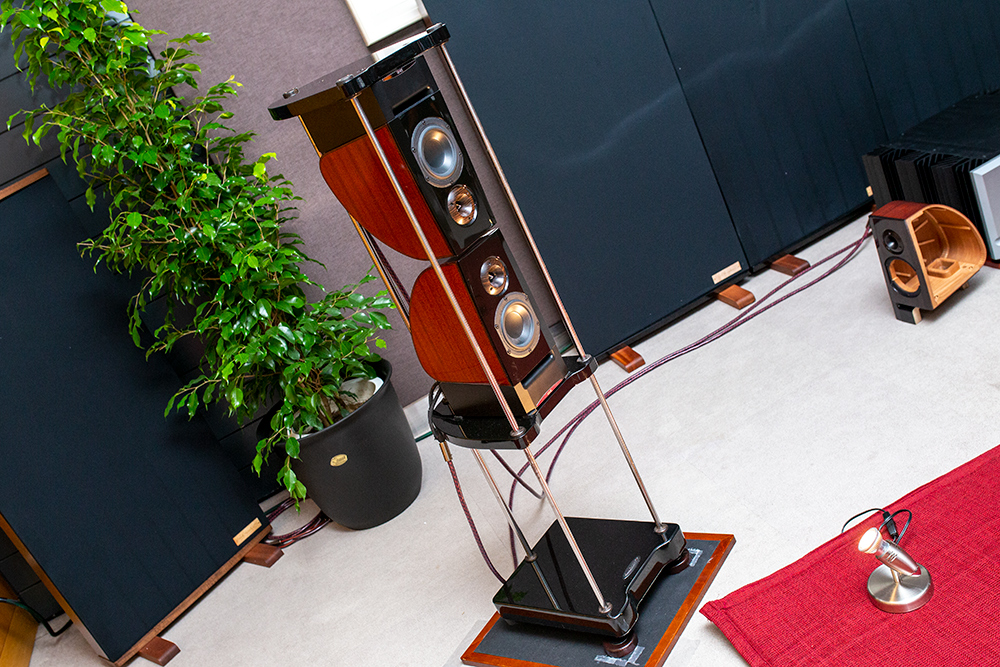 . . . “double stacked” version of its HB-X1 loudspeaker, which is basically two HB-X1s, with one inverted and both mounted into what the company calls a W Stack Stand. The HB-X1, which is tiny and has a mahogany cabinet equipped with a 0.67" (17mm) tweeter and a 3.94" (10cm) midrange woofer, isn’t really new -- the Japanese magazine Stereo Sound gave it an award in 2013 -- but the setup at TIAS 2019 seemed so popular and so unique that I figured I had to cover it. But there’s a bit of a shocker -- the price. The HB-X1 retails for ¥1,700,000 per pair, which converts to just over $15,600! So for the configuration you see above, you have to double that price, then add the price of the stand, which, unfortunately, I couldn’t find. But based on what the speakers for it cost, you know it just can’t be cheap. 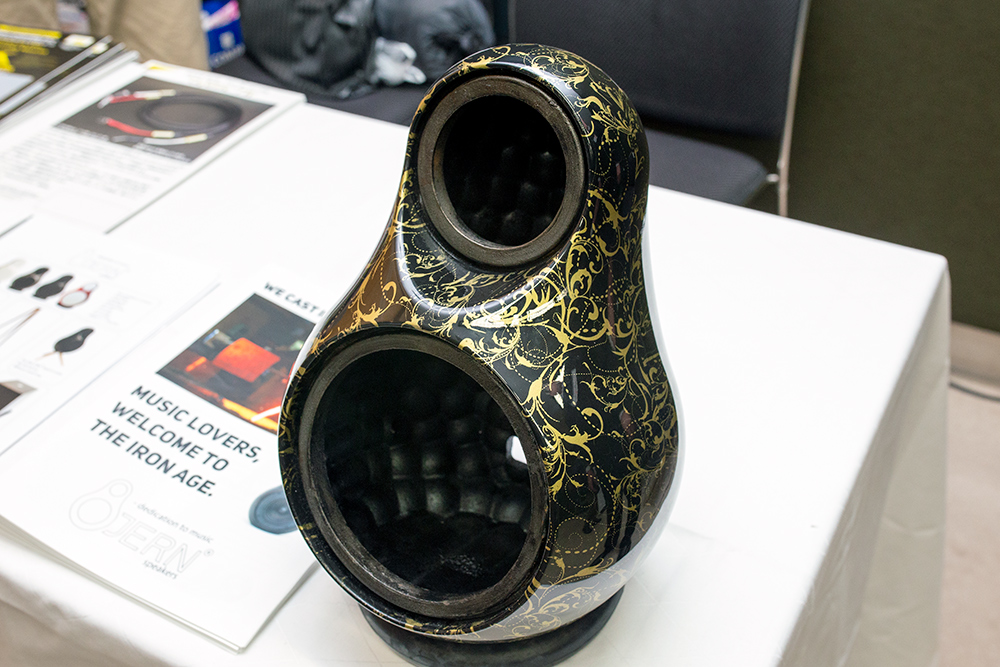 Jern, from Denmark, also makes small, expensive speakers in a way most others don’t -- their enclosures are cast iron (jern is the Danish word for iron). I picked up the ornamentally painted enclosure you see in the photo above, and wow, did it feel heavy -- as in bowling-ball heavy at least. Not surprisingly, it felt as solid as a bowling ball, too. In the photo below . . . 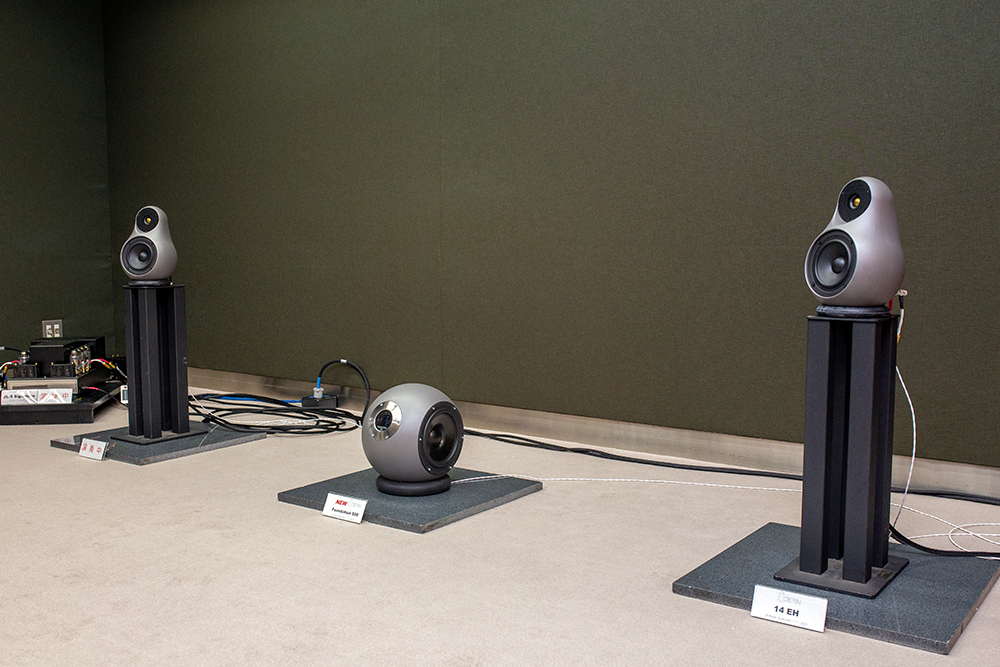 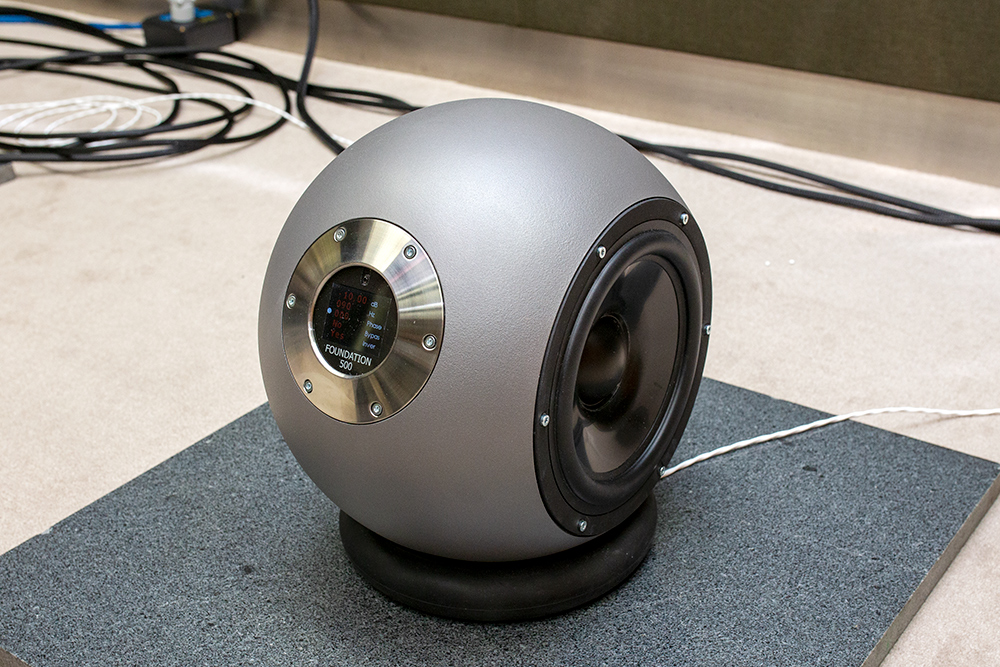 . . . Foundation 500 subwoofer on the floor in between them is right out of the gate. Priced at ¥800,000, the 500 has two 8" Scan-Speak woofers with aluminum cones -- one per side, in a force-canceling configuration, to eliminate resonances -- powered by a 500W class-D amplifier. The 500’s specified frequency range is 24Hz to 200Hz (-6dB), with a “smooth 12dB per octave reduction of frequency response up to 1400Hz giving a fast transient response.” I was told that this is a fully “analog” design -- digital processing is used only for control and, therefore, is not in the signal path. Features . . . 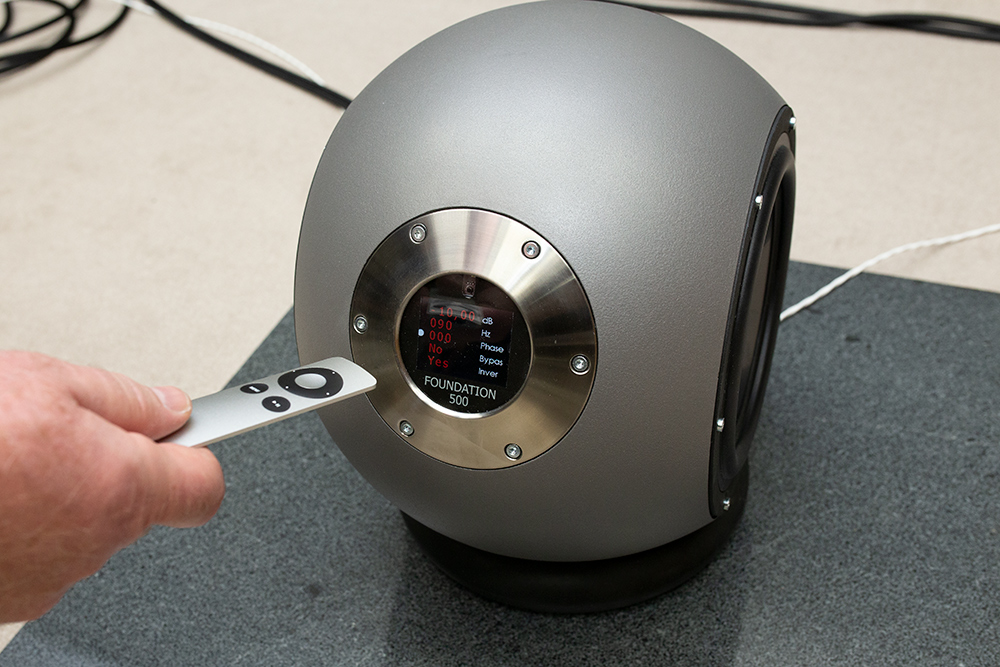 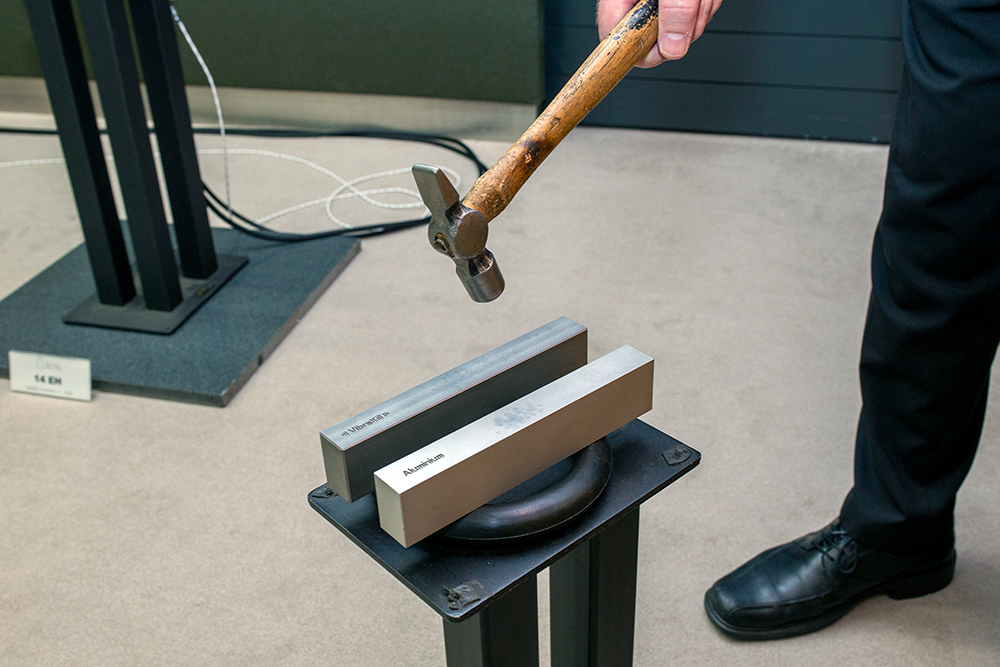 To reinforce the company’s position that cast iron is a better material for a loudspeaker than aluminum, over to the side were a cast-iron bar, an aluminum one, and a hammer. In a short video I made for our Instagram page, you can see designer Ole Lund Christensen strike each one -- and then you can hear the result for yourself. (If you can’t make it over to Instagram, I’ll let you know that the aluminum one rings like a bell, while the cast iron one doesn’t.) 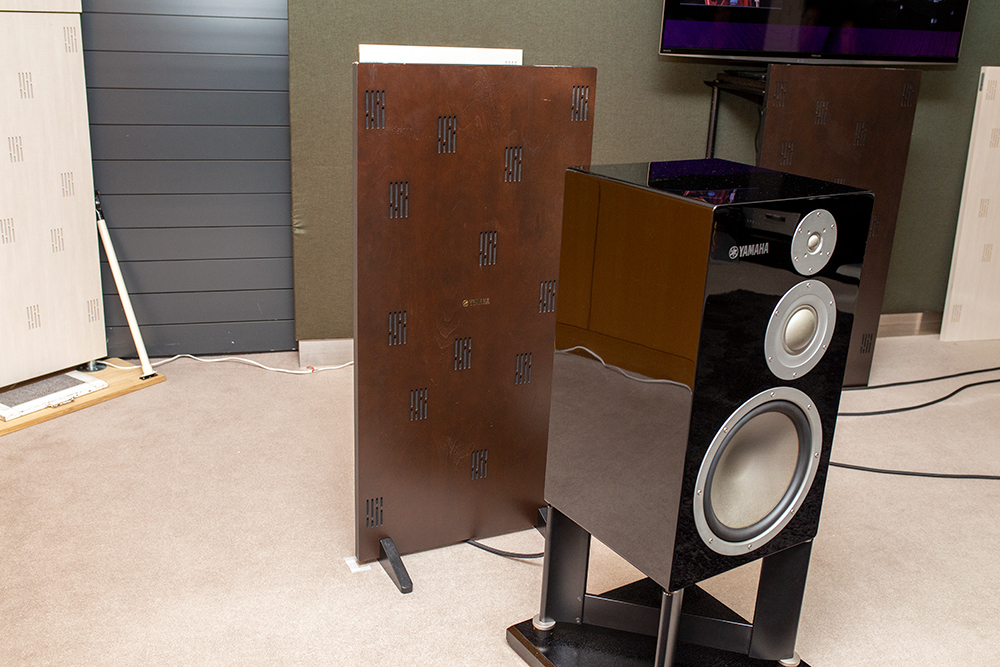 You might think this one is about the Yamaha NS-5000 loudspeaker shown, but it’s not. Instead, it’s what’s behind the speaker -- an acoustic panel from Yamaha named ACP-2 that works with a pair of loudspeakers to help strategically tame their output into the room. Priced from ¥45,000 to ¥60,000, depending on the finish (the dark wood one shown is ¥60,000), the ACP-2 measures 23.11"W x 47.24"H x 1.18"D and weighs 12.5 pounds. It’s said to work from 80Hz to 4000Hz, but I’m not sure how much sound it absorbs and how much it reflects. What I do know is that Yamaha not only had these panels behind the speakers; they also had them in many other places in the room, such as along the walls and in the corners. They were also showing and using a slightly smaller, lighter panel that looks similar called TCH, which is priced at ¥36,000 and works from 125Hz to 4000Hz. These panels seem like interesting acoustic treatments, but unfortunately, I was told that they’re available only in Japan. 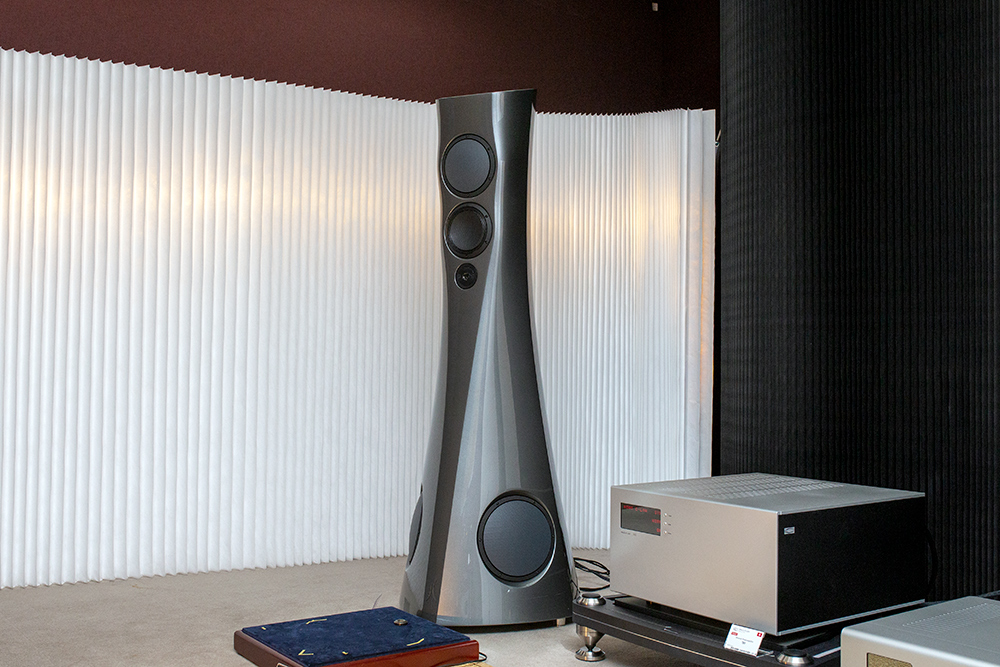 Now it’s time to move on to the BIG flagship-type speakers. The last time I was at TIAS, in 2016, Estelon, which is from Estonia, wasn’t being distributed in Japan. Now it is, with its new Forza loudspeaker, which made its world debut in Munich in May at High End, being prominently displayed in a fourth-level room. Priced at a hefty ¥13,800,000 per pair, the Forza is a five-driver, four-way design that uses all-Accuton drivers -- two 9.84" CELL aluminum-sandwich-cone woofers, one 7.5" CELL aluminum-sandwich-cone mid-woofer, one 6.6" CELL ceramic-cone midrange, and one 1" CELL diamond-dome tweeter. The Forza, like Estelon’s other speakers, has . . . 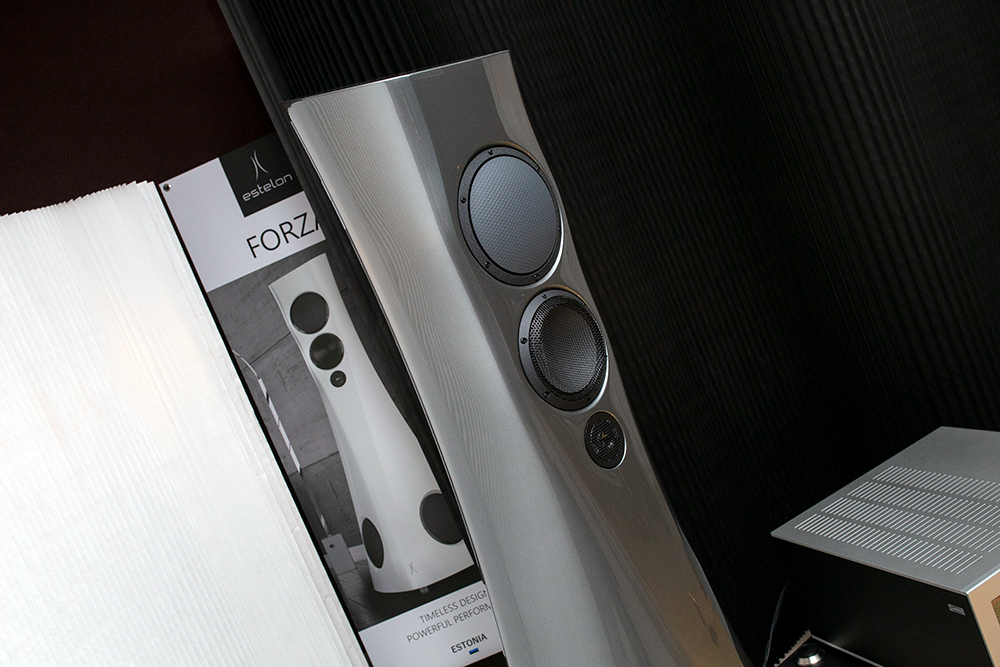 . . . a beautifully shaped cabinet made from a proprietary marble-based composite. That handiwork is all done in Estonia. Standard Forza finishes include Black Pearl Gloss, Dark Silver Gloss, White Pearl Gloss, and Black Matte. 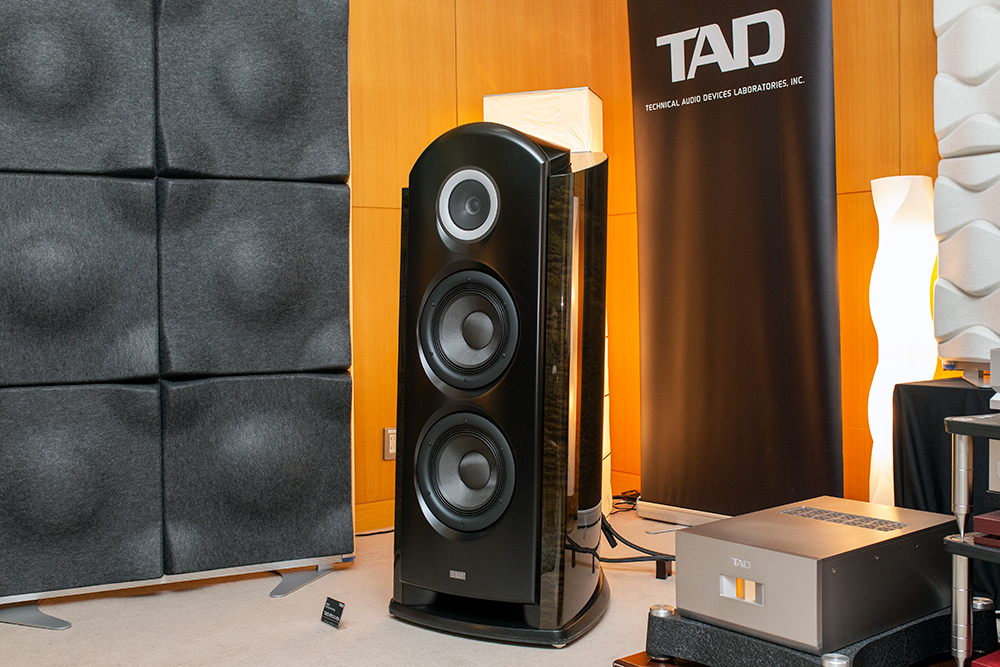 TAD (Technical Audio Devices), which is from Japan, has updated its flagship Reference One loudspeaker -- the new name is R1TX. From what I could gather, the drivers are all the same as the original Reference One -- two 10" woofers mounted below a 1 3/8" tweeter mounted coaxially into the throat of a 6.5" midrange. The tweeter and midrange both have beryllium diaphragms, while each woofer has what TAD calls a Tri-Laminate Composite Cone (TLCC). The main updates include a revised crossover network . . . 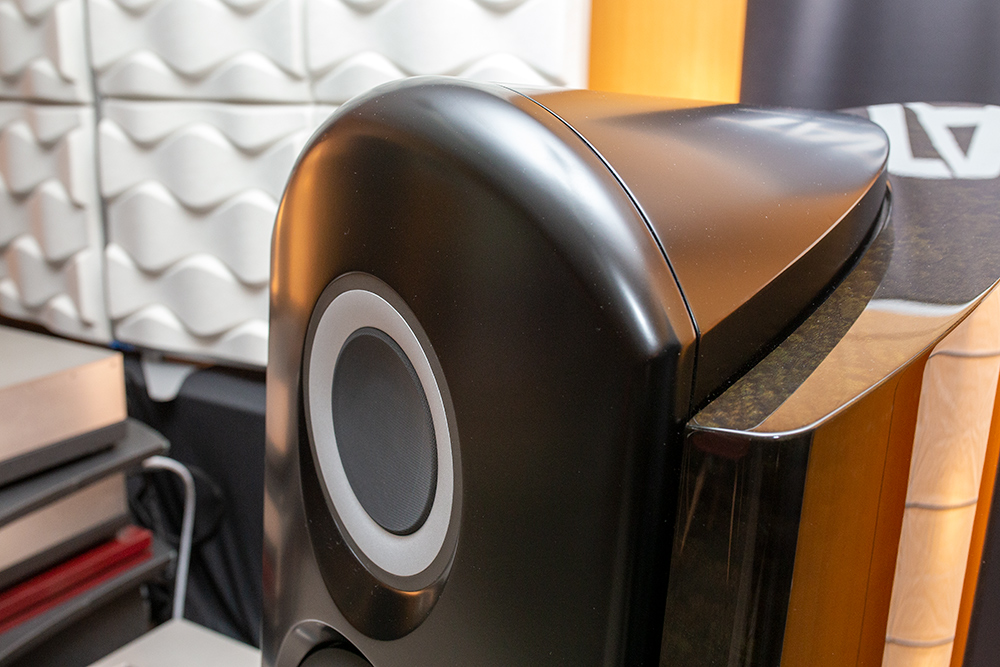 . . . reshaping of the cabinet, primarily around the top, and improvements to construction of the main enclosure, which is made in collaboration with luxury furniture maker Tendo Mokko, also of Japan. The two available cabinet finishes are Emerald Black and Beryl Red. The price for the TAD R1TX is ¥10,000,000 per pair. 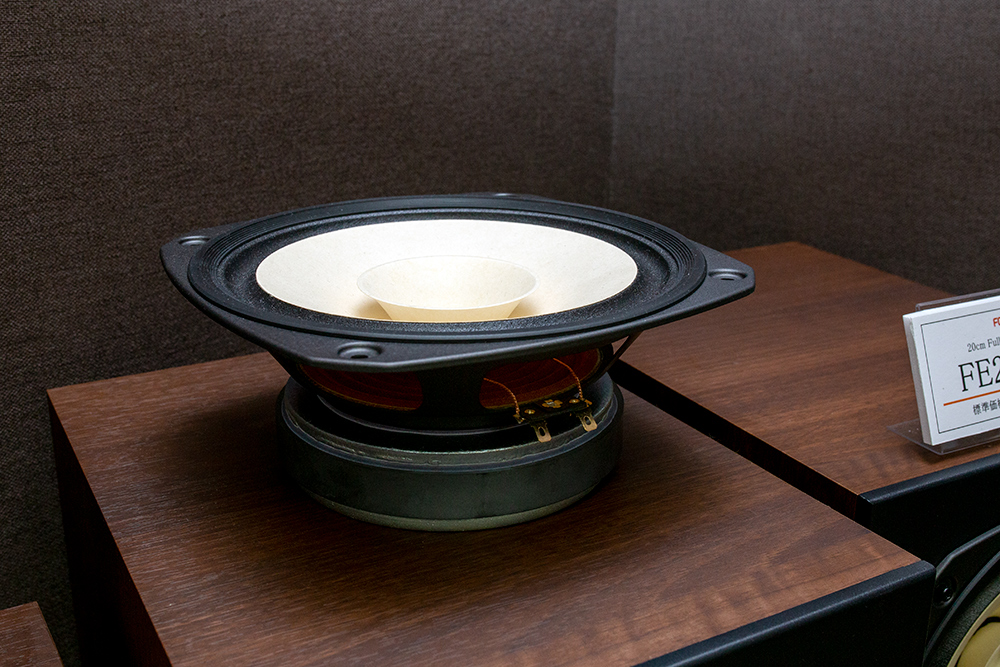 Finally, Fostex -- the legendary Japanese manufacturer of “full range” speaker drivers. At TIAS 2019, the company was showing its FE-NV series of full-range drivers -- five of them in all -- which it’s calling “The Next Standard.” The one shown above is the largest model, the FE206NV. The way they were displayed at TIAS was interesting -- there was each driver alone, as well as . . . 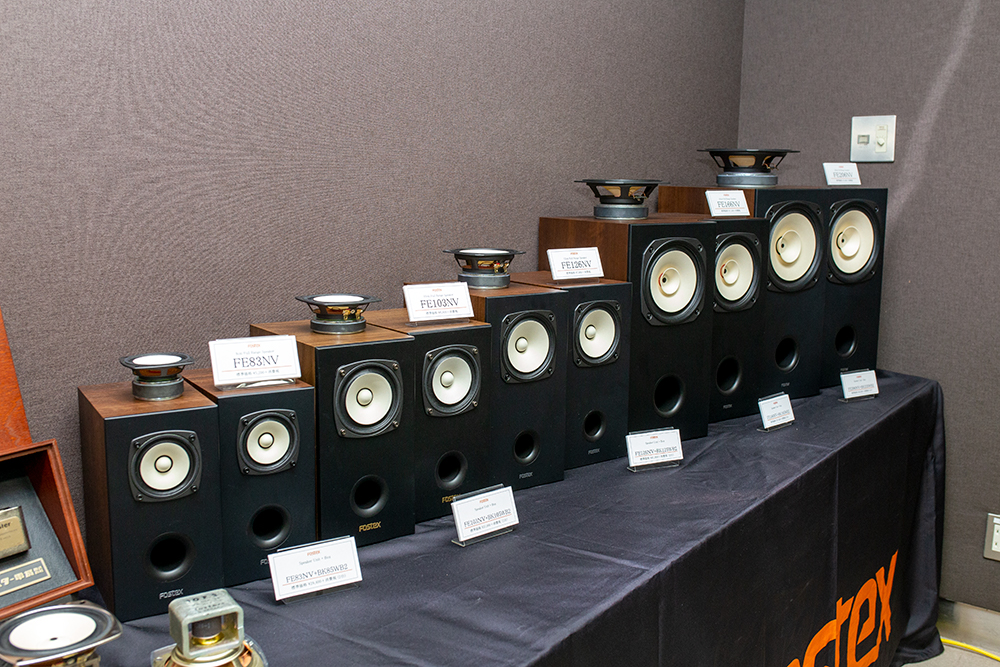