“It’s a terrible trip to an amazing city.” That’s what Jeb Roberts, one of our copy editors, texted me when he found out I was about to leave to cover the annual Tokyo International Audio Show (TIAS), held this year from November 22 to 24.

Jeb was right on both counts. Tokyo is an amazing city, but the trip was awful. It took two flights to get here, with the first being less than an hour, but the next being just over 13 hours. After that, it takes about 90 minutes by bus or train or car to get from the Narita airport, where many of the international flights land, to the Ginza district, which is the heart of shopping in Tokyo, and more or less where the Tokyo International Forum is, where TIAS is held. I took the train. That all went well enough, but my suitcase from the first flight didn’t make it to the next flight, so I spent the first day in Tokyo in my sweatpants. 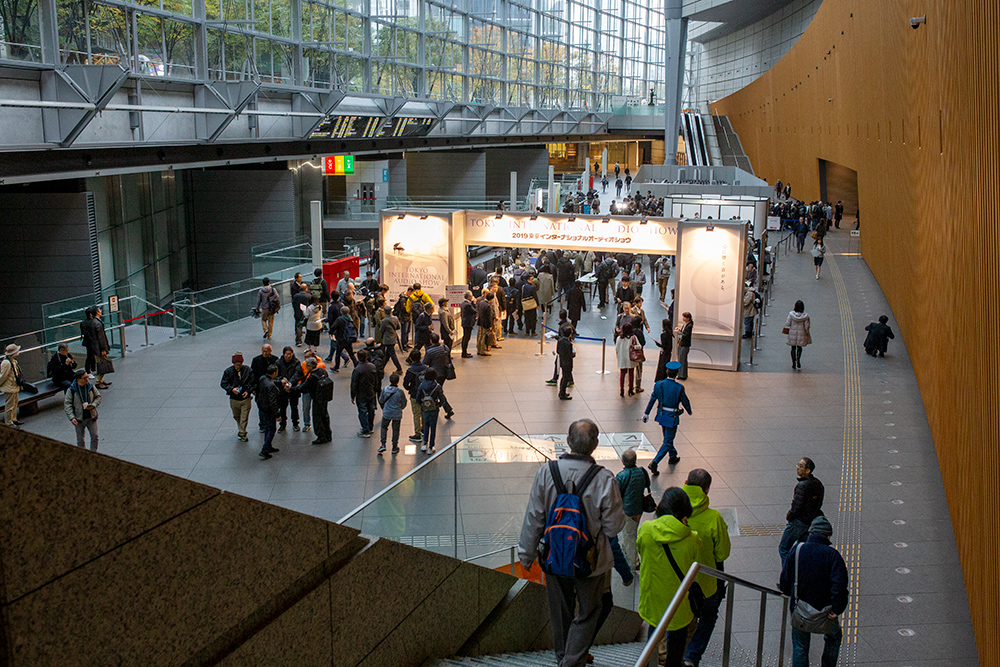 But the pain of traveling to Japan is worth it, since TIAS, which I’d already visited in 2013 and 2016, is a small but worthwhile show, mostly because you can find plenty of new products to write about. Some, as you’ll read below, are available throughout the world, while others are exclusive to Japan. This first installment is on hi-fi electronics, with all prices in Japanese yen (¥). Right now, one US dollar is equivalent to 108.62 yen. 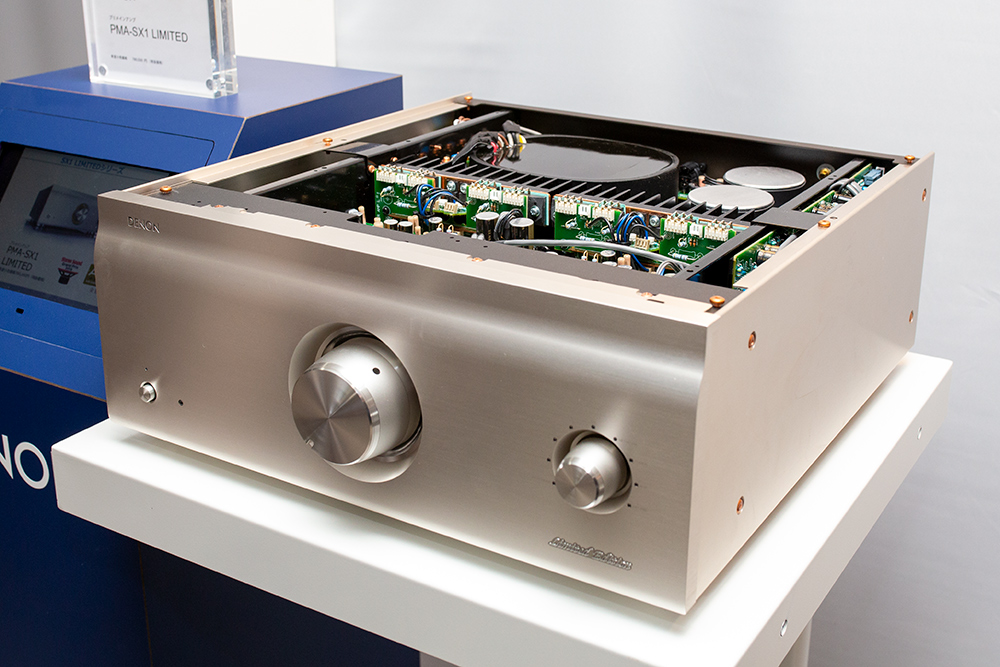 The first two products I encountered were some of the most interesting, but also some of the most frustrating -- because they’re only available in Japan. I would love to see these sell overseas. They’re the Denon PMA-SX1 Limited integrated amplifier (¥780,000) and . . . 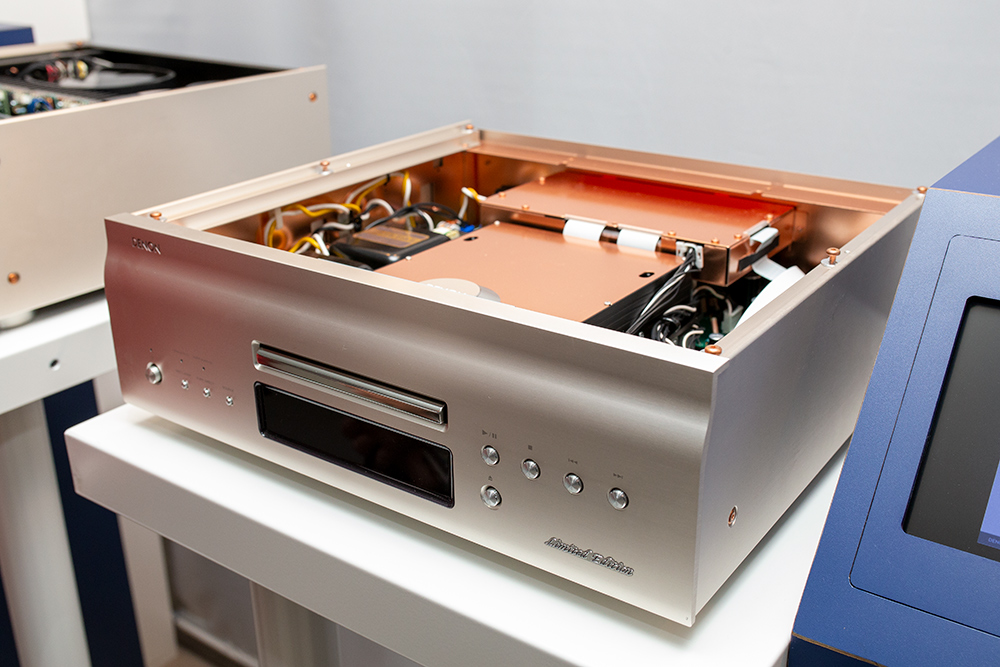 Ever see Sofia Coppola’s Lost in Translation? That came to mind as I was trying to get information about each one, so I had to figure out quite a bit of it for myself (at TIAS, there are few English speakers around). As far as I can tell, both products are based on existing Denon models that are still in production, the PMA-SX1 and DCD-SX1. But since those are priced lower (¥580,000 and ¥550,000, respectively, for the PMA-SX1 and DCD-SX1), these Limited Edition models must be hopped up some, probably with better-quality parts all around. The . . . 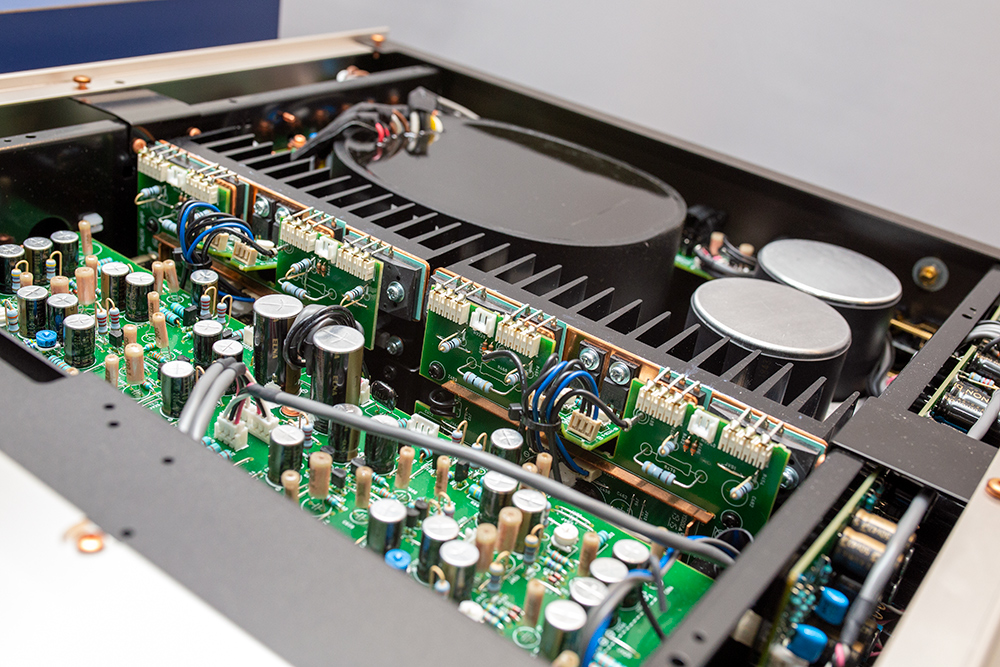 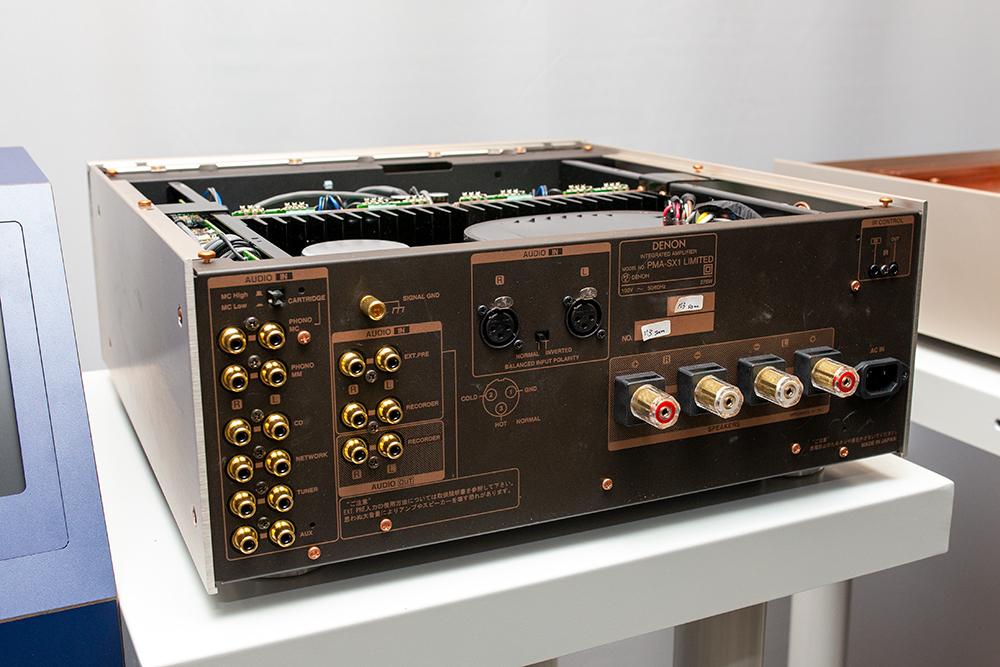 . . . back panel has one set of balanced XLR inputs, with a polarity-inversion switch between, as well as four sets of single-ended, line-level RCA inputs, and two sets of phono inputs (one for a moving-magnet cartridge, the other for moving-coil). The . . . 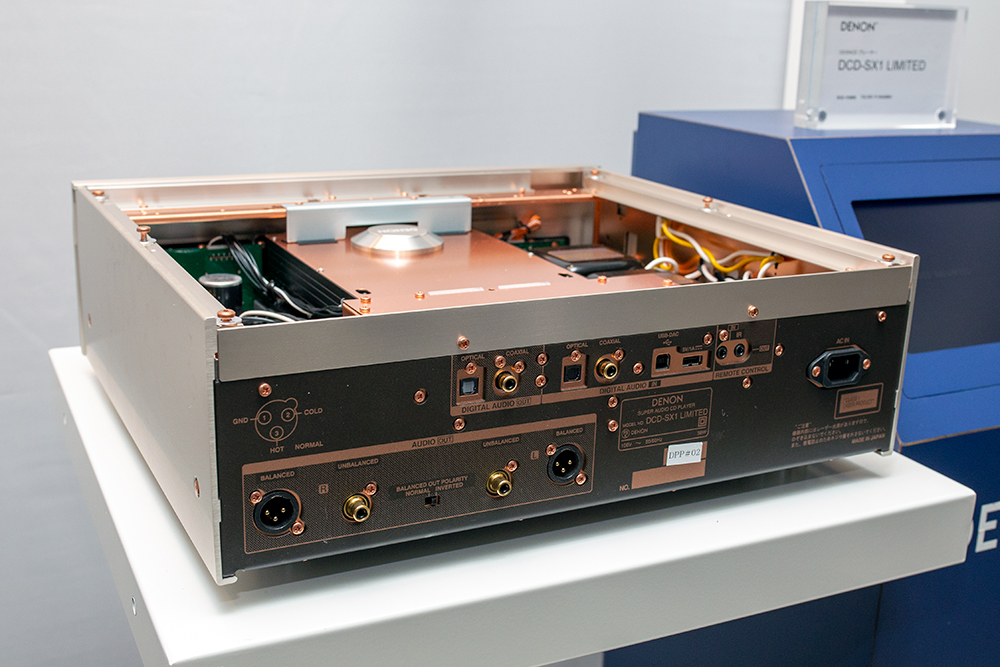 . . . DCD-SX1 plays SACDs and CDs (discs are still really big in Japan), plus it has TosLink optical, RCA coaxial, and USB digital inputs on its backside, for connection to external digital sources. DSD up to 5.6MHz and PCM up to 24-bit/192kHz are supported. As to how limited these SX1 Limited Edition products are, that’s something I couldn’t find out. 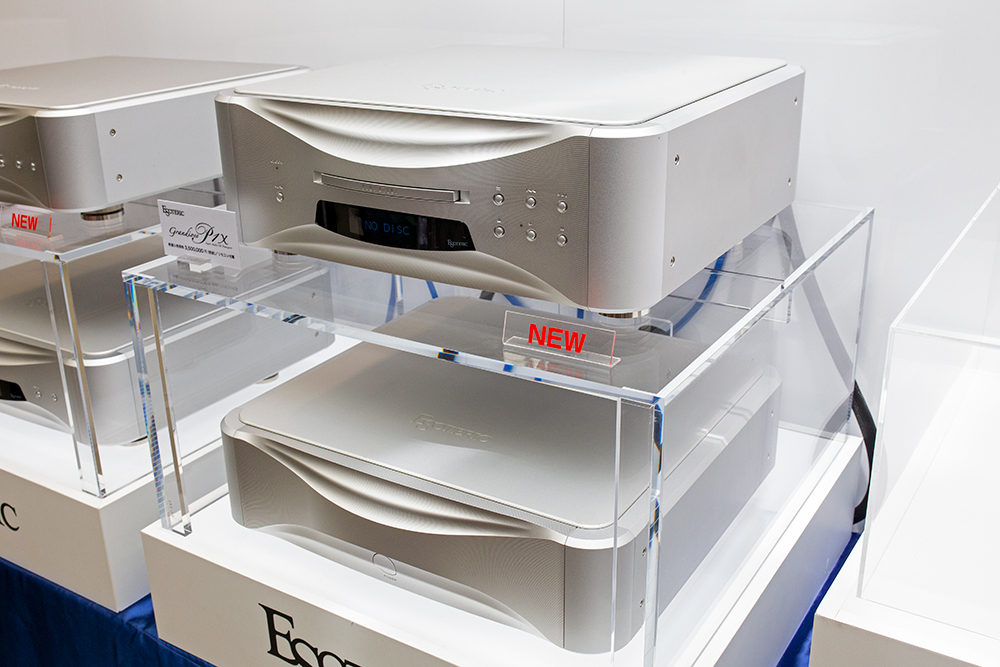 These next two products from Esoteric will be available outside of Japan, but you’ll have to have a thick wallet to afford them. First up is the Grandioso P1X Super Audio CD transport (¥3,500,000), which has an external power supply and . . . 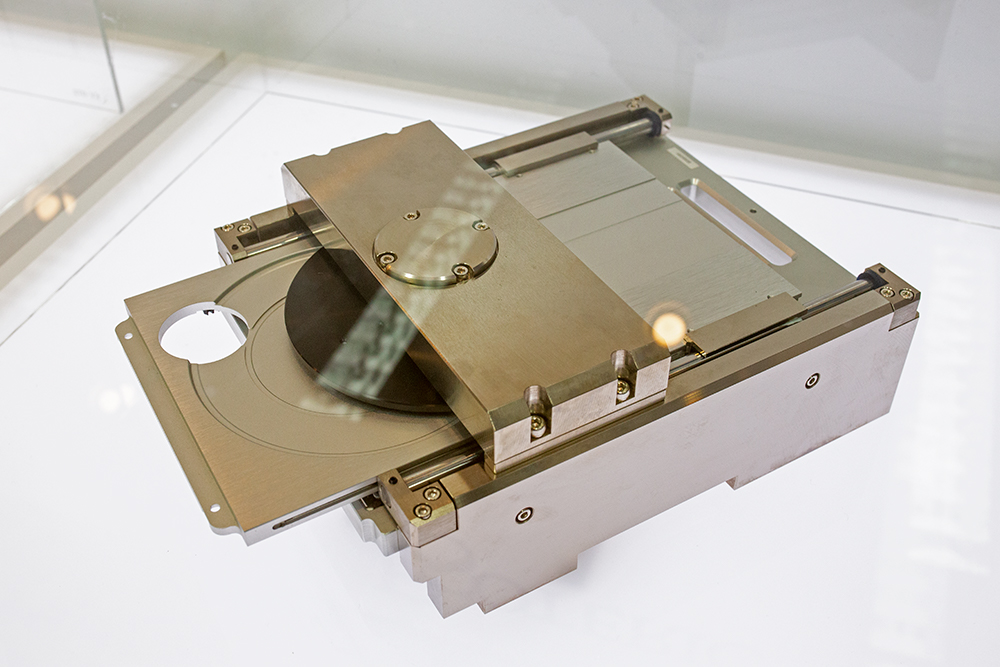 . . . a bespoke VRDS-Atlas transport mechanism inside. This improves upon the company’s VRDS-Neo transport, which it first brought out in 2003. According to Esoteric’s literature: “ATLAS boasts the highest rigidity and weight in the history of VRDS mechanisms. With its larger new SS400 steel side panels and bridge, the ATLAS is 27% heavier (6.6kg mechanism unit, 13.5kg including base) than the NEO, achieving both exceptional rigidity and impressive tone. It also dampens any and all vibration that might adversely affect audio quality. The turntable is machined from solid duralumin for excellent audio quality, and its spindle features a newly designed thrust bearing system. This friction-free one-point spindle support system ensures smooth, noiseless turntable rotation.” 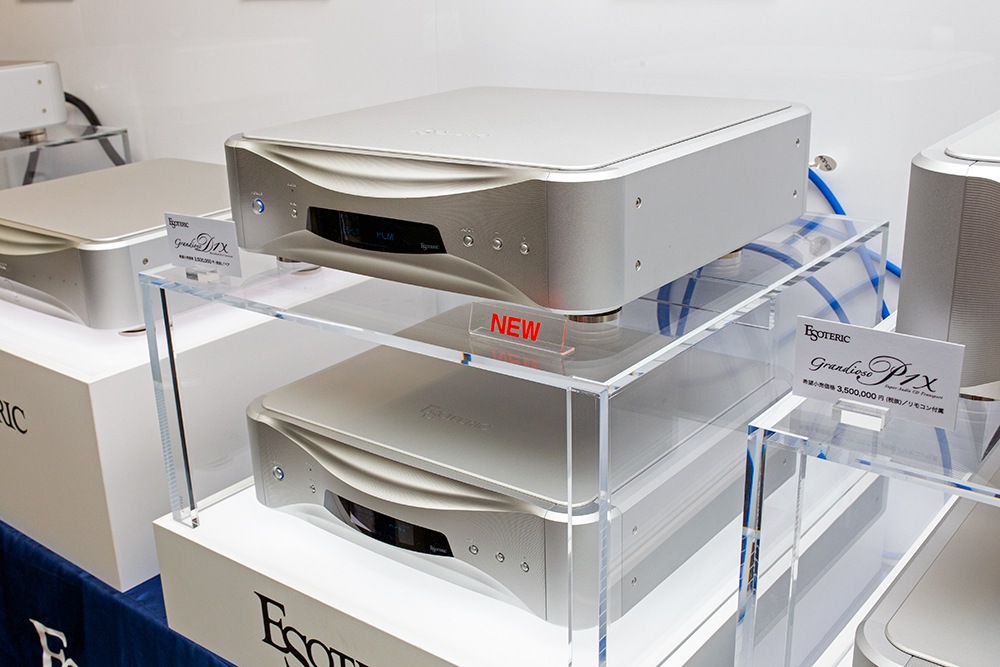 Accompanying the Grandioso P1X are the Grandioso D1X monoblock DACs (¥3,500,000/pair). There are two boxes -- one for the left channel, the other for the right. Each monoblock has a . . . 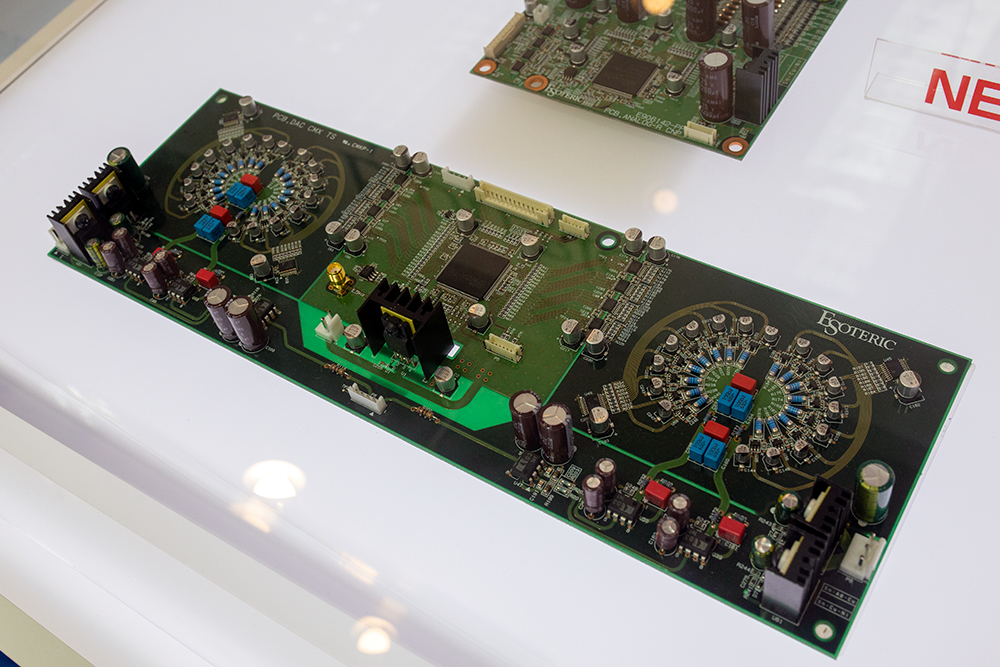 . . . Master Sound Discrete DAC, which the company describes as “a totally original design that represents the culmination of Esoteric’s quest for an original master sound. Its high 64-bit resolution provides vast improvements over our earlier DAC’s 36-bit resolution, and enables support for the latest technologies such as playback of 22.5MHz DSD and 768kHz PCM audio. All processing is handled by Esoteric’s own FPGA algorithm, and a discrete circuit design forgoes the use of generic DAC ICs in order to actualize Esoteric’s vision down to the finest detail.”

The P1X and D1X link together with Esoteric’s ES-Link digital interface, which uses an HDMI cable for transmission. According to Esoteric, “With the introduction of the P1X/D1X, ES-LINK has been further upgraded to Ver. 5 and supports an even wider range of superior sound quality formats (Max. 22.5MHz DSD and 768kHz/48-bit PCM). HDMI’s multi-conductor structure permits full balance transmission of audio data and LR clock and bit clock signals.” 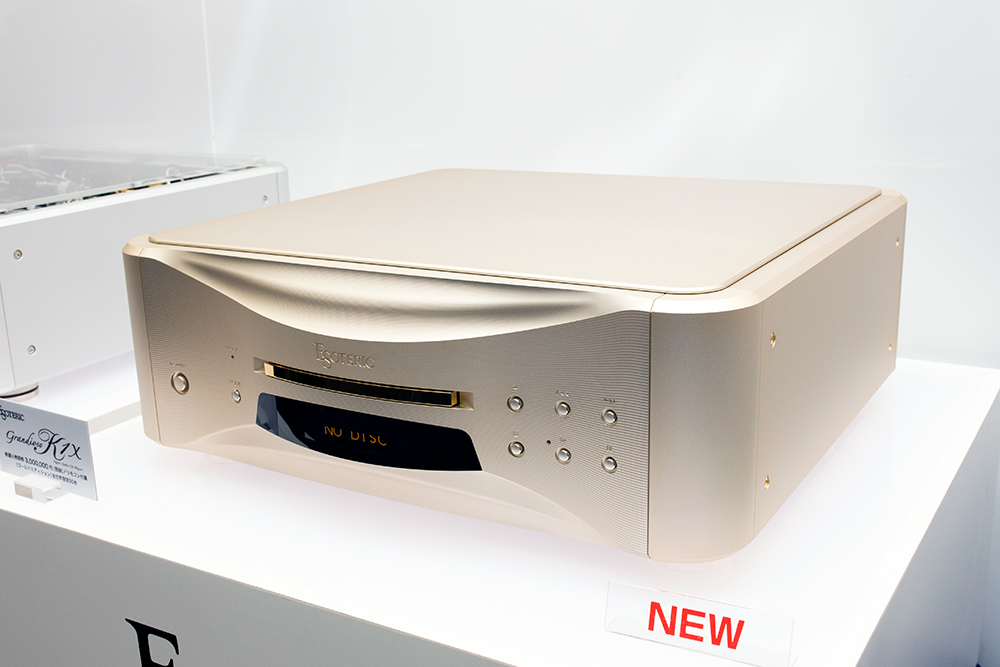 If having all those separate boxes seems excessive to you, Esoteric also showed the Grandioso K1X Gold Edition SACD/CD player, which I’m told is a limited-edition design. Priced at only ¥3,000,000, the K1X Gold Edition has a VRDS-Atlas transport and Master Sound Discrete DAC section. But because this product is so new, I couldn’t find more information about it at the show or even online. It certainly looks nice, though. 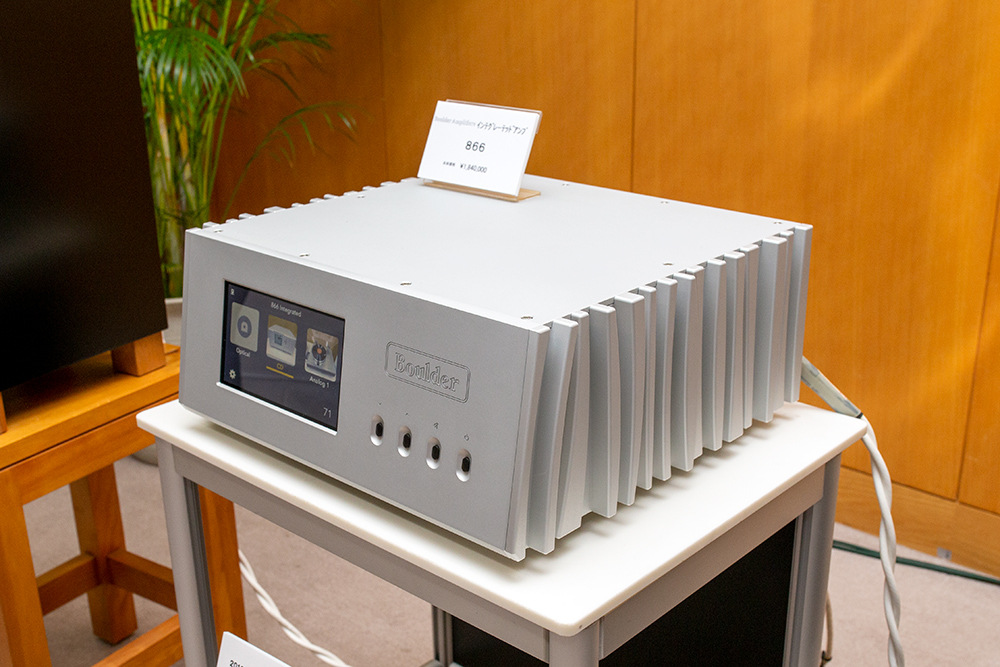 Finally, a product from the US of A -- the Boulder Amplifiers 866 integrated amplifier, featuring a design aesthetic that is, well, interesting. With continuous power output of 200Wpc into 8 ohms or 400Wpc into 4 ohms, and peak power of 700Wpc into 2 ohms, the 866 should be able to drive almost any loudspeaker easily. On its backside are three pairs of balanced XLR inputs and no single-ended RCA inputs, which is Boulder’s way of telling you that balanced connections are the best way to go. On the front is a color touchscreen that “displays all of the available inputs and setup features in addition to the amplifier’s status and setup modes.” There’s also an Android app available that allows for control of the 866, as well as the ability to upload photos to show on the front panel as the input sources.