There weren’t as many introductions of speakers as there were electronics, but there were still some very exciting and important new speakers showcased at TIAS 2016. I’ve highlighted them in this article. All prices in Japanese yen (¥). 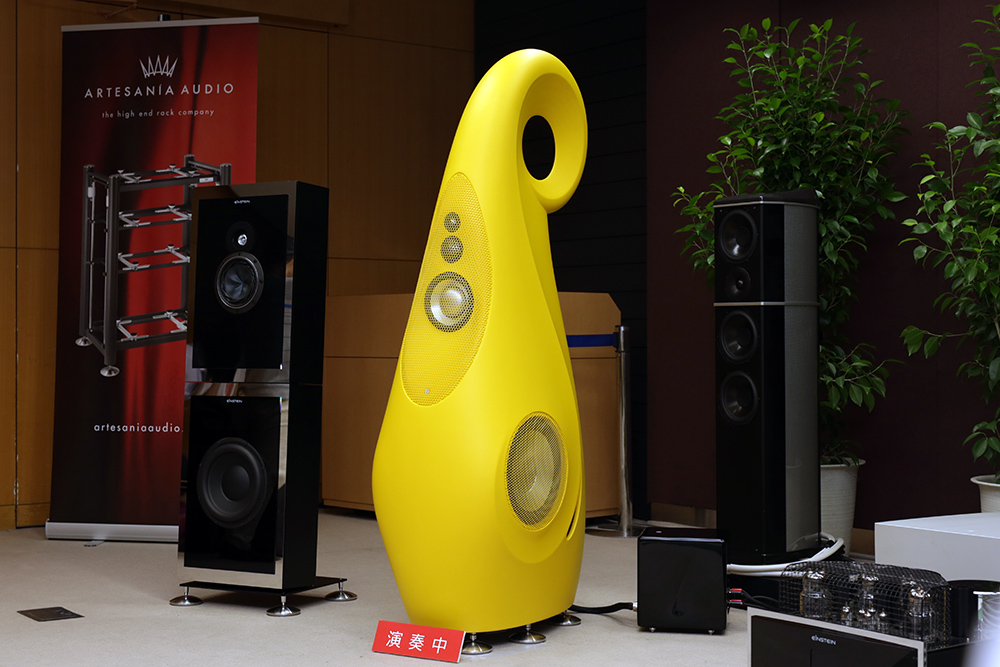 The folks at Vivid Audio kept the introduction of the new Giya G1 Spirit a secret before TIAS 2016, but then made a big splash in Japan by showcasing the company’s latest flagship in a bright-yellow finish that couldn’t be missed. Designed in Britain and built in South Africa, the G1 Spirit is like “the G1 on steroids,” according to designer Laurence Dickie. In comparison to the G1, which remains in the line, the G1 Spirit has a shorter, fatter-at-the-bottom cabinet that puts the tweeter and midrange at a better listening height; an improved lower-midrange driver with a new magnet system that purportedly exhibits lower distortion; and new woofers with much beefier motor systems that have twice the power-handling capability, which gives them more “shove,” as Dickie likes to say. Dickie also told me that, while designing the B1 Decade’s crossover, he learned some new things that he could implement in the crossover here. Since the Giya G1 Spirit is so new, no Japanese price has been established, but Dickie figured it should be about ¥9,000,000 per pair. 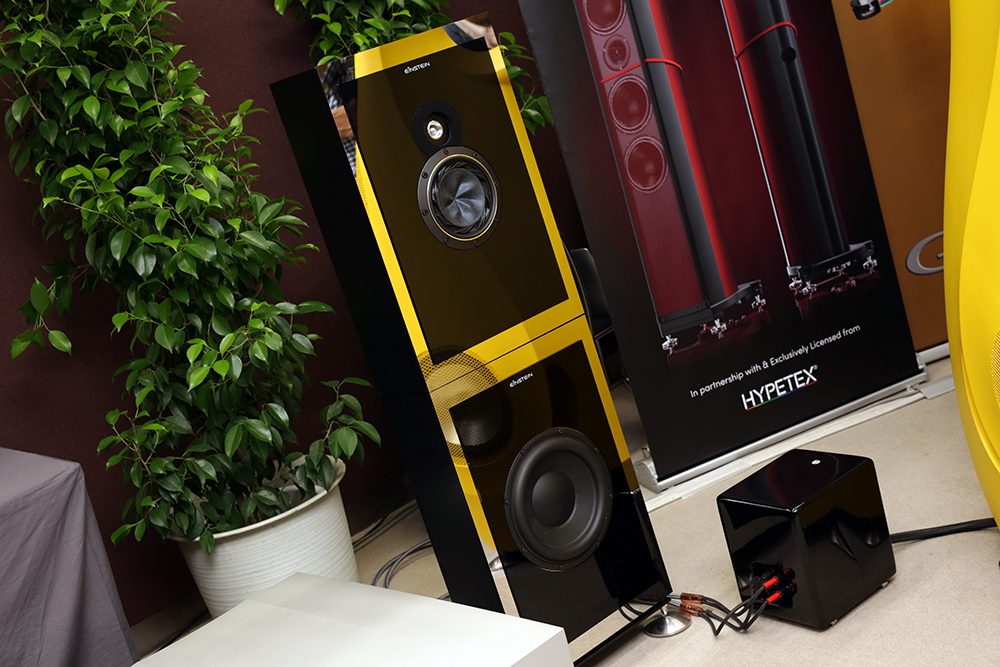 The Pure, which sells for ¥7,500,000 per pair, comes from Einstein, a company based in Germany that’s known mainly for its very high quality tube-based electronics. The Pure is the company’s only speaker, and it’s a three-way design with a powered bass section that has a 700W amp driving a 10” woofer. The bass section is adjustable for output level and crossover frequency. The midrange and tweeter are both made by Fostex. The tweeter is horn-loaded and can be level adjusted. The midrange operates without any electrical crossover components -- it’s allowed to extend as high and low as it can, with its upper- and lower-frequency rolloffs controlled by the driver’s mechanical characteristics. As for the Pure’s color, in the photo it appears to have a yellow border on the baffle, but that’s because its shiny chrome surface is reflecting the color of the G1 Spirit that was beside it when I shot the picture. For a more accurate look at the Pure’s color, see the G1 Spirit photo above. (I tried and tried to lose that reflection, but the only way I could have done it was to move the G1 Spirit, which no one was going to allow me to do.) 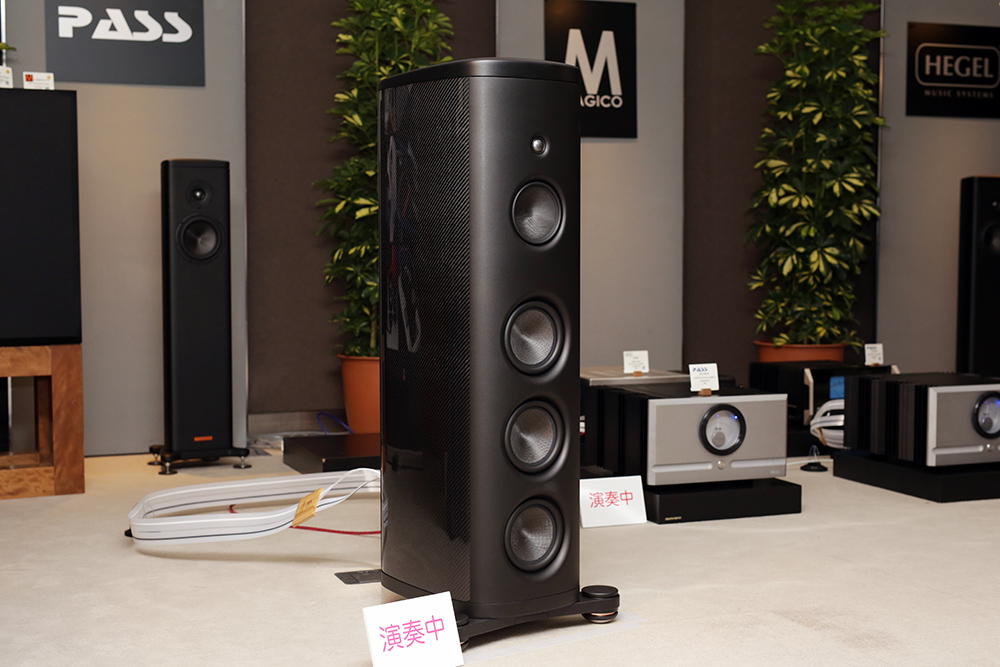 Magico’s M3 was announced in the spring, so we’ve known about it for a long time. But TIAS 2016 marked the first public showing of it. In Japan, the M3 sells for ¥9,500,000 per pair. What the M3 looks like is a scaled-down M Pro, which was a limited-edition speaker that Magico offered about two years ago (only 50 pairs were made). The M3 is a three-way design with a 1” tweeter, a 6” midrange driver, and three 7” woofers. The tweeter has a beryllium dome with a diamond coating applied to it. The midrange and woofers have carbon-fiber cones with a graphene coating. The cabinet is made from aluminum and carbon fiber. The M3 and M Pro are the only two Magicos to date that use this combination (the rest use aluminum only), though Magico’s founder, Alon Wolf, told me that carbon fiber will play an ever-increasing role in future speaker designs from his company. Insofar as the appearance of the M3 goes, I think this is Magico’s best-looking speaker yet. How it sounds, though, was difficult to gauge, as it was really tough to get a good spot to listen in the room, which was almost always very crowded. 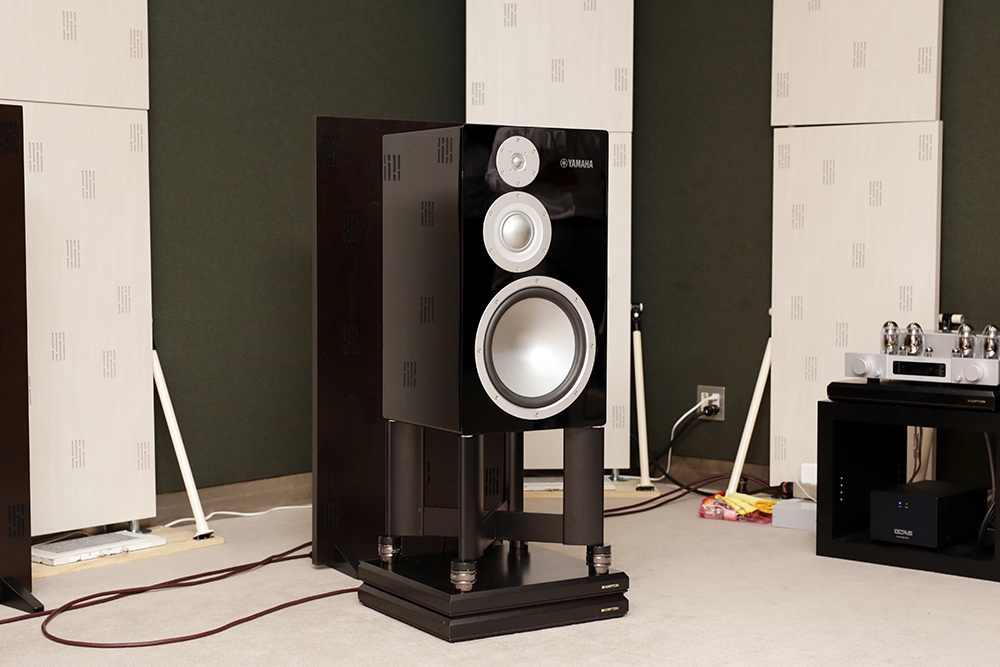 One of the most intriguing speakers I saw at TIAS 2016 was the new Yamaha NS-5000, a three-way design inspired by the legendary NS-1000, which was released in 1974 and contained the world’s first pure-beryllium diaphragms (its midrange and tweeter). These days, beryllium is really popular for tweeters. Surprisingly, beryllium is not used for the NS-5000. Instead, . . . 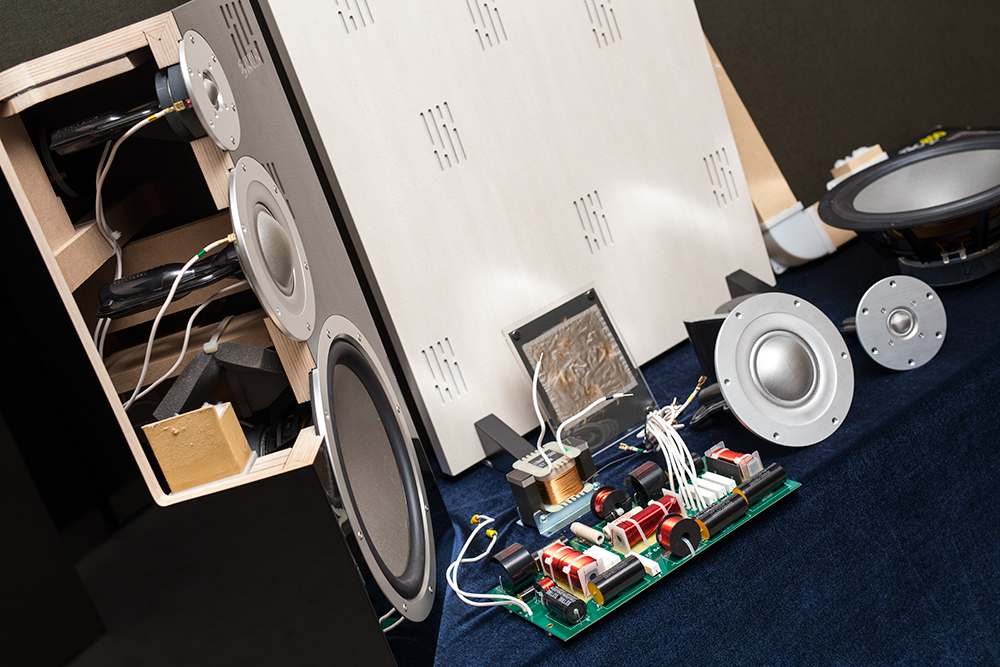 . . . the 3cm dome tweeter, 8cm dome midrange, and 30cm woofer cone are made from a material called Zylon that’s coated with Monel, an alloy composed of 70 percent nickel and 30 percent copper. Directly behind the tweeter and midrange are acoustical absorbers, meant to attenuate the rearward energy from those drivers, much the way Vivid does with its drivers. Inside the plywood-based cabinet is something like a transmission line, likely to attenuate any standing waves that build up in there. The drivers are mounted asymmetrically on the front of the cabinet, so the NS-5000 comes in mirror-imaged pairs (the way they played them had the midranges and tweeters inward). The list of the NS-5000’s novel features goes on, but I’ll simply say this: the pair sounded fantastic (I was able to get a good spot to listen), and I was particularly taken with the strikingly clear midrange sound that I heard through numerous recordings while I was there. The NS-5000 sells for ¥1,500,000 per pair. 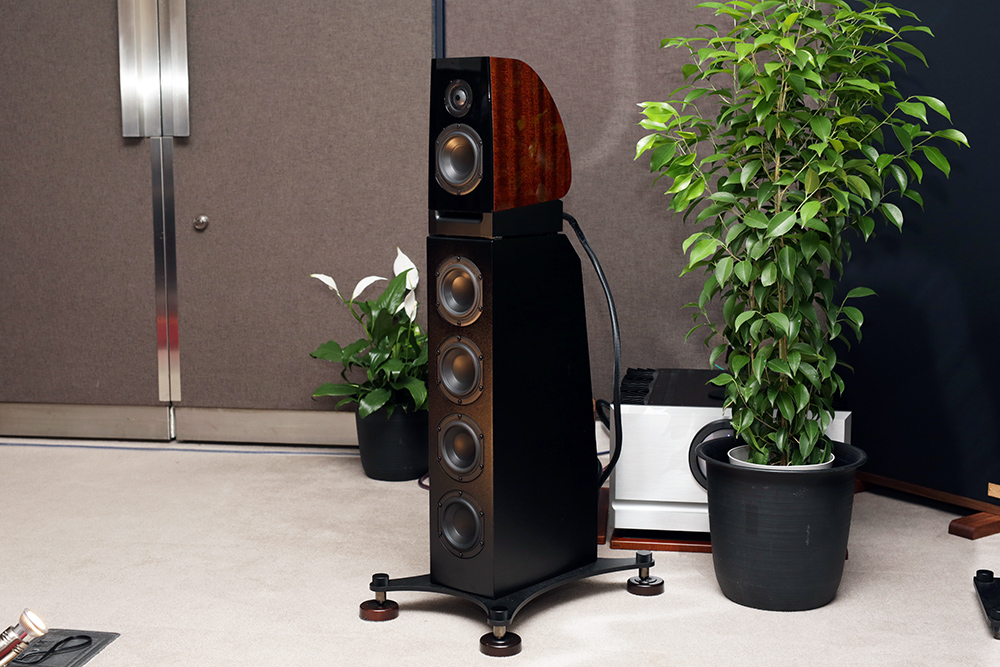 A rather odd little floorstander I saw that also sounded surprisingly good was the HB-G1 from Kiso Acoustic, based in Japan. The HB-G1 is a three-way design that uses four 10cm Peerless drivers for the bass, one 10cm Peerless driver for the midrange, and a 26mm Scan-Speak tweeter for the highs. The crossover is mounted externally, in a fairly large wooden box. One interesting thing I gleaned while I was there has to do with the way the wood-based cabinet is constructed -- it appears the company’s goal isn’t to make the cabinet as inert as possible, like so many others do, but to have it resonate similarly to a musical instrument, such as a guitar. This isn’t the first company to go this route, but doing so is a rather controversial thing when it comes to speaker design. But what took me by surprise was how clean, spacious, and refined the pair sounded. Maybe they’re onto something? The HB-G1 sells for ¥4,500,000 per pair, which I thought quite pricey for such small floorstanders, even though they sounded nice. The company also makes two tiny two-ways: the HB-1 and the HB-X1. They look the same (I was told their crossovers differ) and are priced identically: ¥1,300,000 per pair. Again, pretty expensive for such small speakers -- but, hey, have a listen if you can and see if they float your boat. Like I said, I was taken with the sound of the HB-G1. 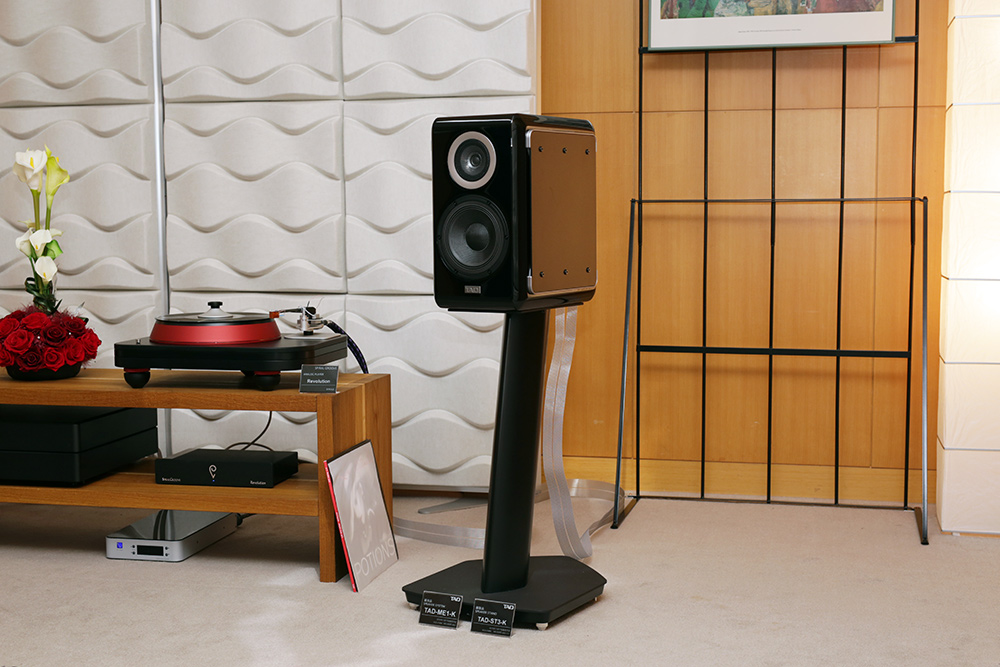 TAD (Technical Audio Devices) used TIAS 2016 to officially debut the ME1 (Micro Evolution One) stand-mounted loudspeaker (a prototype was on display at CES 2016). Priced at ¥1,000,000 per pair, the ME1 is the third speaker in the company’s Evolution series and is more or less the little brother of the CE1 (Compact Evolution One). A dedicated stand for the ME1, the ST3, is available for ¥106,000 per pair. Like TAD’s other speakers, the ME1 has a dual-concentric tweeter-midrange array, which, in this model’s case, measures 9cm across. The midrange and tweeter diaphragms are made from an alloy of beryllium and magnesium. The newly developed woofer has a 16cm carbon-fiber cone. Similar to the CE1, the ME1 has side-mounted ports with metal slabs mounted close to the side walls, but not right on them, which leaves a gap (3mm, to be exact). In turn, the slabs deflect the outputs from the ports to the speaker’s front and rear. 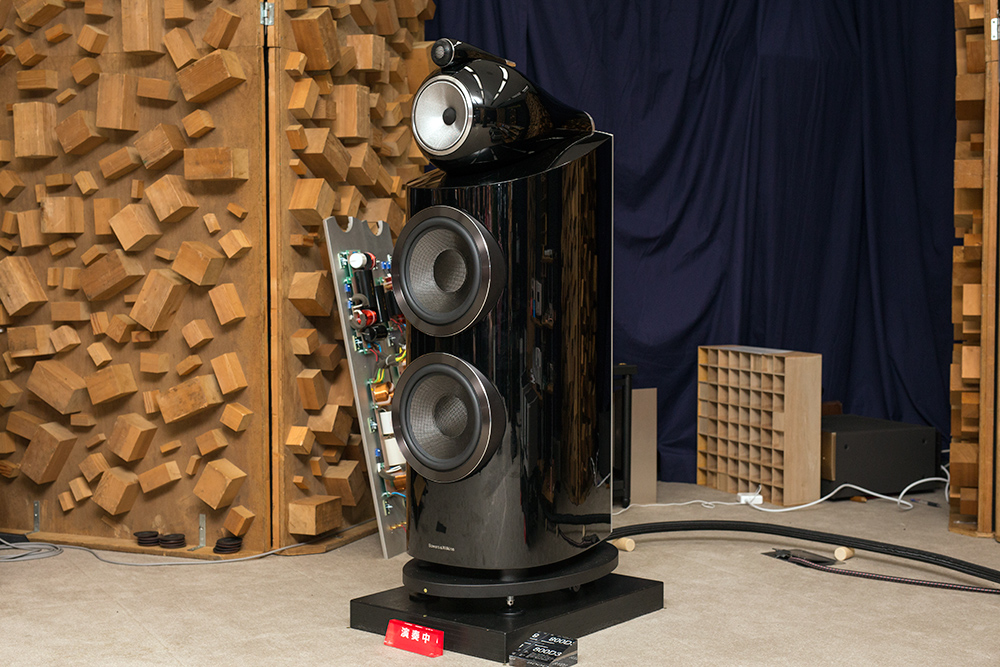 Bowers & Wilkins (B&W) had a number of the 800-series speakers on hand at this show, but the one I zeroed in on was the 800 D3, the newest of the bunch and the flagship of the range. The 800 D3 sells in Japan from ¥2,295,000 to ¥2,430,000 per pair, depending on finish, and is a three-way design. I could describe a lot of the technical details about the 800 D3 because there are many interesting features about it, but the real standout thing is the Continuum midrange cone. For as long as I’ve known B&W (I bought my first pair of the company’s speakers in 1986, but I started eyeing its products in 1981), it’s used Kevlar for the midrange cones in its 800 range. Going to a new material is a real departure. But the company supposedly did it because the materials used to create the Continuum cone behave much better at the break-up point than Kevlar did. The other thing that caught my eye was the aluminum slab on the speaker’s back -- it looks fantastic, but it also looks like something an internal amplifier could attach to and use as a heatsink. Will we one day see a fully active 800-series speaker? Time will tell . . .