T.H.E. Show Newport Beach, Southern California's biggest consumer audio show, took place last week at Hotel Irvine. These regional shows have come into prominence recently as a way for audio enthusiasts to easily hear lots of new gear -- something that's not so easy to do otherwise, as the number of brick-and-mortar audio retailers has decreased. Unlike trade shows such as CES, regional shows are rarely used to launch new products, but they often function as the first public demos of products just coming onto the market.

The first segment of my coverage of T.H.E. Show featured headphones and headphone amps. This article highlights some of the new (or new-ish) speakers I saw, presented below in alphabetical order. All prices are in US dollars.

As in my headphone article, I have to stress that this article isn't comprehensive. Even in two and a half days at T.H.E. Show, I couldn't come close to covering all of the audio exhibits. Apologies to manufacturers I missed or had to omit. 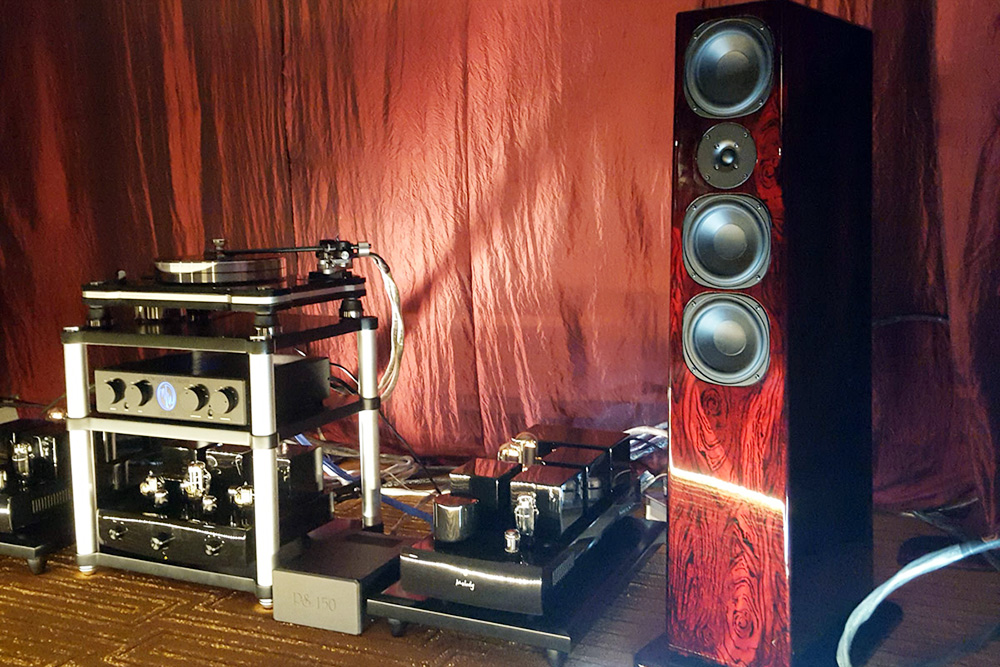 When I glanced at the Seraphim tower speaker in Angel City Audio's room, it looked too generic to merit a listen -- but as I was surveying the new FiiO products in the nearby XLO room, the pair of Seraphims playing there started to catch my attention. And then I encountered audio writer/raconteur Roger Skoff practically dragging cable manufacturer Ray Kimber into the room to hear them. The dynamics and clarity were simply stunning. The Seraphim starts at $7999/pair in satin black. The pair shown here, which were playing in the Skogrand Cables room, feature piano-finished cocobolo veneer and cost $10,999/pair. 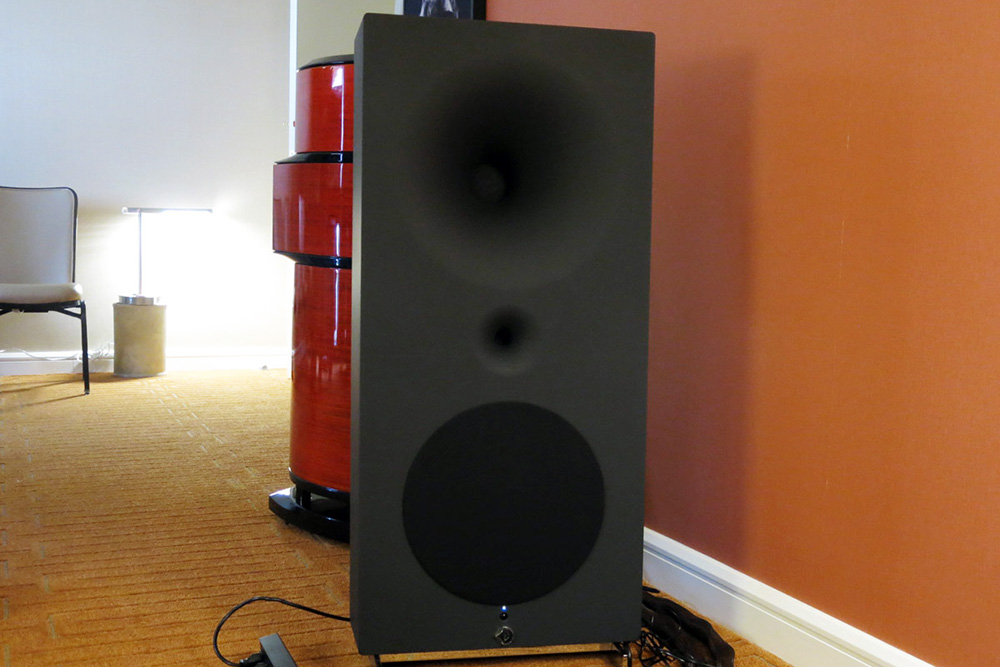 Audiophiles know Avantgarde Acoustic for huge, multihorn speakers painted in gleaming automotive finishes, so seeing the matte-black, relatively décor-friendly Zero 1 came as a bit of a shock. What's more shocking is that the $18,500/pair Zero 1 employs advanced digital technology. The master speaker in the system incorporates a preamp and DAC, and an amp for each driver (50W for the horn tweeter and midrange drivers, 250W for the woofer). The slave speaker connects to the master wirelessly. I loved the effortless dynamics of the original Avantgarde models, and I was happy to hear that the Zero 1 continues that tradition. 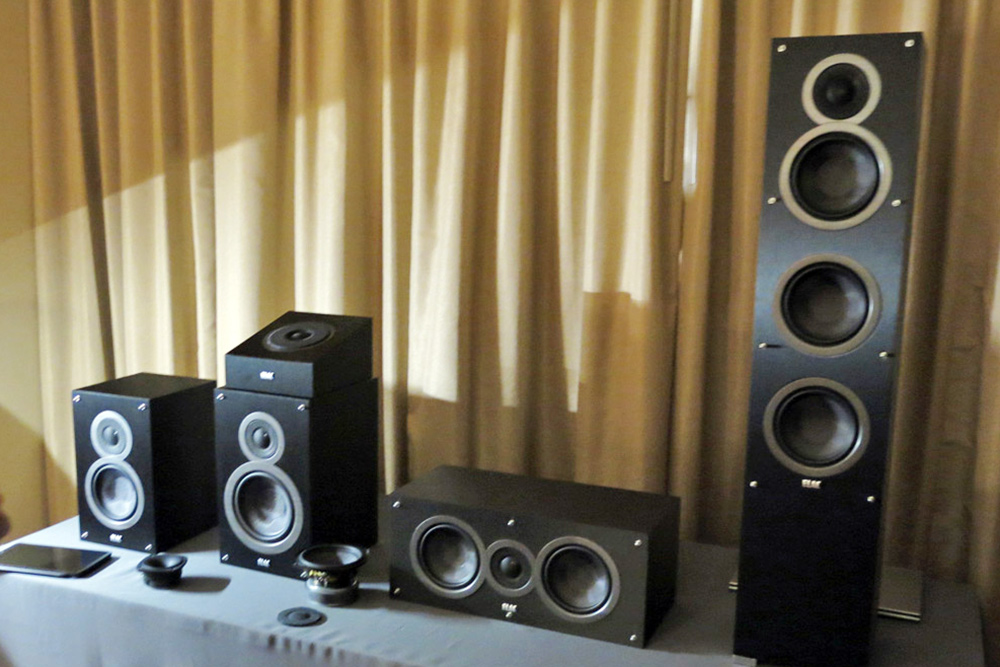 The buzz of T.H.E. Show was also the most inexpensive line: Elac's new Debut speakers by Andrew Jones. Audiophiles know Jones for his lines of incredibly good budget speakers for Pioneer and incredibly good, cost-no-object speakers for TAD. The line comprises two bookshelf models, a tower speaker, a center speaker, an add-on module for Dolby Atmos, and three powered subwoofers. Prices for the main speakers range from $229/pair for the B5, a two-way with one 5.25" woofer (shown at far left), to $559/pair for the F5 tower speaker (far right). Jones's demo of the Debut B5 was amazing -- to the best of my acoustic recollection, it's much like his now-famous Pioneer SP-BS22-LR, but with somewhat clearer highs and much better and deeper bass. 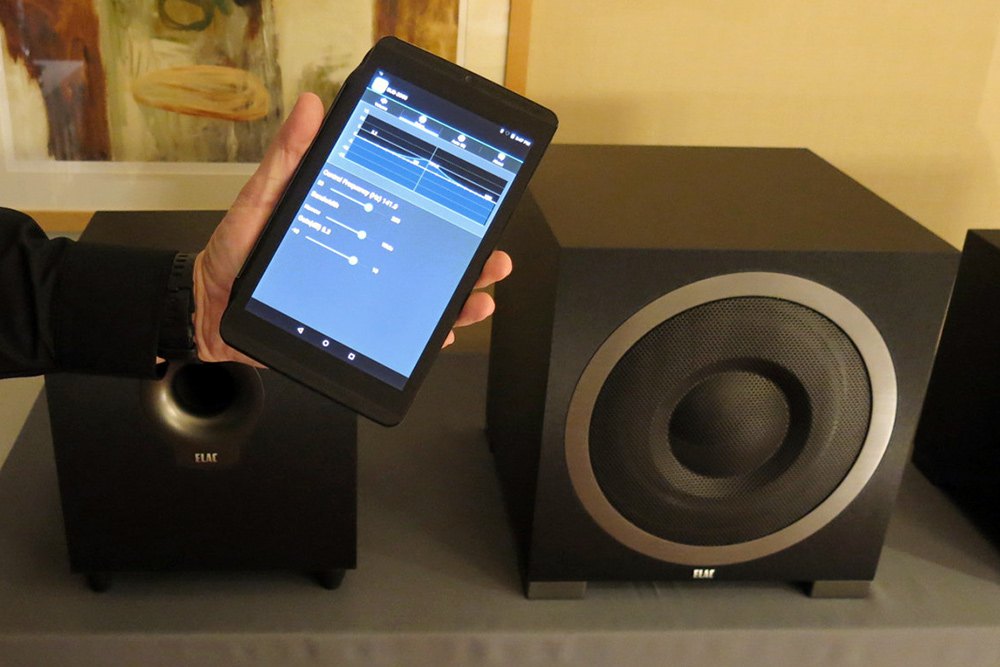 Elac also showed three Andrew Jones-designed subwoofers. The two top models, the $499 S10EQ (shown at right) and $699 S12EQ, both feature an innovative auto-calibration technology that uses an iOS or Android smartphone or tablet. You start by holding the phone or tablet close to the sub, and the sub uses test tones to calibrate your handheld device's microphone. Then you go back to your listening position and let the auto-calibration software do its thing. From there, you can tweak the response manually onscreen. The S10EQ has a 10" driver and a 400W amp, while the S12EQ has a 12" driver and a 1000W amp. There's also a budget model with no EQ, the $249 S10 (shown at left). 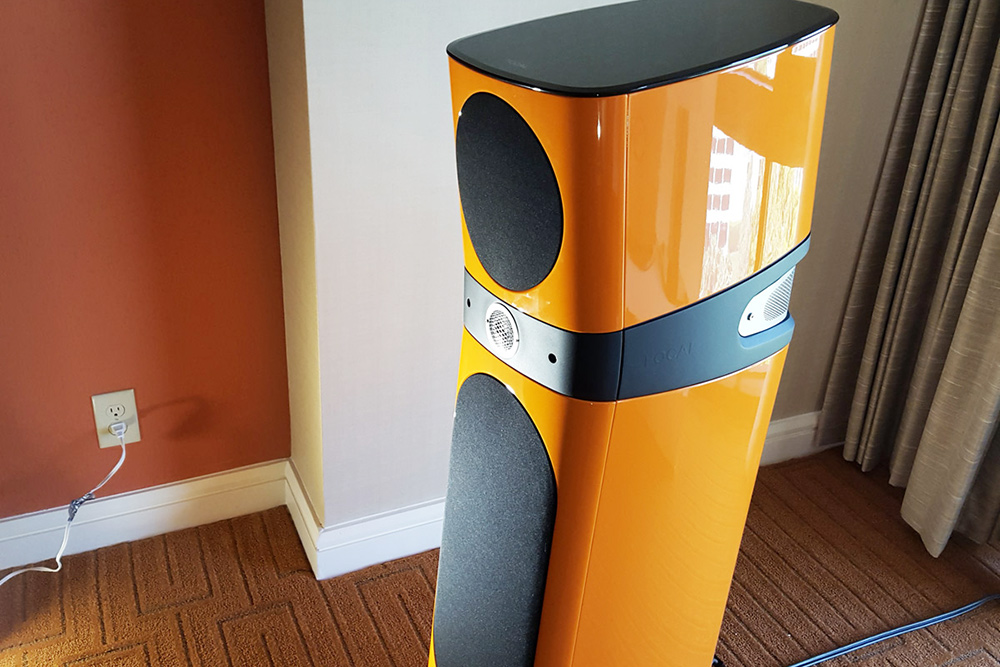 The $13,999/pair Sopra N°2 is not only the most beautifully designed Focal speaker yet (which is saying a lot); it's also one of the most advanced. The tweeter has a transmission-line-style enclosure that dissipates its back wave so it can't interfere with the driver. The surround on the midrange driver has a denser rubber-ring section that acts as a tuned damper intended to prevent the usual distortions that arise when the surround is pushed to its limits. There's also a bookshelf version, the $8999 Sopra N°1. 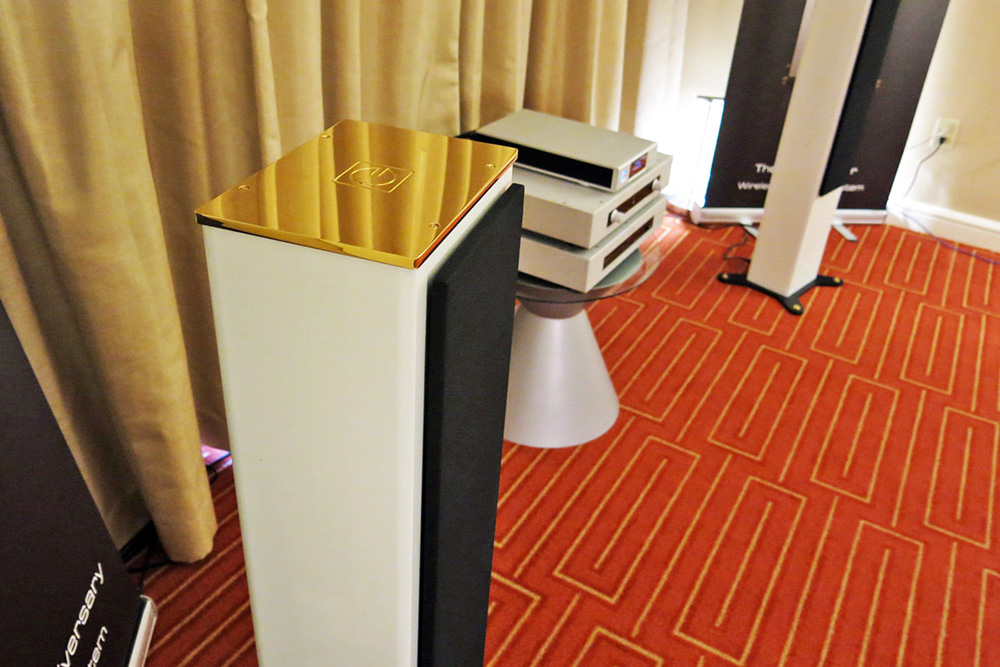 Goldmund's new Logos Tower combines living-room-friendly design with the company's advanced digital technology and deader-than-concrete braced-aluminum enclosures. The $20,000/pair speaker incorporates two 175W class-AB amplifiers, each driving a 1" tweeter and a 6.5" midrange-woofer. Digital signal processing performs the crossover functions and corrects each speaker’s phase and time response. Use the speakers' digital inputs with the digital source of your choice, or use the included USB dongle to stream wirelessly. 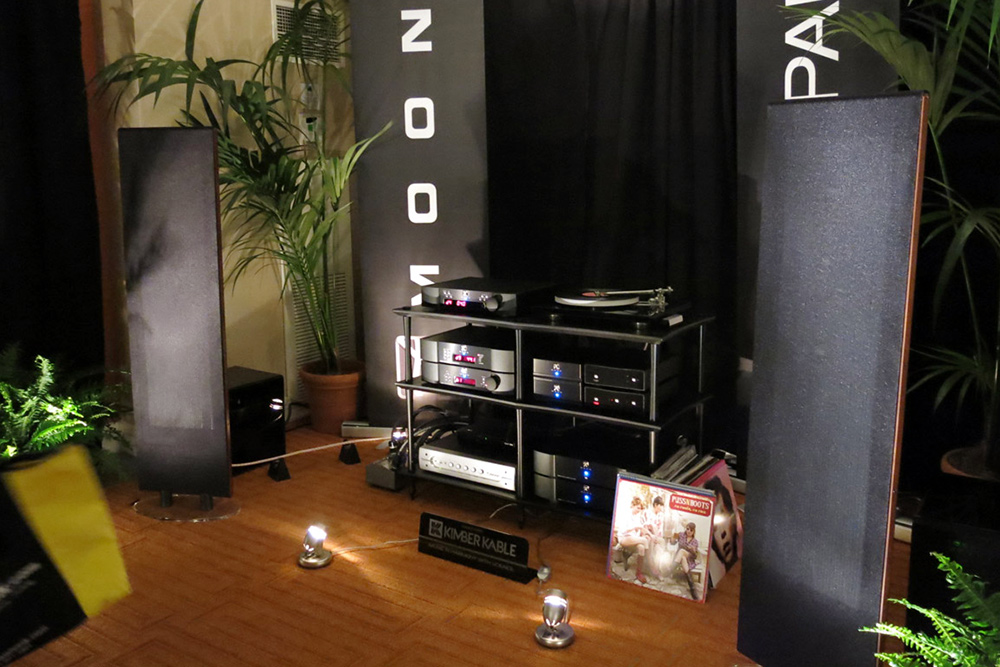 It seems Magnepan's story is always the same: audiophile-grade sound at affordable prices. The $1400/pair .7 is a full-range planar-magnetic speaker that, like other Magnepans, delivers a colossal, seamless, natural soundstage. The .7's panels can't move a whole lot of air, though, so you will probably want to supplement them with a subwoofer; this demo used the JL Audio Fathom v2. 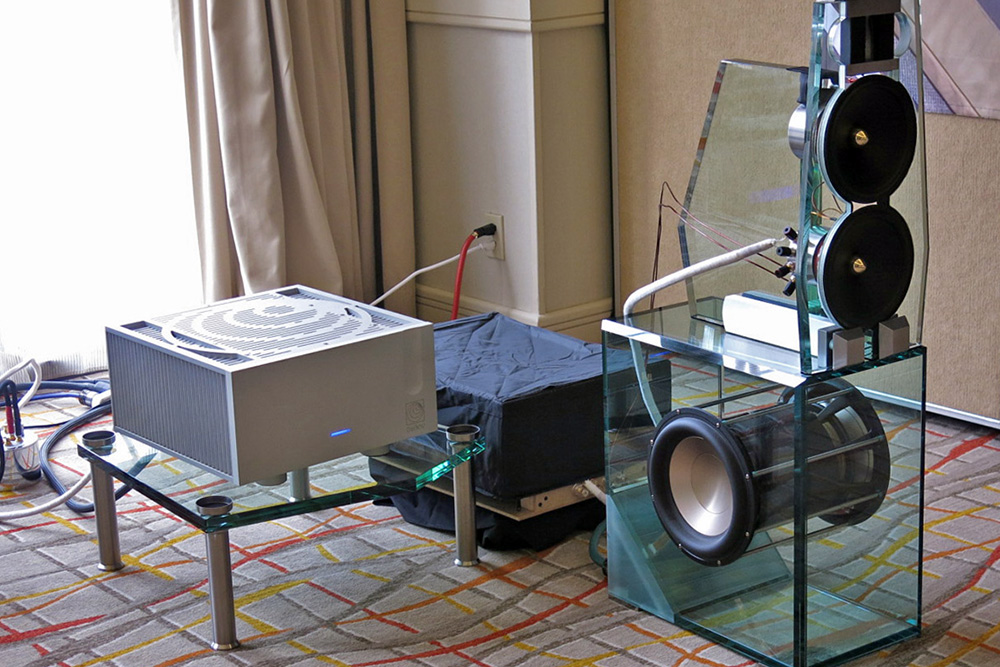 Speakers made from thick slabs of glass aren't uncommon, but Perfect8 Technologies' new $100,000/pair The Point Mk3 is. It uses a full ribbon tweeter instead of the Mk2's AMT tweeter. The open-back drivers attach not to the front baffle, but to the vertical glass "fin" behind the baffle. The crossover is housed in a separate enclosure (covered with black fabric here because it's a prototype and the industrial design isn't finished). The opaque section in the bottom of the speaker is a class-D amplifier that supplies 400W of power to each of the horizontally opposed 10" woofers; in this room, Ypsilon Aelius amps powered the midrange-woofers and tweeters. When Diana Krall's recording of "California Dreaming" played, I was shocked to hear that I could barely localize either speaker; I can remember few speakers that "disappeared into the room" sonically the way this one did. 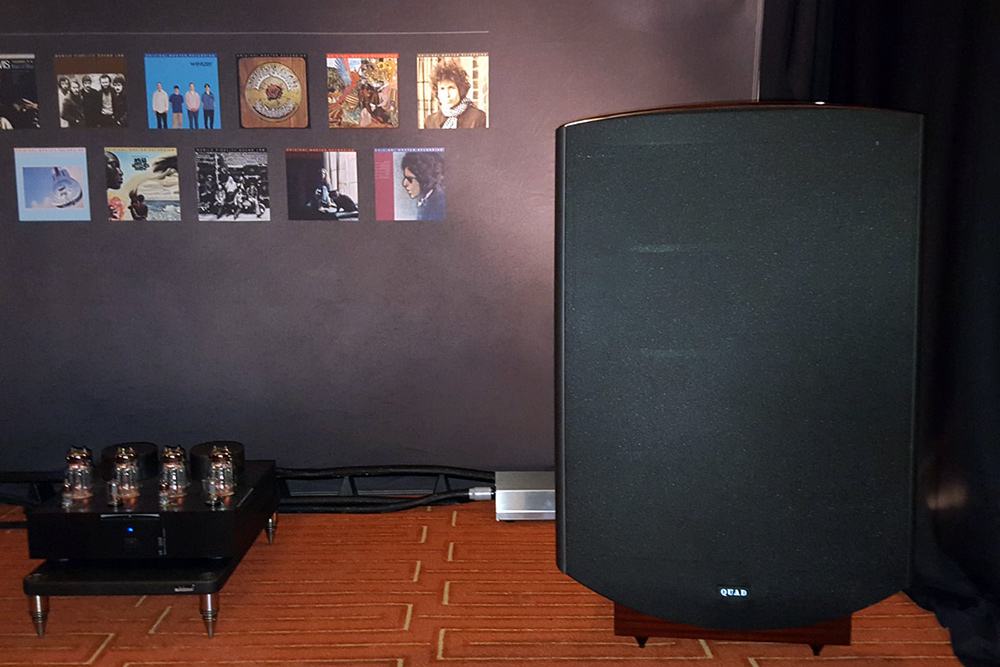 Few, if any, speaker brands are more revered by audiophiles than Quad, yet distribution of Quad in North America has been spotty or non-existent for the last decade or so. Mobile Fidelity Sound Lab intends to re-establish the brand here, and is setting up dealers and a service network. It was sheer joy to hear the huge soundstage, uncolored midrange, and smooth, natural highs of the $11,999/pair Quad ESL 2812 electrostatic speaker shown here, driven by Balanced Audio Technology's $6995 VK-55SE amp. 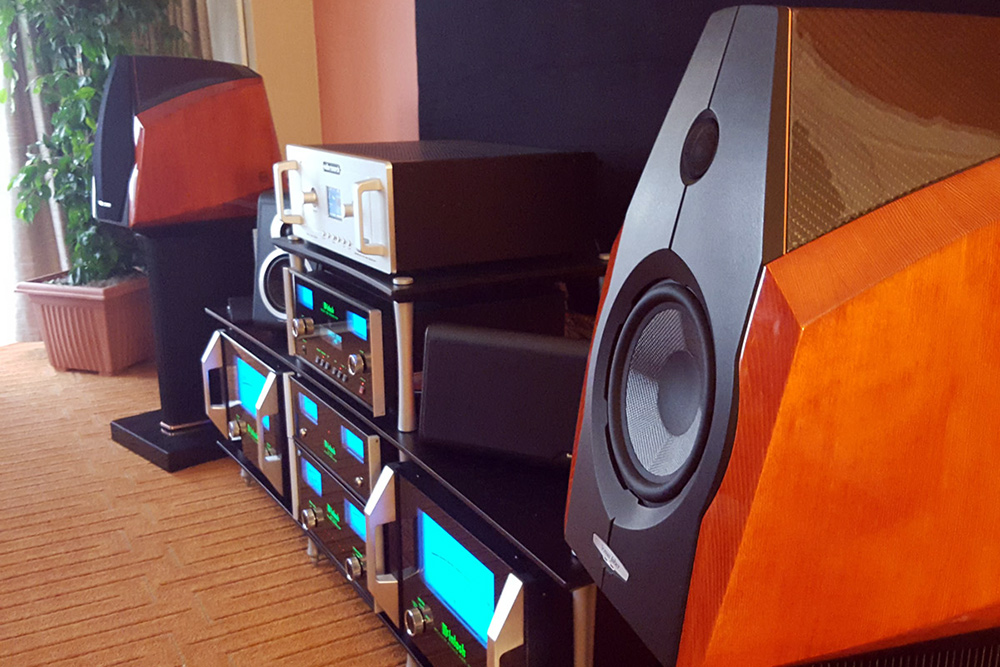 No question about it: the most lustworthy speaker at T.H.E. Show Newport was the Sonus Faber Ex3ma, a limited-edition, thoroughly modernized version of what I think was the world's first over-$10,000/pair bookshelf speaker, the Extrema, introduced back in the early 1990s. I loved the Extrema back then, and I loved the Ex3ma at T.H.E. Show. It's a two-way model with a gorgeous enclosure made from wood and carbon fiber. The passive radiator on the back has a voice coil connected to a switchable resistor network that provides adjustable damping for the radiator. Appropriately, each speaker comes in a leather-clad flight case. The US price isn't set, but from what I heard, the Ex3ma could set you back $60,000/pair. Act fast, because the company made only 30 pairs, with only three earmarked for the US. 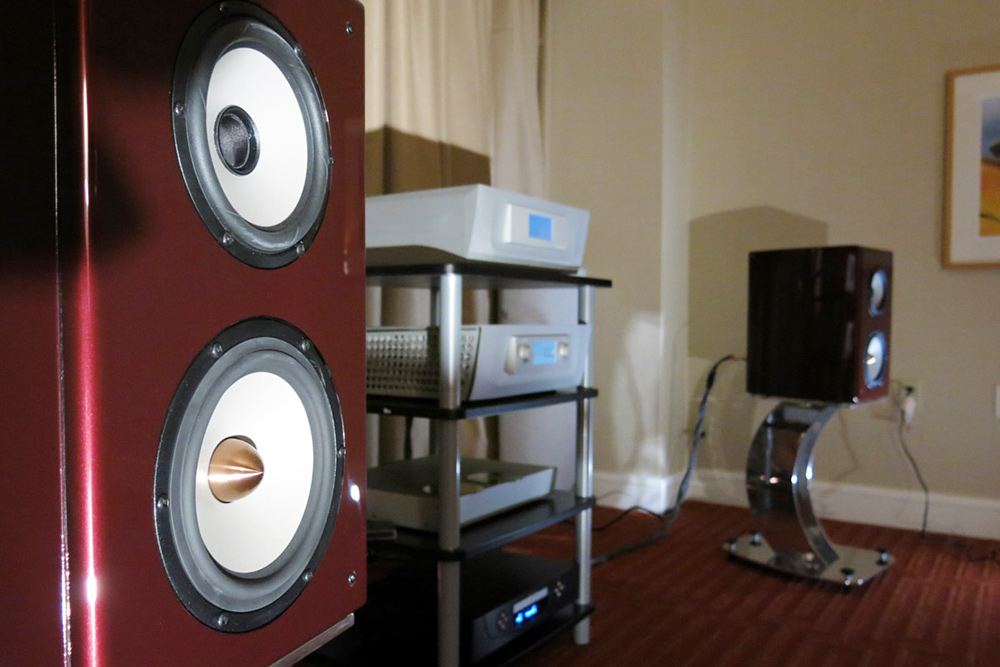 Designer Albert Von Schweikert has been quietly building conservatively designed yet outstanding speakers for about two decades. T.H.E. Show saw the debut of a couple of new models: the VR-55 flagship model and the Unifield 2 Signature (shown here). The $25,000/pair Unifield 2 Signature reflects Von Schweikert's recent foray into coaxial drivers. Because the drivers all share the same vertical plane, it's phase-coherent; Von Schweikert's use of fourth-order crossovers sacrifices time coherency but allows greater power handling and lower distortion than would be possible with a time-coherent first-order crossover. Driven by a Constellation Audio Argo solid-state integrated amp, the Unifield 2 Signature certainly had dynamics to spare, and a beautifully natural transition from bass to mids to treble.