A Trio of Super Systems -- When Cost Is No Concern

Did you hear about the new $4.5M Lamborghini supercar? Many did -- the company announced it and it made headlines around the world despite the fact that only a few will ever be built. Obviously, people like to know about expensive stuff just because it's there, not because many can afford it.

Hi-fi is no different. Part of fun of audio shows has to do with seeing and hearing the cost-no-object systems -- Super Systems, the ones that few people buy. And shows such as Salon Son & Image 2013 give you a chance to experience them. There were a few of them at this event, and I made a point of checking them out so that if you couldn't be here to see and hear them, you could still read about them. So what happens when you throw caution to the wind and cost is no concern? 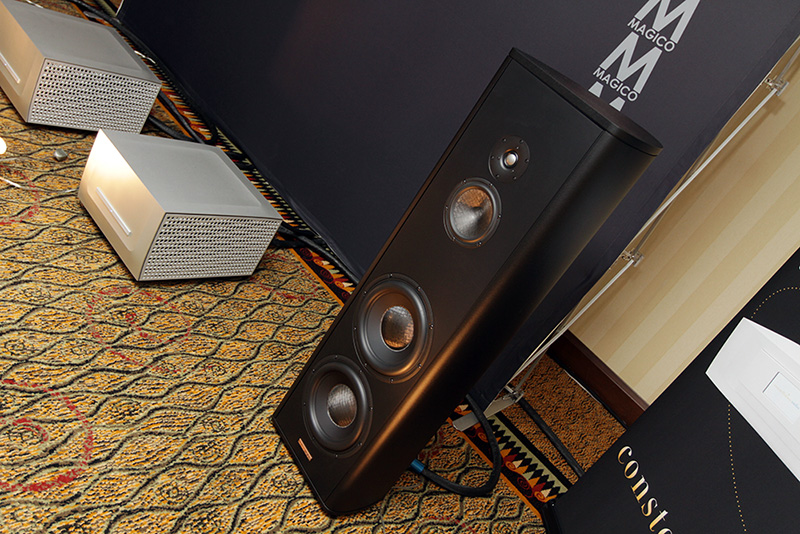 First stop was the Magico / Constellation Audio room, which was a large space located on the lowest level of the Hilton Bonaventure. Showcased center stage were Magico's S5s, which sell in the United States for $29,400 per pair. The electronics, all off to the side, were all by Constellation Audio and cost about $110,000: Centaur mono amps, a Virgo II preamp, and a Cygnus music server. The cables (interconnects, speaker, power) were JPS Labs' Aluminata series and cost $50,000 -- yes, more than the speakers. Perhaps a little unbalanced that way. So the total was approaching 200 grand. 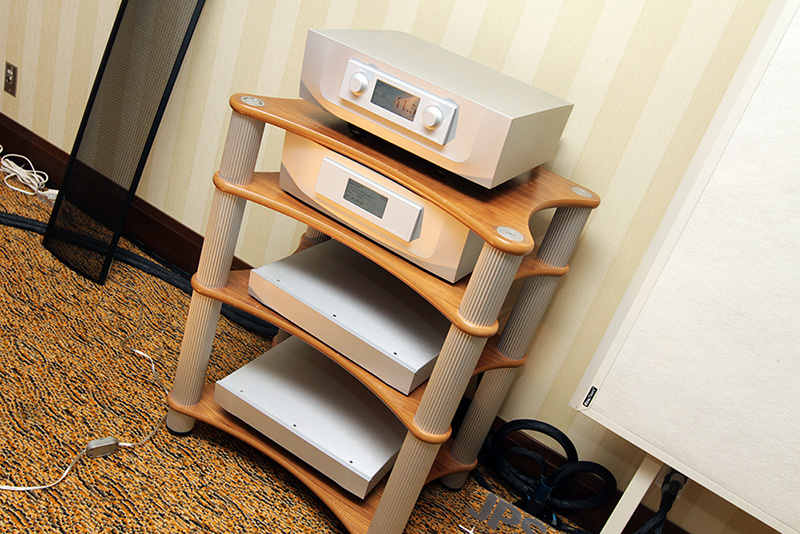 Nevertheless, I can say that this system sounded spectacular with some recordings, although not quite that way with others. It depended, as it always seems to with systems set up quickly at shows. It also wasn't lacking for low-end grunt, and the highs seemed super-refined. All told, the promise was there and if I were looking at a system similar to this one, I'd probably start with the S5s and build back from there. Thirty grand for these speakers doesn't seem out of line at all. The jury's still out for us regarding Constellation Audio, since we've never reviewed anything from them, but a close inspection reveals some well-built, seriously purposeful stuff. But 50 grand for wires, considering the cost of the speakers, is something that gives me pause for thought -- I think you could set yourself up better in that department for less. 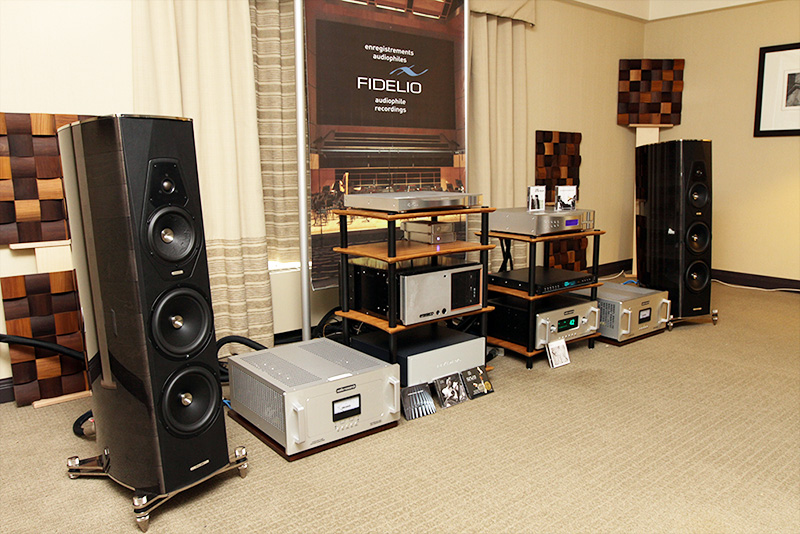 The next stop was the "entry-level" Super System in Fidelio's room. This one was around $125,000, and it comprised Sonus Faber Amati Futura speakers at the front of the line, backed up with electronics from Audio Research, dCS, and Nagra; power cables and conditioners from Shunyata Research; and speaker cables and interconnects from Siltech Cables. Overall, this room sounded pretty darn good, although I wasn't surprised -- Fidelio is a Quebec, Canada-based company making great-sounding recordings, so they always make sure the system they use can best show off their work. Plus, they've used this same room for a few years, and I think they've mastered setting it up -- not insignificant at shows like these ones where the room is a huge variable.

The final stop was the chart-topper -- retailer Filtronique's system, which I'd heard beforehand, was approaching the half-million-dollar mark. The funny thing is, when I did my initial tally I came up with only $350,000 (only). So I enlisted the help of Shunyata Research's Grant Samuelson, who pointed out that I missed a boatload of stuff, so he helped me write it all down and tally it up again. Bingo, I had my half million. 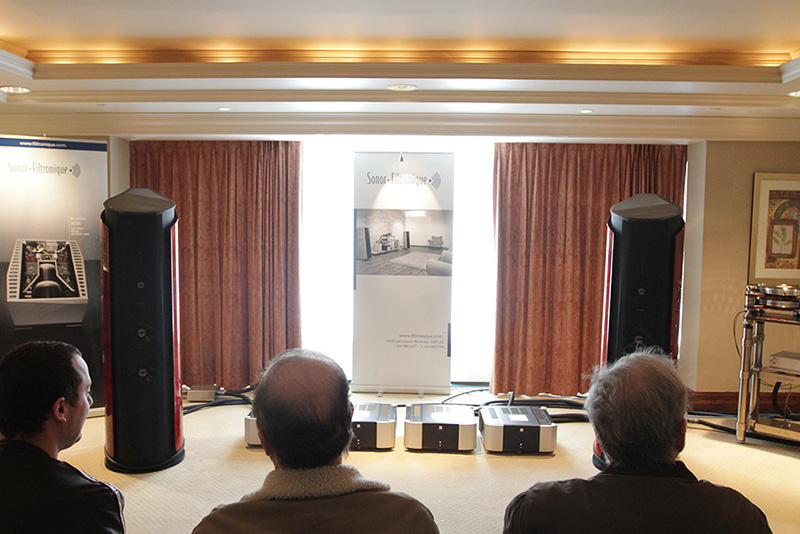 Up front were a pair of Sonus Faber Aida loudspeakers, which sell for $125,000 per pair in the United States. At the other end of the chain there was the dCS four-piece Vivaldi digital stack, which sells for $120,000. So half of the cost of the system is right there. Making up the other half were electronics from Simaudio Moon, Audio Research, and Nagra; power conditioners and power cables from Shunyata Research; interconnects and speaker cables from Siltech Cables; and stands and isolation racks from Harmonic Resolution Systems. There was also a turntable -- that hot Kronos jobbie Jason Thorpe wrote a piece about because he liked it so much. 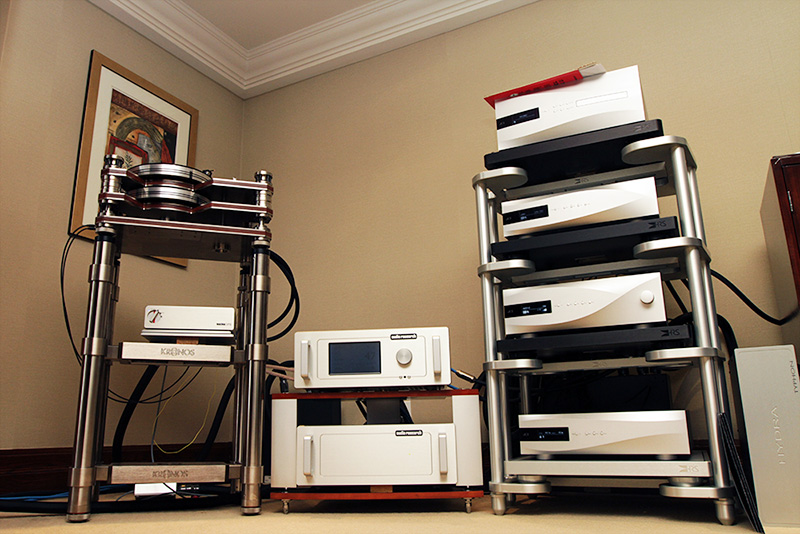 So the burning question is: Did it sound like half a million bucks? My reply: Does it matter? The way I see it, the person who buys a setup like this one is probably the same kind of person who buys that $4.5M Lamborghini -- it's not because they think it's the fastest car in the world, but because it's like a rare piece of art that only a select few can ever afford. In other words, it's a trophy purchase that gives them bragging rights when they showcase it in their home. And in that way, there's no doubt that this system would make a helluva trophy -- all that gear looked absolutely stunning set up in that room. In fact, it looked like a million bucks -- it really did. And you know what? At times it sounded impressive, as it should for that price -- although I certainly can't say that it was the most impressive sound I heard at SSI 2013 this weekend. But, heck, if I were a billionaire with a penchant for showing off my toys, I might pony up for this rig -- and I'd probably look at that Lamborghini too, just because it's there.