I sit down and listen to DeVore Fidelity speakers every chance I get (read: once a year at the Salon Son & Image show). There's something intensely intimate about the sound of these highly efficient, elegant speakers that makes me feel comfortable and warm.

Late last year I was this close to starting the review of a pair of Gibbon 88 speakers, but they'd suffered severe shipping damage and had to be sent back to DeVore Fidelity. So one of the first stops I made on Saturday morning after I'd slammed down a greasy breakfast was the Coup De Foudre room, where John DeVore was demoing his new Orangutan O/93 speakers. 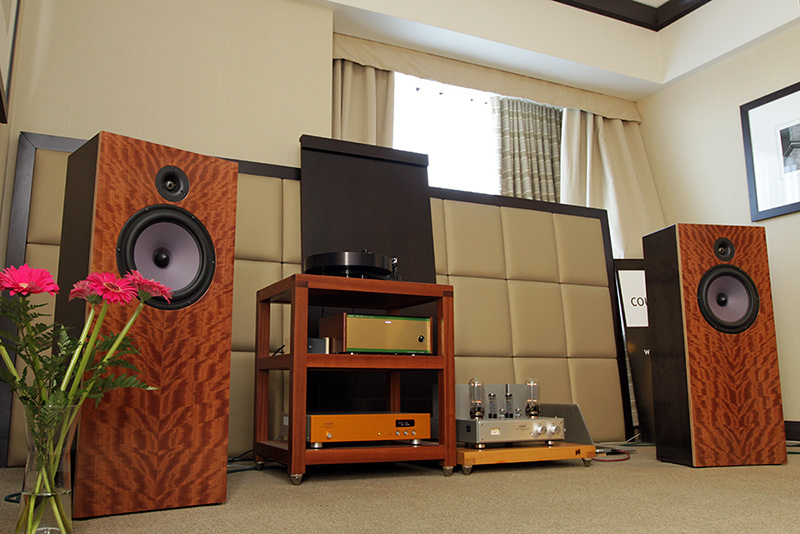 John informed me that he had to come up with a new production process to cut down on finishing time in order to bring the O/93 in at its more reasonable price. It seems that the Russian birch plywood used for the speaker's front baffle is exceedingly finicky and it proved most challenging to get the edges smooth enough to live up to his high standards.

John always plays interesting music. And it's always on vinyl, through tubes. This is my kind of system. As in previous years, the front end consisted of a Brinkmann Bardo turntable and EMT TSD15 cartridge (price of both unavailable). Also carried over from the 2012 show was a Leben RS-30EQ phono stage ($2695). The Line Magnetic LM 218IA, in its über-cool retro hammer-tone finish, looks to be an exceptional deal at $3500.

As usual I spent longer than I should in this room. John was playing an album from the Mississippi Records label -- Alkibar Gignor's La Paix, which sounded like a cross between delta blues and Malian folk music. The O/93s are perfect for this type of minimalist recording. The speakers put forth a vibrant, warm, intimate sound that's long on musical meaning and immediacy and short on edge and grit.

John hinted that a replacement set of Gibbon 88s is set to start their burn-in ordeal. I'm looking forward to telling you about them.