Rocky Mountain Audio Fest, the biggest consumer hi-fi show in North America, wrapped up last Sunday after showcasing numerous new products. I've already covered the headphones and speakers that were introduced at RMAF. In this article, I'll report on some of the most interesting new audio electronics.

This is a big category, encompassing everything from turntables and streamers to amps and Blu-ray players, so rather than attempt a comprehensive effort, I'll focus on 13 products that particularly caught my eye. If you launched a new product that I missed, my apologies; RMAF's simply too big a show for one reporter to cover every room. (Also note that I covered Audio Alchemy's new DPA-1 Mono amp in the Wilson Audio section of the speaker article.) All prices in USD. 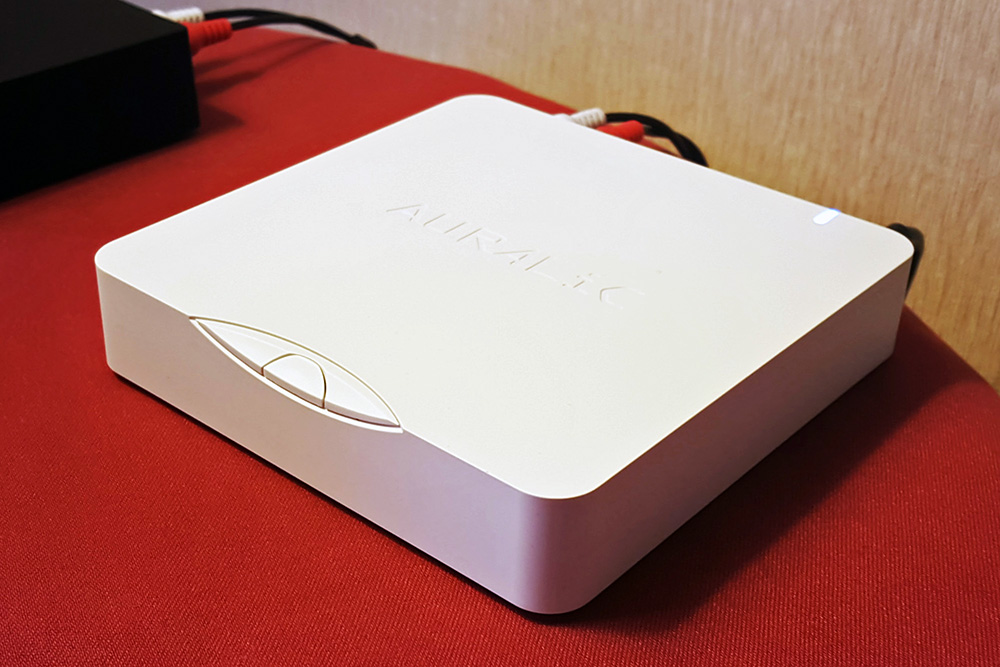 For budget- and technology-minded audiophiles, Auralic's $549 Aries Mini was the hit of the show. Think of it as sort of a high-end audio take on Apple TV. The Mini can stream from any networked hard drive or computer. A year's subscription to Tidal is included, and the Tidal and Internet Radio functions are incorporated into Auralic's iPad app. (An iPhone app is coming, although there are no plans for an Android app.) The unit includes Bluetooth wireless, and it has space for a hard drive up to two terabytes in size so you can store your music right on the Mini. 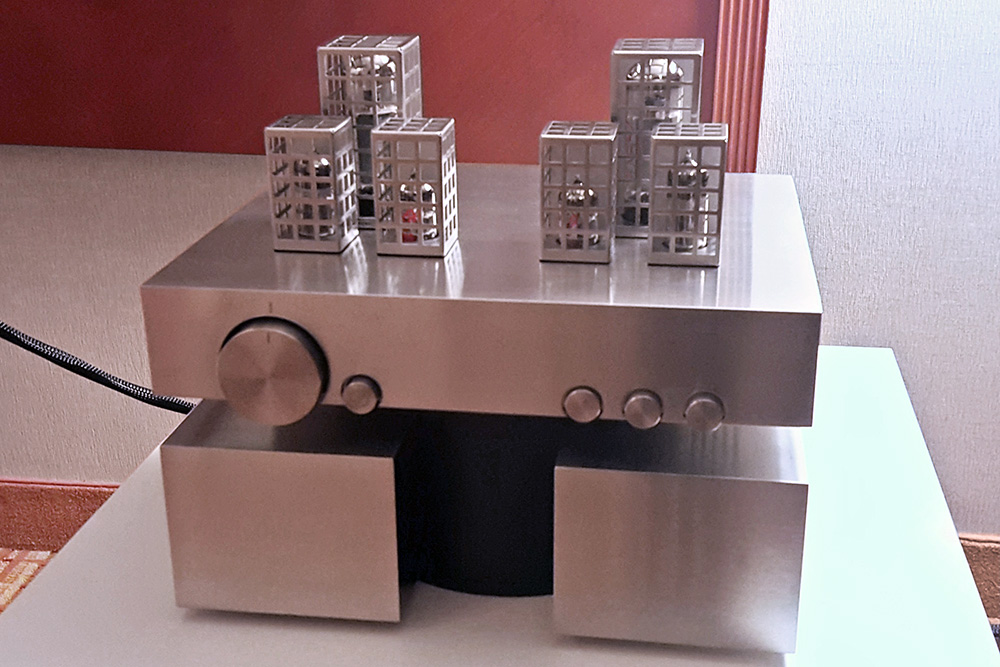 Picking a "best new amp at RMAF" would be a subjective exercise, but "coolest amp at RMAF" would be no contest: the $5999 Block (no model number, only the brand name). The cubes supporting the block house its transformers, isolating them from the electronics above. The single-ended design uses EL34 output tubes and is rated at 5.5Wpc. This integrated amp incorporates a tube phono stage and has two line-level inputs. 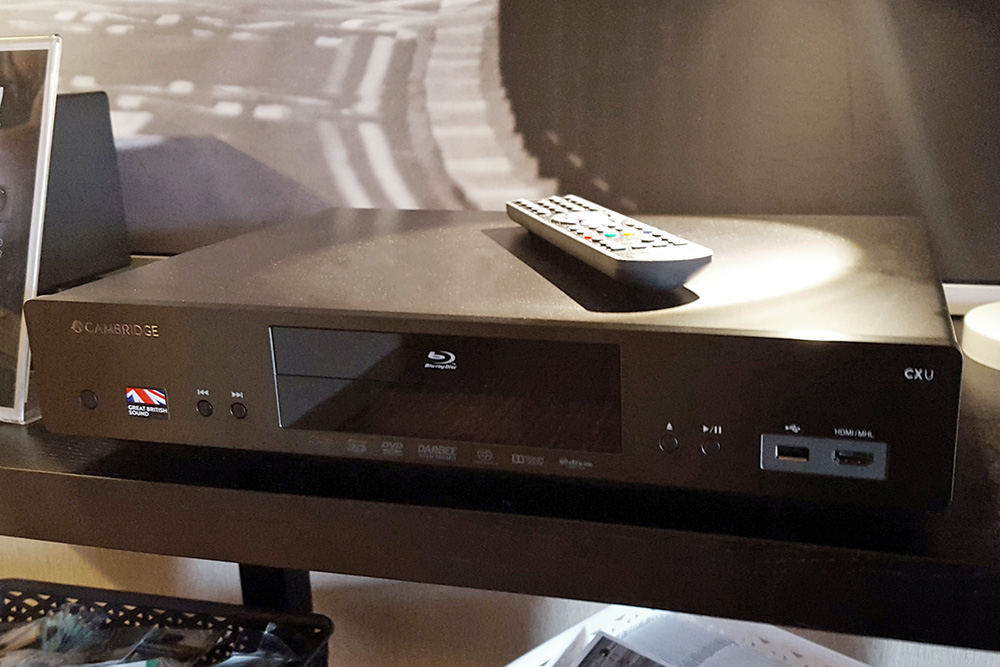 Home theater is almost as rare at RMAF as tube amps in a Bose store, but I did see one nice new piece of surround-sound gear: Cambridge Audio's CXU Blu-ray/SACD player. The $1299 CXU includes five Wolfson DACs and upsamples incoming audio to 24/192 resolution. Through its Ethernet connection, it can function as a networked audio player, accessing music stored on networked hard drives and computers. USB and HDMI inputs (including an MDL-compatible front USB input) allow connection of external devices. Users can browse files through the TV screen or through the PlugPlayer or BubbleUPnP apps (for iOS and Android, respectively). 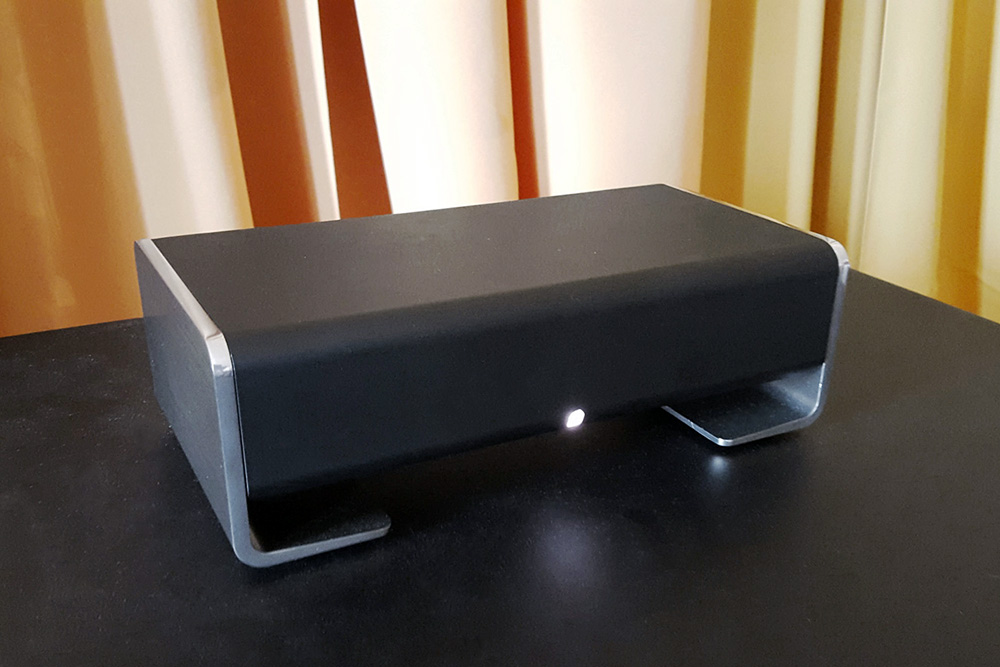 Elac has won fresh attention because it's now the home of famed speaker designer Andrew Jones, but the company's also introducing some innovative new electronics. The $999 Discovery streamer incorporates Roon music-management software and includes a lifetime Roon subscription (which normally costs $500). The Roon code has been rewritten and optimized for the Discovery's internal ARM processor and does not require the use of an external computer. It can access networked hard drives as well as streaming services such as Tidal, Deezer, and Rhapsody. The control app runs on iOS or Android devices. This Discovery includes outputs for three zones, and a future custom-install version will have outputs for eight zones. It also has a digital output for interfacing with external DACs. 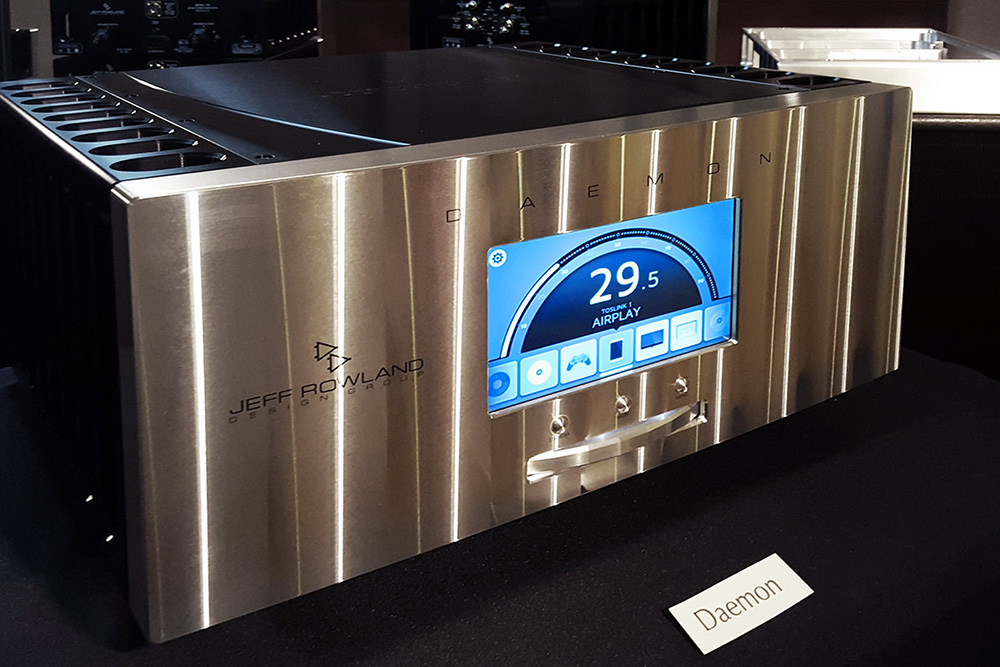 One recent trend in ultra-high-end electronics is to build streaming and file playing into integrated amps, so you have an all-in-one, "just add speakers" system. Jeff Rowland Design Group calls its $38,800 Daemon a "super integrated." The Daemon pumps out 1500Wpc of class-D power, offers 21 audio inputs (including a phono input), and is compatible with Apple's AirPlay multiroom audio standard. You can control it through the front touchscreen or an iOS app. 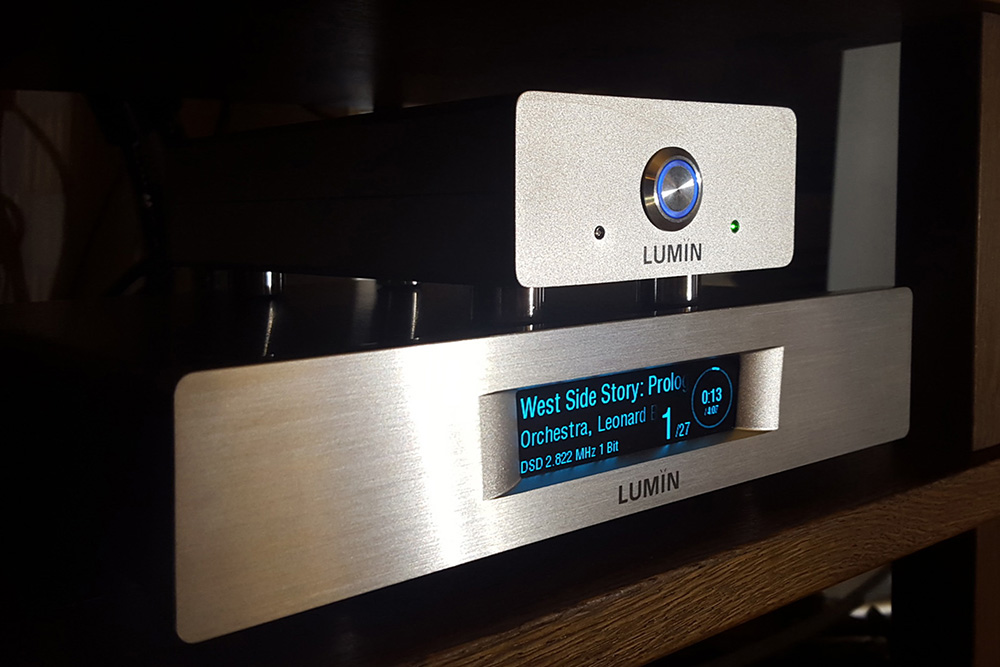 Lumin's D1 network music player brings some of the convenience of Sonos to high-end systems. The $2000 D1 streams all current PCM and DSD formats from networked hard drives and computers, and the included iPad app can control multiple D1s, allowing multiroom high-end audio. XLR balanced outputs and a coaxial digital output are provided. The device on top is the L1, Lumin's networkable hard drive. 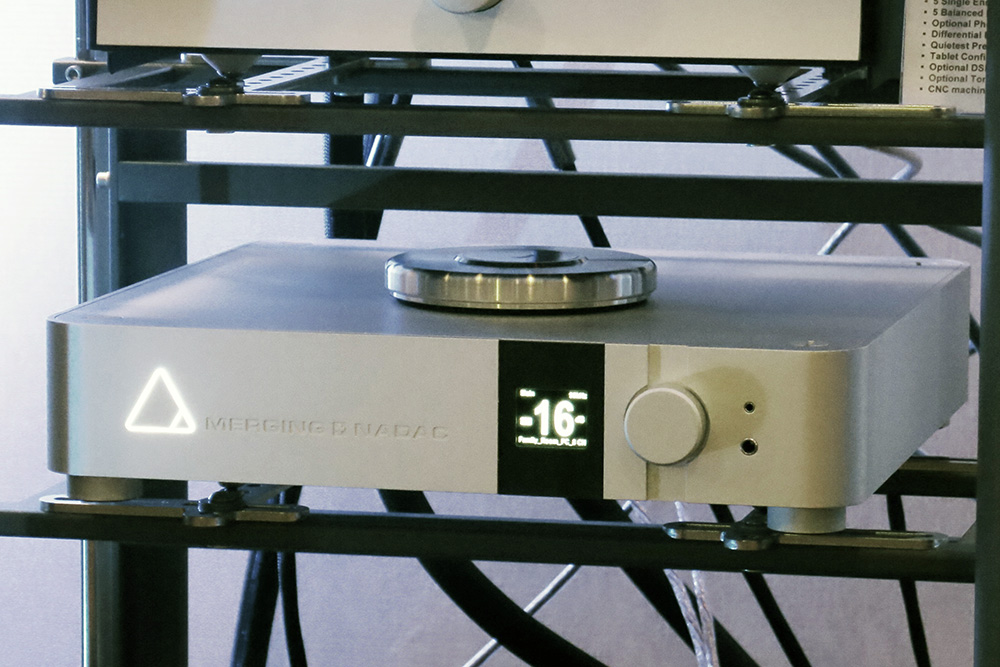 The only multichannel demo I heard at RMAF was from one of the most interesting multichannel products I've seen: the Merging Technologies NADAC, an eight-channel DAC that retails for $11,500 ($10,500 for the stereo version). Through an Ethernet connection, Merging Technologies' own Emotion computer app controls the NADAC, and users can also control it through JRiver software or through a smartphone. The computer acts as the signal source through Ethernet; standard digital inputs allow two-channel sources; and the NADAC accepts PCM in resolutions up to 24/384 and DSD up to 256. The NADAC has individual controls for each channel as well as a global volume control, so it can be connected straight to an amplifier using its XLR or RCA outputs. It's a consumer version of a professional product; the software for the pro version includes EQ, subwoofer crossover, and other advanced functions, which the company is planning to work into the consumer version eventually.

Mytek's $1995 Brooklyn is an advanced DAC-preamp and adds a high-quality, balanced-output headphone amp -- and it's also compatible with Meridian's MQA technology, which folds high-resolution audio signals into the bandwidth of a standard 16/44.1 digital stream. The DAC-preamp section accepts DSD in rates up to 256 and PCM in resolutions up to 32/384. It offers all the usual digital inputs (including USB and AES/EBU), has XLR and RCA outputs, and even includes a phono stage. 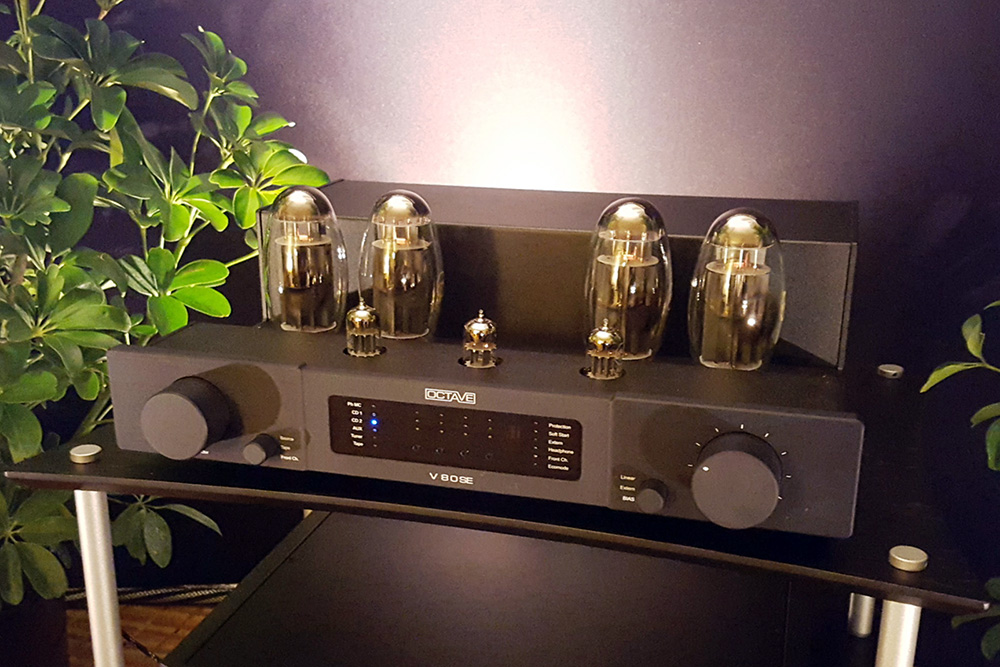 The $10,500 Octave V 80 SE brings some of the technical muscle of solid-state amps to tube technology. It has lots of power – 130Wpc into 8 ohms, provided by its quartet of KT150 output tubes. Mike Manousselis of Dynaudio (Octave's US distributor) told me the V 80 SE is stable into 2 ohms, and that its protection circuitry is robust enough that if you short its output terminals, the amp mutes rather than shutting off or tripping a fuse or breaker. 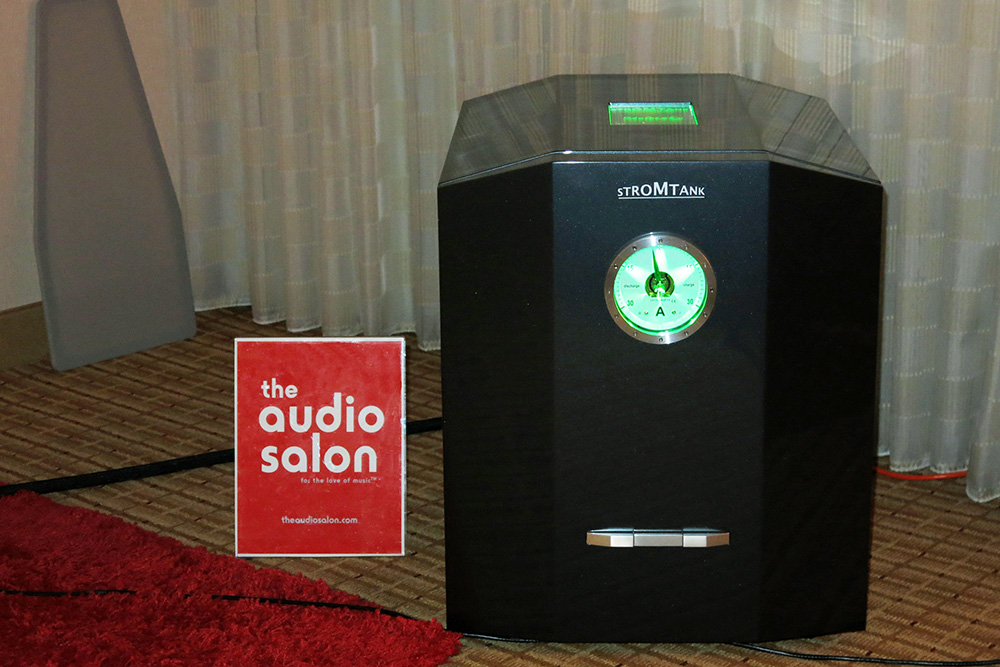 There are always lots of AC power-filtering products featured at RMAF, but the $29,900 Stromtank takes it to a new level. It's basically a rechargeable battery that powers your entire system. The DC from the batteries is converted to AC through a crystal-controlled oscillator that a company rep told me generates a stable voltage and frequency with a maximum output of 4000W. The Stromtank is completely disconnected from the AC line during normal operation. When the battery charge drops to ten percent, it switches over to AC power for your system while the battery recharges, although the battery is still in the system, kicking in to provide extra current when power demand rises above 600W. Battery life is rated at approximately 20 years under normal use, aided by a system that monitors the charge and temperature of each of the 60 internal batteries. 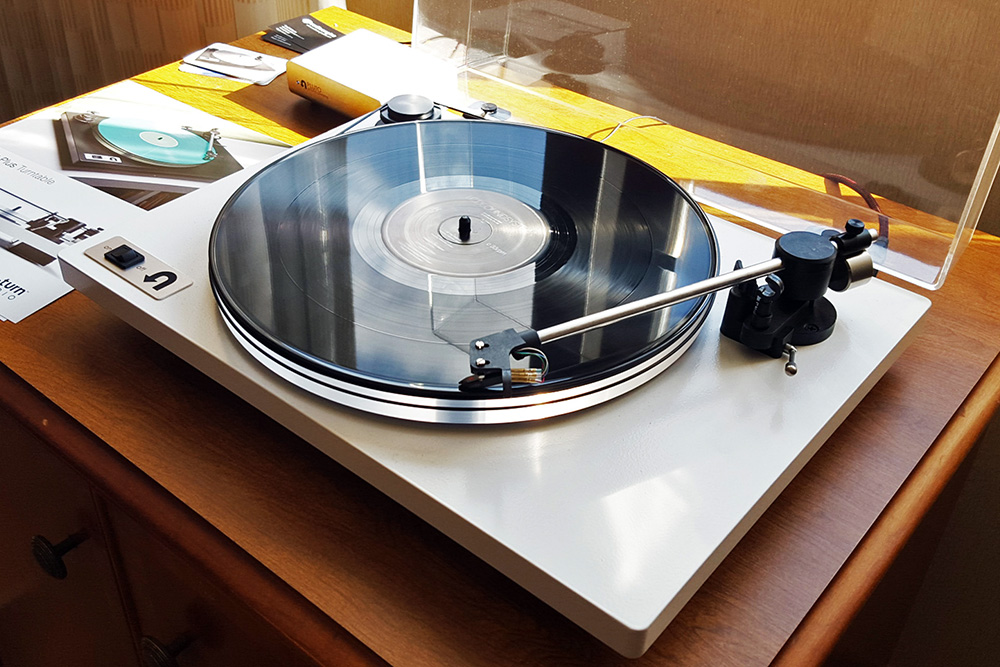 U-Turn Audio turned heads a couple of years ago with its stripped-down, budget-priced turntables. The Orbit Plus uses a modular approach to add new capabilities, including a built-in phono preamp. The sample seen here had the preamp, but U-Turn was demoing it with its external Pluto preamp, which a company rep told me has the same circuitry. The built-in preamp will add about $70 to the cost of the Orbit Plus. The base model of the turntable runs $179, but the price can go as high as $469 by adding options such as the preamp, an acrylic platter, and a tonearm lifter. 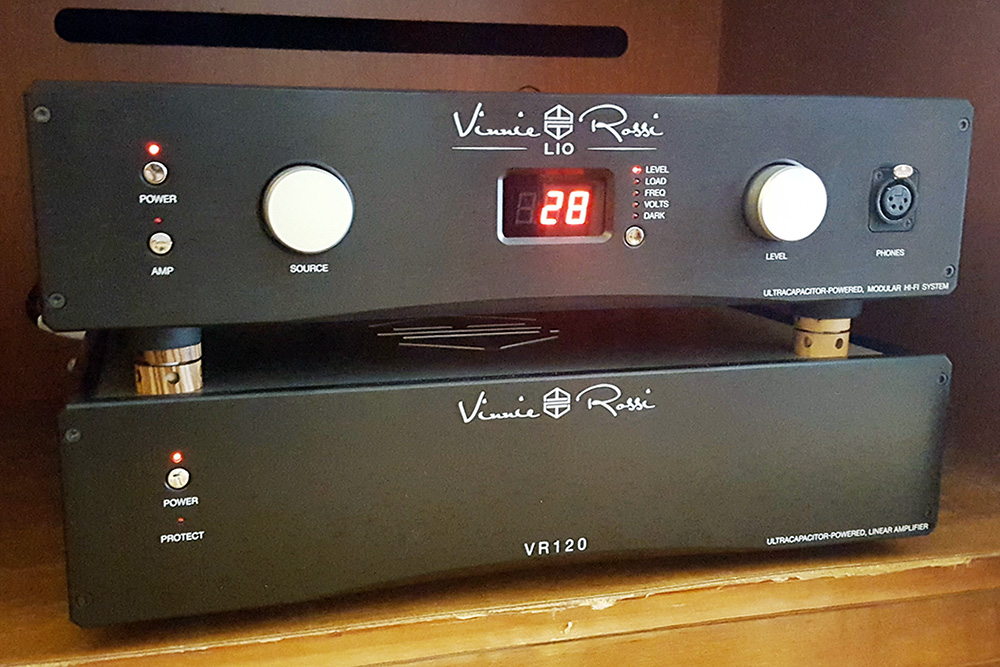 Vinnie Rossi has garnered lots of attention over the last year with his modular, supercapacitor-powered L10 preamp-phono stage-DAC-headphone amp. Now he's got a supercapacitor-powered amp to go with it. The $4995 VR120 (seen at the bottom of the stack in the photo) delivers 120Wpc into 8 ohms, and can be bridged to create a 250W monoblock. Powering the class-AB amp are two banks of supercapacitors, which work sort of like rechargeable batteries, except they charge a lot faster. One bank powers the amp while the other one charges. The bank powering the amp is completely disconnected from the AC line, so the amp is isolated from power-line noise. 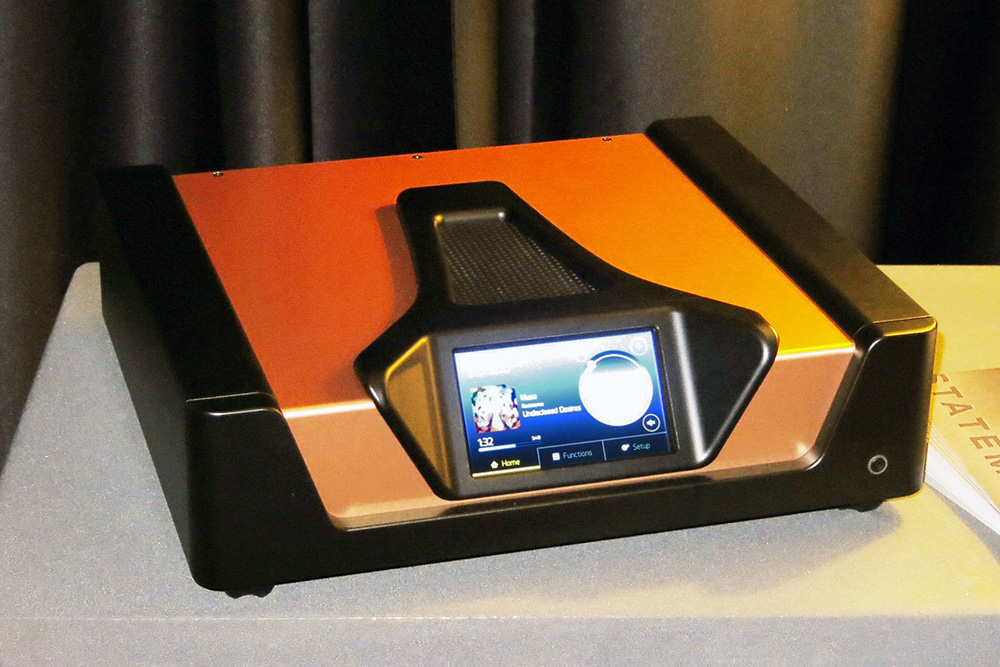 Continuing the trend toward high-end, high-tech electronics, Wyred 4 Sound showed a prototype of its Statement modular controller, a preamp-streamer-DAC that's compatible with Apple AirPlay and can stream from networked hard drives. It's a fully balanced design with built-in DAC and phono preamp modules that can be upgraded when new technologies arise. The input and output modules can also be changed out to suit changing technologies or user needs. The controller sits atop a matching 250Wpc amp. No price has been set, but availability is expected sometime this winter.