If there's a hot trend in audio electronics, it's headphone amps. Seems like every manufacturer has come out with one in the last year, and headphone jacks are suddenly appearing on practically every new preamp. It was easy to observe this trend at the 2014 Rocky Mountain Audio Fest in Denver -- both in the hotel rooms where manufacturers were doing demos, and in the CanJam section where headphones were on display.

I focused a lot more of my RMAF reporting on headphones, but I also saw several headphone amps I thought were worth reporting on -- especially new portables, which are in my opinion where the most interesting innovations are happening. You can also find more news about new headphone-friendly audio products in my report on new stereo audio electronics from RMAF. 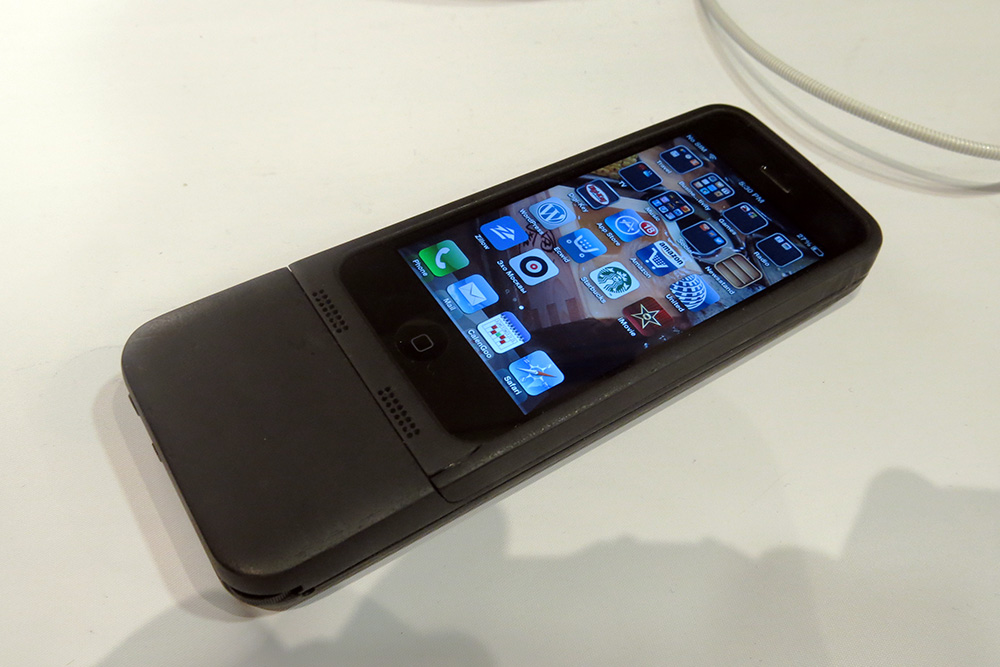 I find most amps designed to attach to smartphones rather cumbersome, but the CEntrance i5 reaches a new high in sleekness for the category. It's basically a longer case for an iPhone 5 that includes a DAC, an amp, and a backup battery. Versions for the two variants of the iPhone 6 are in the works. The i5 is available now for $300 through an Indiegogo campaign; after that it will retail for $600. 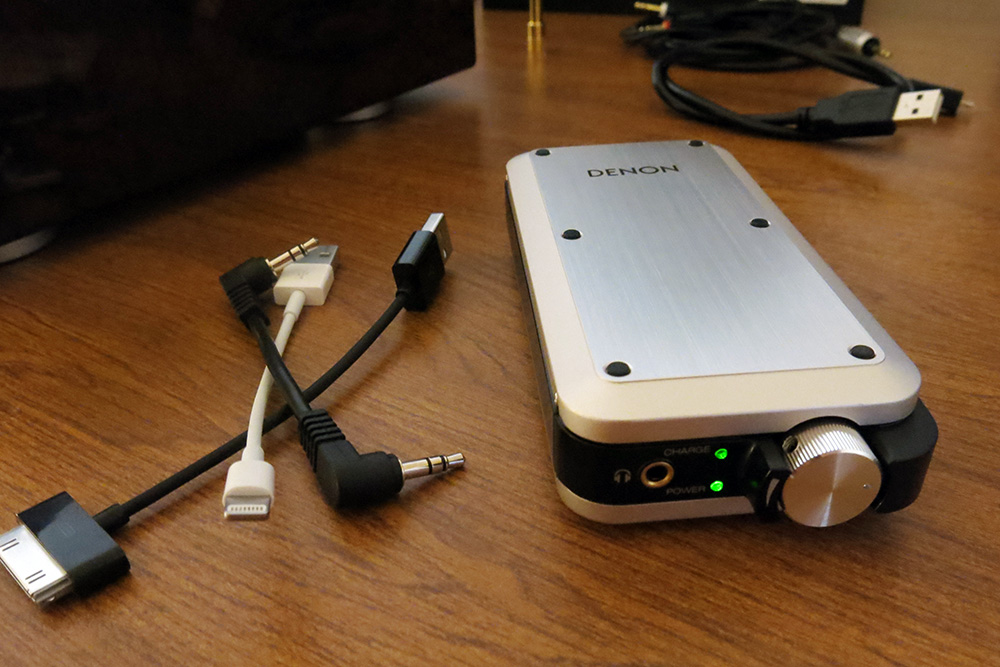 Denon's DA-10 is a sleeker, low-priced alternative to Sony's excellent PHA-2 portable headphone amp/DAC. It's powered by a rechargeable battery rated for 10 hours' running time. Inputs include USB and a 3.5mm analog jack, and the unit accepts PCM signals in resolutions up to 24/192 and DSD signals up to 5.6MHz. The USB jack will also take direct digital signals from iOS devices such as iPads and iPhones. Price hasn't been set, but it'll probably be around $349, quite a bit less than the Sony's $599 list price. 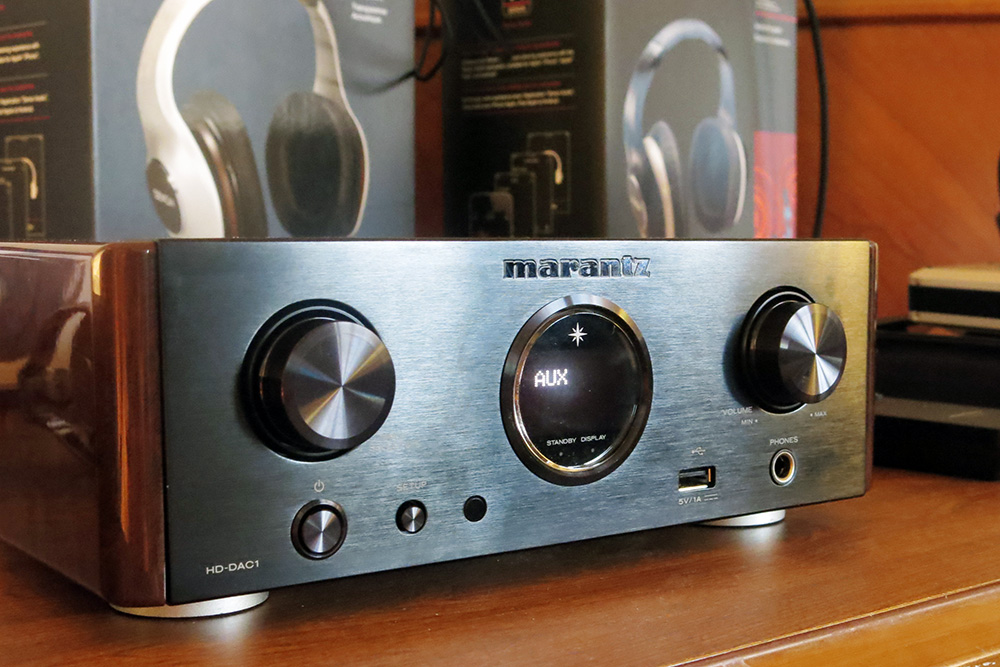 Like a lot of new headphone amps designed for home use, Marantz's $799 HD-DAC1 combines a digital stereo preamp with a headphone amp. The HD-DAC1 accepts PCM signals up to 24/192 and DSD signals up to 5.6Mhz. Inputs include USB, coax, and TosLink, plus a front USB input that's iOS-compatible, so you can get a direct digital signal from an iPhone or iPad. Unusually, it has an old-school, motorized, analog volume control, as well as a full-function remote control. 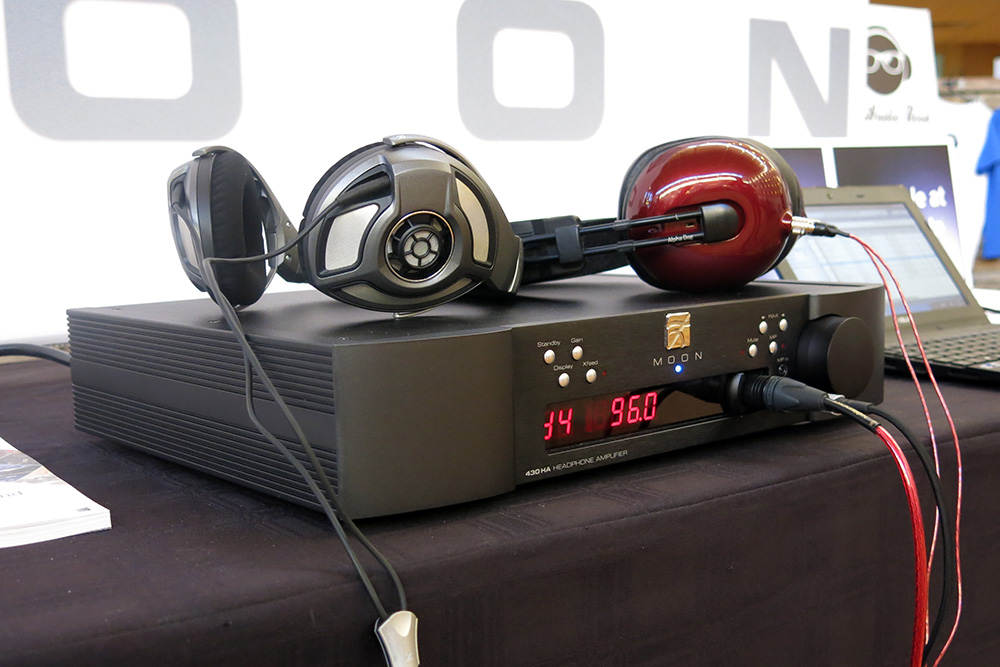 For those who own hard-to-drive headphones such as the HiFiMan HE-6, or who simply demand colossal amounts of power on tap at all times, Simaudio created the Moon Neo 430HA. It's rated at 8W at 50 ohms, way more than enough to power any headphones available (and probably any headphones ever conceived), considering that almost all headphones will give you at least 90dB SPL from a 1mW signal. The base model at $3500 includes XLR and RCA analog inputs. Another $800 gets you the DAC module, which handles PCM signals up to 32/384 resolution plus DSD, with USB, coax, and TosLink inputs. Four-stage DC regulation should keep the noise floor down to extremely low levels; rated signal-to-noise ratio is -120dB. 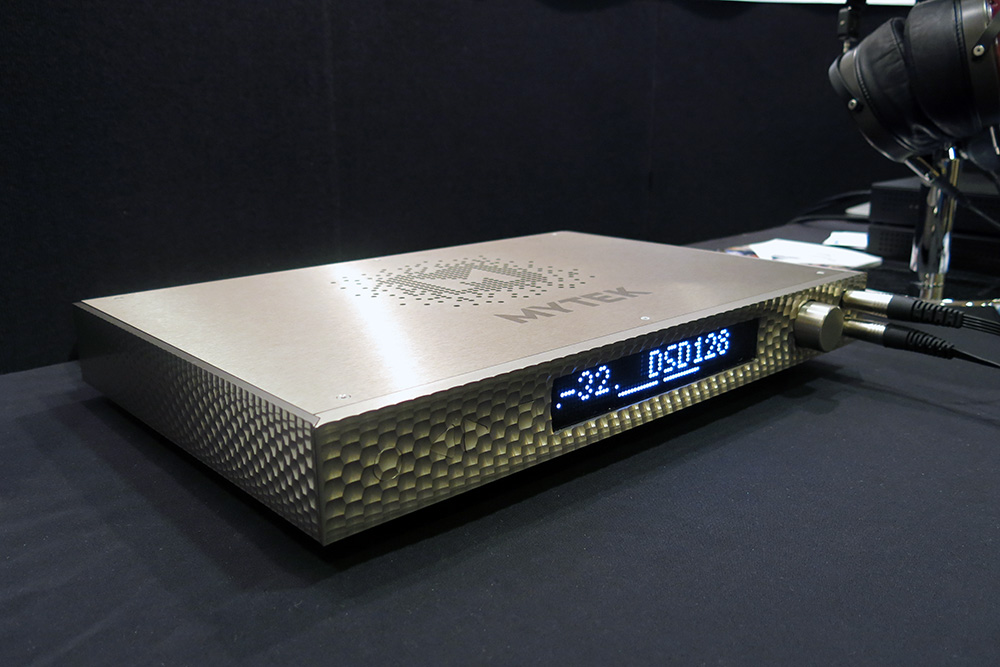 Mytek easily walked away with my award for "coolest metalwork at 2014 RMAF." Look closely at the front panel of the $4995 Mytek Manhattan, on the left side of the display, and you can see that the control buttons are designed to match the CNC-machined face. This headphone amp-DAC-preamp accepts PCM digital signals up to 32/384, and DSD signals as well. It incorporates a dual-mono headphone amp said to have "zero impedance" (which actually means near-zero impedance, like most solid-state power amps have). There are separate power supplies for the analog and digital circuits. XLR and RCA analog inputs are included, and an MM/MC phono stage is optional. 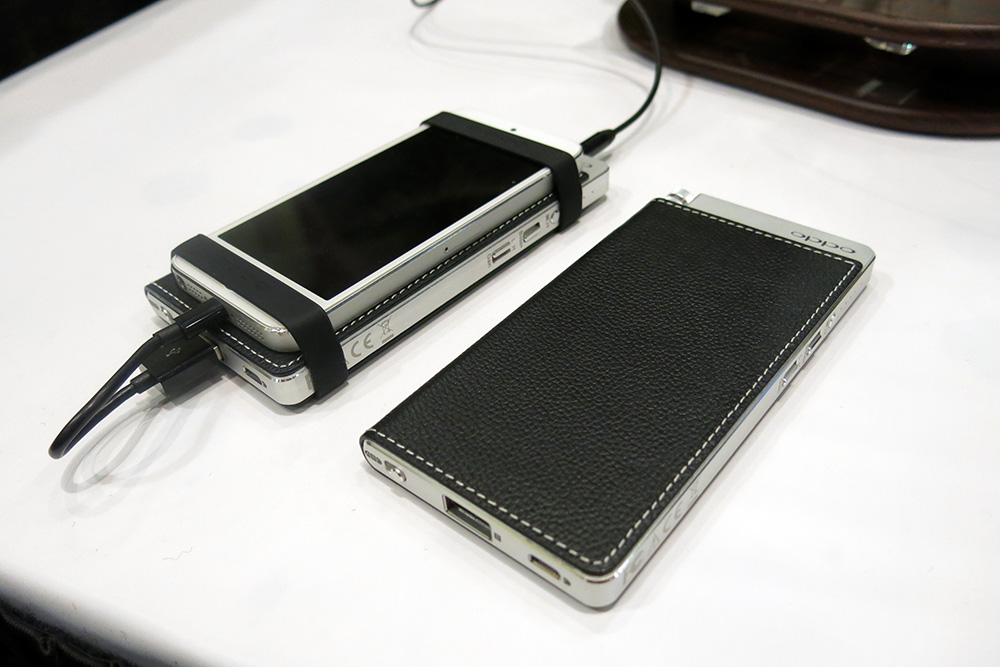 Audio-loving executives like you and me demand great sound when we're on the go, but we don't want bulky headphone amps creating bulges in our briefcases. That's why Oppo Digital debuted the HA-Z, perhaps the sleekest portable headphone amp I've seen. It looks almost like a large, leather-covered lighter, but it incorporates an ESS Sabre DAC that accepts PCM (to 32/384 resolution) or DSD signals, and it takes analog input, too. Oppo's Jason Liao told me the product needs one or two more design revisions before it's sold, and that he expects it to cost between $250 and $500. 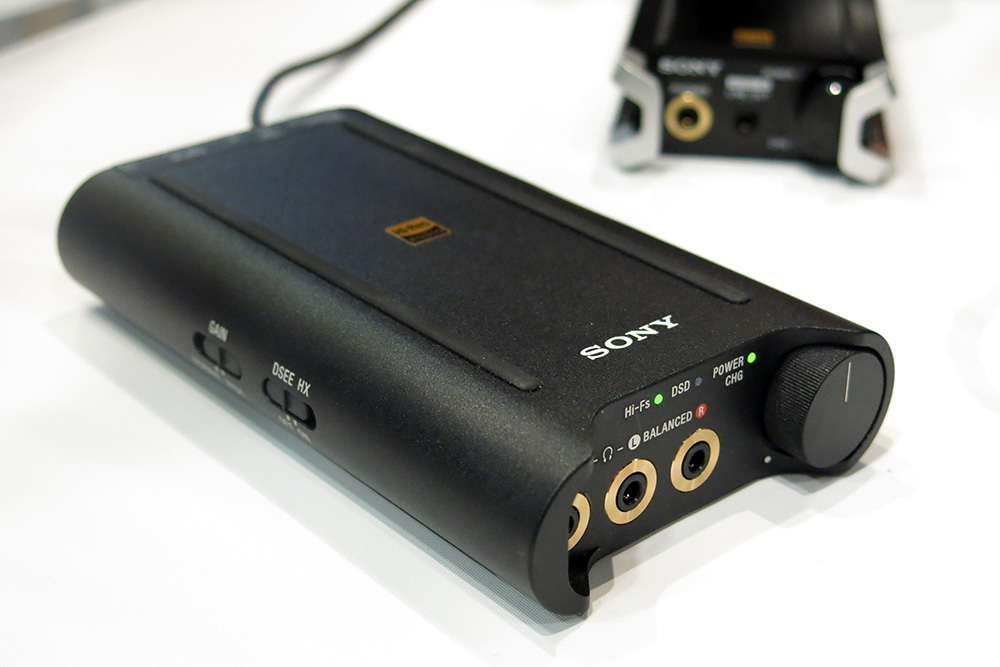 The $999 PHA-3 is a bigger, badder version of Sony's popular PHA-2 portable headphone amp-DAC (seen blurred out in the background). The PHA-3 adds balanced audio outputs, with completely separate grounds for the left- and right-channel output jacks. (It works with conventional unbalanced headphones, too.) It also adds a TosLink digital input, so you can use it as a DAC for your CD transport, and a larger rechargeable battery brings it up to 20 hours rated play time. It takes PCM in resolution up to 32/384, and DSD up to 5.6MHz. 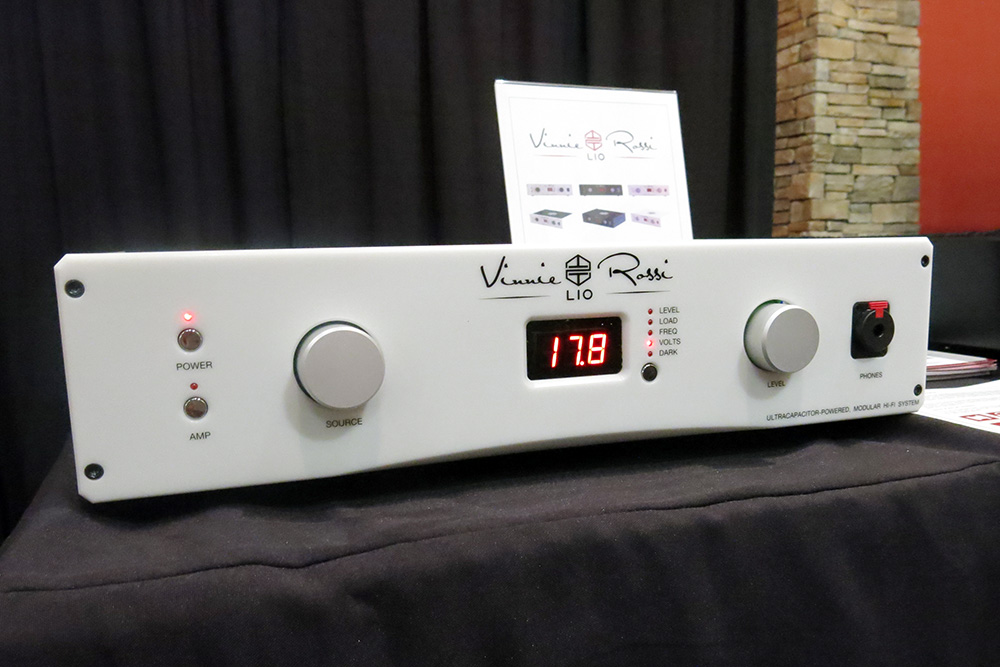 Some relatively exotic home audio preamps are battery-powered, but the new LIO -- the first product that Red Wine Audio owner Vinnie Rossi is selling under his own name -- gets its power from ultracapacitors, which are very high-value capacitors based on different electrochemical principles than standard dielectric-based capacitors used in most power supplies. Thus, it's immune to fluctuations in the AC power supply. The LIO is a modular design with plug-in boards for analog input, digital input with PCM/DSD DAC, MM/MC phono input, headphone amp, and 45Wpc MOSFET power amp. The base unit costs $1995 and modules run $295 to $1395.