Rocky Mountain Audio Fest is actually a two-part show, sharing the Denver Tech Center Marriott with CanJam, an expo devoted entirely to headphones and related gear. CanJam is by far the best consumer show for headphones I've ever attended. Most of the major manufacturers show up. Well, at least the ones who focus on enthusiasts; you won't find Beats or Bose or Skullcandy.

There are also a lot of headphone-amp manufacturers, ranging from well-established companies such as HeadRoom to tiny firms seemingly founded just weeks prior to the show. The important thing, though, is that almost every pair of headphones in the place is available for you to listen to, with their material or yours. For an enthusiast, there's simply no better place to check out the latest cans.

Here are my favorites of the new headphones on display at RMAF/CanJam. I'd also like to mention the V-Moda M-100 High-Res headphones, a limited-edition version of the popular M-100 headphones featuring new drivers and a less bass-heavy balance. Unfortunately, the company wouldn't allow me to photograph them. 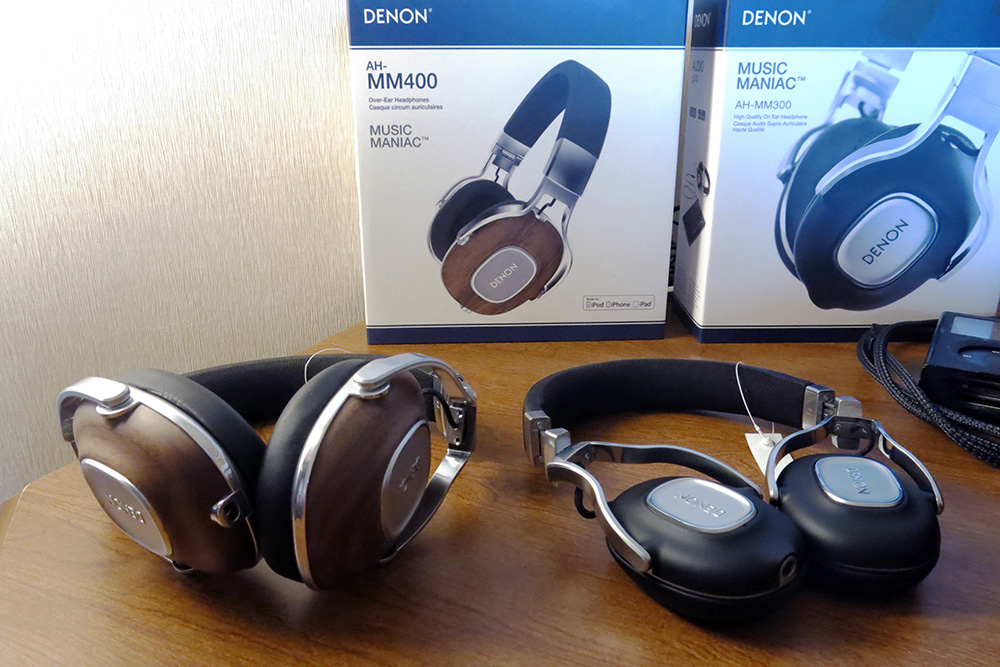 A couple of years ago, Denon revamped its line of headphones. The results were mixed, partly because some of the designs were rather weird and for the most part not very packable. The new $399 MM400 over-ear and $299 MM300 on-ear headphones shown here both fold easily for travel, and are said to have better passive noise isolation than their predecessors. And they look quite a bit less radical, too. There's also a smaller on-ear model, the $199 MM200, on the way. Unfortunately, these were just rough prototypes so I wasn't offered a chance to hear them. 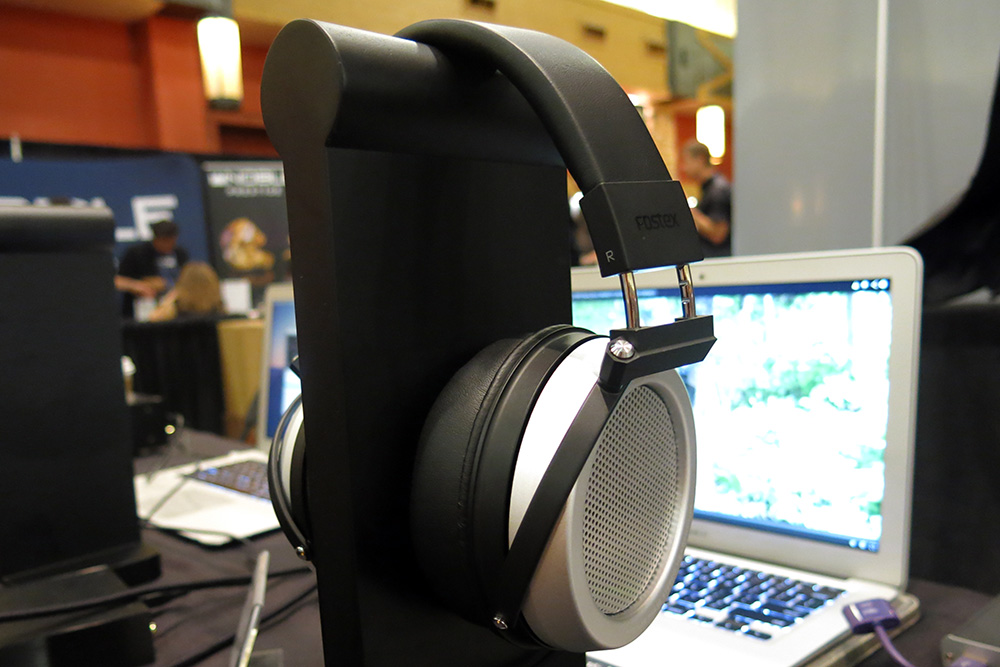 Observing that other companies (see MrSpeakers below) and enthusiasts were modding its T50RP professional studio headphones, Fostex decided to do a mod of its own. The $699 TH500RP headphones use the same planar-magnetic diaphragm as the T50RPs, but the rest of the driver is modified, and the T50RP headphones' plastic, semi-open-back housing is replaced with a metal, open-back housing. 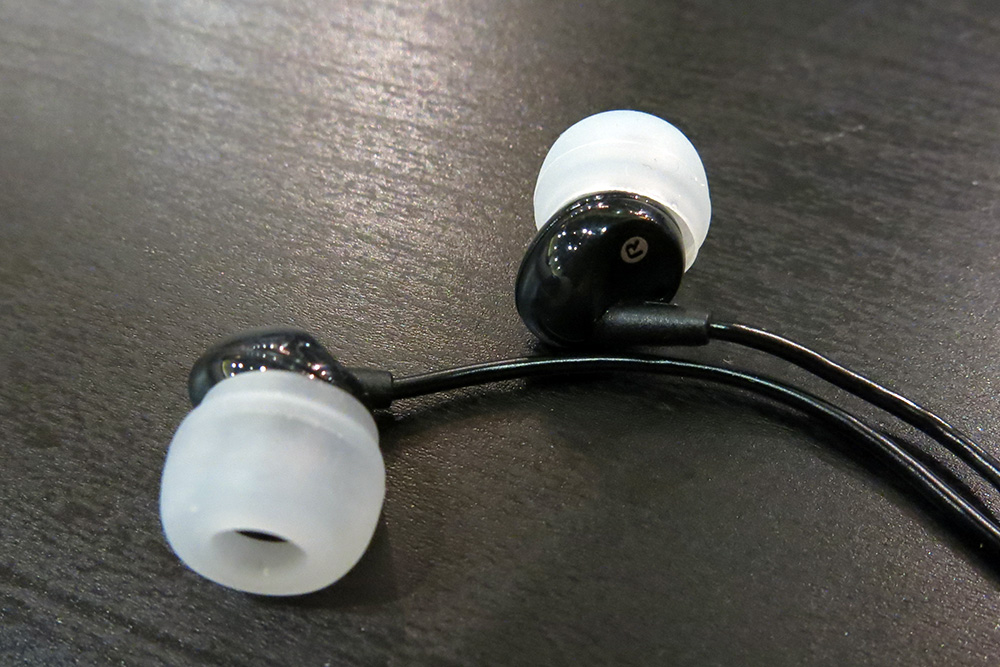 I've thoroughly enjoyed HiFiMan's planar-magnetic over-ear headphones, but its in-ear models have always sounded too bright for my taste. Not the new $49 RE-300 headphones, though. To my ears, the tonal balance sounded much more full, perhaps even very slightly bassy. The RE-300s are available in three versions: one with an iOS-compatible microphone/remote, one with an Android-compatible mic/remote, and one with crystalline copper cables and no mike. According to company founder Dr. Fang Bian, they'll come with five or six sets of silicone tips to ensure a better fit. 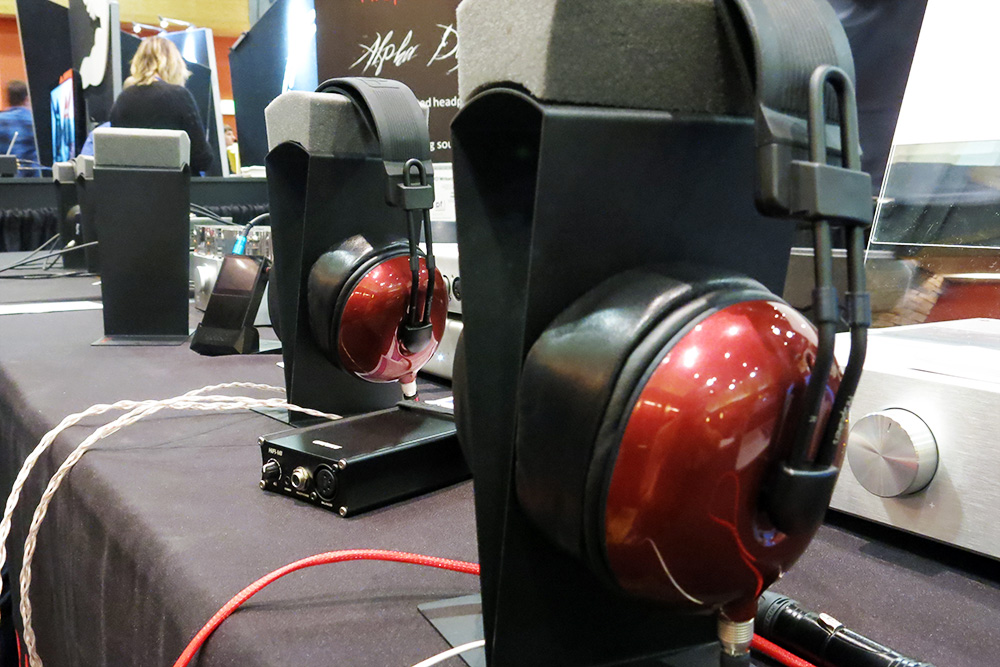 MrSpeakers is a San Diego-based company that modifies Fostex professional headphones by retuning them acoustically. Recently the company began making its own earpiece backs, and with the new $999 Alpha Prime headphones, it's now modifying the Fostex planar-magnetic drivers. According to company prez Dan Clark, the result is a significant reduction in distortion, extended high-frequency response, and a much bigger soundstage. I have to say, the soundstage the Alpha Primes gave me was truly incredible -- it's among the most realistic and dramatic I've ever experienced with headphones. 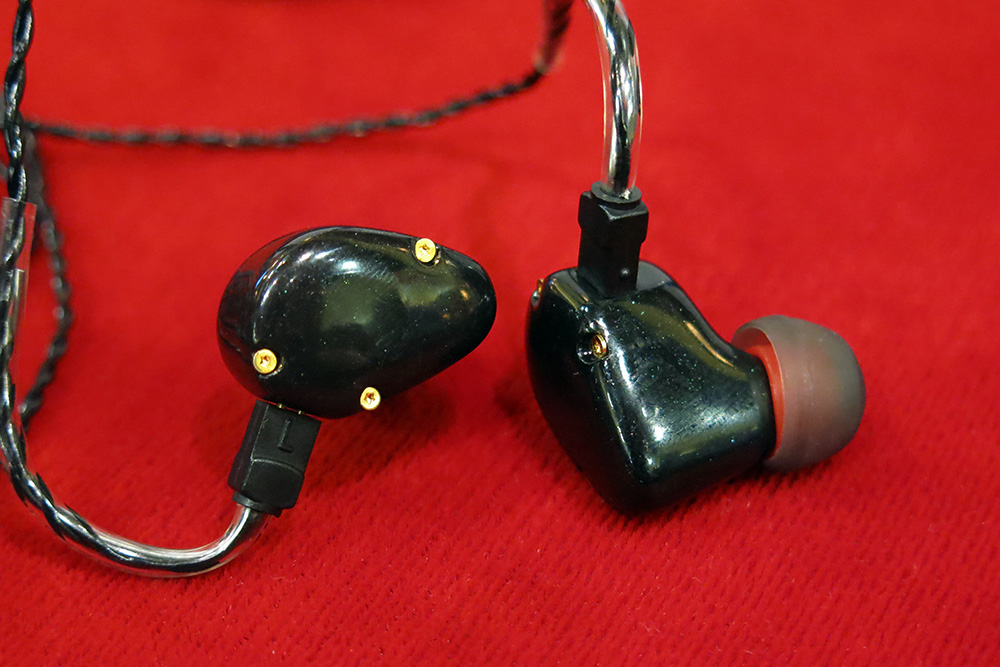 High-end in-ear headphone manufacturer Noble Audio had two interesting announcements at CanJam. First was that its custom-molded Kaiser 10 earphones -- which incorporate an incredible 10 balanced-armature drivers into each earpiece -- are now available in a universal-fit version for those who prefer the convenience of using silicone tips. The Kaiser 10 earphones cost $1599 in either version. The company also showed its Prestige line of custom in-ears, which are machined rather than molded. This process allows them to be created from all sorts of different materials, including wood, aluminum, carbon glass, and resin-cast honeycomb. The result is the most visually stunning earphones I've ever seen. 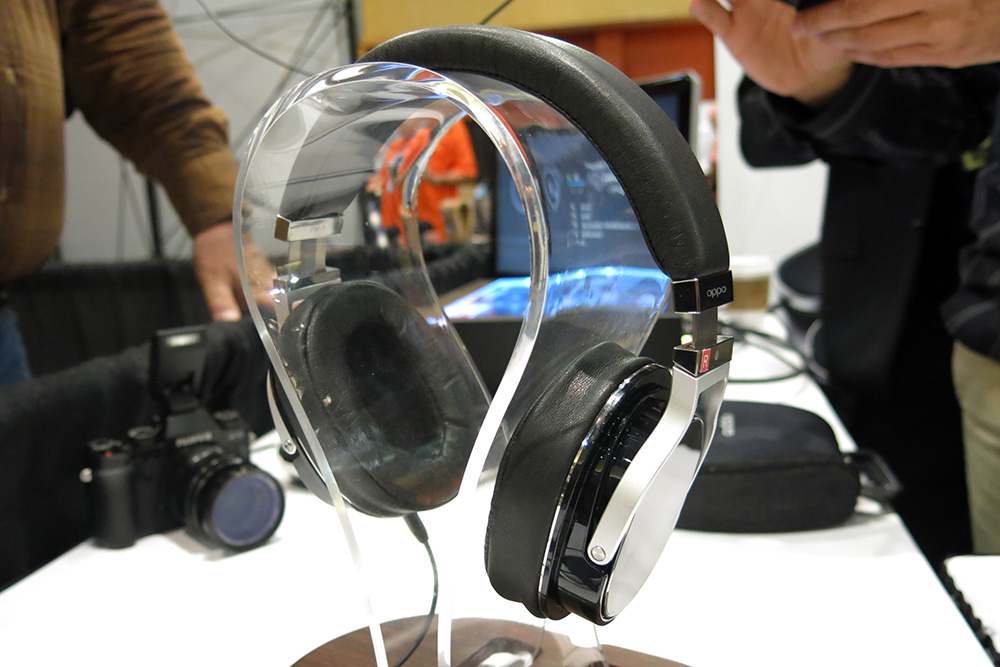 Oppo Digital calls the PM-3 the "first truly portable planar-magnetic closed-back headphone." The new model weighs only 300 grams, versus 395 grams for the not-at-all-heavy-in-the-first-place PM-1. The PM-3 is a closed-back design, so the isolation should be adequate for loud environments, especially because the generously sized earpads allowed even my large earlobes to fit completely inside. I found the sound extremely well controlled and clear -- livelier, too, than the slightly dark sound of the PM-1. The company expects the PM-3 to be available in January, at a price "lower than the PM-2" (which costs $699). 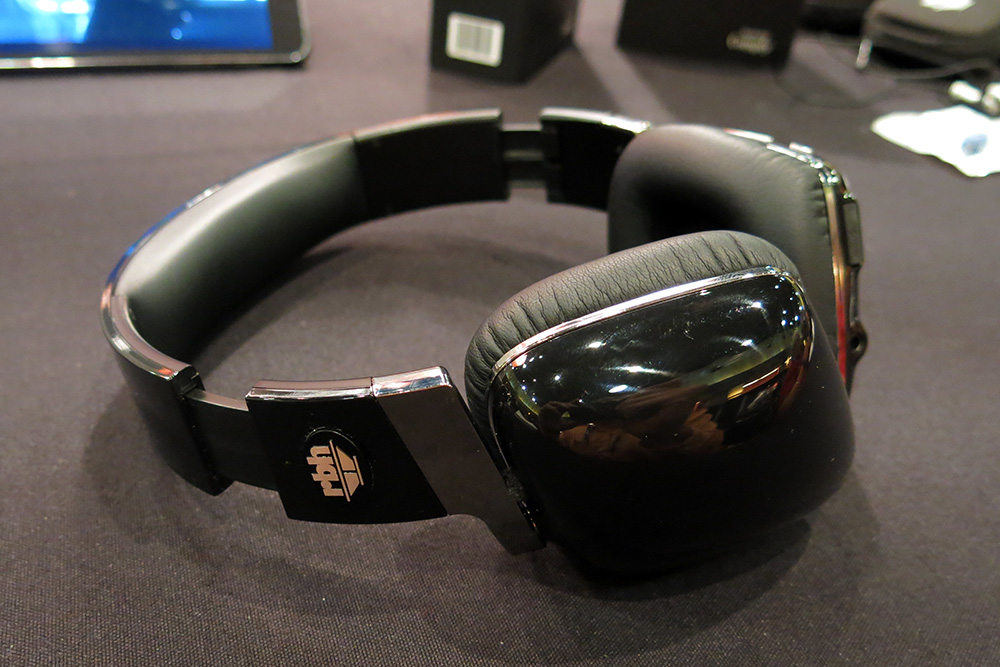 RBH surprised everyone with the success of the excellent EP1 earphones. At CanJam, the company debuted a new compact Bluetooth in-ear model, the $179 EP-SB. I was more interested, though, in a prototype of the company's first full headphones, which can be run cabled or using Bluetooth. The headphones are sort of in between over-ear and on-ear, but I found them surprisingly light and comfortable. More important, though, is that even though RBH's Daren Egan told me the company has a lot more tuning to do before releasing them, I thought they already sounded more neutral and natural than most of the wireless headphones I've tried. No price or release date yet, but Egan told me RBH is "thinking under $250." 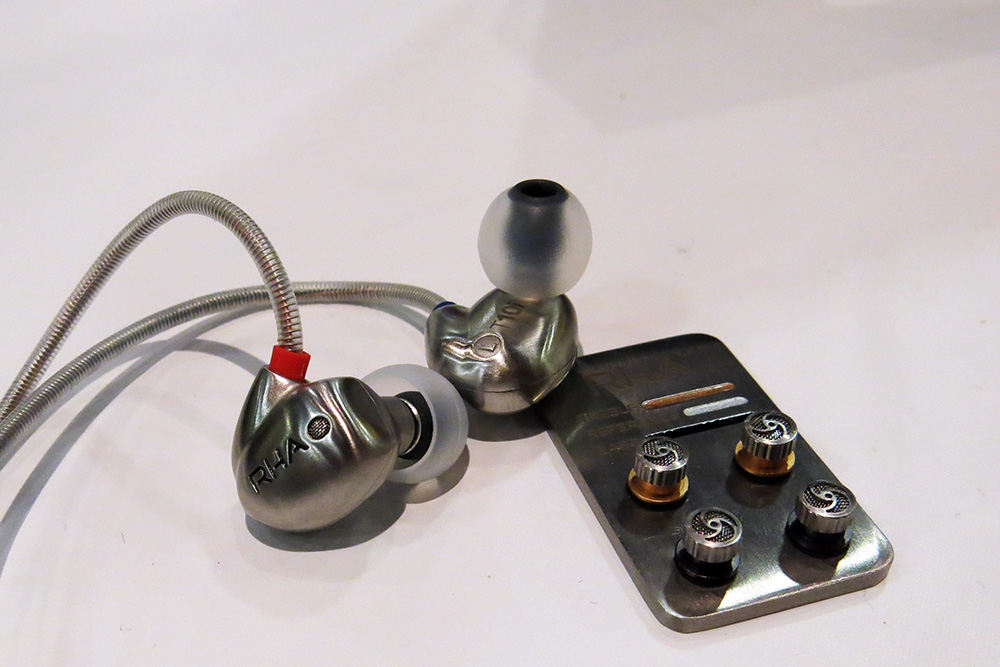 The $199 T10i is the most interesting creation yet from up-and-coming UK headphone specialists RHA. It includes three different tone filters, which can be easily changed out because they simply thread into the earpieces. You get a reference (neutral) filter, and filters for bass boost and treble boost. The filters' effects are subtle and useful; I found the reference filter best for most material, but the treble boost filter best for many tunes. According to RHA, the stainless-steel earpieces are made using a new injection-molding technique. 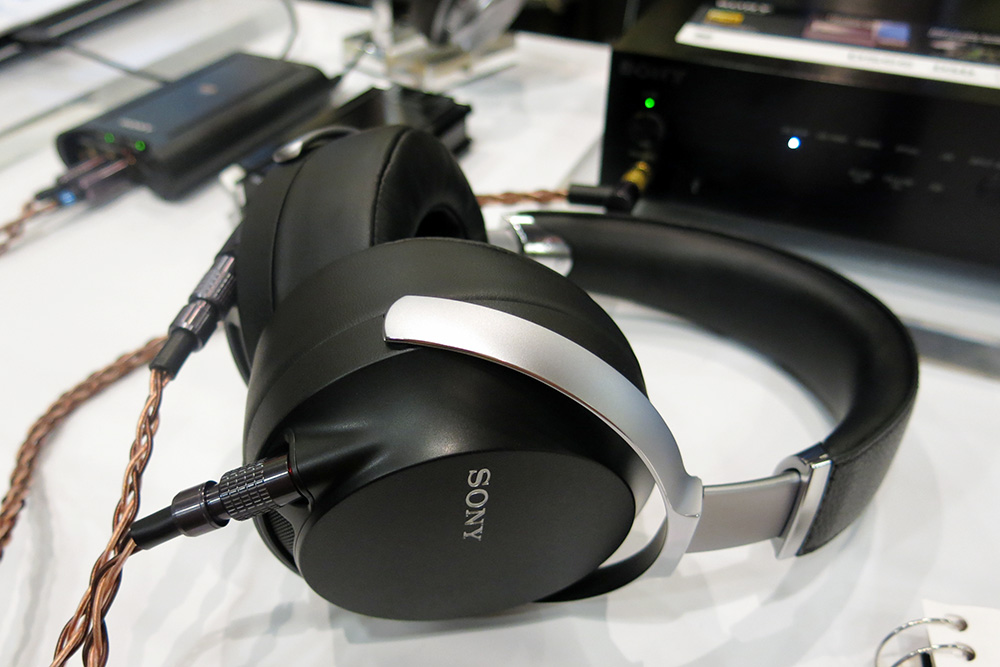 Sony's MDR-Z7 headphones debuted at the IFA show in Berlin last month, so CanJam was its first North American showing. The $699 model uses a big 70mm driver in a vented-back (not open-back) enclosure, and the rated frequency response is said to extend to 100kHz. Upgraded cables developed in conjunction with Kimber Kable are a $229 to $249 option. I'll be curious to get a longer listen; my brief audition indicated that the MDR-Z7 headphones are a little bassy, but the bass is very tight and well controlled. 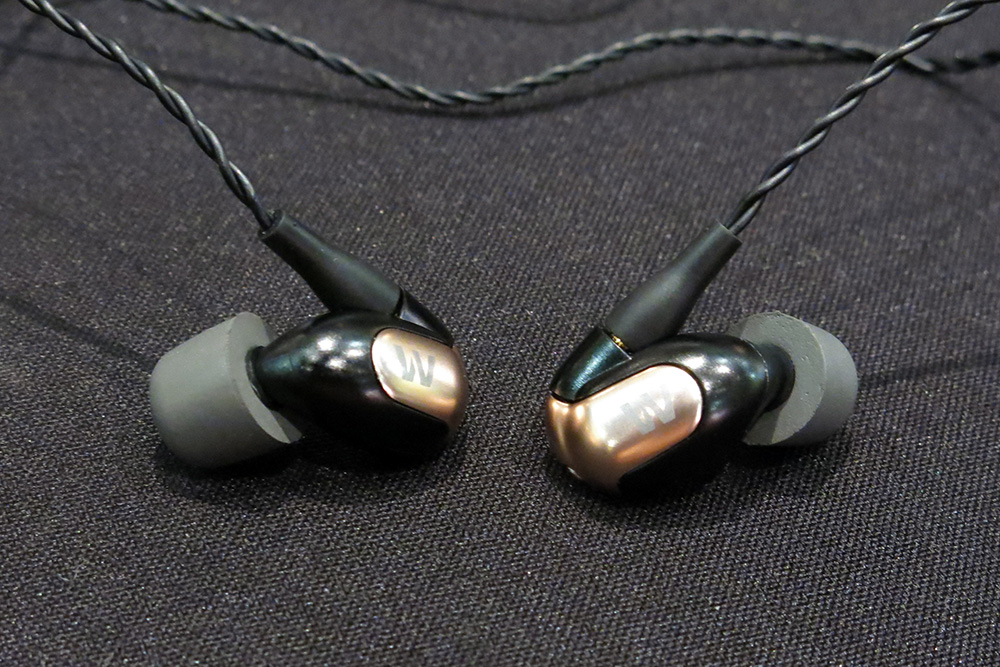 In-ear headphone specialist Westone demoed its new high-end, six-driver earphone model, the $999 W60. It's a three-way design using all balanced-armature drivers. I loved the sound, the fit, and the isolation. To me, the W60s sound very clean and flat and uncolored except for perhaps a slight (and to me, appealing) darkness in the upper treble.