Let’s talk Elac. Since famed loudspeaker designer Andrew Jones -- previously of KEF, TAD, and Pioneer -- joined the German firm a few years ago, the company’s been on a tear. Speaker line after speaker line have emerged from its labs, from the super-affordable Debut line to the upscale Uni-Fi and now the innovative Adante line. Not only that, Elac has begun dabbling in active loudspeakers, and it now offers a range of electronic components. The company also recently acquired United States-based Audio Alchemy, and has begun folding that company’s pint-sized electronics into its own catalog of SKUs. In an industry so often defined by its complacency and adherence to rigid paradigms, Elac seems to be looking and moving forward with serious alacrity. 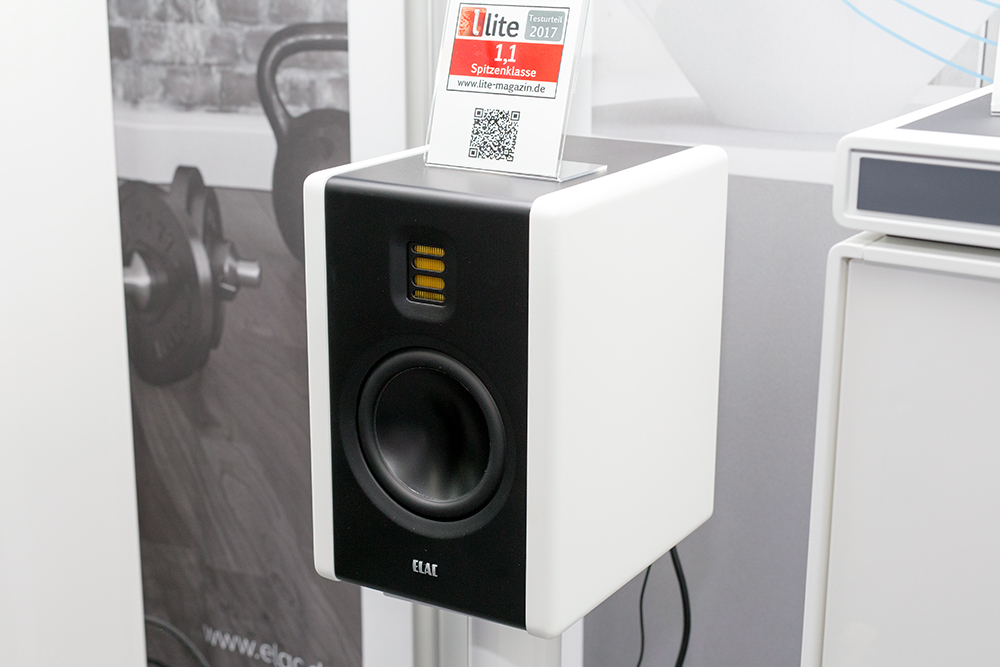 The AM 200 (AM stands for Aktiv Monitor) retails for €599/pr., and it pairs a Heil tweeter with a 6" midrange-woofer, all motivated by 80W of class-AB power per cabinet. While the AM 200 made its debut toward the end of 2016, this was our first opportunity to see it in person, and it definitely looks the business. The contrasting black-and-white satin finish, the recessed driver mounting, and the contoured cabinet combine in a compelling way. Considered in tandem with multiple inputs on both the analog and digital side, as well as bass extension down to a claimed 38Hz, €599 seems like a flaming bargain. 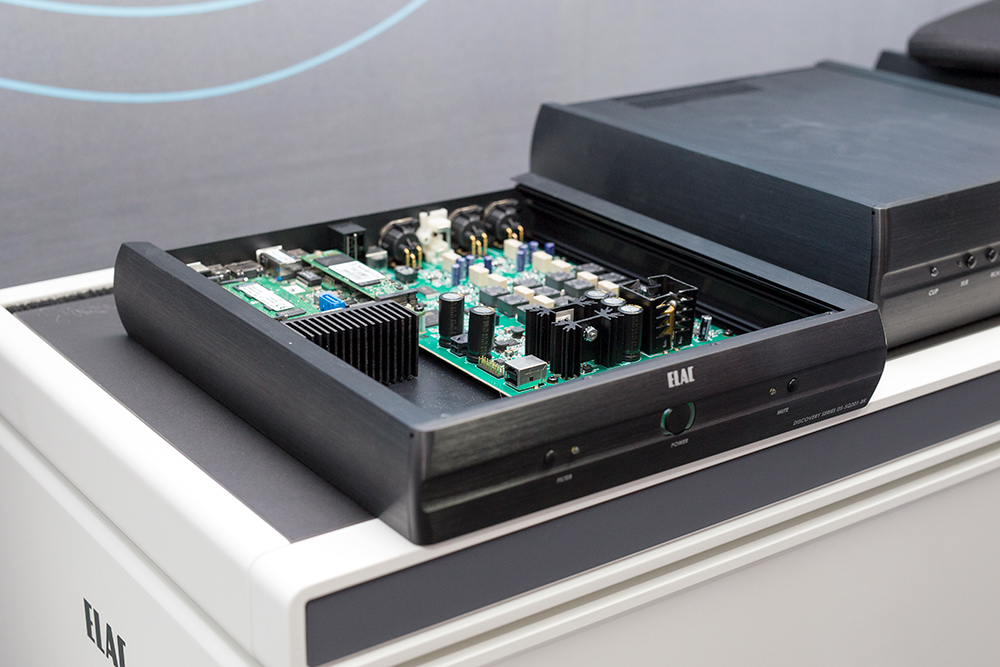 As far as new products go, Elac demoed its newest piece of electronics, the Discovery Q Roon music server. Price is TBD, but the Elac folks predict a retail price of approximately €2500, and buyers will get quite a lot for their money. Roon support is built in, and the unit comes with a one-year subscription. Every major file type is supported, and it accepts up to 32-bit/384kHz PCM, and up to DSD256. On the back of the chassis are balanced XLR and unbalanced RCA analog outputs, in addition to I2S, AES/EBU, optical, and coaxial digital outputs. The dual type-A USB ports can be used for both local content storage and asynchronous USB audio. Finally, Elac has included native Tidal and Internet Radio support. 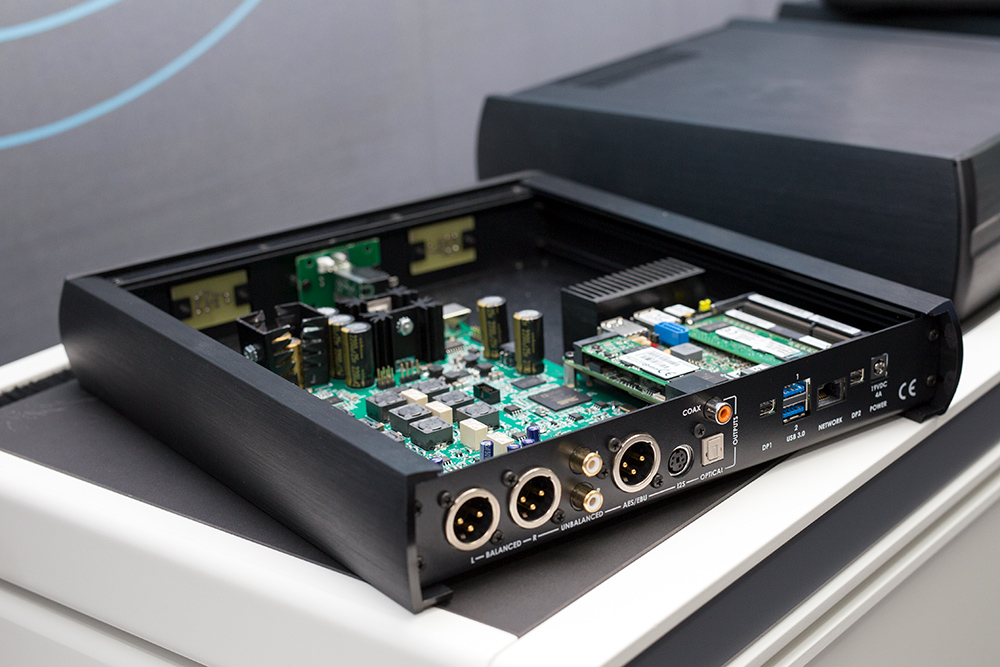 The company’s Adante speaker line also saw some attention, with the €2998/pr. AS-61 standmount that we covered in our CES coverage back in January being joined by the €1999 AC-61 center channel, €2400 ASW-121 subwoofer, and the €6000/pr. AF-61 floorstanding model. I’ll only touch on the AF-61, as that was the only model playing music, but it’s quite promising. The three-way tower features a concentrically mounted 1" soft-dome tweeter nestled in the middle of a 5.25" aluminum-cone midrange, partnered with what appeared to be three 8" aluminum woofers. In point of fact, the AF-61 uses what Elac calls an Interport Coupled Cavity arrangement, whereby the floorstander actually has three 6.5" woofers mounted internally in dedicated vented compartments, each of which is enclosed within another chamber, that in turn are linked to the three front-mounted 8" passive radiators. Sensitivity is listed at an average 87dB, with a nominal 6-ohm impedance and a frequency response of 39Hz-35kHz. The AF-61 isn’t exactly a looker of a loudspeaker -- I actually prefer the appearance of the far-less-expensive Uni-Fi UF5 Slim -- but it promised big performance, which I was far more interested in. 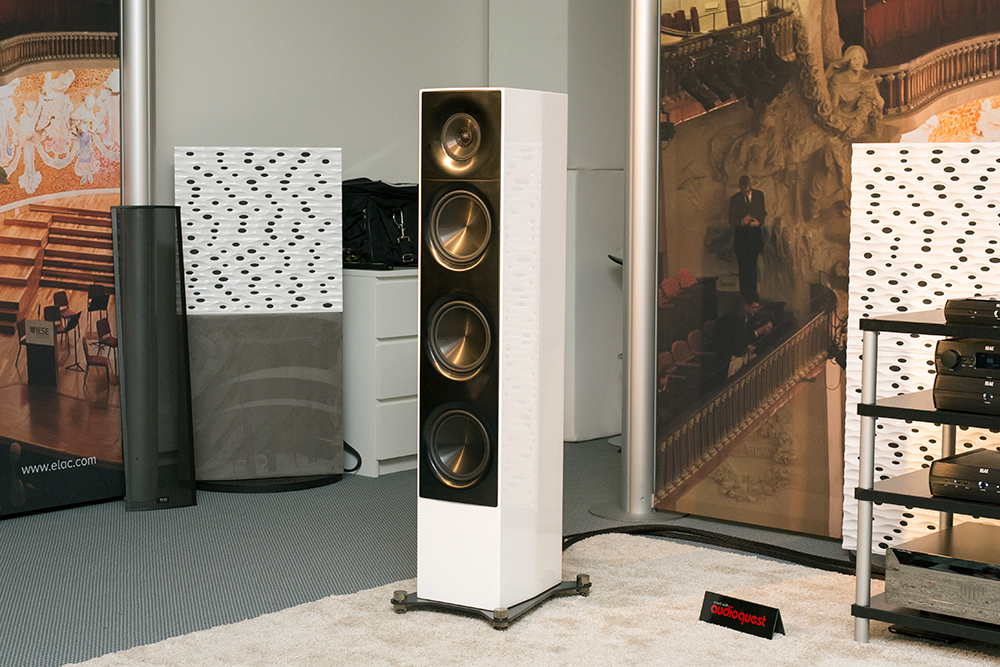 Andrew Jones was demoing the AF-61 and a rack full of Elac Element and Discovery electronics to a room full of eager listeners, playing a mix of classic tracks featuring both male and female vocals. What first struck me about the AF-61 was its midrange: it was smooth and a touch sweet, with loads of texture. Vocals of both sexes felt rounder, fuller, and more tactile than I’d heard with other high-quality loudspeakers that I experienced around the Munich Order Center. Soundstaging was strong from what I heard in the back of the room -- reviewers get no preferential treatment in that regard -- with the AF-61s throwing up expansive imaging and a surprising sensation of recording depth. That soft-dome tweeter seems to complement its partnering midrange unit, exhibiting silky-smooth transient detail and reasonable, if not linear, treble extension. The tower sounded a little polite to my ears, but as always, it’s dangerous to characterize the sound of any product when listening in an unfamiliar setting with someone else’s equipment and musical content. I fully intend to grab a pair of AF-61s when the Adante line enters production in the coming months. The proof’s in the long-term listening, but if I were a betting man, I’d wager Mr. Jones has come up with something special.