Pushing the Envelope: Loudspeakers from EgglestonWorks, Estelon, and Wilson Benesch

Every High End show seems to bring with it a raft of monstrous new loudspeakers from boutique brands with retail prices comfortably in six-figure territory. Most are tall, heavy, and a bit gaudy to behold, and they nearly always sport off-the-shelf drivers. There’s nothing inherently wrong with that. As one unnamed manufacturer mentioned to me today, “You could sell anything to somebody at this show.” I don’t doubt it. But I’d much, much prefer to dedicate my time to loudspeakers that aren’t just drivers in a big ol’ box. For less than €50,000/pair you could own any of the loudspeakers below and be secure in the knowledge that you couldn’t do much better -- if at all. 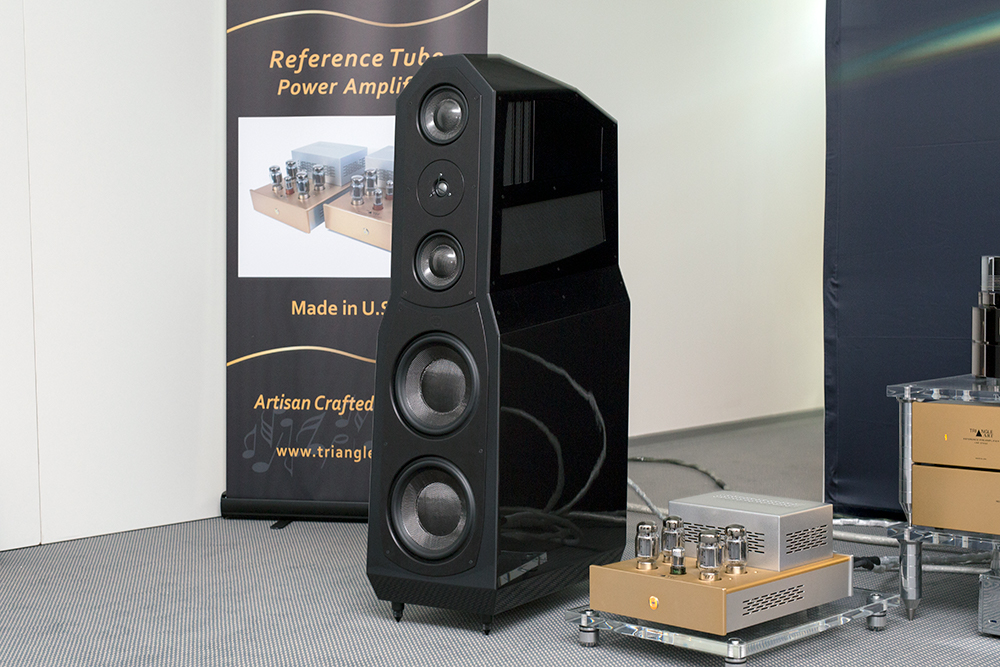 EgglestonWorks made its name back in 1997 with the Andra loudspeaker, a 210-pound beast chiseled from variegated granite and outfitted with the best drive units that Dynaudio and Morel sold at the time. Twenty years and several iterations of the Andra later, the Memphis, Tennessee-based company has debuted its Andra Viginti (Latin for “20”). Retailing for $39,900/pair, the limited-edition model will be limited to 250 pairs. It features a 1” beryllium-dome tweeter and a pair of 6” carbon-fiber midrange drivers in a D’Apollito array, as well as a pair of 10” carbon-fiber woofers. At 50” tall and 255 pounds per cabinet, the Viginti is hardly a shrinking violet, but ambitious audiophiles get a solid freaking loudspeaker for their hard-earned cash. The Andra Viginti certainly looks the part, with carbon-fiber side panels that complement the model’s carbon drivers and contrast with the brushed-aluminum skin. While it’s difficult to gauge a loudspeaker’s prowess under show conditions, the Eggies sounded powerful to say the least, due in no small part to its pair of 10” bass drivers. This reflects the 20Hz-40kHz “usable output” parameters quoted by Eggleston. Its 87dB efficiency and 4-ohm nominal impedance don’t make the Viginti the most sensitive full-range speaker around, but the company demoed the floorstanders with Triangle Art’s Reference vacuum tube monoblock amplifiers that produce 160Wpc, and the resultant sound was excellent.

I was also highly impressed by Estelon’s forward-thinking Lynx loudspeaker, which retails for €40,000/pair when outfitted with a beryllium tweeter, or €50,000/pair with the optional diamond tweeter. The Lynx has a pair of 5” midrange cones flanking whichever tweeter the customer opts for, and a 10” woofer that is partially shrouded by the Estonian speaker’s beautiful curved cabinet. The “module” containing the midrange and tweeter units is motorized to permit vertical adjustability for tailoring to an individual space, and it’s accessible remotely via Estelon’s mobile app, created especially for the Lynx. The top of this module also features a subtle ringed LED accent -- pretty. This Wireless Intelligent Speaker, as Estelon calls it, was three years in the making. It shows, too, as it’s fully active -- the Estelon folks were unclear on what kind of amplification is inside the Lynx’s 143-pound chassis, though it sounds like a PWM implementation -- and fully wireless, with built-in Roon support. More impressive is that the Estelon’s software and hardware are upgradeable. 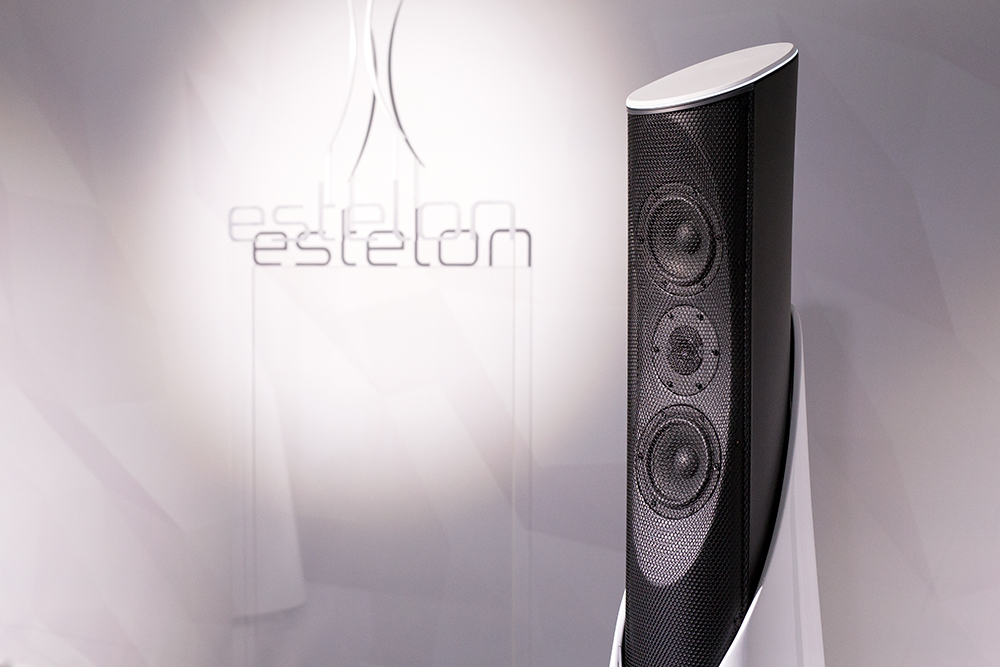 So how’d they sound? The Estelon contingent queued up modern composer Max Richter’s interpretation of Vivaldi’s Spring (from The Four Seasons) for the first selection, a cut that I’m intimately familiar with, and I heard a rich midrange, with the violin section sounding a touch fuller than I’m used to hearing. The Lynx’s treble performance was downright velvety in its presentation, lending the loudspeaker a sweet, pleasing overall sonic profile. I’m curious to see if the Estelon’s sound changes much between now and September, when it’s due to start shipping to dealers. If the Lynx’s performance ultimately matches its beautiful appearance and cool functionality, I suspect we’ll start to see other super-high-end manufacturers dipping their proverbial feet in the über-lifestyle loudspeaker segment. 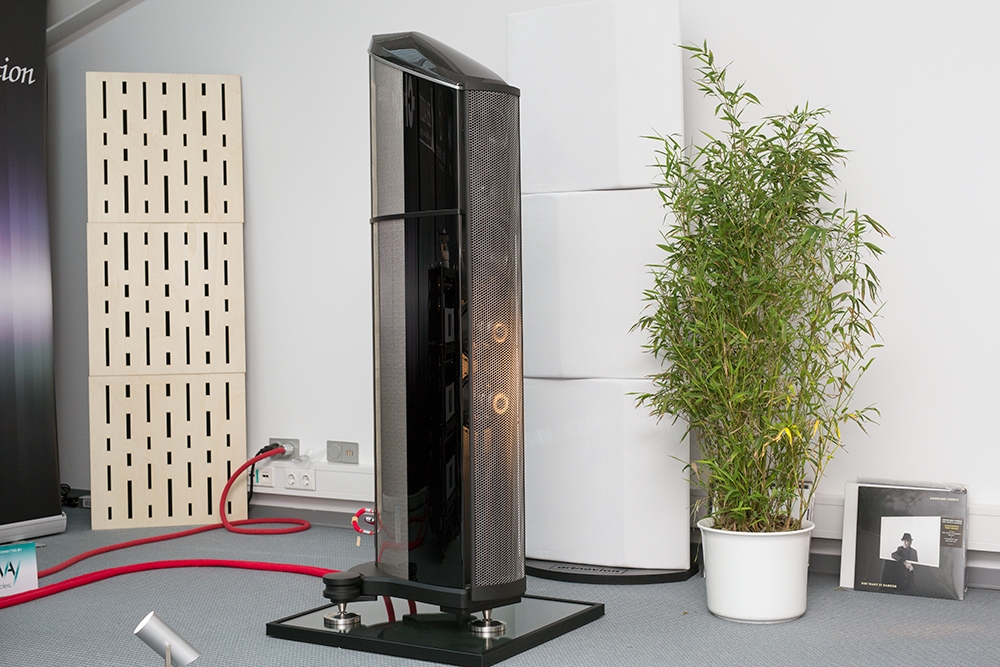 Last, but certainly not least, was Wilson Benesch’s wild-looking €44,590/pair Resolution, a new addition to the English brand’s Geometry series. It features a carbon-fiber cabinet complemented by an aluminum baffle. The Resolution is a 2.5-way design that has no less than seven drivers, including a silk-carbon hybrid dome tweeter and dual polypropylene midrange cones in an MTM setup (each of which uses a neodymium magnet), as well as four woofers arranged in Wilson Benesch’s signature isobaric configuration, whereby a pair of bass drivers are coupled and operate in parallel with one another to produce outsized bass performance when compared to a non-isobaric loudspeaker with the same internal volume. It must be acknowledged that the Resolution is a beautiful object, between its clever marriage of different high-performance materials, curved chassis, and unusual front-mounted driver complement, to say nothing of its overall fit and finish, which was outstanding. This is not to say that the Wilson Benesch was just a pretty face -- there are real, meaningful benefits to its unorthodox, and frankly rare, bass-driver arrangement, with the Resolutions pounding out plenty of tight low-frequency energy. Admittedly, it does not offer bass extension down to 20Hz -- Wilson Benesch lists the Resolution’s frequency response as 30Hz-30kHz -- something that I suspect the other two speakers mentioned here do. But that should not detract from the fact that the English company’s newest offering is inimitable. In this day and age, that’s an invaluable quality to have.