Based on my Florida Audio Expo 2019 experience, I originally thought we’d end up with two features on loudspeakers. After finishing walking the floors, I think we’ll get three or more features. There are far more products being shown at FAE 2020 than there were at FAE 2019, which is why I’m glad I’m not the only one here covering it. Below are more new and/or interesting loudspeakers I found, with all prices in US dollars. 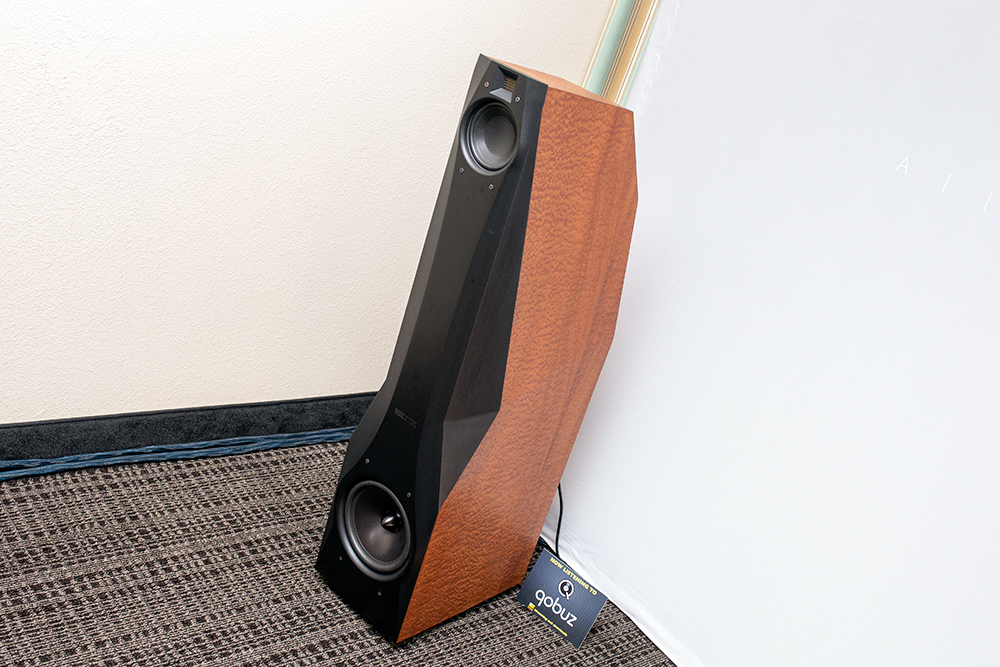 The Eikon Image1 active loudspeaker isn’t brand new -- it first debuted in the spring of 2018 -- but Florida Audio Expo 2020 was the first time I had the chance to take a good look and listen. It didn’t take long to figure out that there’s a lot to this very advanced loudspeaker design, which sells for $25,000/pair. That price includes the . . . 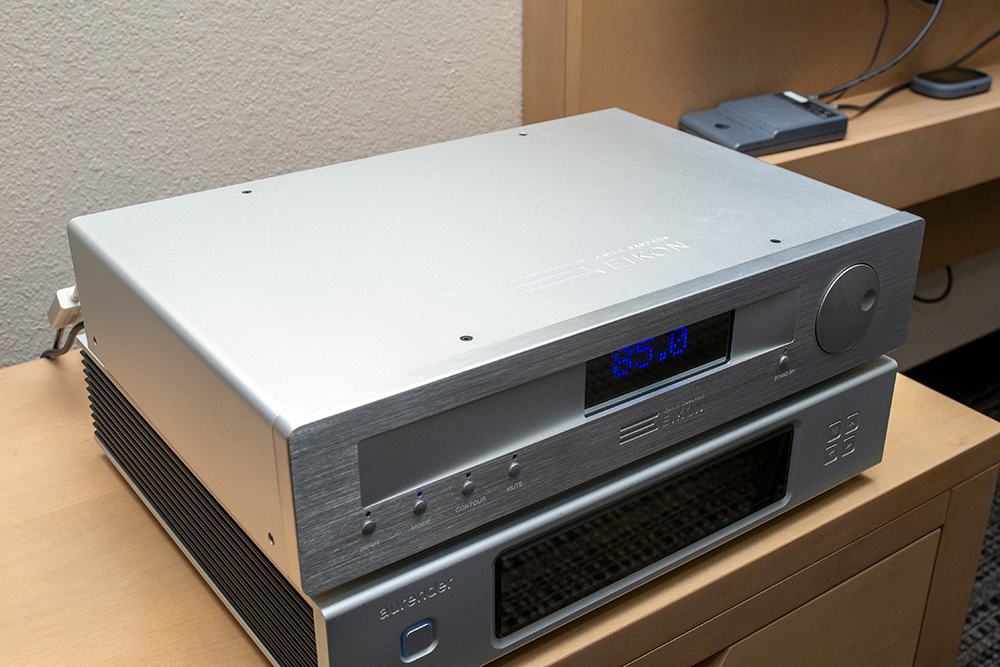 . . . Eikontrol, which not only acts as a preamplifier and digital-to-analog converter but also provides 56-bit-precision digital signal processing (DSP) for crossover manipulation and room correction. 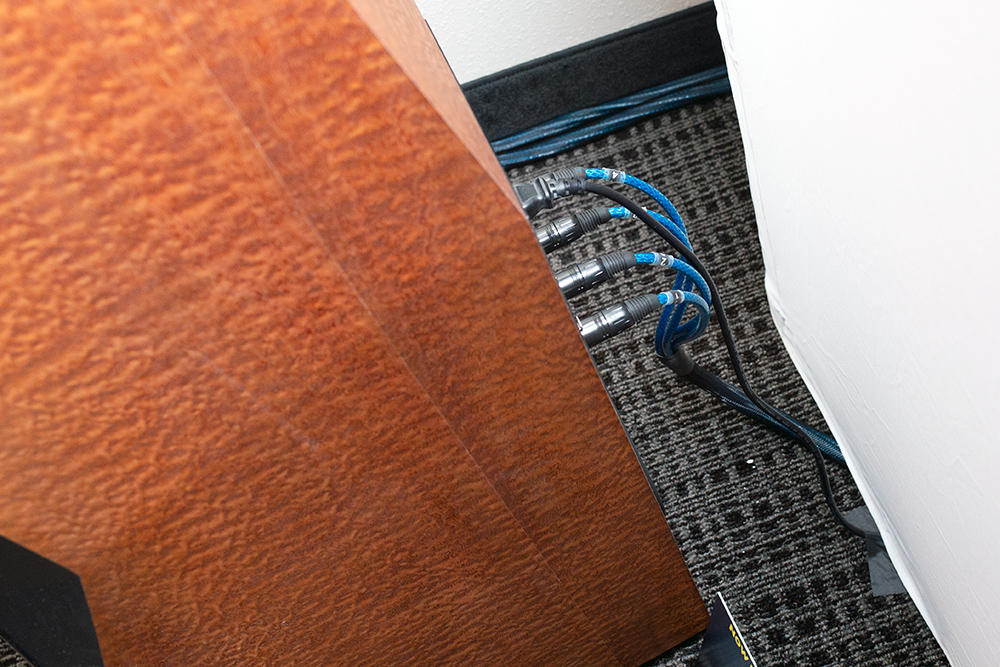 Since the Image1 is an active loudspeaker, it has a dedicated amplifier for each of its four drivers -- one air-motion-transformer tweeter, one 5" midrange driver, and two 8" woofers, one mounted on the lower part of the front and the other on the lower rear. The amplifiers are built into the speaker. Balanced analog interconnects connect the Eikontrol to the speakers (four runs per speaker, so eight in total). Because DSP is employed, they could go further than simply combining the outputs of the drivers for an ideal frequency response, which is what happens with most passive designs. In this system, they’ve also tailored the timing of each driver for ideal phase response and also adjusted the timing of the outputs of the woofers in relation to each other so that they generate a null to the sides of the cabinet, improving room interaction. I listened to a number of tracks they were playing in the room, and the overall clarity of the Image1s amazed me. I was especially set back by the very deep, detailed bass response. 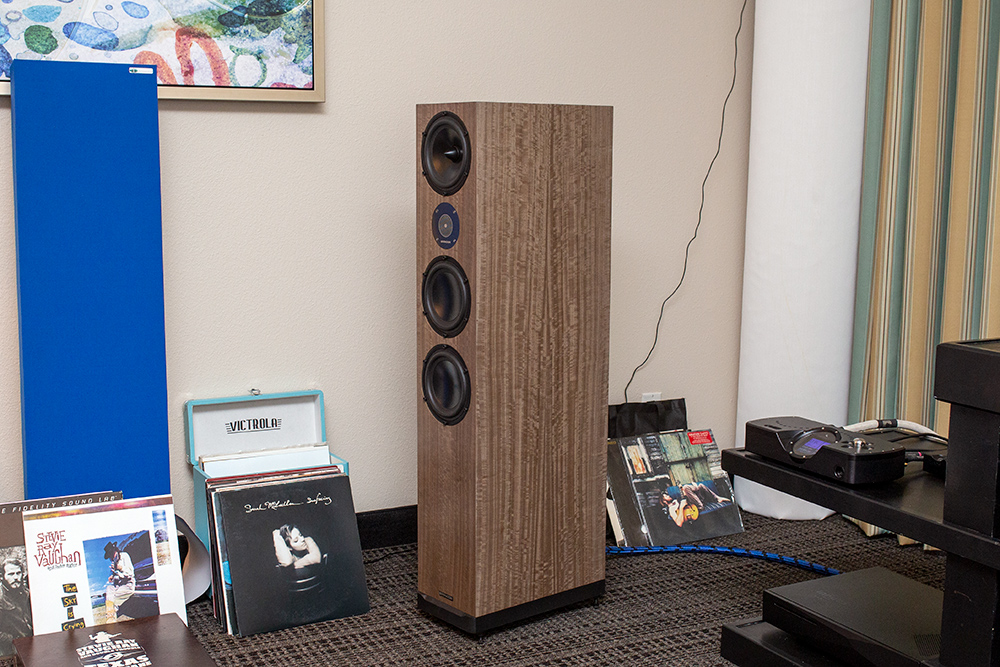 The Spendor Audio D9.2 loudspeaker (shown above) and its little brother, the D7.2, debuted last year, so neither is brand new. But the pair of D9.2s shown in Florida this year were noteworthy in that they were wrapped in a brand new finish: Eucalyptus Special Edition. While the standard D9.2 is priced at $11,495/pair, the Eucalyptus Special Edition version -- which is otherwise the same sonically as the standard D9.2 -- is $13,495/pair. We were impressed with the look of . . . 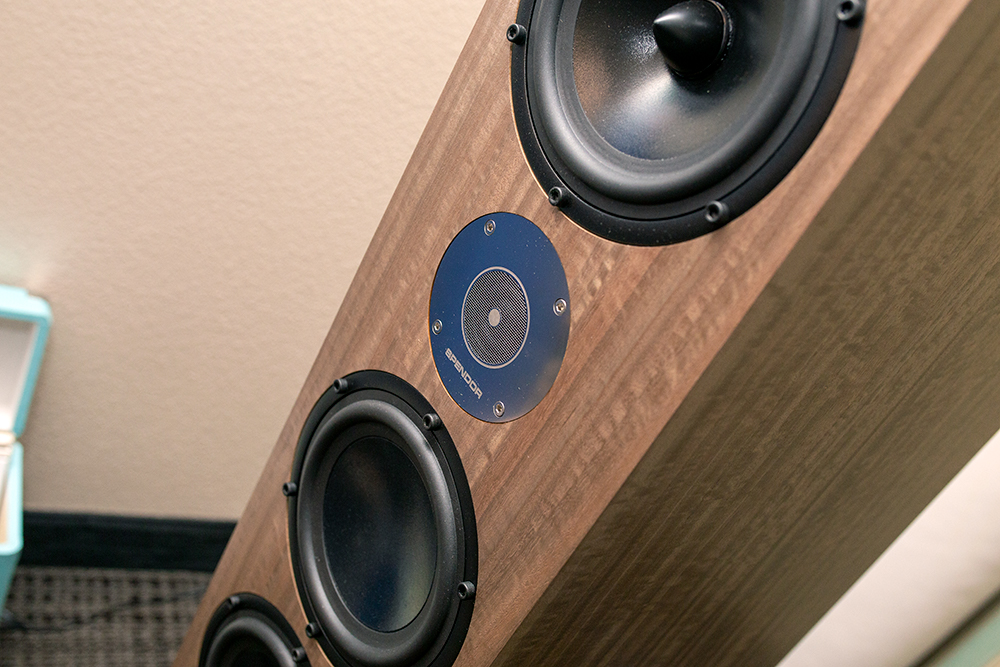 . . . the washed-out gray veneer of the Eucalyptus Special Edition, which we thought Chip and Joanna Gaines would also be mightily impressed with. 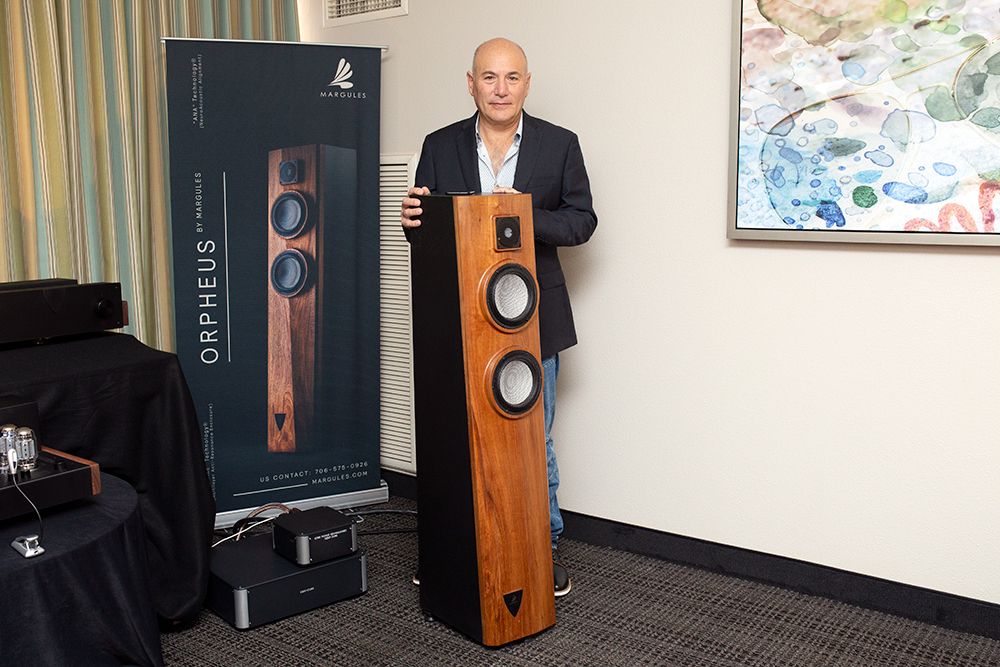 I’ve known Julian Margules (shown above), whose company Margules obviously bears his name, for about 20 years -- from back when the high-end-audio exhibits of the Las Vegas CES were held at the Alexis Park Resort. So not only was it a pleasure to see him again in Florida, but I was particularly pleased to see that he’s still doing well, because his room was chock full of his company’s gear and the sound was exceptional. Of all the components there, I was most taken with the unconventional-looking Orpheus 1.3 loudspeakers. 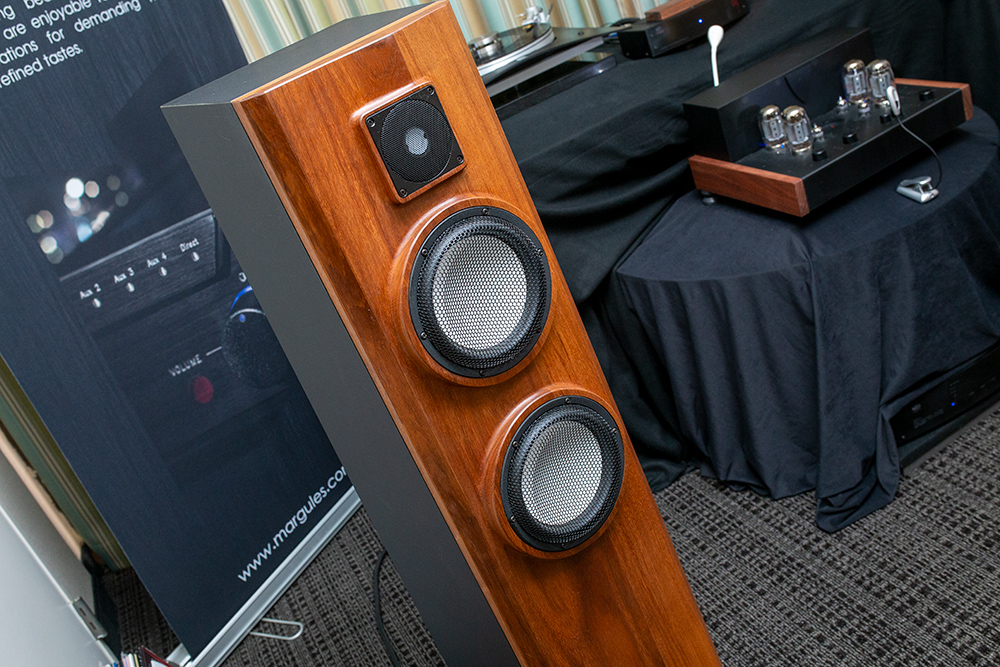 Priced at $20,000/pair, the Orpheus 1.3 is a 2.5-way design with three aluminum-ceramic drivers from Accuton -- a 1" tweeter and two 7" woofers (all diameter dimensions are guesses because the specification sheet didn’t have them listed). The tweeter crosses over to the topmost woofer at 2kHz. Both woofers operate in the bass region, but the bottom one cuts out at 600Hz. All the crossover slopes are 6dB/octave (first order), for optimum phase response. The cabinet measures 48"H x 10.2"W x 13.8"D and is made of HDF. The front baffle angles back a little to acoustically align the drivers, which Margules told me helped to give the speaker a really natural sound. He’s right -- the speaker does have a natural sound, and Joanne Hogg’s rendition of Leonard Cohen’s “Hallelujah” sounded nothing short of spectacular. It was one of the highlights of FAE 2020 so far. 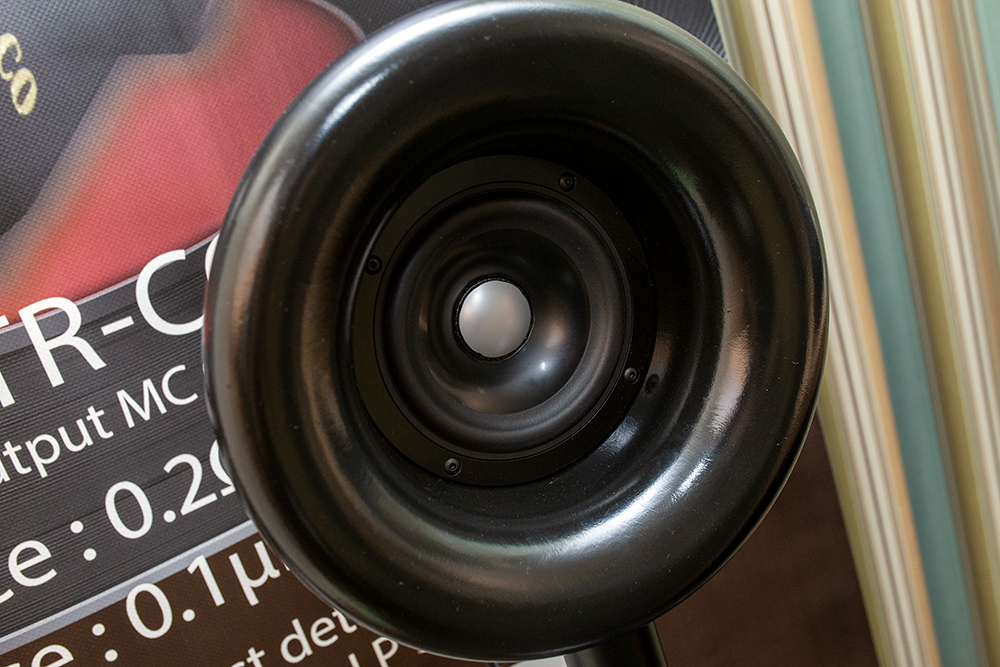 This comment is going to piss off a number of audiophiles, but I think it has to be said in order to give this next speaker its due: single-driver loudspeakers almost always sound like crap. Before Florida Audio Expo 2020, the only ones I found remotely listenable came from Cube Audio, a company based in Poland. Every other single-driver speaker I’ve listened to has had no real highs and definitely no lows, creating the tonal balance of an AM radio. Whatever someone thinks is gained by having a single driver try to reproduce the entire frequency range is offset by the simple fact that it usually can’t -- or at least can’t do it well. 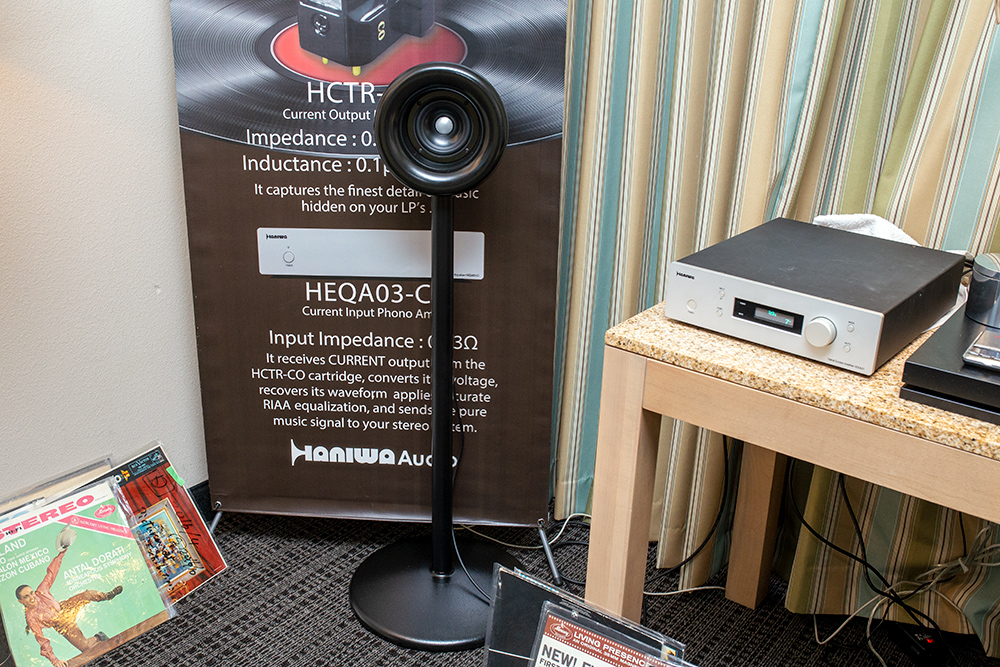 That’s why my eyes opened wide when I listened to the stand-mounted HSP01 single-driver speakers, which come from Haniwa, which is based in Japan. I wouldn’t say they sounded truly great, but they sounded pretty darn good, with a really rich and detailed midrange, decently extended highs, and shockingly deep lows for a 3.5" driver, even if it is nestled into a sort of horn (that horn also, quite cleverly, acts as the driver’s enclosure). I also heard a certain “rightness” to the sound when vocals were played -- they sounded cohesive and exceedingly natural. 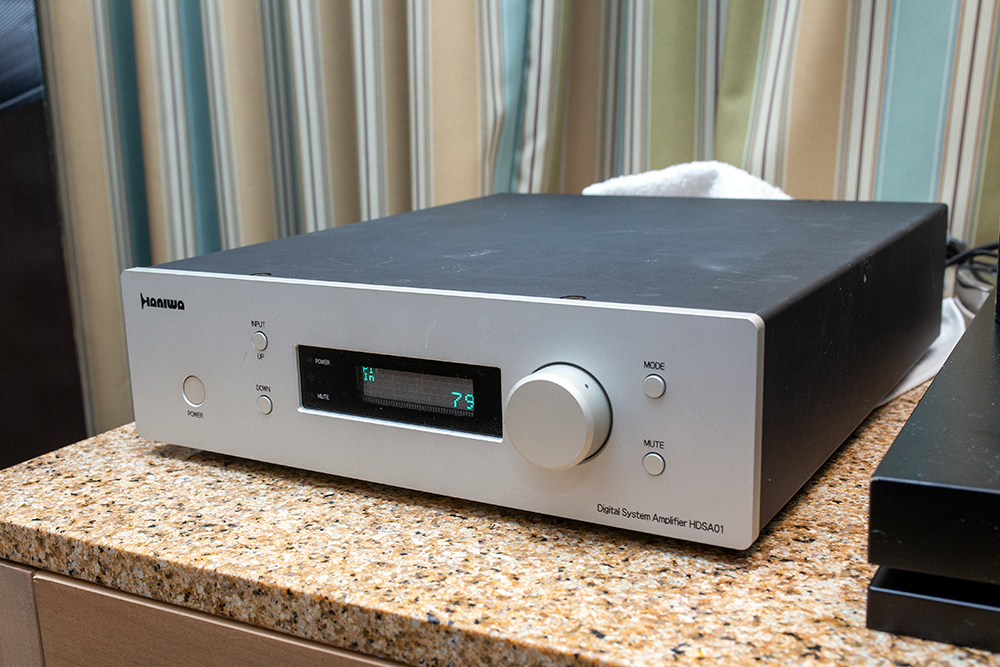 The secret to the system is that the speakers don’t act alone. For the not-inconsequential price of $25,000, you get the HSP01 speakers and their pole stands, plus the magic pill from Haniwa that allows these speakers to do their thing: the HDSA01 digital processor and amplifier. Inputs for the HDSA01 include single-ended (RCA) analog (there’s an internal analog-to-digital converter, since the signal must be digitized), as well as optical, coaxial, AES/EBU, and USB digital inputs. Inside, there’s also a DSP that tailors the signal’s frequency and phase such that the built-in 400Wpc (4 ohms) amplifier can drive the HSP01s to their potential. Haniwa claims the HSP01’s bass goes down to 30Hz (-10dB), which might be a little optimistic, though I can say that the pair did deliver deeper bass than any single-driver speaker I’ve heard, outside of a couple of Cube Audio models. And the highs weren’t too bad, either. But it was the midrange that was to die for -- smooth, detailed, and realistic. All in all, kudos to Haniwa for joining the club with Cube in helping to convince me that all single-driver speakers aren’t necessarily really, really bad. 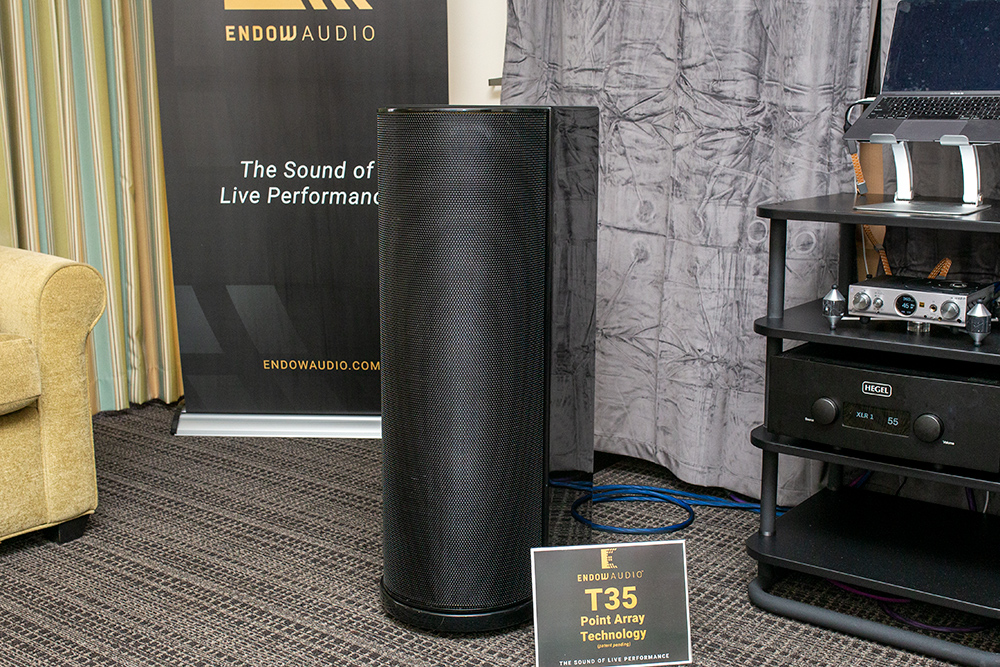 When I saw the Endow Audio T35, it looked like another box-type speaker trying to be prettied up with a fancy grille -- this one simply making a big curve around the front. For the $19,900/pair being asked, the speaker didn’t seem like much. But when I saw the T35 with its grille off, I had the same thoughts running through my head as when I first set eyes on MC Audiotech’s Forty-10 loudspeaker -- I didn’t know if I was looking at a whole host of really good ideas or really bad ones. After I listened to a few songs, however, I figured that, as with the Forty-10, there must be way more good than bad -- the speaker that looks like it has a volleyball-sized tumor growing out of its front baffle (thank goodness for the grille) was being driven by a Hegel Music Systems H590 integrated amplifier-DAC and displayed bass that was ballsy and deep, highs that were more than OK, and a midband that was bursting with presence and a healthy dose of detail that really drew me into the music. They also had an effortlessness to their sound when a classical piece was played at pretty high volume. 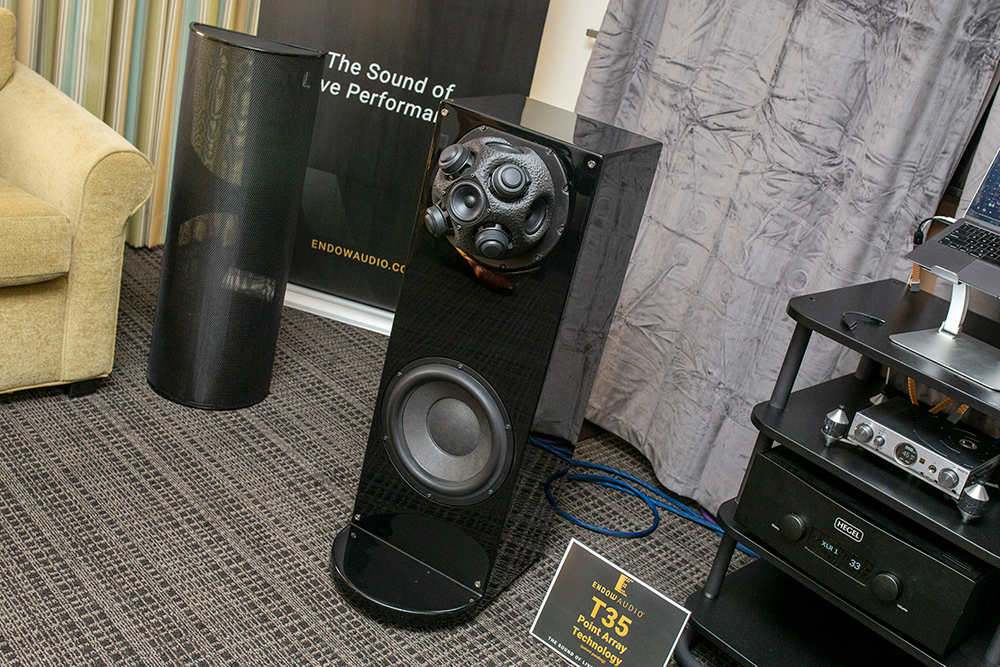 How the T35 handles the frequencies below 100Hz is easy to describe -- it has a 12" woofer operating in a sealed enclosure that, during some bass-heavy tracks, had no issue driving the low notes home with aplomb. Above 100Hz, things become more complex to describe. There’s a . . . 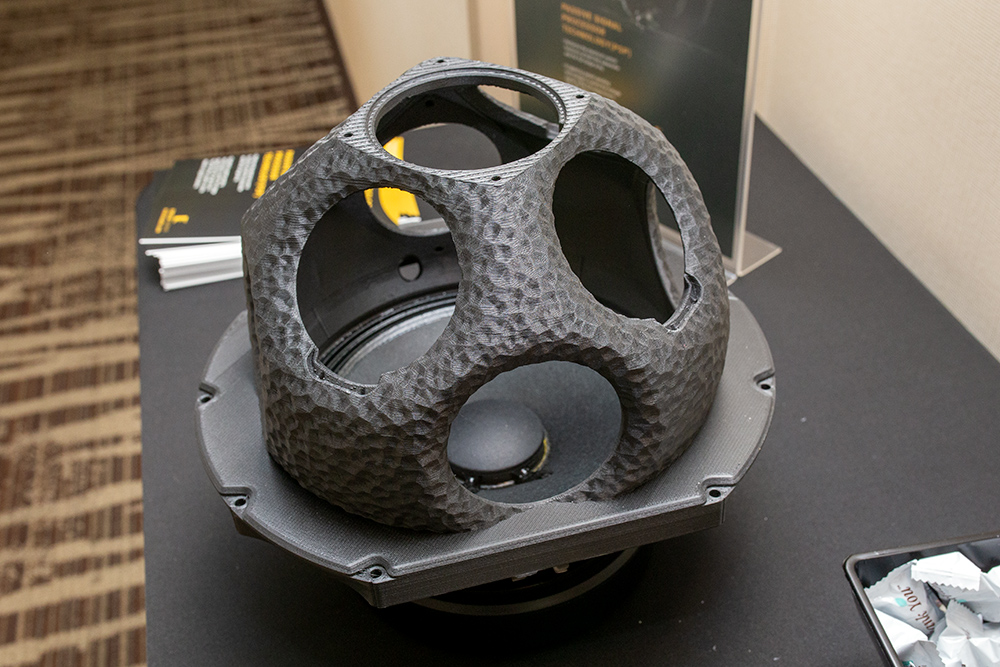 . . . hollow, more-or-less hemispherical enclosure made of 3D-printed carbon fiber that has nine smaller holes and one bigger one. The bigger one holds an 8" driver that fires into the enclosure. The smaller holes hold four 3" drivers also firing into the enclosure, as well as five 3" drivers firing outwards. According to Endow’s literature: “A single 8" driver actively loads the multiple radiating drivers so that they are well behaved near their resonant frequency range, allowing them to play down to 100Hz.” The inward-firing 3" drivers are said to “mitigate non-linear cone movement distortion and control dispersion,” while the outward-firing ones “create a point source sonic wave.” Controlling all these drivers is what they call Passive Signal Processor (PSP) technology. 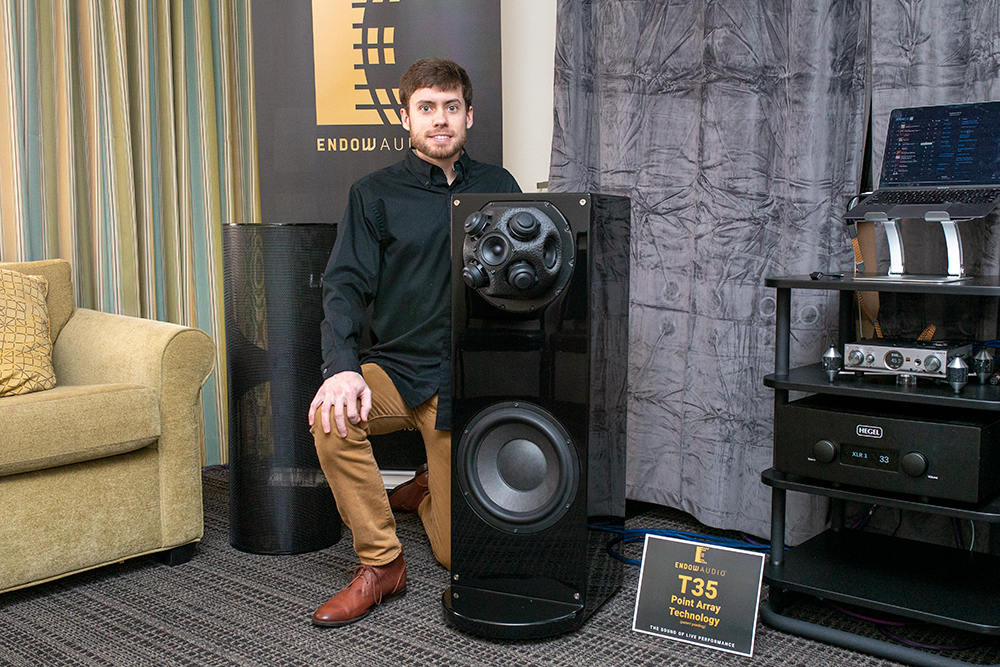 What they’re doing with this PSP technology interested me the most because that’s how all the drivers are controlled, so I talked about it with designer David Strunk (shown above), who’s from the company’s hometown of Georgetown, Kentucky. When David explained the technology, it didn’t take long before I gave up trying to fully understand what he’d created. He said it took him years of trial and error to arrive at what he now feels is the ideal arrangement for a coherent wavelaunch out the front of the speaker -- and although I’m really into speakers, I knew right then I wasn’t going to figure it all out at an audio show in a few minutes. That said, Strunk might’ve made something special -- the T35 sounded remarkably accomplished, as well as different from anything else I heard at FAE 2020. As a result, I think there’s far more to look into here in the future.