In between handing out the SoundStage! Network 2017 Products of the Year award trophies on the first couple of days at this year’s CES, I was able to find some interesting value-oriented product introductions from several of the usual electronics manufacturers that I’m familiar with -- and one from a company that really surprised me. All prices in USD.

British manufacturer Arcam released a new line of electronics called HDA, an initialism for High Definition Audio. The line is currently composed of a new CD/SACD player; the CDS50 (bottom component in the photo below); and two integrated amplifiers, the SA10 (not shown) and SA20 (top component in the photo). These models are intended to replace the CDS27, A19, and A29, respectively, in the company’s FMJ series. 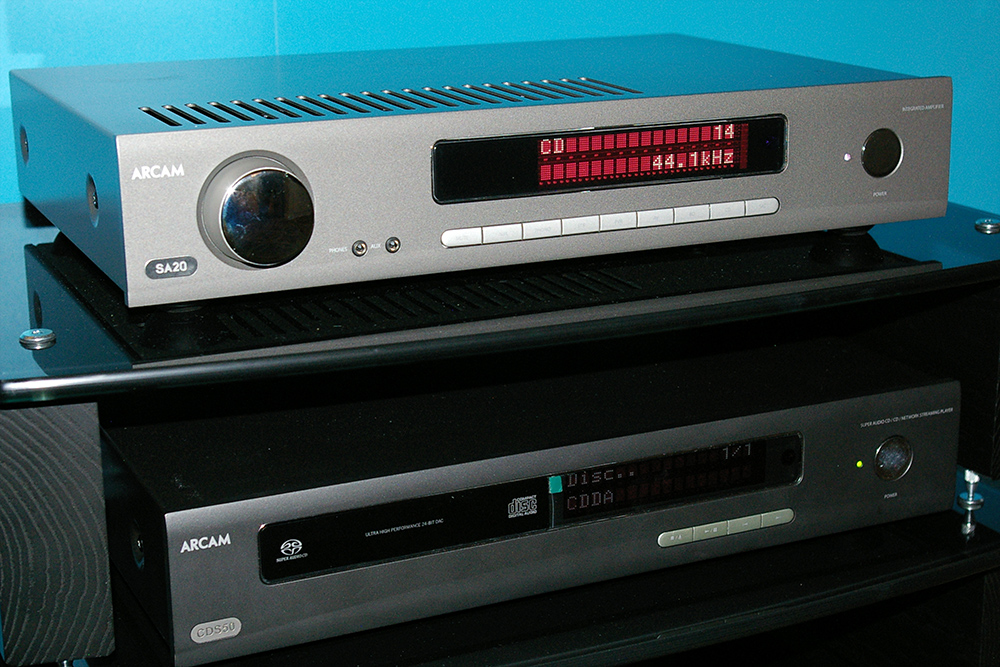 The SA20 produces up to 80Wpc of class-G power, with almost 20Wpc of that in pure class A. Five single-ended RCA analog inputs are available, including one that is switchable from an MM phono input to a line-level input. It also has three digital inputs (two coaxial RCA and one optical) and utilizes an ESS Technology 9038K2M Sabre DAC chip. The SA20 also has a high-quality headphone output. The SA10 is similar to the SA20, but produces 50Wpc of class-AB power and uses an ESS Technology 9016K2M DAC chip. In addition to being a CD/SACD player, the CDS50 is also a network-streaming player -- and one of the few to stream DSD. Like the SA20, it also has a 9038K2M DAC chip. All of the new HDA series of components feature IP control and are expected to be available in April or May. Prices have not yet been determined, but will be similar to those of the FMJ models that they are replacing.

Peter Madnick was demonstrating Elac’s new line of Alchemy components, which he designed. The series consists of the PPA-2 phono preamplifier (top component in the photo below), DDP-2 DAC-preamplifier-streamer (bottom component in the photo), and DPA-2 power amplifier (see next photo). Housed in a slim steel chassis with a CNC-milled aluminum faceplate, each Alchemy component features a toroidal transformer and LCD display. 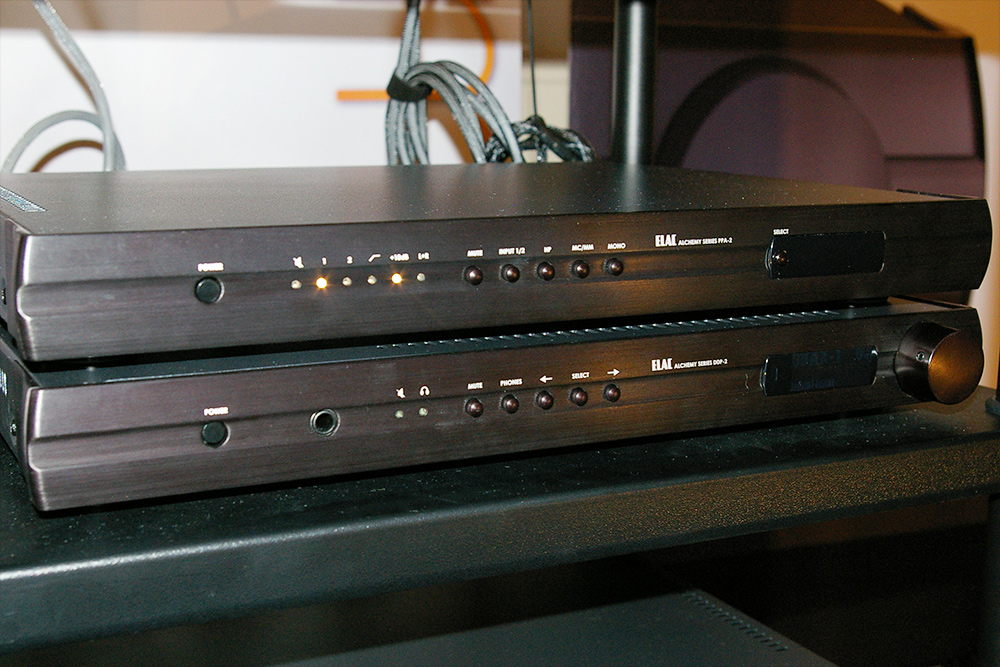 The DDP-2 has a 32-bit/384kHz DAC operating in digitally balanced mode, has selectable DSP filters, and is MQA capable. It supports Discovery, Spotify Connect, Roon, AirPlay, and Bluetooth. There are single-ended RCA and balanced XLR outputs, as well as USB, coaxial, optical, AES/EBU, I2S Audio Alchemy legacy, and I2S HDMI digital inputs. RCA and XLR analog inputs are also provided. There is a home-theater bypass mode, and the analog volume control is digitally controlled. The PPA-2 MM/MC phono preamplifier has continuously variable MC loading from 5 to 999 ohms, which is shown on the LCD display. Precise RIAA equalization is provided using high-quality metal-film resistors, as well as polystyrene and metalized polypropylene capacitors. The PPA-2 also has a user-selectable rumble filter. 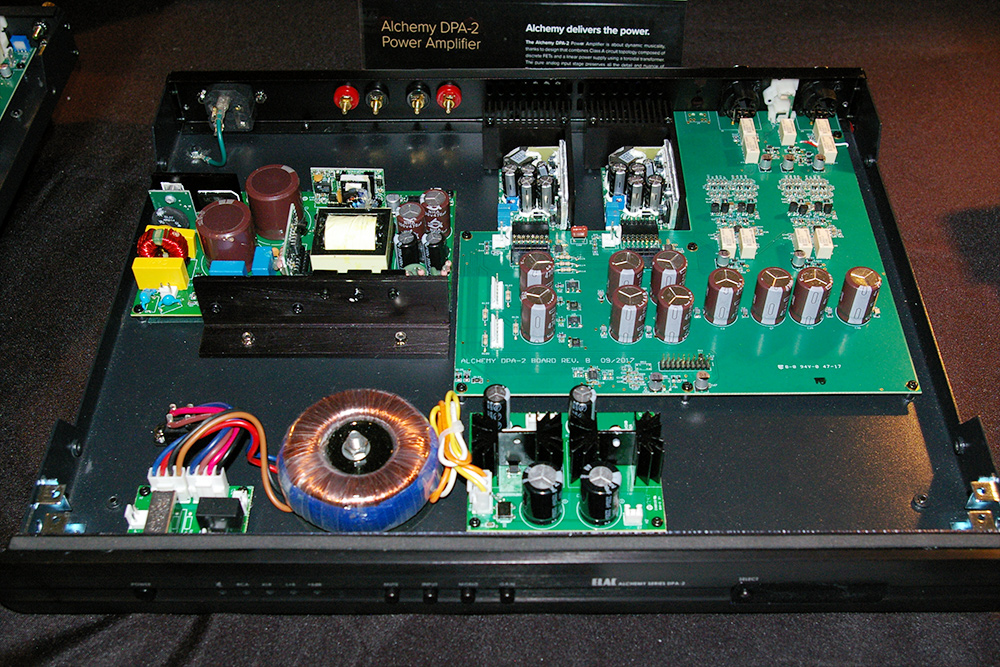 The DPA-2 power amplifier is switchable from 350Wpc in stereo mode to 650W in mono mode. The class-D output stage with switching power supply is mated to a class-A, pure-analog input stage that has a linear power supply. There are single-ended RCA and balanced XLR inputs, in addition to selectable high/low gain to better match the amp’s input to a preamplifier’s output. The PPA-2 and DPA-2 are priced at $1000 and $1500, respectively, and are expected to be available in March or April. The DDP-2 is $2500 and will be available later in May or June. 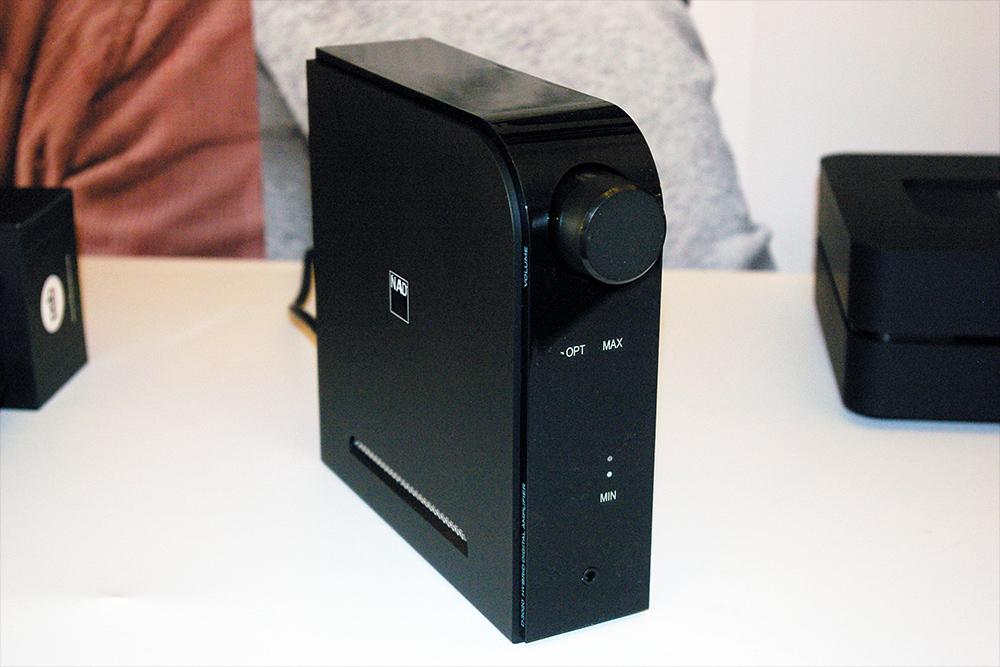 NAD’s new D 3020 V2 hybrid digital amplifier is an update of its D 3020. It’s cosmetically nearly identical, but has added an MM phono stage and analog line-level input while losing the USB digital input the original had. The phono section is said to have highly accurate RIAA equalization and extremely low noise, as well as a feature NAD calls Infrasonic Warp Filter. The D 3020 V2 is still rated to produce 30Wpc continuous and greater than 100Wpc of dynamic power at 4 ohms, like the original, and also has optical and coaxial digital inputs, a subwoofer output, and Bluetooth aptX capability. Perhaps best of all, at $399, the new D 3020 V2 costs $100 less than the previous version! 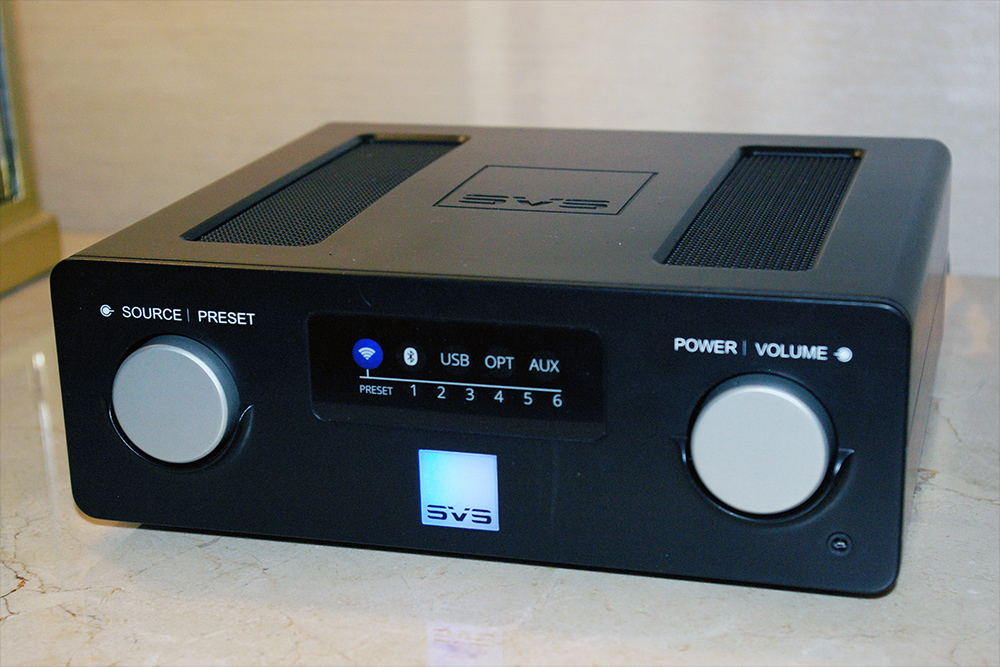 SVS is best known for its high-value subwoofers, so I was more than a little surprised when I came upon the company’s tiny Prime Wireless SoundBase. Designed as an integrated amplifier-DAC-streamer that turns any set of speakers into a high-quality “wireless” system (you still have to connect the speakers to the SoundBase with wires), it provides a very robust 150Wpc of amplification and has a 24-bit/192kHz DAC built in. In addition to the usual array of physical inputs, The Prime Wireless SoundBase features Bluetooth and DTS Play-Fi technology, and is also Amazon Alexa enabled. Priced at only $399, the Prime Wireless SoundBase is expected to be available in late spring.