AISE 2018: The Craziest (and Maybe Best) Speaker in Vegas This Week

The attendees at the ALMA International Symposium and Expo (AISE) 2018, held this week in Las Vegas, are mostly audio product design and testing professionals. Having heard and tested almost everything, they’re more skeptical of new technologies than attendees at an ordinary audio show might be. So when a friend of mine who’s a veteran of the audio measurement industry insisted I go hear a new speaker technology being demoed at a suite in the South Point Hotel, which hosted AISE, I figured I’d better go. I’m really glad I did.

The technology comes from Bayz Audio, a consulting company headed by Hungarian audio engineer Zoltán Bay. It’s a treble (and maybe midrange) driver called the Bay Radial Speaker. It’s basically two adjacent cylinders about 6" high. The cylinders, which are driven by a voice coil and magnet inside, expand and contract to produce sound waves. According to Bay’s measurements, the driver is omnidirectional at 2kHz. Even at 20kHz, a frequency at which most tweeters have a flashlight-like dispersion pattern, the measurements show a pattern with strong response in every direction. He’s hoping to license the technology to speaker companies. (It reminds me a little bit of the Linaeum tweeter of the mid-1990s, which was licensed to RadioShack, although it seems substantially different.) 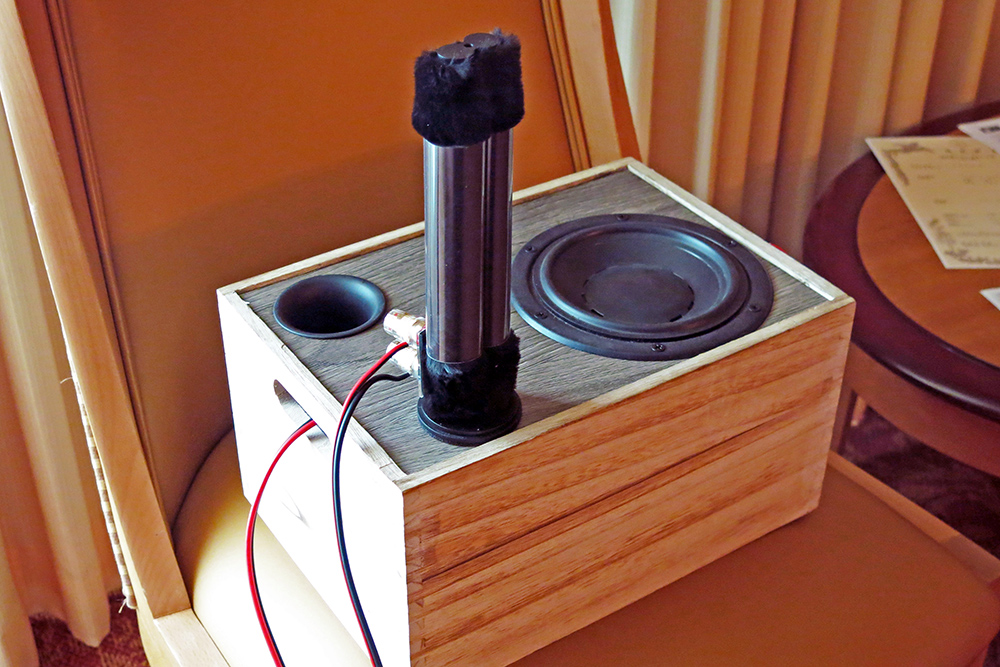 Bay told me he decided to attend AISE only two weeks ago, and threw together a pair of demo speakers for the show; time did not permit him a great deal of fine-tuning. Each speaker was a ported box with an upfiring 6.5" woofer and a Bay Radial Speaker sitting on top, sitting atop a hotel room chair. They were powered by class-D amps in small boxes, using a laptop as the source, connected with a cheap analog cable to the amps -- in other words, the furthest thing from a high-end audio setup.

To my ears, the demo was even better than I’d been told. Most stunning was that the stereo image was focused, yet the sound was among the least sweet-spotty I’d ever heard from a stereo system. When I moved my head to the left, in front of and then beyond the left speaker, I still heard a broad stereo stage; the image did not collapse into the nearest speaker as it would with almost all stereo systems. I thought the long, tall profile of the driver might narrow its vertical dispersion, as with a typical ribbon driver, but when I stood up I heard very little fall-off in the treble.

Speakers of such unusual configuration often dazzle the listener by highlighting certain parts of the audio band, but create unnatural midrange and treble colorations in the process. Not so with this one. When Bay played me a gorgeous recording of bassist Ray Brown and guitarist Laurindo Almeida playing a mash-up of Thelonious Monk’s “’Round Midnight” and Beethoven’s “Mondscheinsonate,” Almeida’s nylon-string guitar sounded as natural as I’ve ever heard one sound through speakers. The treble was exceptionally clear without exhibiting the steel-like twang that some speakers wrongly add to nylon strings. The instrument also sounded exactly as large and full as it really is. I especially loved the speakers’ portrayal of the robust, dark sound of Brown’s bowed bass melody, and the subtle little grunts and hums he made to himself as he played.

Although Bay wasn’t promoting the speakers for their bass response, the little 6.5" woofers in their modestly sized boxes delivered impressive low tones of the sort I’d normally expect to hear from a small- to midsized tower speaker. Yet Bay built them from cheap wooden boxes he bought at a store. When I tapped their sides, the flimsy cabinets felt as acoustically dead as if they were filled with mud. Sadly, Bay wouldn’t reveal how he’d accomplished this. (And no, they weren’t filled with mud, nor were they particularly heavy for their size.) 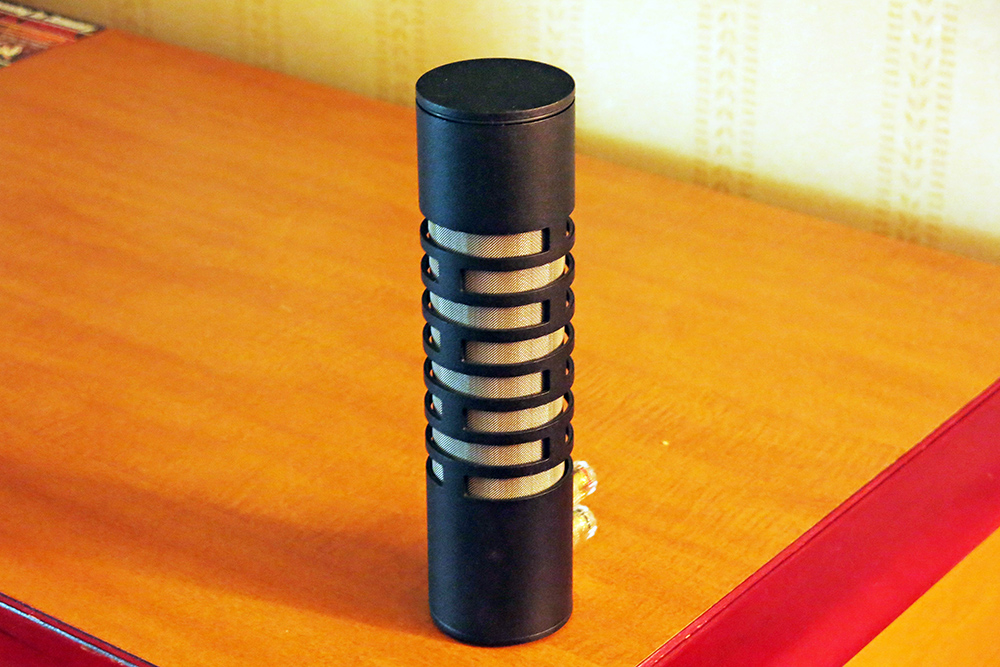 According to Bay, the driver is effective down to about 2kHz as currently designed. He said a larger version could drop down to somewhere between 200 and 500Hz, and that it could also be designed to reproduce ultrasonic frequencies (i.e., above 20kHz) if desired. Although he demoed it in a largely free-field situation, with the drivers free to disperse sound 360 degrees, he said the Bay Radial Speaker can also be mounted on a wall.

I don’t know anything more than I saw or heard, so I don’t know if the Bay Radial Speaker is a sufficiently practical technology to make an impact on the speaker world. But I really wish that instead of being one of only a handful of people hearing this as a cobbled-together demo at the South Point Hotel, I’d heard it later this week as a finished product debuting at the Venetian, where I bet it’d have been the talk of the audio cognoscenti at CES. We’ll have to wait and see what the next year brings.