The Association of Loudspeaker Manufacturing and Acoustics (ALMA) hosts its annual convention, the ALMA International Symposium and Expo (AISE) every year in the days leading up to CES, held each January in Las Vegas. AISE 2018 kicked off today at the South Point Hotel with a full slate of seminars targeted at audio product engineering and measurement professionals. During the first day alone, I found myself involved in more fascinating discussions about audio than I’d normally experience in a year’s worth of audio shows.

The first presentation I heard was one of the best -- a talk by Jacob Soendergaard, the senior account manager for headphone test equipment provider Head Acoustics. Soendergaard’s presentation was essentially an examination of the testing methods commonly used to gauge the sound-isolating characteristics of noise-canceling headphones. He later gave me a demo of a fascinating system his company is promoting in the hope of improving the headphone manufacturers’ isolation measurements -- and ultimately, helping those manufacturers improve their products’ noise-canceling performance and add useful new modes. 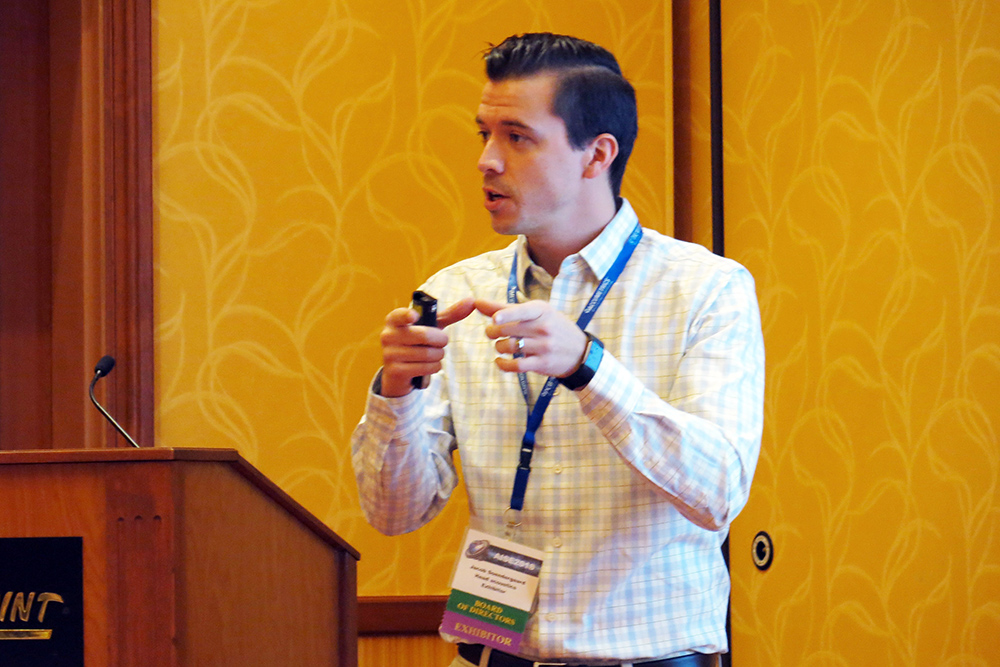 The problem he identified, and which I’ve also noted when doing my isolation measurements, is that existing standard measurements are too simplified -- they test only how much pink noise can sneak past the headphones into your ears, and don’t present a realistic stimulus or take into account how users react to different kinds of external noise. You can see an example of a typical isolation measurement in the seventh chart in my recent measurements of the Sony WH-1000XM2 headphones.

To do this test, I play uncorrelated pink noise through four speakers placed around my lab, then compare the sound at the microphone of my G.R.A.S. Model 43AG ear/cheek simulator with the headphones removed, with the headphones placed on the simulator, and with the noise canceling on. It works pretty well for judging the efficacy of noise canceling in a typical jet airliner, but it doesn’t tell you much about the headphone’s performance under other use cases, such as employees in a call center, passengers in a car, and noise in a pub.

Soendergaard showed the results of tests he conducted using the above-mentioned Sony headphones and the Bose QC35 IIs, widely acknowledged as the industry standard in noise-canceling performance. Using roughly the same measurement technique I use, he came to the same conclusion I did: the Sony noise canceling is good, but Bose’s is better. But other measurements he did using realistic background noises sometimes showed a performance advantage for the Sony headphones. 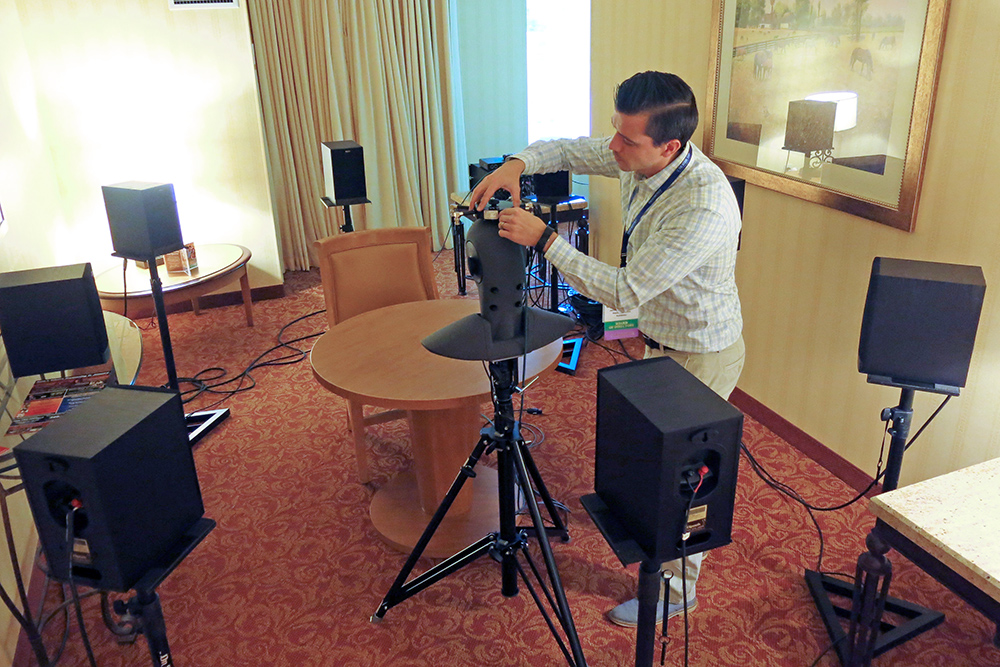 He later showed me how his company simulates the sounds of places where headphones are commonly used. Eight speakers (in this case, Klipsch Reference R-15Ms), were arranged on stands around a Head Acoustics HMS II.3 head-and-torso simulator. An array of eight microphones (which Soendergaard jokingly referred to as “dreadlocks”) hung over the HMS II.3. This system had been used to record sounds in various environments. A single microphone was hung over each ear and the simulated mouth, with two more on the left side and three more on the right (because a primary use of the system is for testing noise canceling in smartphones, which are generally held to the right ear).

Soendergaard then used the microphone array to measure the response of each speaker in the hotel room, and a Head Acoustics signal processor to EQ each speaker to compensate for its flaws and for the room’s acoustics. He then moved the head-and-torso simulator and asked me to sit in the same place, and played back sounds from a call center, the back seat of a car, a busy city intersection, and a pub. The level, timbre, and direction of the sounds were indeed realistic -- and certainly far more like an actual usage situation than the pink noise I play in my lab. 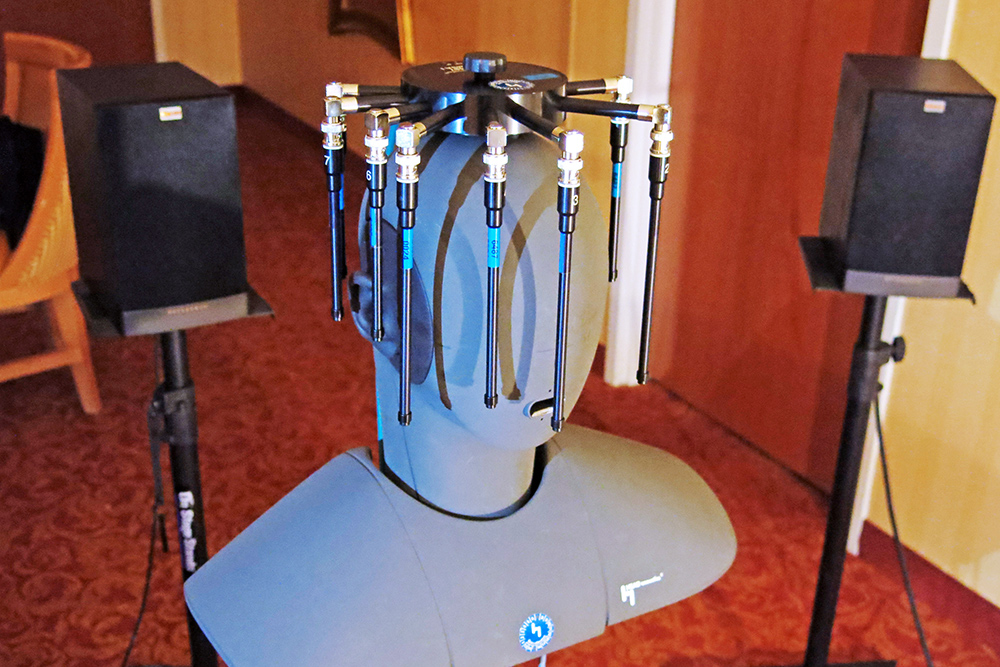 While Soendergaard didn’t make specific proposals for how to conduct these tests, and no industry standards for them currently exist, his presentation and demo definitely got me (and, I’m sure, the engineers who attended) thinking about ways we can make our isolation measurements better. Stay tuned . . .