Anyone who's followed me around an audio show knows that my short attention span precludes me from sitting through a demo that's four minutes long, let alone one that's 40 minutes. But that's the amount of time it took for QuantumLogic Surround Lab's demonstration in Harman International's mobile sound room, which was parked at the back of the exhibit hall.

So when Harman's Kevin Voecks asked if I wanted to sit through it, I almost laughed in his face at how long it would take -- I could see two dozen other exhibits in that time! But when he earnestly told me about the QuantumLogic technology, he said it was "the demonstration to see at CEDIA Expo 2011," and I gave him the benefit of the doubt that he wasn't pulling my leg and trying to waste my time. I gave in and went -- and I'm sure glad I did. 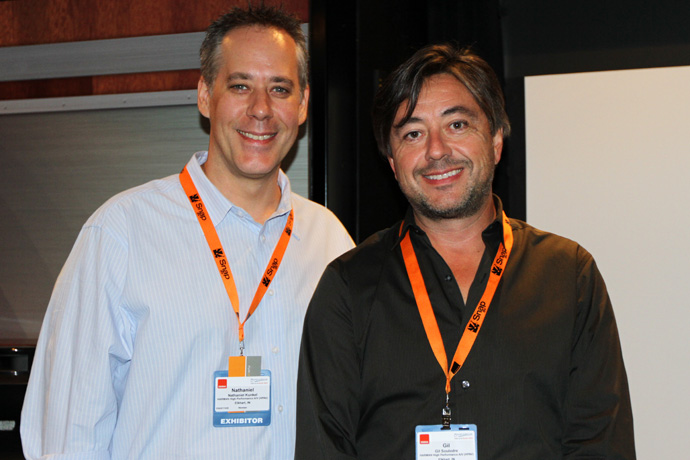 Harman is the company behind QuantumLogic Surround (QLS), but it's Dr. Gil Soulodre (right), a Canadian professor and research scientist who's the brainchild behind the system's complex computer algorithms and is really the one responsible for its creation. Nathaniel Kunkel, a producer and recording engineer and the founder of Studio Without Walls, was also on hand to talk about how the technology can benefit music playback, both stereo and surround. 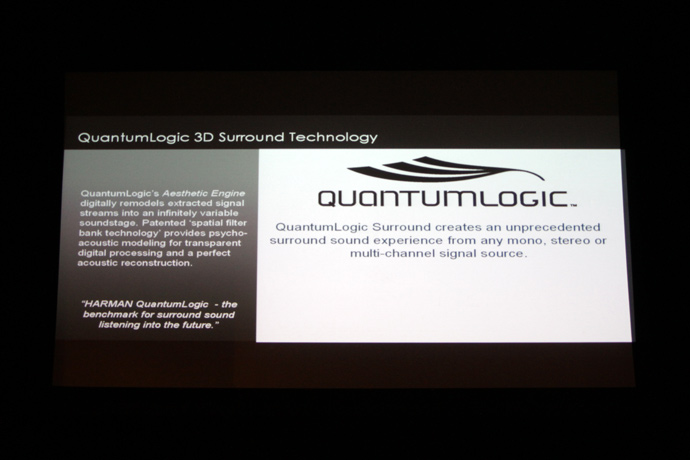 Since the demonstration was 40 minutes long, a short write-up like this one can explain only so much about it, so what I've included are some photos I took of their PowerPoint display that described the different aspects of the system. Even so, they won't fully explain the system, which, as you'll read, seems remarkably complex. Heck, I'm still trying to wrap my head around it, and I was there! 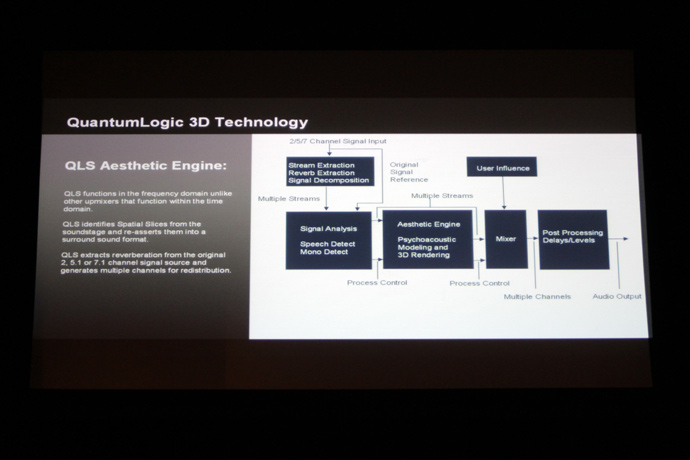 QLS is a 7.1-channel sound system. QLS 3D adds five discrete height channels. The system works by importing mono, stereo, or multichannel recordings and then precisely dissects (my word, not theirs) the program information into what Dr. Soulodre calls "streams." These streams can be something like a voice or a guitar. The system can also extract reflections and ambience.

Dr. Soulodre demonstrated the surgical precision with which his system works by playing a Frank Sinatra recording, slicing out the voice, and playing it back alone -- all the accompanying instruments and ambience were simply gone. He also played back the ambient information alone. This dissection into streams is so precise that the individual streams can be re-assembled "bit perfect" to the original recording. Soulodre stressed over and over that the system is designed to improve the sound experience without altering the intent of the artist or adding distortions by changing the tonal balance of the recording.

QLS has smarts built into it, which is where the surround magic comes in. For example, it can identify rain in a recording, whether it's a movie soundtrack or musical piece, and place those sounds into the height channels for a more realistic experience. Voices and instruments can be better focused in the stage. It can also accept "user influence" in the "mixer" section, which is where Nathaniel Kunkel comes in -- his role was to explain how the system could take a flat-as-a-pancake stereo or mono recording, or even a multichannel one, and create a more dimensional, realistic soundstage. 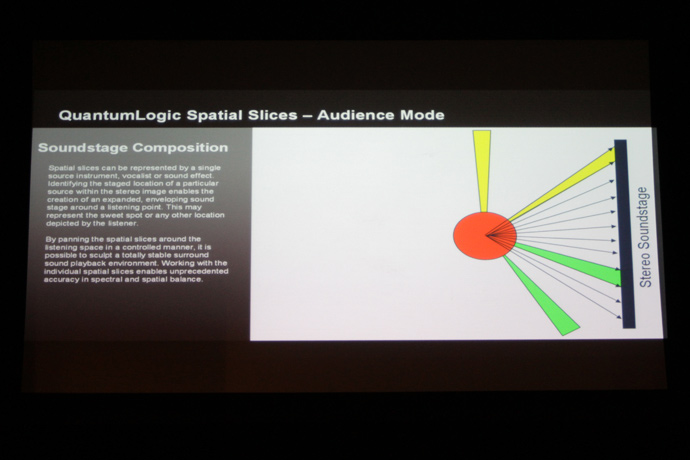 Kunkel demonstrated various musical recordings run through the QLS system, all greatly improved in terms of soundstage presentation. In particular, I was quite taken with the improvements in a James Taylor multichannel recording -- the QLS 3D system gave the soundstage much greater dimensionality and focus without ever sounding gimmicky or fake. They even turned the height channels on and off to show the effect they had. Quite surprisingly, with music they didn't do something stupid like put a guitar or voice on the ceiling; rather, the height channels seemed to improve dimensionality of the images in the stage and give the soundstage more size and space.

Even without using the height channels (i.e., QLS Surround versus QLS Surround 3D), the QLS system sounded superior to the original recording, which surprised me. The Frank Sinatra stereo recording that they demonstrated at the beginning improved greatly in terms of image dimensionality and focus, as well as soundstage width and depth, while the natural sound of the voice and accompanying instruments was left intact. 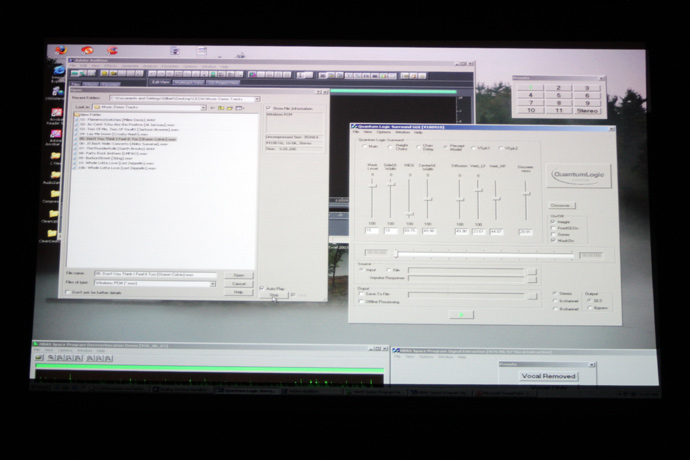 Of course, given that the system can effectively slice every aspect of the recording into discrete streams, it also has the power to shift almost anything in the soundstage to whatever place you want it to be, so there's a chance someone will use it to have the music coming from all points around you, which is something audiophiles hate. But as Dr. Soulodre and Nathaniel Kunkel kept pointing out (over and over again), it doesn't have to be that way -- the original intent of the QLS system was to enhance the music or movie experience, not take away from it.

While the surround aspects of playback were interesting, it was the dissecting of the musical information into precise streams that intrigued me the most. It wasn't like one of those situations where you see an invention and slap yourself on the head and say, "Why didn't I think of that?" Instead, I kept asking myself, "How the heck is he doing that?" It was astonishing to me to hear an existing recording sliced into discrete pieces like that. I also couldn't help thinking that applications for this kind of technology go far beyond music and movie reproduction. For instance, do you want to spy on a bunch of mob bosses talking in a crowded restaurant and figure out who's saying what? I have no doubt that this system, if it works exactly like they were demonstrating at CEDIA 2011, could do exactly that.

I quizzed Dr. Soulodre about how this dissection (again, my word not theirs) works, and he gave me the best two-minute explanation he could under the circumstances of a trade show (it's separated not just by frequency information in the recording but also by spatial information that's contained as well, and probably some other things that his PhD brain allows him to know that most of us don't), but he only scratched the surface of what this system is about. The fact that it appeared to work so well is what made this demonstration so impressive -- which is precisely why Kevin Voecks was so keen to get me into the room to hear it for myself and not just take his word that it's really something big.

QuantumLogic Surround is not a product now; it's still in development. But you can be certain that I'll be watching its development closely, and you'll likely want to learn about it too. It could change the way we listen to surround sound, and it could revitalize interest in surround-based musical playback, something that has never caught on the way stereo has. A number of things impressed me at CEDIA Expo 2011, but the QLS demonstration impressed me the most.