Michi On a Budget?: Celebrating 60 Years of Rotel With the Diamond Series RA-6000 Integrated Amplifier-DAC and DT-6000 DAC/CD Transport

When I spoke with Rotel’s CTO, Daren Orth, last year about the company’s decidedly high-end Michi X5 integrated amplifier-DAC I was reviewing at the time, he emphasized how the Michi products weren’t just intended to be one-off designs to show off what Rotel engineers could create at higher price points. Instead, they were designed as scalable platforms that could be used as a basis for other Rotel products. Some of that Michi technology went into very affordable models like the MKII versions of the brand’s A and RA series of integrated amplifiers, but to celebrate its 60th anniversary, Rotel has gone all out by introducing two top-of-the-line components in its new Diamond series, the DT-6000 DAC/CD transport ($2299, all prices in USD) and the RA-6000 integrated amplifier-DAC ($4499). While products in the new Diamond series have the same general appearance as other Rotel products with traditional black and silver finishes and slightly updated cosmetics, they are described as having “Michi-inspired” circuit designs. 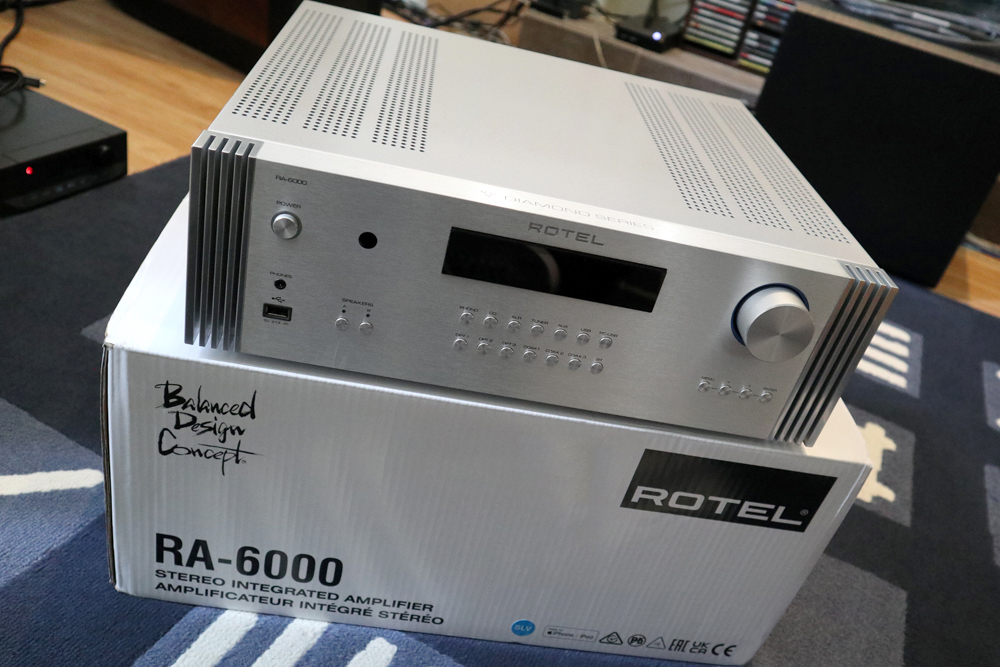 An RA-6000 review sample was the first of the Diamond components to arrive on my doorstep, and judging by its massive weight of 41.5 pounds, it definitely has some Michi DNA in it. The amp came wrapped in an attractive cloth bag to protect its finish from the vagaries of shipping. Removing the unit from the rest of its packaging, I found that it features those updated Diamond-series cosmetics, but it still looks very similar to the company’s other integrated amplifier-DACs in the RA series. The faceplate is made of a thick slab of aluminum with a brushed finish, and it has “DIAMOND SERIES” engraved on the top surface with chromed, deeply grooved end caps. The round buttons and volume knob appear to be more substantial and are made of machined aluminum. Otherwise, the dot-matrix display and complement and placement of buttons are identical to that of the RA-1572MKII integrated amplifier-DAC ($2099) I recently reviewed on SoundStage! Hi-Fi. 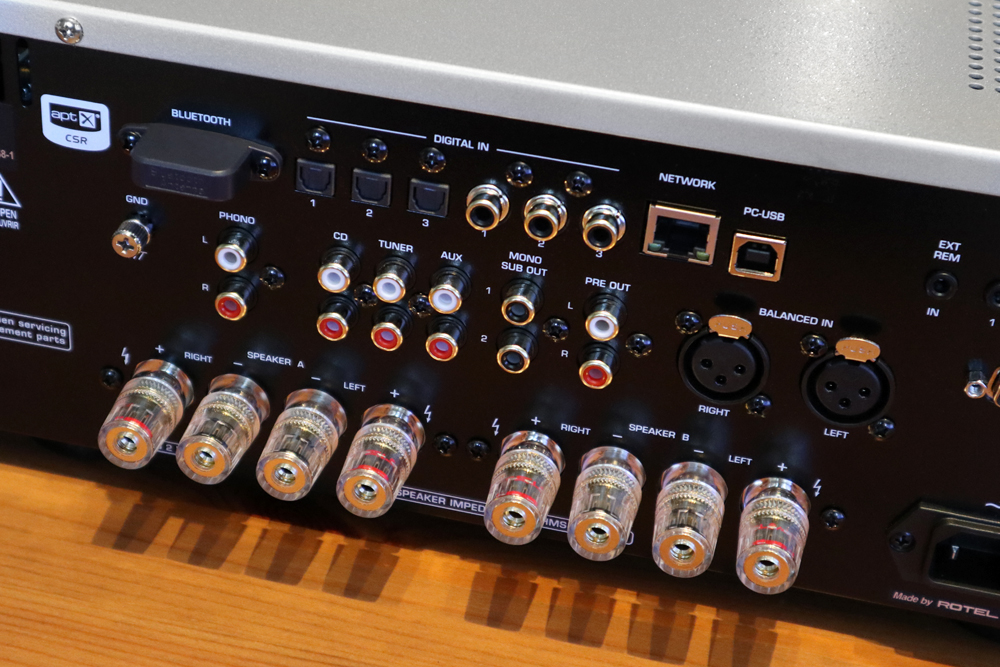 Around back, the placement of inputs and outputs is more Michi-like than that of the RA series. The analog line-level connections and MM phono input are placed in a row above the digital connections, whereas the Michi integrated amps have the digital connections above the analog connections. Overall, the layout of the RA-6000’s back panel is very similar to that of the Michi, although it does lack those gorgeous and beefy rhodium-plated binding posts found on Michi products. 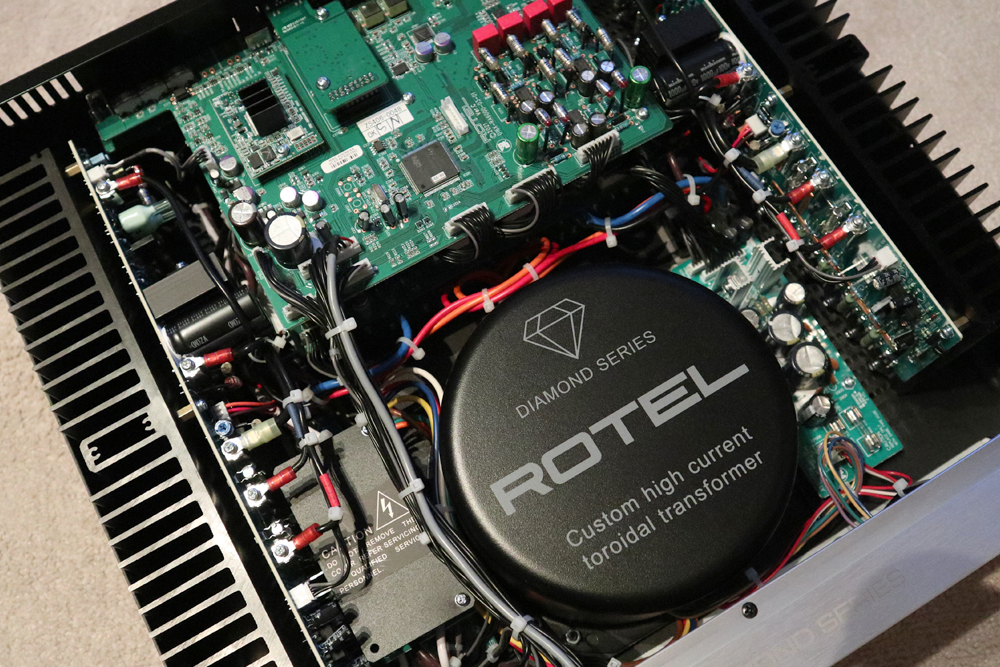 The RA-6000’s construction is quite beefy. A large, shielded toroidal transformer is placed near the front of the unit, and most of the remaining interior contains many densely populated but tidily constructed and arranged circuit boards. Very large, heavy-duty heatsinks run the entire length of each side of the interior, and the build quality is impressive and reassuring in its solidity.

The feature set of the RA-6000 is also noteworthy. With a claimed output of 200Wpc into 8 ohms or 350Wpc into 4 ohms, TI PCM5242 32-bit/384kHz DAC, support for MQA and Roon, an MM phono stage, and aptX HD and AAC Bluetooth connectivity, there is a lot going on inside of the RA-6000, as should be expected for an integrated amplifier-DAC at its price point. 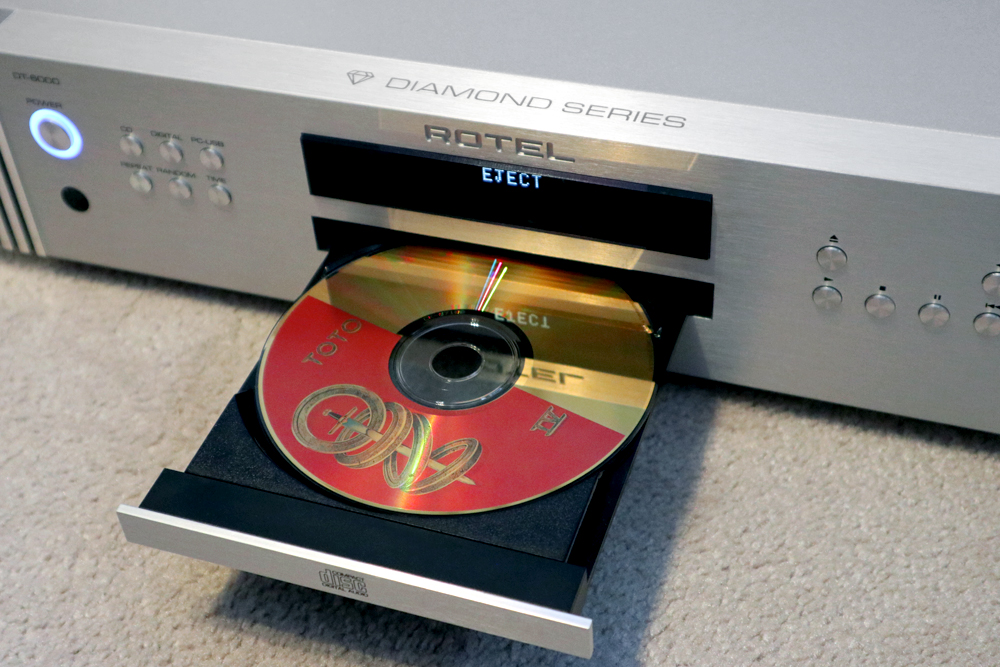 The DT-6000 review sample I received was first shipped to Ottawa for Doug Schneider to photograph and Diego Estan to measure, while the RA-6000 was shipped directly to me from Kevro, the Canadian distributor for Rotel. The DT-6000 arrived at my home a few weeks after the RA-6000, and although it is not as massive, its weight of 17.88 pounds is still pretty impressive for a DAC/transport. Compared to the RA-6000, it has an upgraded digital section with an ESS Technology eight-channel ES9028PRO DAC chip utilizing four channels each for the stereo left and right outputs with fully balanced differential circuitry. It adds support for DSD up to 11.2MHz through its USB input, although the disc transport section is restricted to reading only CDs. It, too, has a large custom toroidal transformer. It’s not as substantial as the one found in the RA-6000, but overall its build quality is equally robust. 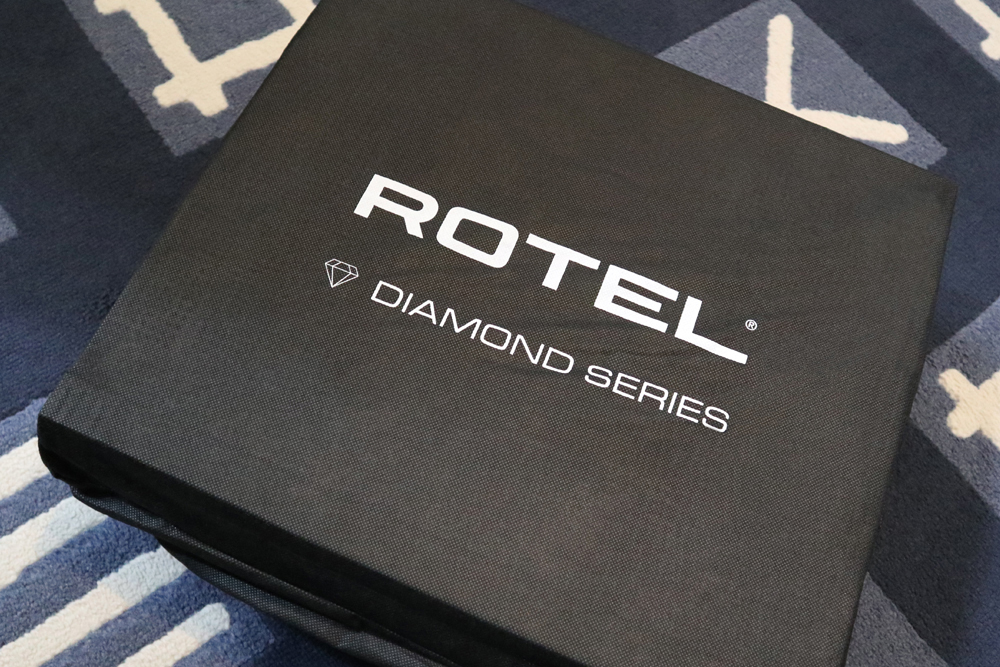 The new Rotel Diamond series RA-6000 and DT-6000 certainly have all the credentials to be high-end audio products. Even though their prices are admittedly higher than those of most other Rotel products, the RA-6000 is still somewhat less expensive than the similarly appointed Michi X3 ($5299) integrated amplifier-DAC. And having reviewed both the RA-1572MKII and Michi X5 ($7499), I am interested in finding out how the performance of the RA-6000 slots in compared to those other Rotel amps. As usual, you’ll have to wait to read my reviews of this latest Rotel integrated amplifier-DAC and its sibling DAC/CD transport, so please stay tuned!