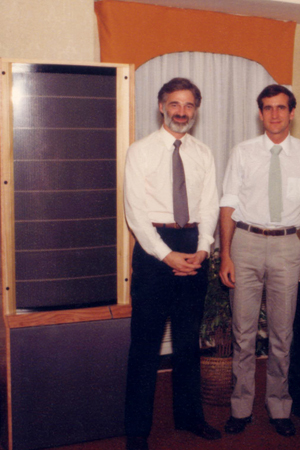 The MartinLogan speaker company was founded by Gayle Martin Sanders (left in photo) and Ron Logan Sutherland (right) in 1983, but development of their products began in the late '70s, with their first electrostatic panel finished and working in 1979. In 1983, they debuted their first product, the Monolith, which sold at the time for $5000 USD per pair. The Monolith was a hybrid design, meaning that it married an electrostatic panel to a 12" dynamic woofer. The claimed frequency response for the Monolith was 28Hz to 24kHz. In 1985, Ron moved on to other ventures and Gayle Sanders became MartinLogan's sole owner.

The Monolith II was introduced in 1985, and the CLS followed in 1986. The CLS won critical acclaim and drew a large following because it was the company's first non-hybrid design -- electrostatic throughout. The CLS's claimed frequency response was 45Hz to 19kHz, and it sold at the time for $2500/pr. Three more versions of the CLS followed over time: the CLS II in 1989, the CLS IIa in 1990, and the CLS IIz in 1992. The most expensive speakers that the company ever sold were the Statement, which sold for $55,000/pr. when it was released in 1989, and the Statement E2, which sold for upwards of $120,000/pr. after its release in 1999. The Statement E2 was discontinued about five years ago.

The company released many other stereo speaker products over the years, but in 1994 they formally stepped into home theater with the release of the Logos center-channel speaker. The Stylos, a wall-mountable electrostatic speaker, was released in 1993 and recommended to MartinLogan customers for surround use. In 2001, MartinLogan released their first subwoofer, the Descent.

MartinLogan moved into the custom-install market in 2004 with their Design-series products, which consisted of in-wall, on-wall, and floorstanding speakers. The company's next big steps were the Purity, a fully active electrostatic/dynamic-driver hybrid loudspeaker that sold in 2007 for $3295/pr., and then the CLX, which was released in 2008 to celebrate the company's 25th anniversary. The CLX sold at that time for $22,000-$30,000/pr., depending on build and finish. The CLX, like the CLS, was a fully electrostatic design and is the company's top model today -- it currently sells for $25,500-$32,500/pr., depending on finish.

In 2010 MartinLogan released the affordable Motion speaker line, which blended dynamic-driver technology with a Folded Motion Tweeter (FMT). Today the popular Motion speakers retail for $400-$2000 per pair and are a favorite among budget-conscious consumers.

The next steps for MartinLogan will be a new flagship speaker product to celebrate the company's 30th anniversary in 2013 along with other new Reserve-series products, which will only be available through selected dealers worldwide, as well as diversification into personal audio and new-media speaker and headphone products that will be widely available. 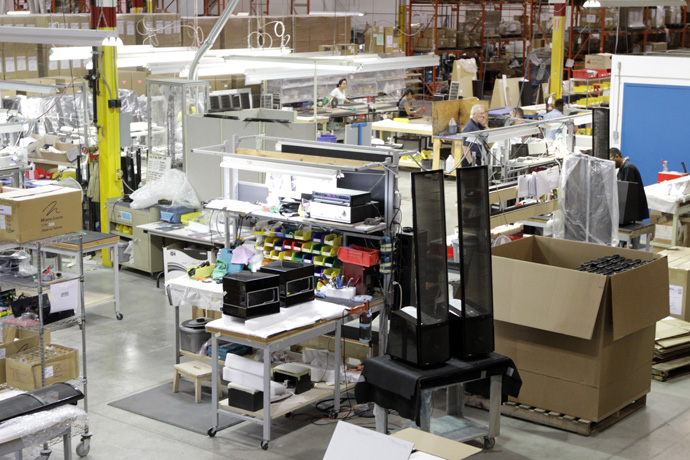 MartinLogan's main office is in Lawrence, Kansas, USA, which is where all product development and research takes place. All MartinLogan electrostatic-panel-based speakers are made in Mississauga, Ontario, Canada, which is where our tour was conducted.