A Day at Synergistic Research

On December 16, 2019, I visited Synergistic Research’s headquarters and factory, located in Santa Ana, California. Glad to avoid the unwieldy Los Angeles International Airport for the smaller and virtually painless John Wayne Airport, which is located only about ten minutes from my destination, I was greeted curbside by Andy Wiederspahn, Synergistic Research’s general manager. 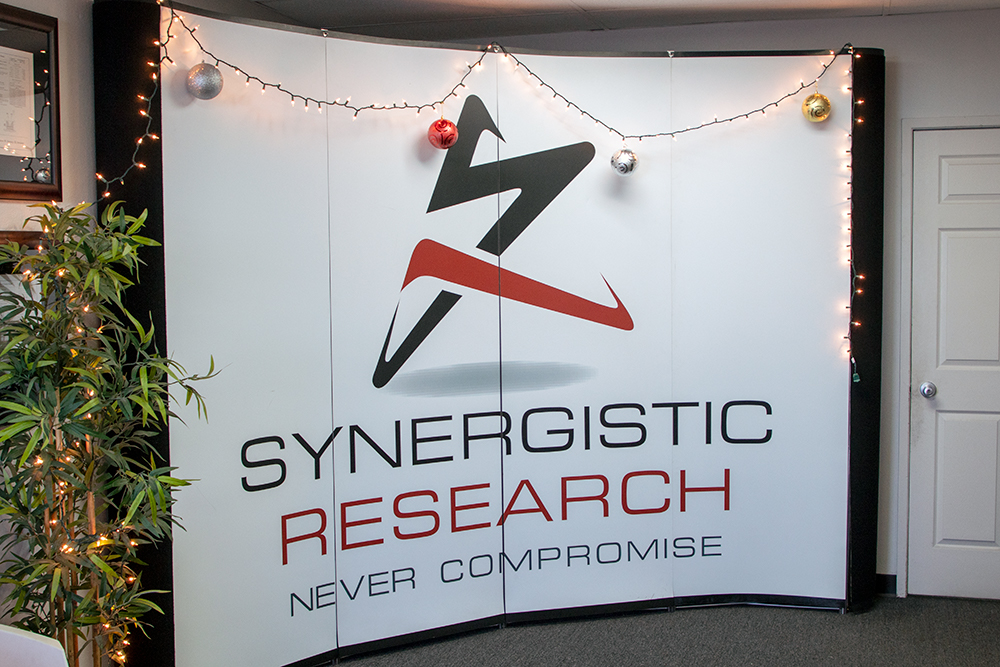 When we arrived at Synergistic’s building, I couldn’t miss the lobby’s large floorstanding sign with the company’s name, logo, and “Never Compromise” corporate slogan, all adorned with a few holiday decorations. From there, we stopped at the office suite, where about a half-dozen employees were taking wholesale orders, answering questions from dealers and retail customers, managing inventory, and performing other administrative tasks.

Cables, power cords, and plenty of them

After chatting for a bit, Wiederspahn and I entered the 12,000-square-foot factory. Unlike many audiophile cable manufacturers, Synergistic builds all of its products, even its entry-level ones, in the United States. The factory is organized around two production teams, which together consist of about 15 employees. Team 1 is tasked with building Synergistic’s signal cables and power cords, and Team 2 builds the company’s PowerCell power conditioners and other non-cable products. 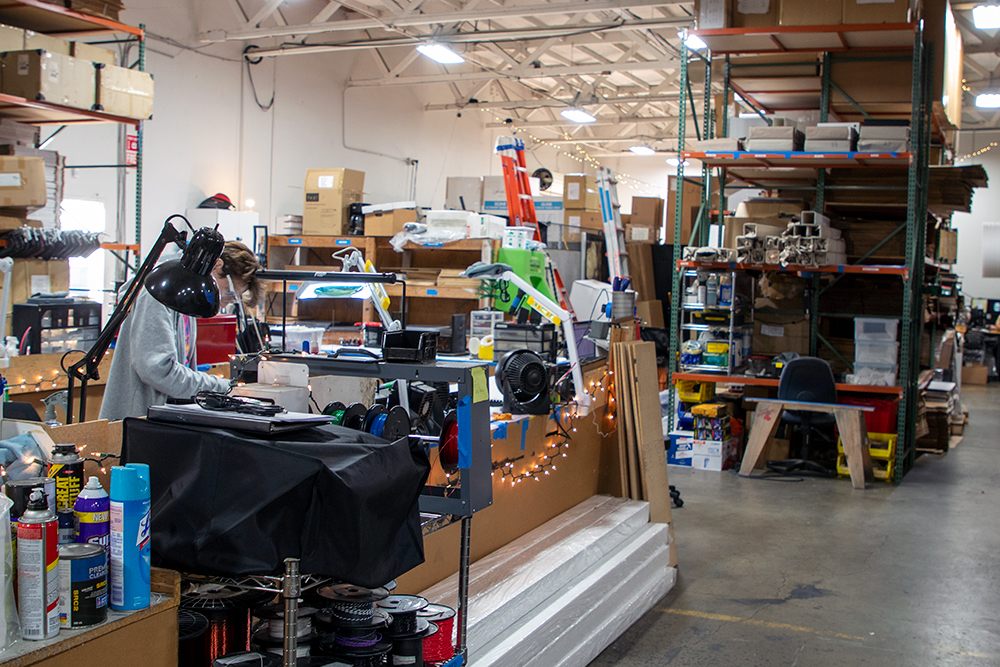 We first visited Team 1, which was making everything from Synergistic’s Core cables to its Galileo SX statement cables at the time. While the former cost a few hundred dollars for a pair of either interconnects or speaker cables, the latter will set you back $7500 and $9500 per pair for RCA and XLR interconnects, respectively, and $17,500 for a pair of speaker cables (all prices USD / cable prices for Synergistic’s standard lengths). The power cords similarly varied in price, with the Galileo SRX reference cord topping out at $9995. Also in production were numerous models of digital and phono cables.

What I did not see in Team 1’s area were any of Synergistic’s $19,995 SR25 25th-anniversary power cords. That cord, whose run was capped at 100 pieces, is sold out. I did, however, see many PowerCell Ones ($999). Technically a power conditioner that contains a simplified version of the SR25’s active electromagnetic (EM) cell, the One normally falls under Team 2’s jurisdiction. But since the One has the geometry of a power cord (it filters AC power for only one component), Team 1 builds it. 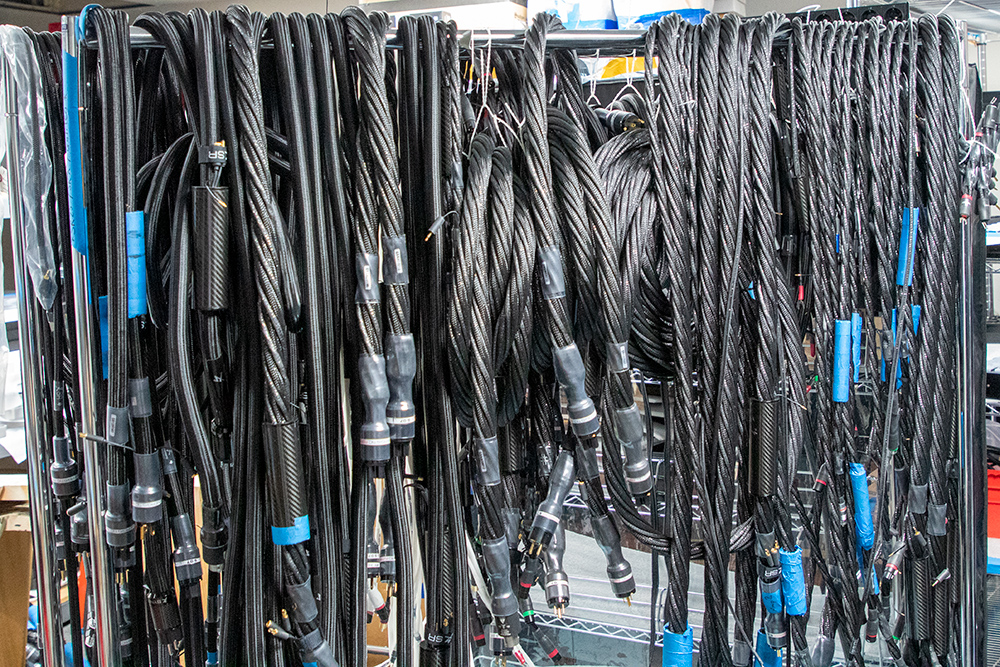 What struck me as I left Team 1 was the skill of the cable makers. Particularly as you go up the line, the products’ geometries become very complex. For example, the Galileo SX speaker cable consists of 19 geometries, which are combined in an air dielectric and then shielded, braided, and jacketed. An EM cell is then attached to the geometries, and the final result has to be aesthetically perfect. It’s no wonder that Synergistic has refused to move production overseas.

Wiederspahn and I then headed over to Team 2, where power conditioners were being built at seemingly every price point. Still, another product that was missing was Synergistic’s top-dog power conditioner, the PowerCell Galileo SX ($19,995 with Galileo SRX power cord), whose current production run of 50 units is also sold out. 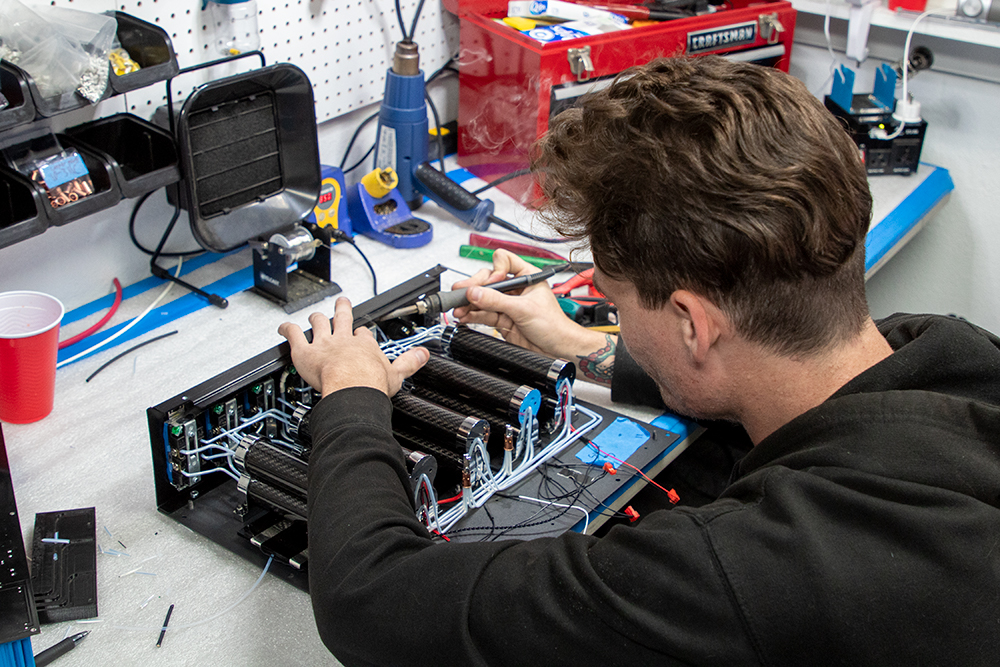 Beyond PowerCells, Team 2 is responsible for building a dizzying number of products, many of which come in a variety of sizes, prices, and/or types. These include electrical ground blocks, Atmosphere low-frequency pulse-emitter room-treatment products, Tranquility Base vibration and electromagnetic and radio-frequency interference (EMI and RFI, respectively) management platforms, fuses, AC outlets and covers, cable risers, acoustical panels, and MIG component footers.

Team 2’s products also include pea-sized products that bear names such as High Frequency Transducer (HFT), Electronic Circuit Transducer (ECT), Ground Circuit Transducer (GCT), and Phono Transducer (PHT). Depending on the type, these products are placed on a listening room’s walls and ceiling, as well as on the inside and outside of components, on speakers, or even on turntable cartridges, all in order to improve performance. 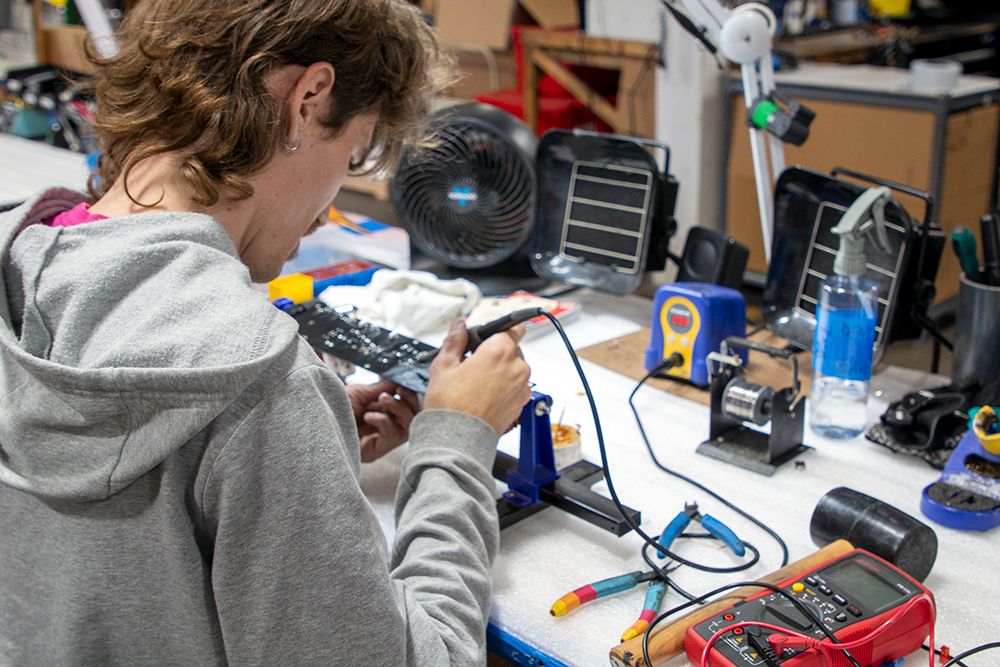 As I continued my tour, it soon became clear that the need for skilled craftsman at Team 2 is just as acute as it is for Team 1. For example, the PowerCell’s EM cells are extremely difficult to build -- laminate conductive layers and biasing material must be hand-rolled and placed into carbon-fiber housings. For those PowerCell models featuring glass tops, the wiring must be aesthetically perfect. Wiedersphan stated that the wiring process for those models not only takes many hours, but it also requires a lot of experience and the builder would have to have first made dozens of the lower-priced models that don’t have such a top.

Despite the complexity of Synergistic’s product lines and the intricate work, everything at the factory appeared well under control. In fact, Wiederspahn brought me to a computer to show me the company’s custom-made product-management tool, which identifies the production status, time to completion, and names of the builder and quality-control (QC) checkers for every order.

Wiederspahn further explained that despite the large number of Synergistic’s products, there are some things that all or most share. First, there are the company’s proprietary technologies, including its Quantum Tunneling treatment and Uniform Energy Field (UEF) filtering material, which are now incorporated within almost every Synergistic product. The Tunneling treatment is said to improve the transmission of electrons through a conductive material by subjecting it to a 1,000,000V charge at certain frequencies and pulse modulations via an arc of current that moves from the Tesla machine’s coils to a vise grip that holds the material. As part of this tour, I visited the room where the Quantum Tunneling treatment is applied with one of four Tesla-coil machines, but since the process is very loud, Wiederspahn gave me a pair of protective headphones. When one of the machines was switched on, the voltage soon became high enough that, in a Frankensteinian moment, a bolt of electricity arced through the air from the machine’s coil to the vise grip! 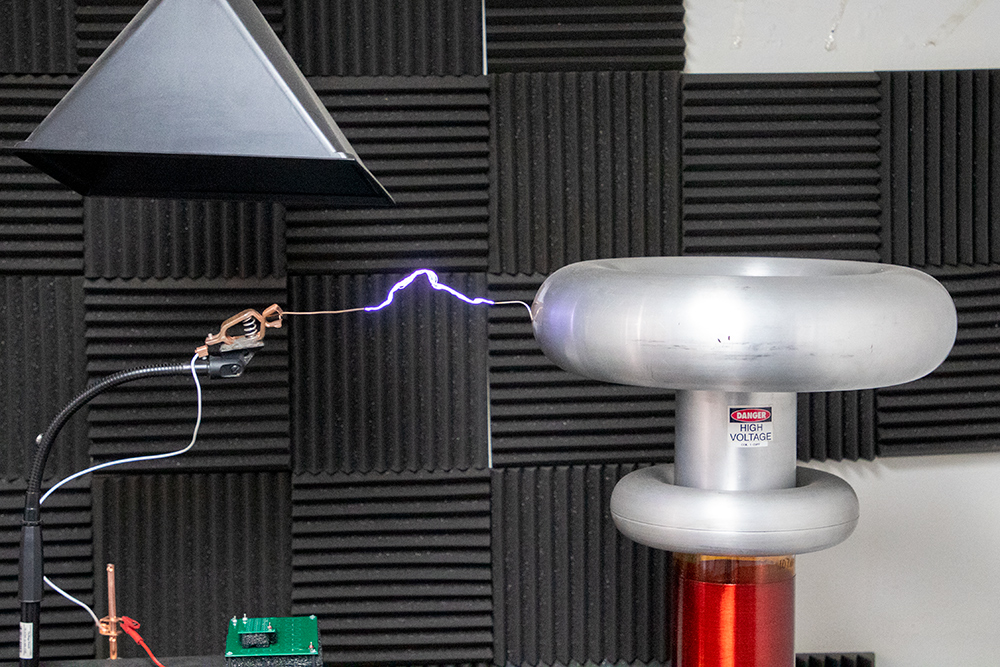 A crucial step in the Synergistic Research Quantum Tunneling process

Finally, every product is subjected to painstaking QC measures. Each product builder signs off on a checklist covering construction, aesthetic appearance, and, where applicable, electrical circuit integrity. Team QC managers then perform a second check, and the factory manager often conducts a third check. At the end of it all, the product goes to the packaging department for a final check and a cleanup. 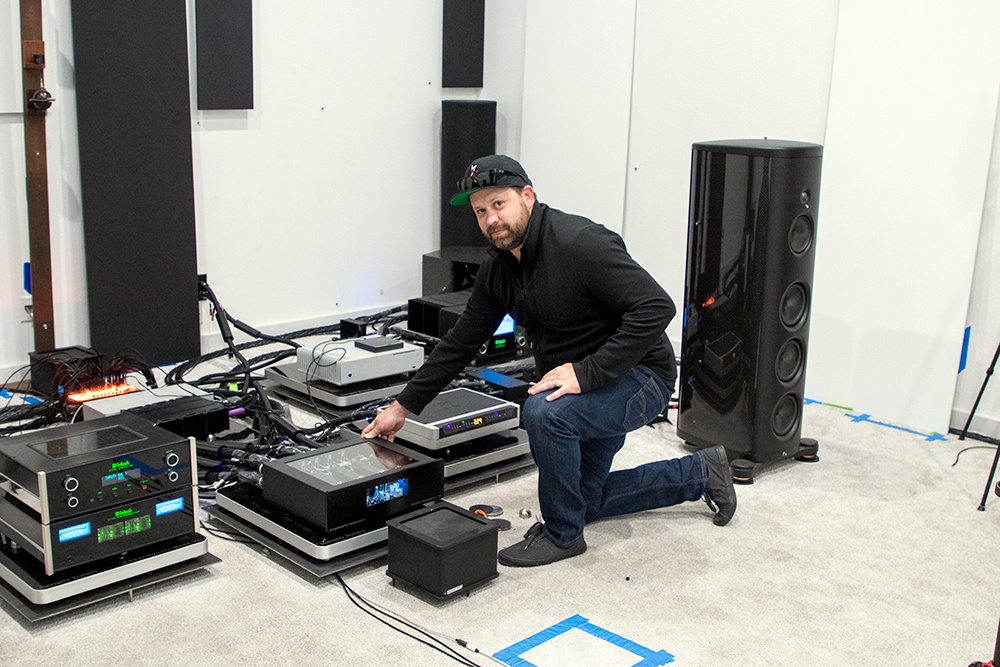 Andy Wiederspahn in the listening room 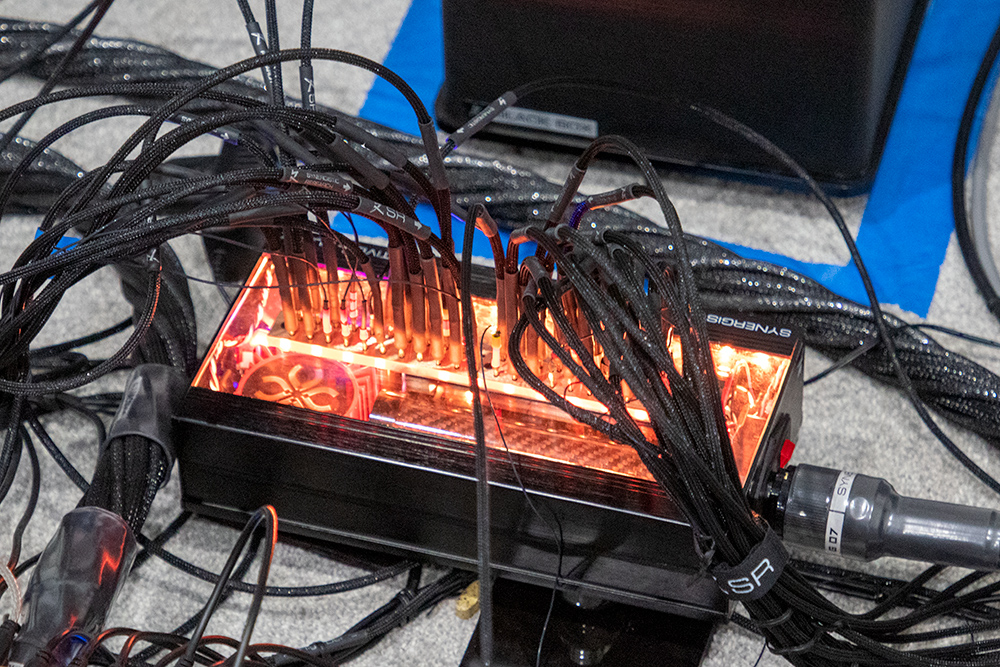 It was now time to play music, and Wiederspahn streamed a variety of tunes through the Baetis server. The sound was quintessentially “Synergistic Research” -- lively, dynamic, and three-dimensional, with highly accurate timbre and a virtually nonexistent noise floor. Guitar strings were warm, vibrant, and detailed. Horns were powerful in the lower registers and penetrating further up the spectrum. Lower-pitched middle-violin voices were lustrous and metallic. Then there were the life-size sonic images, which were so solidified and surrounded by air that I almost felt as though I could walk between them. What an experience!

Back in the office suite, Wiederspahn told me about Synergistic’s recently introduced products, including its Orange fuse ($159 each), UEF Performance Elevator cable riser ($399 per set of four), carbon-fiber AC cover plate ($149 in duplex size), and Tranquility Pod ($749), the latter of which is placed on top of or below components to manage EMI and RFI interference in the same fashion that the larger, more expensive, and more powerful Tranquility Bases do. Wiederspahn also disclosed that Synergistic will soon be introducing additional products, including reference-grade component footers, a record weight, a room-acoustics product, and a component rack. 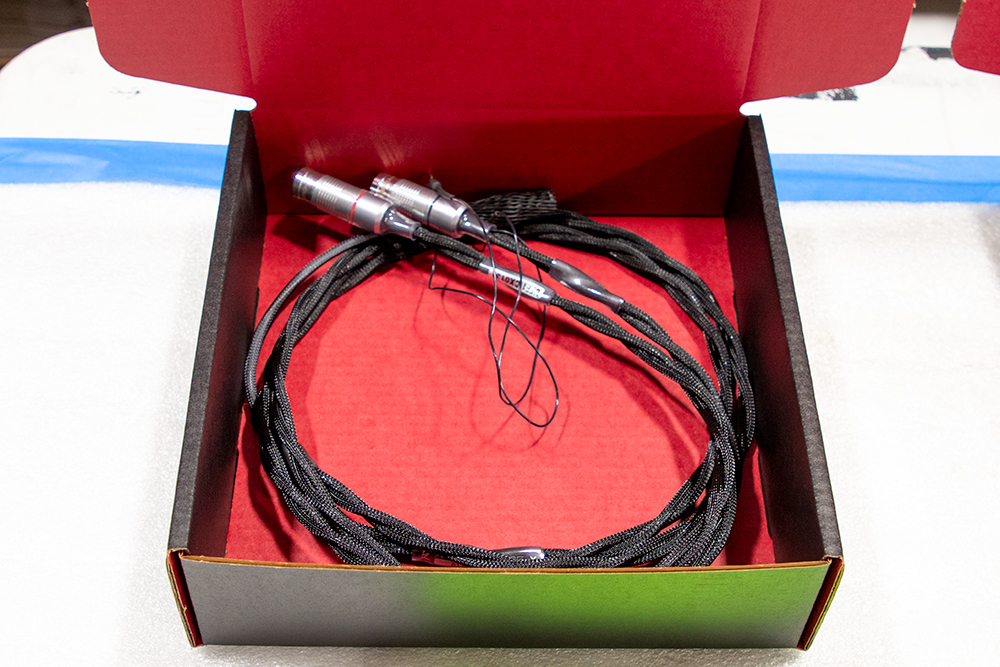 High-tailing it out of the building to catch my flight, I couldn’t help being impressed by the way that Synergistic Research manages an extremely large and growing product catalog. Most remarkable, though, were the sound in the company’s listening room and the skill of its workers. I also couldn’t help wondering whether there’s any way to convince my better half that we need yet another audio rack in our modestly sized home. On the other hand, something tells me that domestic bliss may best be served by a new set of footers.