On the spur, less than two weeks before its start, I decided to fly out to AXPONA '13 (March 8-10), the first major audio show in Chicago since Stereophile was there in 1999. I wanted to get out of Oregon for a while, hear the new Von Schweikert Audio VR-100XS Universe speaker that was to make its debut there, and take in Anna Netrebko and Joseph Calleja singing the iconic roles Mimì and Rodolfo in La bohème at the Lyric Opera of Chicago. I'd never heard either of them sing live -- the gorgeous Russian soprano nor the burly, "Caruso-like" Maltese tenor, and both had been among my favorite recording artists for years. When I went to the opera's website, there were only three single tickets left. I nabbed what I thought would be the best seat -- one in the first balcony -- and then booked a plane to O'Hare.

I'd never been to AXPONA, and likewise never to the famed Lyric Opera. Neither venue disappointed, and both were sold out. I heard that there were over 4000 AXPONA attendees, and I spotted fellow audio scribes running around everywhere at the conference hotel -- the DoubleTree by Hilton O’Hare in Rosemont, Illinois. The show was spread out over five floors with many of the 90 rooms sponsored by local dealers. And though there was lots of great gear everywhere, I mainly focused on new equipment for this story. 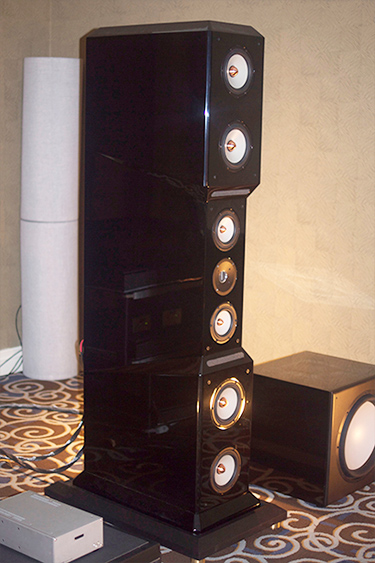 Von Schweikert Audio took up a large mezzanine room with the debut of its 6' tower speakers, the VR-100XS Universe ($140,000 USD per pair, shown in photo right). These are Albert Von Schweikert's all-out assault on the outer limits of high-end speaker design that he hinted about, off the record, back when I interviewed him for Ultra Audio in June of 2012. The Universe has a form factor reminiscent of the VR-11SE and comprises two towers plus two outboard EX V15 Shockwave subwoofers (for the show, augmented by four additional EX V15 subwoofers at $10,000 apiece). Each tower features seven front-firing drivers all manufactured by Excel to work together for speed and coherence, plus two rear-firing ambient tweeters. The drivers are mounted on a triple-wall cabinet of HDF, compliant damping, and a kind of concrete made of crushed rock. The speakers were biamped with a KR Audio Kronzilla SXI MKII ($21,000) on the midrange/tweeters and Channel Islands D-200 MKII 2 Class D monoblocks ($3500/pr.) on the woofers. The preamp was Purity Audio Design's Ultra GT ($53,000) with a new Your Final System HD Reference 3 ($14,500) music server/player and an EMM Labs DAC2X ($15,500) as source. Cables were VSA Masterbuilt, and stands and racks were from Critical Mass.

I stayed in the room a long time and heard three different kinds of music, though none from my own demo CD. From the YFS server's computer files, I listened to a fast flamenco piece with an acoustic guitar and rapidly tapping boot heels that were clear and crisp and did not blur, then a jazz violin quartet playing a slow, sensuous version of Gershwin's "Summertime." Soundstaging was astonishing with a liquidinous, organic touch and great presence on these small-scale tracks. But the big room was pretty tough on a hybrid SACD of the Budapest Festival Orchestra performing the first movement of Mahler's First, conducted by Ivan Fischer. Though the trumpet fanfares were gorgeous and woodwinds rich and pure, violins sounded washy and timpani strikes a little boomy -- the latter was likely a room thing. It seemed to me the Kronzilla amp on the top-end drivers didn't have enough giddyup, or that the tweet and mid on the Universe needed more run-in. Someone may also have gone a little crazy with the array of six subwoofers dialed up too high. I'd like to hear what the VSA Universe can do after some run-in and on my own demo music next time, perhaps if VSA shows up at T.H.E. Show Newport in late May. 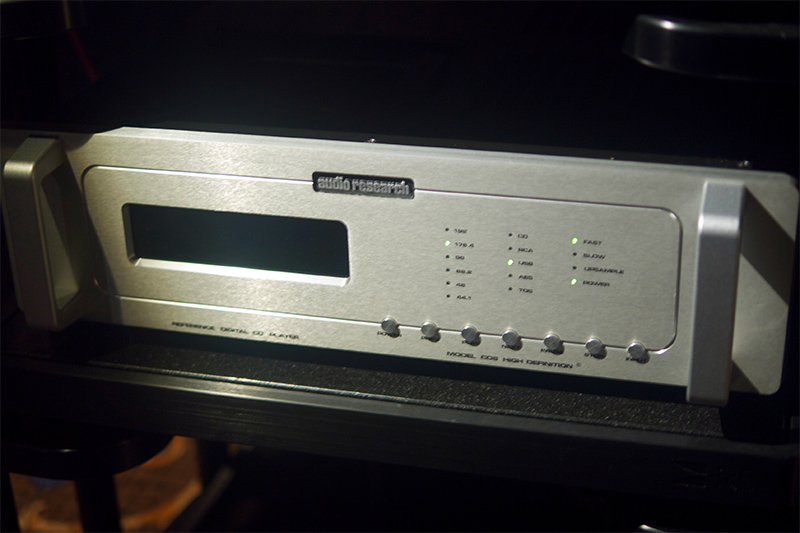 Quintessence Audio's large room on the main floor featured gear from the Fine Sounds consortium -- Sonus Faber Amati Futura speakers ($36,000/pr.), two REL G1 subwoofers, and source and electronics from Audio Research. Hooked up in a biamp configuration were two Reference 250 mono tube amps on the midranges and tweeters and two solid-state DS450M monoblocks on the woofers. The front end was the Reference 5SE preamp, and the source was the new Reference CD9 ($13,000), described to me as "essentially a DAC with a CD tray." The CD9 features 24-bit/192kHz capability via USB and its AES/TosLink/coax inputs, as well as selectable filters. Shown here in traditional ARC silver, it's also available in black. Playing the "Nimrod" movement from Elgar's Enigma Variations, the string sound was lovely, with a fine bloom from the double basses and a graceful movement to a full orchestral crescendo. 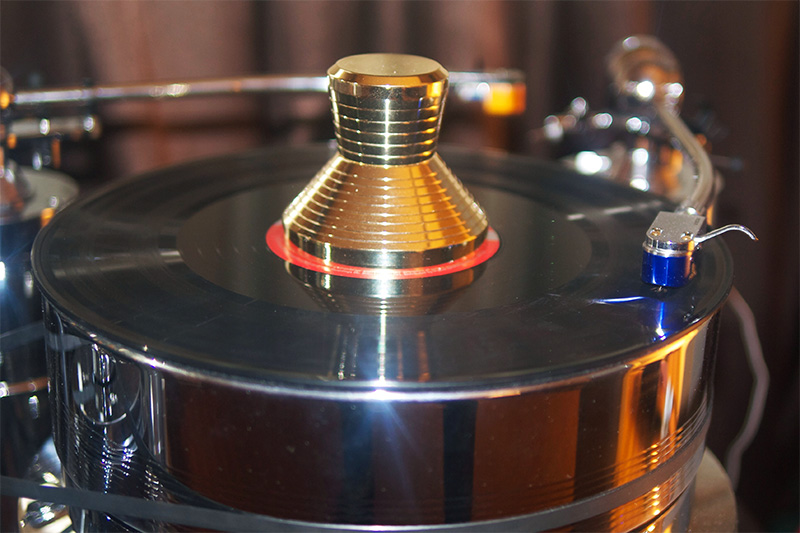 When I wandered into the all-analog room that KT Audio and Beauty of Sound set up on an upper floor, I heard Mendelssohn's Overture to A Midsummer Night's Dream performed by the London Symphony Orchestra with Peter Maag conducting. There was great dynamic range and speedy motif travel through the orchestra, though the sound was a bit tipped up to my ear, the violins slightly gray. The LP wasn't an original, but a re-pressing by ORG unfamiliar to me. But on For Duke, an M&K Realtime Records original, the solo instruments and orchestra just killed with great imaging and soundstaging. Featured in the system were a Triangle Art Signature turntable ($12,500), TubeGuru ECC808 MM/MC phono ($4400), Slagle silver-wired step up ($2500), and the new Kai cartridge ($10,000; 0.17mV) from Ikeda Sound Labs mounted on an Ikeda IT-407 12" copper-wired tonearm. 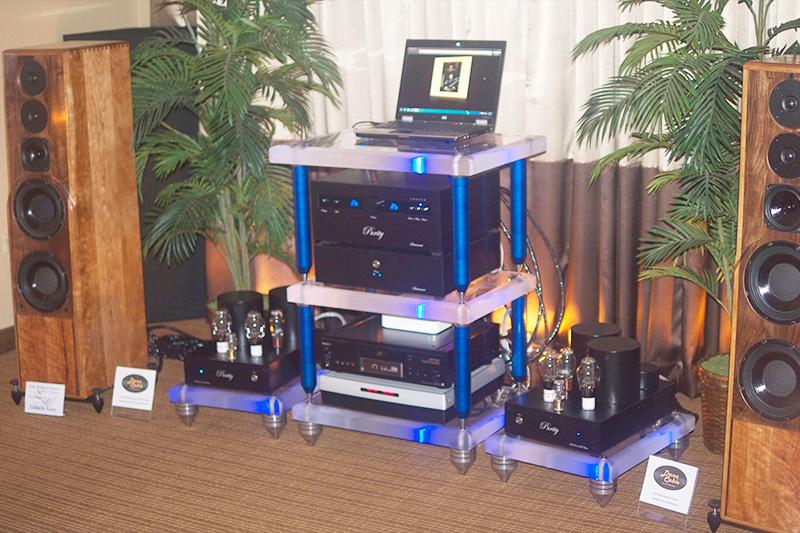 Purity Audio Design had one or another of its prized preamps in at least three different rooms, but in its own room it featured the debut of its new PSE 300B SET mono amps (est. $36,000/pr.). Also in the system were the Silver Statement Series II preamplifier ($32,000), a Playback Designs MPD-5 DAC ($13,000), a Sony XA77ES SACD/CD player acting as a transport, an HP Laptop music server running JRiver's Media Center 18, a Ball Tech audio rack and stands, and Argos loudspeakers ($13,000/pr.) by Daedalus Audio, a small manufacturer based in the Pacific Northwest. Signal cables were from Gingko Audio and power cables were from WyWires. From my own demo CD, I heard good orchestral weight, pure arpeggios and crystalline trilling, and a very balanced presentation on Beethoven's Piano Concerto No. 4 performed by Ivan Moravec with the Orchestra of the Vienna Musikverein. The system did seem to lack some speed and the larger range of dynamic expressiveness that I get from push-pull and solid-state amps, however. But on smaller-scale music like a digital file of "This Masquerade," as sung by George Benson on his Breezin' album, there was a fine pacing, along with sweet details of bells and claves mixed into this plaintive Leon Russell ballad. My conclusion? These Purity SET monos were meant for lovers of the 300B sound -- sensuous intimacy sí, music of a grand scale no. 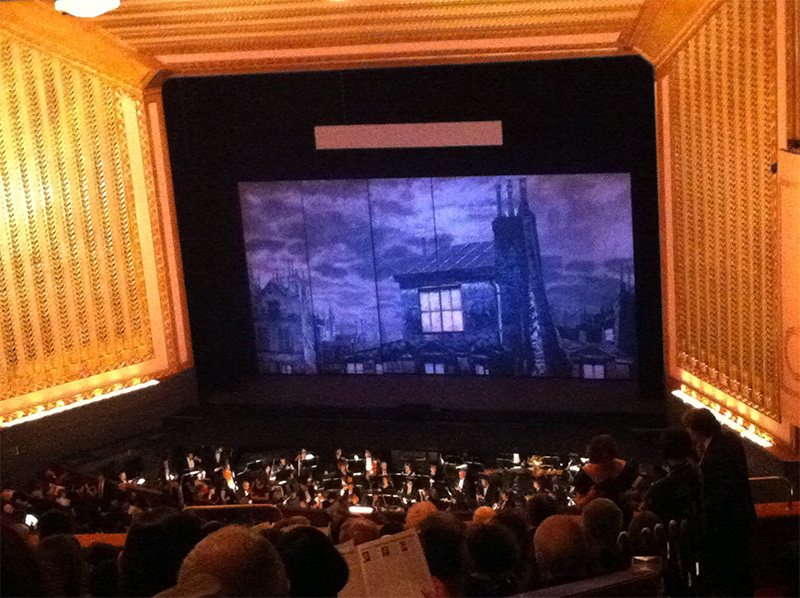 A night at the opera

And the opera? Well, I finished up early on Saturday around 5 o'clock, walked a few long and lousy blocks through the grey weather, and hopped on the Blue Train downtown. It took me about 25 minutes. I cabbed from the station to the Chicago Civic Opera building and got to my first-balcony seat with about 15 minutes to spare until curtain. What can I say? The opera, about young artists scuffling on the Left Bank in Paris during the mid-1800s, was everything I'd hoped for and more. Netrebko made for an all too lovely Mimì, looking more robust and busty than frail and consumptive as the role calls for, but she sang so gorgeously, with a plushness to her high notes that belied the slight wiriness I hear in her recordings, that I just did not care. Though the distance from the stage to me was about that from the right-field wall to home plate in Wrigley Field, I thought I heard every precious note of "Me chiamano Mimì" as she sang her opening, gently declarative aria. And Calleja was fantastic as Rodolfo -- burly, with a gleaming top to his tenor voice that cut like a brilliant comet through the hall whenever he sang. His opening aria, "Che gelida manina," sung has he takes Mimì's hand in his in his freezing apartment, is an anthem to love, poetry, and survival through tenderness rather than ferocity. There is just too much to say about it.

When I came back after the show, I ate a wondrous 10-oz. medium-rare tenderloin at Gibsons Bar & Steakhouse next to the hotel for all the calories I spent crying through the music.