Like the Montreal Audiofest, TAF is produced by Michel Plante and Sarah Tremblay. The 2020 editions of both shows were canceled because of the COVID-19 pandemic—so was the 2021 edition of the Montreal show.

Encouraged by Ontario’s declining case numbers and high vaccination rates, Plante and Tremblay began thinking about reviving the Toronto show in late August, and they started canvassing exhibitors. The response was encouraging. The Westin Toronto Airport hotel, where the show is held, had been “on standby for many months,” Plante said. 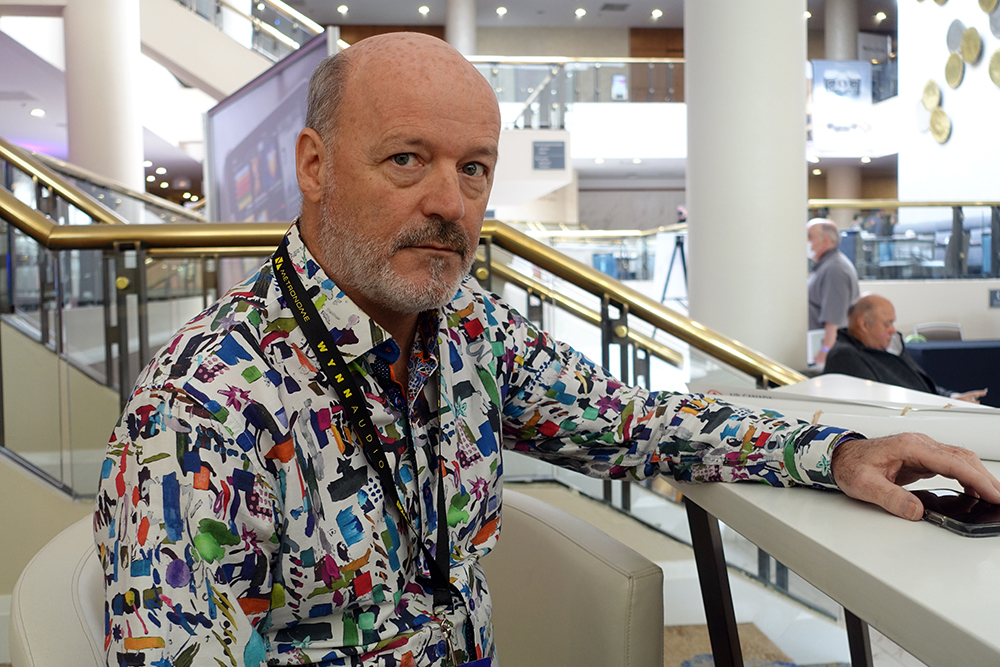 In late September, when two important exhibitors backed out, Plante and Tremblay worried that they might be unable to proceed. Because they had not produced any shows for the past two years, they would not be able to absorb hotel and related costs if the show were canceled at the last minute, or if not enough exhibitors signed on.

Happily, there was enough support for Plante and Tremblay to announce on September 27 that Toronto Audiofest was back. But it would be a different kind of show. All visitors and exhibitors had to be masked and maintain social distancing. And they had to provide proof of vaccination to be admitted to the show.

Not surprisingly, crowds were sparser than in previous years, but the event still had lots of energy. Show organizers were cautiously hopeful that total attendance would hit 1300 for the three days. They hit that target at 1:30 p.m. on day two. 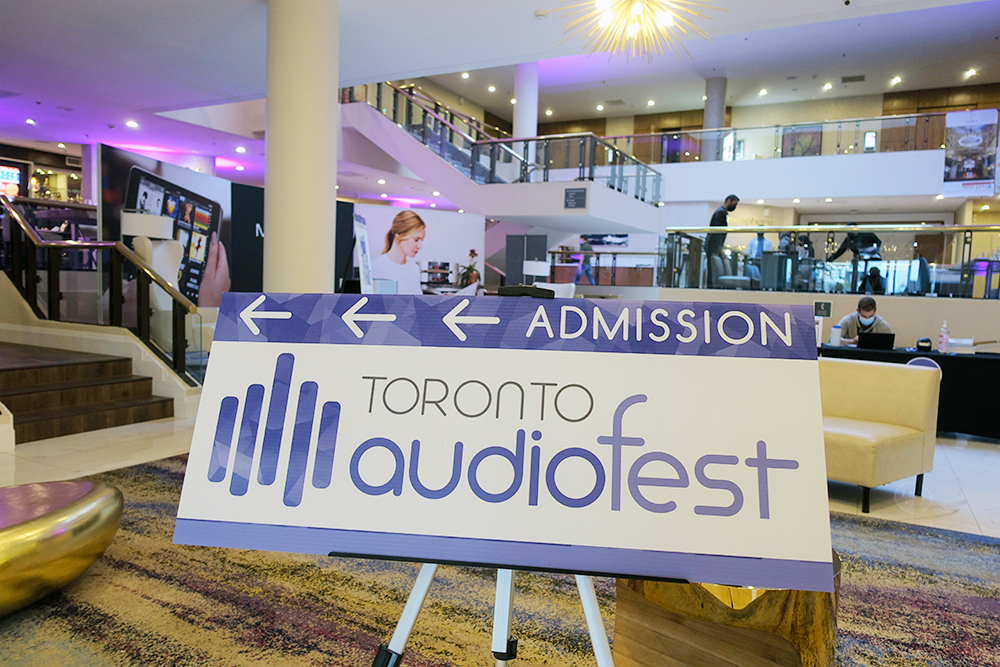 Of course, the show was much smaller this year. It occupied exhibit rooms spread out over two floors, plus several hotel rooms on the third floor and a suite on the 15th floor. I’d estimate that it was one-third the size of the 2019 show.

But there was still plenty to see—and hear. Given the fact that Toronto Audiofest 2021 was the first audio show held in Canada since the onset of the pandemic, it’s not surprising that there were several products making their Canadian debuts, and in a few cases, their worldwide debuts. Those new products are the subjects of this report.

Kennedy Hi-Fi, a retailer in Markham, ON, a suburb northeast of Toronto, had two rooms at TAF. In one room, it was demonstrating PSB’s new flagship speakers, the Synchrony B600 standmount ($3499/pair; all prices CDN except where noted) and T600 floorstander ($10,999/pair), powered by the NAD Masters M33 streaming integrated amplifier ($6999). Following a two-year-long development process led by PSB founder and chief designer Paul Barton, the Synchrony series was announced in April. The B600 and T600 have been in select dealers for about one month now; this was their first public showing. 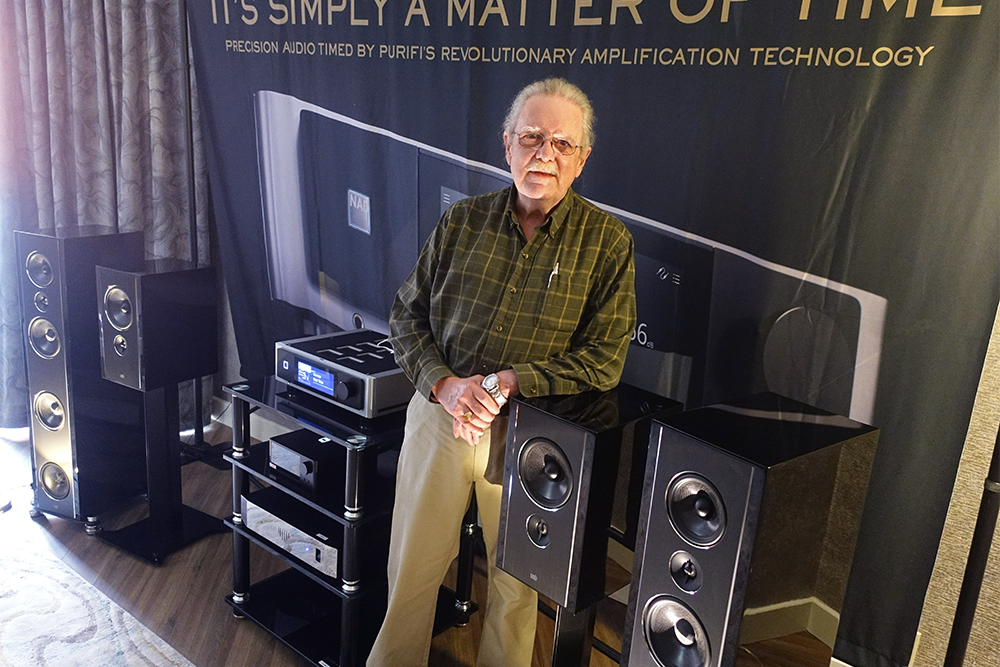 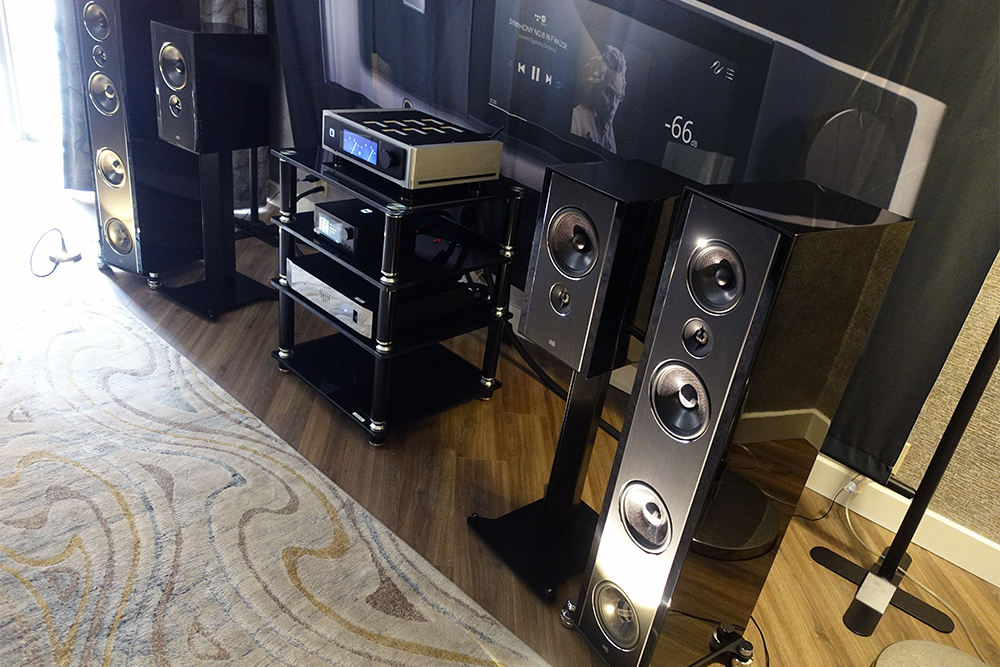 The front baffles are clad in 5mm-thick aluminum plates, which are suspended between the sidewalls of the enclosure by small isolation cups. This decouples the baffle from the enclosure and suppresses “baffle talk” for improved fine detail, per PSB. Diego Estan has a pair of Synchrony B600s in for review, so you can expect a full write-up on SoundStage Hi-Fi soon. 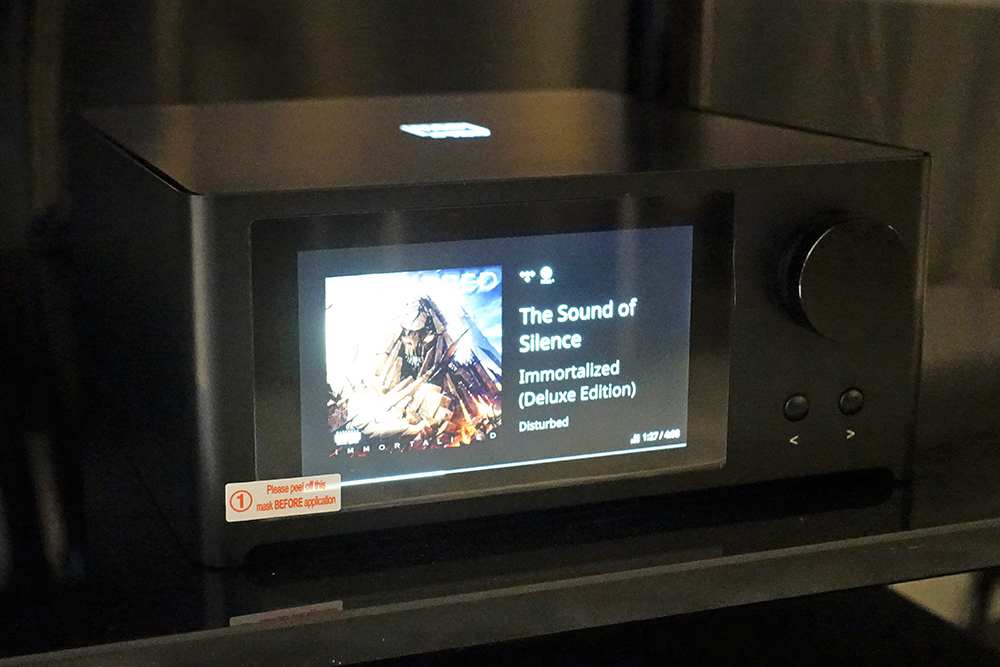 Kennedy Hi-Fi also had the brand-new NAD C 700 streaming integrated amplifier ($1999) on static display. The compact amplifier has a built-in BluOS-enabled network streamer; 5″ color display that shows album art, track progress, and system settings; and HybridDigital UcD output stage that delivers 80Wpc. The C 700 was announced on September 30, and shipments are slated to begin in late October, i.e., right about now. A review sample landed on my doorstep the day after the show closed. You can expect a full review of the C 700 on Simplifi in December.

In its second room, Kennedy Hi-Fi was demonstrating a system that in some ways is a complete antithesis to that NAD/PSB system: a pair of Klipsch Forte IV ($6600/pair) speakers driven by a Fezz Audio Mira Ceti ($4400) single-ended class-A tube amplifier rated at 8Wpc. The Mira Ceti uses two 300B output tubes and two 6SN7 preamp/driver tubes. Despite its modest output, the Mira Ceti delivered very satisfying output levels through the Klipsch speakers, not surprising given their extremely high sensitivity: 99dB/2.83V/1m. 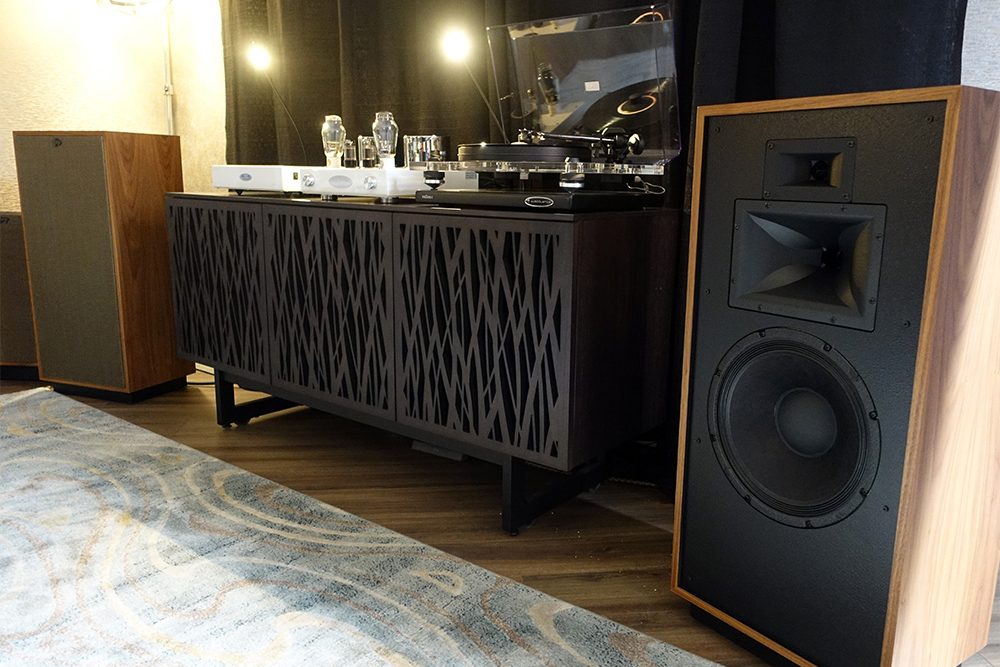 The Forte IV was announced back in February, but TAF marked its first public showing in Canada. It employs a horn-loaded midrange and tweeter, both with newly designed titanium compression drivers, matched to a 12″ front-mounted woofer, supplemented by a rear-mounted 15″ passive radiator. Each pair of speakers has grain-matched veneer panels harvested from the same timber. In addition to the Natural Cherry version on demo at TAF, Klipsch also offers the Forte IV in American Walnut, Black Ash, and Distressed Oak finishes.

During the show, Totem played scenes from Mad Max: Fury Road. Through the Kin combo, these dramatic scenes sounded effortless and thunderous but also clear and spacious. 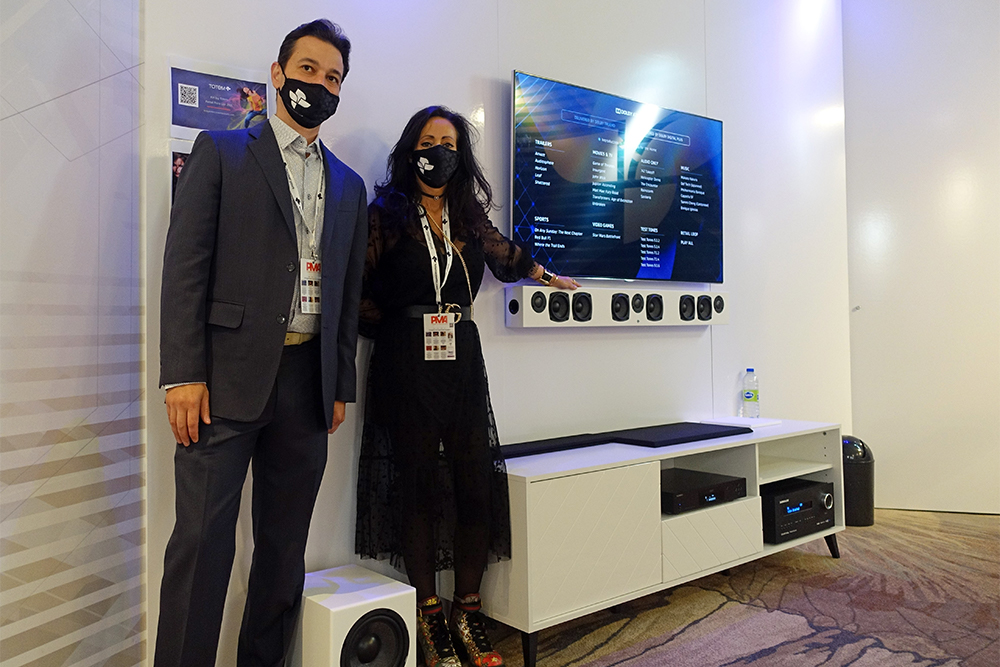 Measuring 47.25″W, the Kin Force soundbar is designed to be placed below or above TVs 55″ and larger. For each of its three channels, the Kin Force has two 4″ MHEX midrange-bass drivers with cones made of multiple layers of phenolic honeycomb and woven synthetic fibers, and one 1″ titanium-infused soft-dome tweeter. 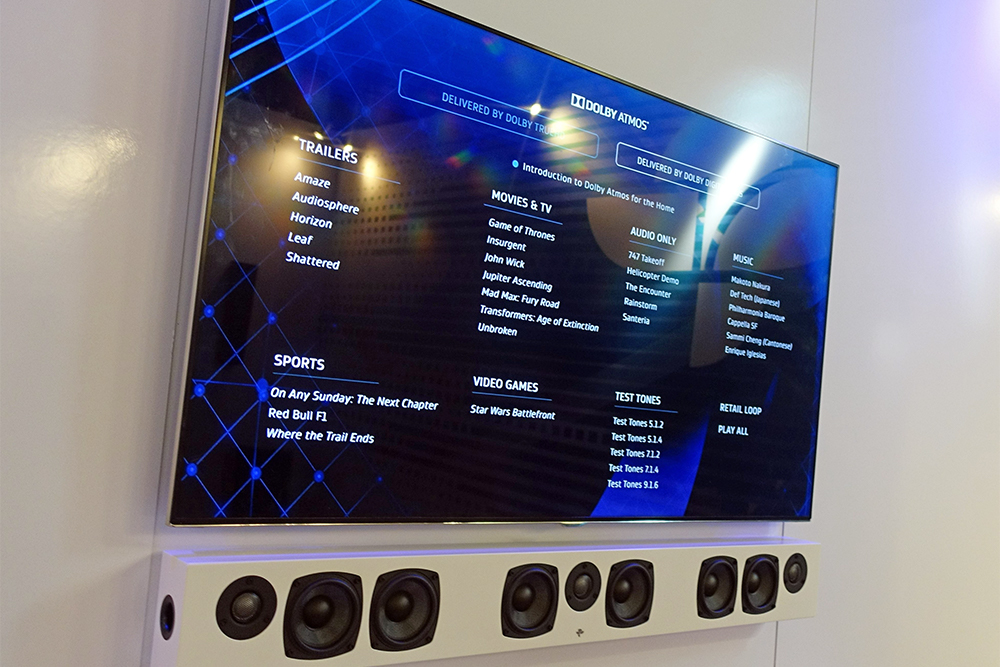 Replacing the Tribe 1 on-wall speaker, the Kin Solo can be used for the surround channels, which is how Totem demonstrated it at TAF. But two or three Solo on-walls can be used for the front channels, instead of a soundbar. In vertical orientation, the Solo is 27.6″ high, making it suitable for mounting alongside TVs 55″ and larger. Each Solo enclosure houses two 4″ MHEX midrange-bass drivers and one 1″ titanium-infused soft-dome tweeter.

The Sub 8 has an 8″ driver with a cone composed of spun fiberglass strands bonded to a cellulose core, which is terminated in a butyl rubber surround that allows very high excursion. It’s powered by a 200W class-D amp. The Sub 8 has LFE and RCA stereo inputs. The crossover frequency is adjustable from 40 to 120Hz at 24dB/octave.

All three models are available in Satin White or Satin Black finishes, and they come with magnetic grilles. The Kin Force and Kin Solo ship with adhesive feet and wall brackets, and the Kin Sub 8 has antiresonant feet.

Rather than showing its freestanding electrostatic or Motion-series dynamic loudspeakers, MartinLogan demonstrated the massive Statement 40XW in-wall line-array speaker ($29,000 each), in a system that also included the STR preamplifier-DAC ($5249) and STR power amp ($7799) from sister-brand Anthem. The speakers were announced at CEDIA in 2019, but Toronto Audiofest marked their Canadian launch. 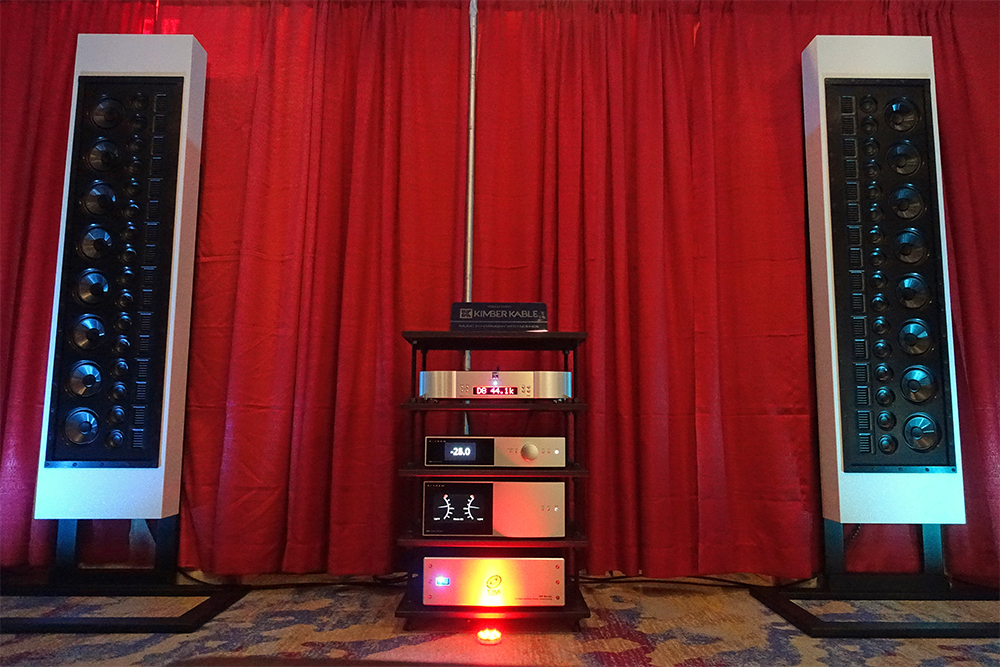 Each Statement speaker comprises eight 6.5″ woofers and 16 3.5″ midrange drivers, both with unidirectional carbon-fiber cones, along with 16 Folded Motion XT tweeters. The total radiating area is approximately the same as MartinLogan’s Renaissance electrostatic speaker, I was told. And the large number of drivers means they can achieve extremely high SPLs with low driver excursion. 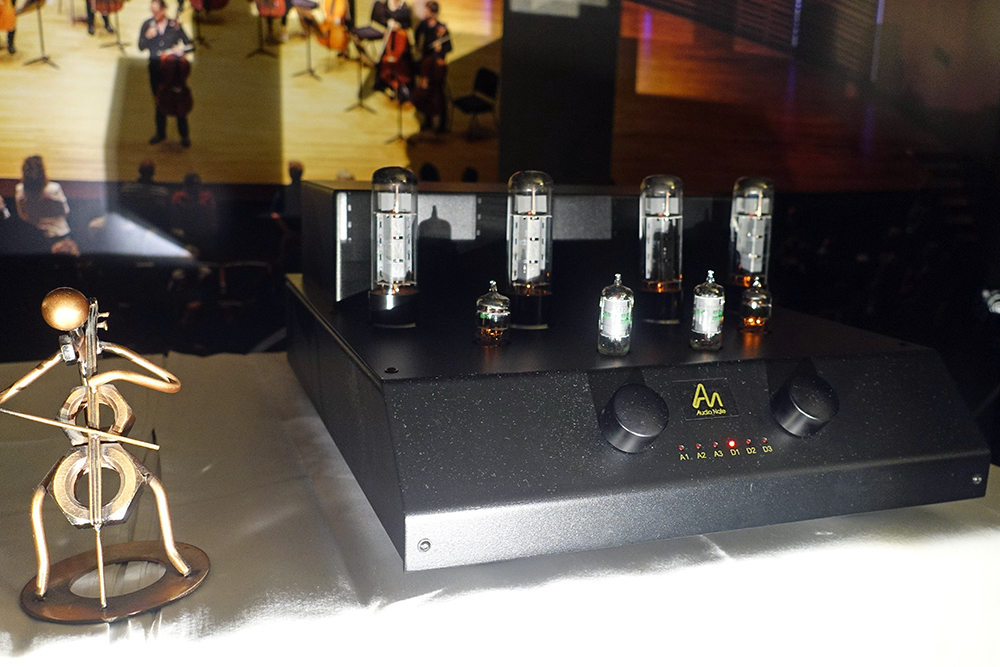 Launched in 2020, but shown publicly in Canada for the first time at TAF, the Cobra ($6795) is Audio Note’s first and only amplifier with built-in DAC. The Cobra uses a pair of EL34 tubes operating in class-A push-pull mode for each channel, and has a rated output of 28Wpc. In addition to three line-level analog inputs, the Cobra has a USB Type-B input, plus coaxial and TosLink S/PDIF inputs. The digital section is built around a Philips TDA1543 16-bit DAC. 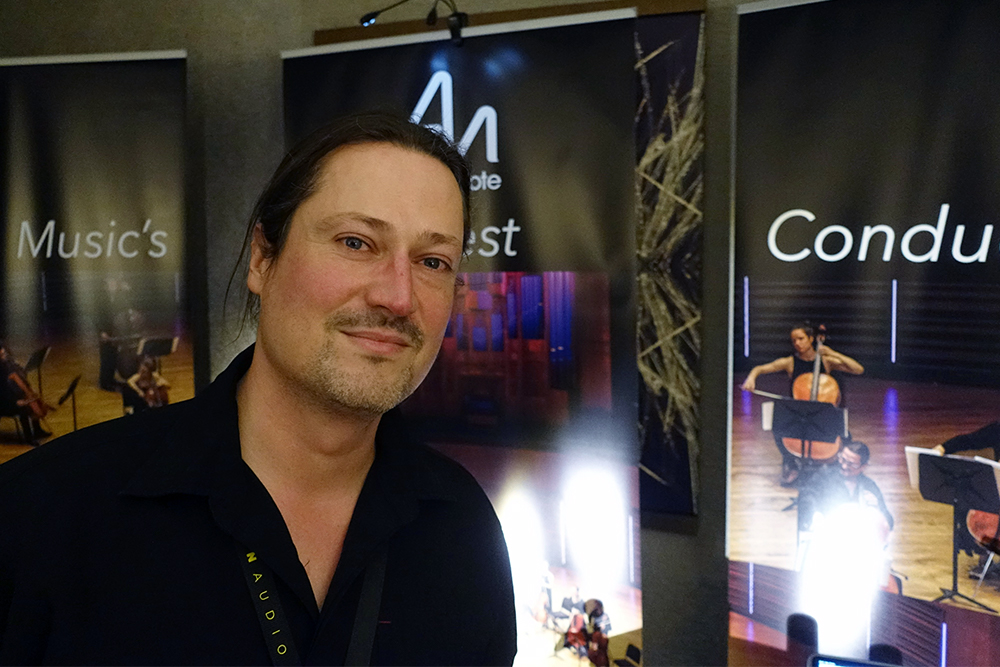 Also shown for the first time in Canada was a new version of Audio Note’s Type K standmount speaker with a slate-covered enclosure ($8995/pair). The Type K is a two-way sealed design with an 8″ paper-cone woofer and 1″ silk-dome tweeter.

In addition to its highly regarded stereo DACs, Toronto-based exaSound has long offered eight-channel DACs for use in surround systems. During Toronto Audiofest, exaSound founder and president George Klissarov demonstrated the new s88 eight-channel streaming DAC ($6499 USD) in a system with Krell amplification and Gershman Grande Avant-Garde speakers. There was no surround demo. The company wanted to show that the s88 can also be used for straight stereo, Klissarov said. Given the small size of the third-floor hotel room, it would probably not have been practical to conduct a multichannel demo. 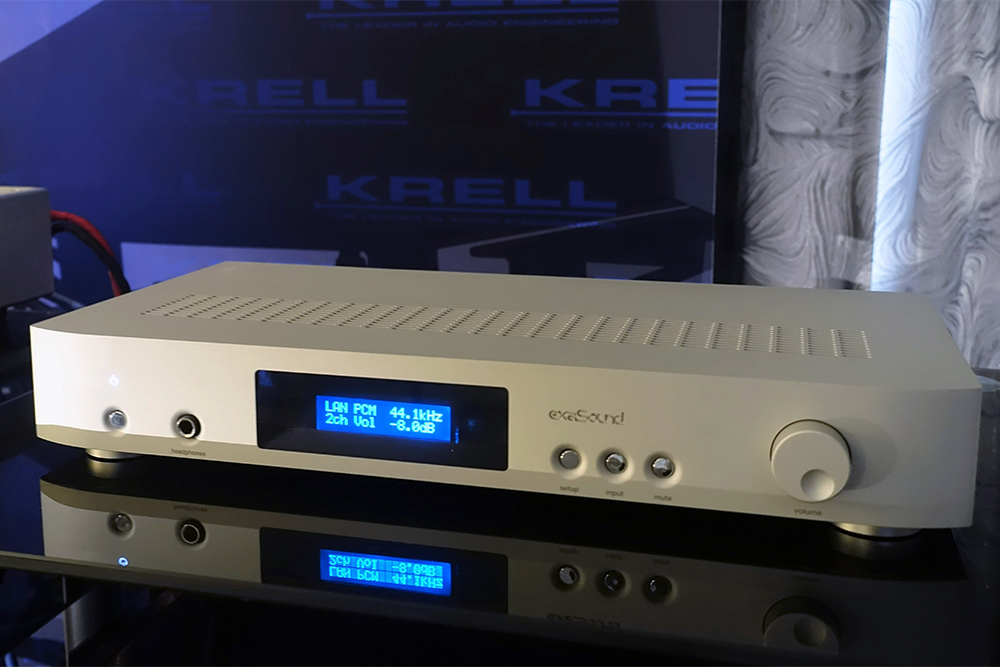 The s88 is Roon Ready, and it supports Apple AirPlay, Signalyst HQPlayer, and UPnP/DLNA. For local sources, it has coaxial and TosLink S/PDIF inputs and a USB input. Maximum resolution via USB and network is 32-bit/384kHz PCM and DSD512 in stereo mode, and 32/384 and DSD256 in multichannel mode. You can connect a USB drive to one of the s88’s USB Type-A ports and control playback with a UPnP app like mConnect. The s88 has eight XLR balanced and eight RCA single-ended outputs, as well as a hardware volume control, so it can be connected directly to a power amplifier. There is also a built-in headphone amplifier that exaSound says can drive demanding low-sensitivity, low-impedance ’phones.

In Simaudio’s 15th-floor suite, Costa Koulisakis, the company’s director of training, was demonstrating the 40th-anniversary edition of Simaudio’s Moon 600i v2 integrated amp and Moon 680D streaming DAC-preamp; sound came from Dynaudio’s flagship floorstanding speakers, the Confidence 90s. Simaudio actually marked its 40th anniversary in 2020, but the pandemic limited its opportunities to celebrate the occasion. 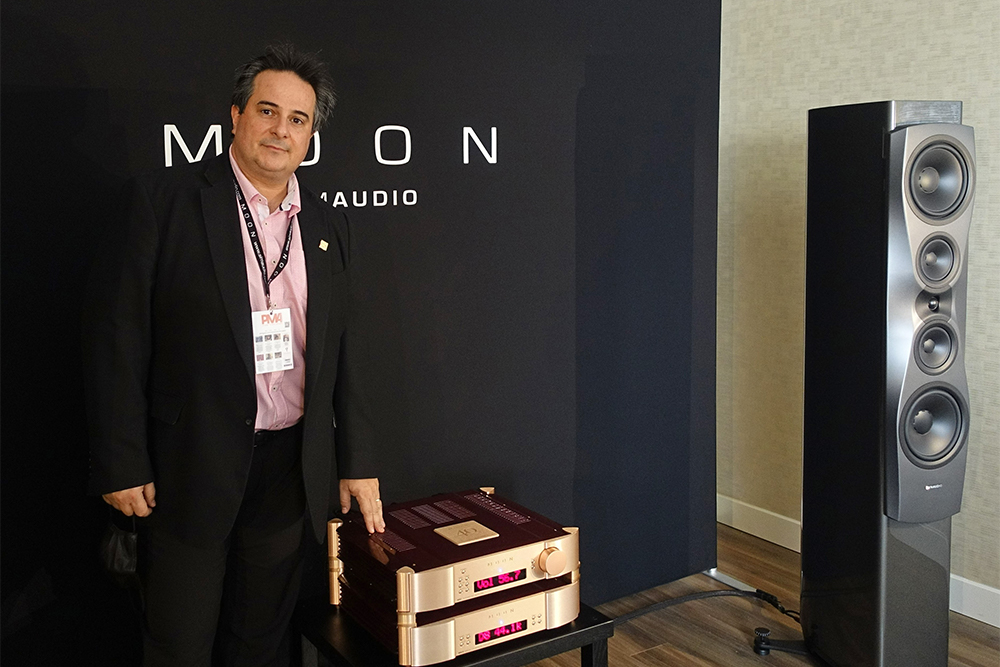 The special-edition components are being sold as a set for $38,000, and they include premium balanced interconnects and power cords manufactured for Simaudio by UK-based Studio Connections, a road case, and a set of Moon bridges, which are couplers that tie the two components together. The components feature a unique finish, with a rose-gold front panel and Millesmine Red casework. Only 40 sets are being manufactured; most have already been sold, Koulisakis said.

When I visited Simaudio’s suite, Koulisakis passed along the sad news that the company’s president, Louis Lemire, had died on September 23 after a short illness. He was 55. Lemire acquired a majority stake in Simaudio in 2013, partnering with Koulisakis and Thierry Dufour, Simaudio’s director of engineering. Koulisakis told me that he and Defour have assumed ownership of the company, and it will continue under their leadership.

With the pandemic loosening its grip on our lives, we can look forward to more audio shows. Plante confirmed that the Montreal Audiofest is definitely a go. It will be held March 25 to 27, 2022, at the Hôtel Bonaventure. I’ve already put it in my calendar.

Plante and Tremblay are expanding their focus southward. They’re collaborating with the Los Angeles and Orange County Audio Society to present AudioCon Los Angeles, which is running January 14 to 16 at the Hyatt Regency Newport Beach.